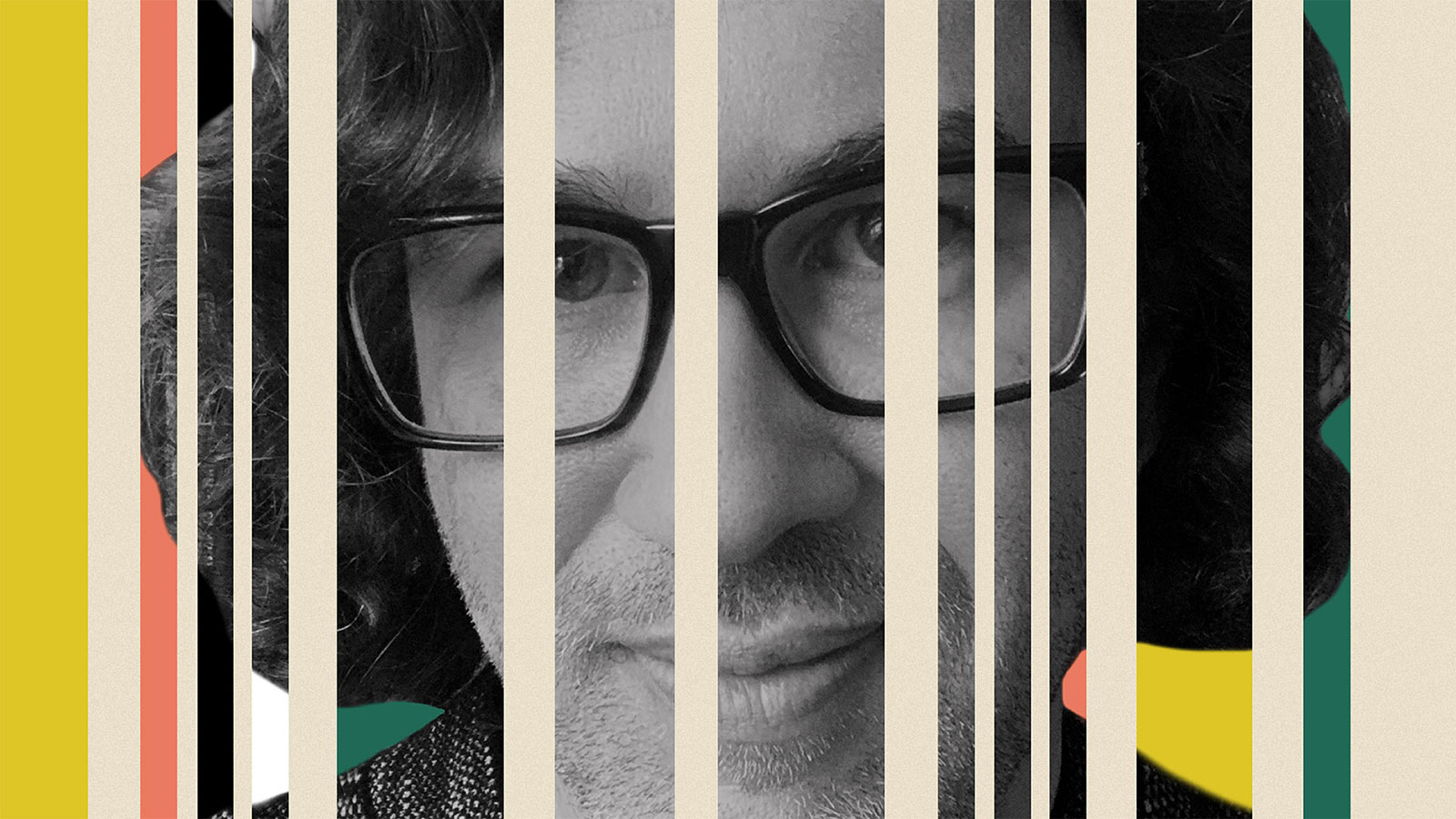 Jason Feinberg is a music fanatic, marketing executive, software engineer and maniacal vinyl collector. He has spent his career leading music and technology marketing teams big and small. Early days at independent record labels such as Nitro, Concord, and Epitaph taught him how to market; executive roles at Pandora and Universal Music Group taught him how to lead. He currently works as SVP, marketing at Flymachine, a music-tech startup focused on the intersection of virtual social experiences and livestreaming.

We caught up with Jason for our Liner Notes series to learn more about his musical tastes and journey through the years, as well as recent work he's proud of and admired.

Born in South Carolina. I had a nomadic youth, living in six states by 12 years old. Formative years were in Las Vegas. Been in Los Angeles for 21 years, currently living in Marina Del Rey.

When I was six years old my grandmother bought me a turntable and two 7"s—"Hound Dog" by Elvis Presley and "I Love Rock 'N Roll" by Joan Jett. I couldn't quite understand how, no matter what time of day, when I dropped the needle the band was ready and available to play for me. Plus, Elvis was dead. Ahhh, the innocent idiocy of youth.

KISS in Orlando, Florida, when I was 12 years old. What an incredible entry into the world of rock n roll. The loudness, the pyro, the spectacle, the chest hair… Been a fan ever since, and getting to work with them at UMe was a career highlight. I've seen them in venues big and small all over the world, as well as on a cruise ship in the Gulf of Mexico.

Dead Kennedys. The band that really changed it all for me. When I was 11, a much cooler older kid played "Plastic Surgery Disasters" for me and a punk rock counter-culture damn-the-man beast was unleashed. Their scathing wit and politics shaped my world view, which sadly has proven truer and truer as time has gone on.

Charles Bradley (RIP). I'm not sure any other artist stirs my soul the way this man does. He was someone who took a lifetime of pain and struggle and simplified it like few others could do. His wounded smile and the deep lines on his face convey a thousand tales of sorrow and joy and longing and love. I was fortunate to work with him a few times while at Pandora, and his childlike wonder and appreciation that we cared moved rooms of otherwise hardened people to tears.

My primary music delivery vehicle is, has always been, and I assume always will be, vinyl. I'm a maniacal record collector, with a house-overtaking collection of punk, metal, goth, jazz, hip hop, rock, indie, soundtracks and so much more. I buy stacks and stacks of vinyl every chance I can get, and I test the limits of eBay and Discogs on a regular basis.

In the moments where vinyl isn't an option, I find myself dashing from streaming service to streaming service, leaning in and leaning out, seeking the new and obscure, or reveling in nostalgia. I can't consume fast enough. If I only had a few more pair of ears so I could listen to more music simultaneously.

The Greek Theatre in Los Angeles is pure magic. It was holy to me before ever setting foot inside, growing up on Neil Diamond's Hot August Night, which was recorded there. I've seen some of the best shows of my life on those hallowed grounds, not to mention now being able to see the future after shaking Robert Plant's hand backstage.

Without a doubt, “Hurt” by Johnny Cash. An incredible song and cover. A frail old man juxtaposed with his younger, vibrant self, the look of love and sadness on June Carter Cash's face (a mere three months before she passed away), the decaying fruit and flowers and the disrepair of meaningful places… And Johnny would be gone only seven months later. I go to the Johnny Cash museum whenever I'm in Nashville, and when I get to the end where the video is playing over the empty chair, I fight the tears (and lose) every time. If I watched this back to back with Charles Bradley "Changes," I would never recover.

Hijacking the question and going with movie on this one. Empire Records. I was a college radio music director working at a record store when I went to a screening of this at CMJ in 1995. It was transformative, realizing that there were enough other weirdos living this same life that they made a movie about it! Add an appearance by GWAR and a conversation about Henry Rollins and The Misfits, and I knew I had found my people. Many years later I became friends with the writer Carol Heikkinen, and getting to fanboy out on her was such a cool full-circle thing.

But if I had to go with a podcast, it would be Broken Record. I could listen to Rick Rubin talk about anything with anyone.

At Flymachine we recently launched a 1:1 meet-and-greet product to supplement the experience and cashflow of artists doing virtual events with us. It immediately began putting money directly into pockets of musicians at all levels.

I've spent much of my career in and around the d2c/ecomm space and have always been aware of the power created when technology meets fandom. This is a prime example of how artists can directly monetize the hard-earned audience they have fought to build and need to constantly maintain. Creating heightened revenue possibilities for artists and coupling it with the pure joy of a fan getting 1:1 time with a musician they love gives a peek into how the music economy continues to evolve. Proud to be a part of it.

So, so, so many. But to not make this answer 10 pages, let's focus on the man with the greatest overlap of intelligence and creativity in the entire music industry, Lee Martin. Go to his site, close your eyes, swipe up, then randomly tap any project he's ever done.

Be crystal clear on the value you bring to the partnership, and the highest value you can extract from it. If the leverage is in equilibrium, both sides stand the greatest chance of success. Sometimes all the brand needs from you is association—but if you can develop ways to deeper the value you bring, they can find ways to deliver more value back than simply a paycheck or visibility. And above all else, partner with a brand you believe in. That's part of playing the long game, and your audience can feel if something is authentic or not.

Understand the artist's motivations and goals. They are rarely the same as yours, aside from perhaps making money. You have a lot of levers and dials—financial, audience, optics, access to other industries and networks, technology, data… Each of these can be valuable to different artists in different ways, and often more valuable than straight cash. Build out a holistic partnership that is more than a one-off and has multiple dimensions. It's a more definitive way to connect with your existing audience, and by far the best way to bring the artist's audience into your camp.

Deeply unite people, regardless of any other background or belief system. Music has fostered some of the most connected, joyful, meaningful experiences with people I otherwise wildly disagree with. It can remind us that we're all human, and 90 percent of what we care about is fully aligned and common ground. In the punk world I came up in, a lot of the music reminds you that your differences are mostly manufactured by someone somewhere with something to gain, and the real enemy isn't the person in front of you. Time to go listen to Minor Threat!

What you'd be doing if you weren’t in the music world.

Well, this is my retirement plan, so I’m putting it out in the universe. I plan to open a record store / coffee shop / speakeasy / pet adoption center. And as long as it breaks even, I can spend my days listening to vinyl, drinking coffee, making cocktails and connecting with animals that I can then help find forever homes. If that's not a perfect life, I don't know what is.