It was donated by gay and bisexual men

All told, 26 pints of blood were collected. Some of it will be exhibited today around London, with displays set up outside the Houses of Parliament and in other high-traffic locations such as Piccadilly Circus and Oxford Street.

The stunt aims to put pressure on the newly confirmed government and build public support for reversing the abstinence policy. 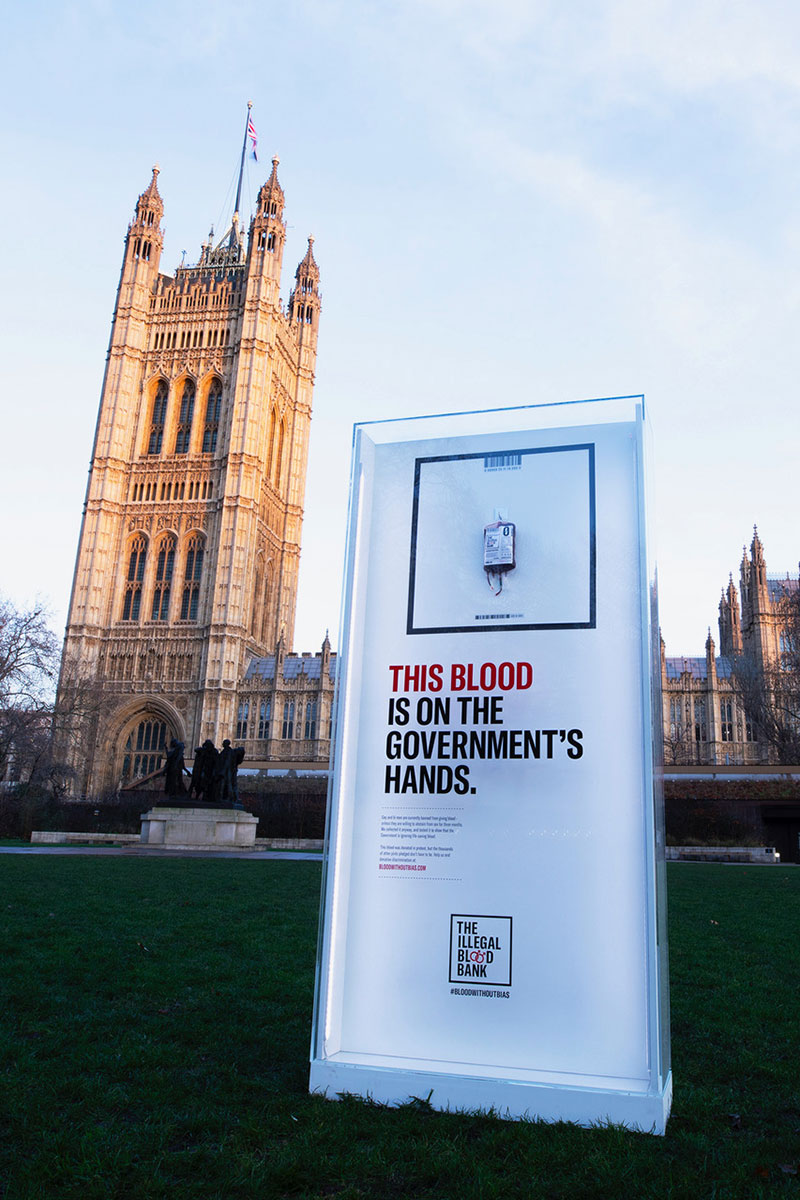 Each out-of-home placement includes a single bag of blood. The copy reads, "This blood is on the Government's hands. Gay and bi men are currently banned from giving blood—unless they are willing to abstain from sex for three months. We collected it anyway and tested it to show that the Government is ignoring life-saving blood. This blood was donated in protest, but the thousands of other pints pledged don't have to be. Help us end donation discrimination at bloodwithoutbias.com."

All donations to the Illegal Blood Bank were deemed safe, yet the law prohibits such pints from being used in medical procedures.

"We couldn't bear to see the donors' blood go to complete waste and were determined to do their protest justice by using it to make a statement that the government can't ignore," says Elvis associate creative director Rob Griffiths. "The perspex monoliths we've created work hard to give the blood the physical presence it deserves."

Achieving equality in the system, "where anyone who can safely donate blood is able to do so," is the overarching goal, adds Nick Hodgkins, marketing chief at LADbible Group, which owns Unilad.

The effort has generated considerable buzz, with the Illegal Blood Bank garnering 4.8 million impressions across Unilad channels. In addition, 60,000 people signed an online petition demanding a policy change, with gay and bi men pledging nearly 4,000 pints of blood to show they would donate if they could.

As the initiative launched in November, a representative for the National Health Service's Blood and Transplant division said the government would continue "working collaboratively with LGBT+ groups on blood donation." The rep insisted the NHSBT was seeking "an evidence-based approach to explore if a more individualized blood donation risk assessment can be safely and practically introduced, while ensuring the safe supply of blood to patients."