How Hip-Hop Changed My View on Creativity

Learn to use what's available, and make it yours

It's 1986. I'm a skinny 13-year-old white kid living in The Devil's Armpit, The Netherlands, and I'm surrounded by snack-bar life and mopeds. The only source of new music was the radio, which was predominantly rock and folk-oriented. Musically, I was bored as hell. But one Dutch radio show recognized the rise of a genre that had a different ring to it: hip-hop. Artists like BDP, Public Enemy and Eric B. & Rakim slowly made their way into record stores, and I fell in love with the genre straight away. My musical preference was considered a bit silly at the time. Hip-hop was perceived as superficial, aggressive and monotonous. Little did we know it would go on to become the most influential cultural movement ever, and the most listened to genre on Spotify.

Growing up, I was impressed with hip-hop's loudness and bravado, but mostly jealous of its brutal honesty. The music was funky, impact-driven and straightforward. The absence of musical education or instruments didn't get in the way of creativity, which is how the record player came to be an instrument in itself. Thomas Edison wouldn't keep his lunch down if he saw these guys at work. As a Dutch kid, I understood maybe half of the slang-ridden rhymes, but I felt the urgency in the subject matter. Rap was my news report on inner-city struggles in New York City and Los Angeles. The music just sucked me in.

The more I listened, I started recognizing patterns. Hip-hop producers dug into the record collections of their parents and found little pieces of rhythmic breaks they could isolate and re-use. The breakbeats were sampled, re-used, chopped to pieces and put back together again in unexpected ways. Producers like Marley Marl, DJ Premier and later RZA recycled superstars, rarities and obscure artists no one would have ever remembered. To this day, I'm still stunned that four bars of drum beats from the Winstons' "Amen Brother" defined the fabric of countless hip-hop tracks to come—NWA's "Straight Outta Compton" being one of the most notable. The breakbeat went on to kickstart a new genre: Drum & Bass. (Sparked your interest? Listen to this hypnotic contemplation about the Amen Break.) Amazing beats like James Brown's "Funky Drummer," Lynn Collins' "Think" and Skull Snaps' "It's a New Day" were sampled so often in hip-hop records that they became part of our collective subconscious.

When it comes down to it, the basis of sampling is copying. We've given the act a mostly negative connotation, yet we know it's an essential tool for survival. We see our parents and siblings do something—say, eating—and we copy it, learn to do it better, and pass the knowledge on to our offspring. The blueprint for sampling, therefore, is strikingly similar to that of evolution: We inherit, we shape to make it ours, and we create a new story.

Sampling is often considered lazy, cheap and even immoral by some. But this raises an important question: Does art have to be completely "new"? Poets use existing words to make great sentences. Bach used existing chords and time signatures. Ancient Romans admiringly "sampled" ancient Greek statues and put Roman faces on them. Warhol sampled Campbell's Soup. Lichtenstein sampled cartoons.

As a creative, the hip-hop mentality is what keeps me going: Use what's available and make it yours. Intensive and personalized molding and shaping of what you sample prevents your work from becoming a pastiche or blatant appropriation. Work your way around the naysayers and bullshitters, because nothing is going to stop creativity from happening. In my work, I sample all the time. I sample ideas, stories, shapes, colors and movements. I sometimes sample myself and call it experience (if you catch me doing that, just fire me).

When I find myself being slow, lazy or repetitive, I play some Rakim, Gangstarr or Ultramagnetic MC's to force myself toward the thrill of the unknown. To use what's there—ideally with a brief, a dream and a deadline—and make it mine. 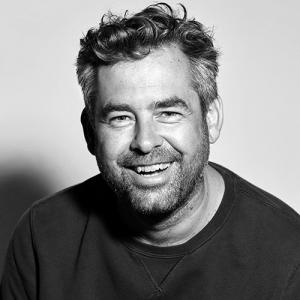