Björk, Guy Sigsworth and My Awakening to Choral Singing

A new path for my unusual, androgynous voice

Björk's Homegenic and Vespertine have this synaesthesia about them that I love—like I can smell spindrift coming off sea waves but at the same time be in the mad glittering night light. The music can go from vacuum-packed intimacy to full emotional roaring expanse. There is incredible detail and layering—but yet the sound of mechanism in how instruments like harpsichords and celestas are recorded.

They also marked a turning point for me in how choirs can be used in music. Up until then, choirs lived in a separate universe for me. There are these incredible Benjamin Britten, Arvö Partesque choral textures that just sit perfectly in the arrangements, like hand-painted backdrops. There is something of the trip hop sparsity of Portishead and Massive Attack but with the intricacy of Aphex Twin, and all with the sophistication of Messiaen.

On meeting Guy Sigsworth over 15 years ago and working with him in my late teens as a guitarist in Frou Frou (his duo with Imogen Heap), the extent of his influence on some of my favorite music, like Homegenic and Vespertine, began to unfold. Conversation with Guy can jump tracks from abstract physics to jumping around the studio, to Jungle, to Yma Sumac, to Okinawan music, to Bill Viola. In 2014, we began writing together.

In the seven years since then, Guy helped draw out the natural androgyny of my voice. We have written many songs together, three of which feature on his debut album Stet.

In our work together, he embraced the unusual, androgynous nature of my voice. I would sing incredibly long phrases in one breath at these super glacial tempos. It felt like microsurgery at times, up close and intimate.

Guy developed a writing method with me where we edited together long phrases of super airy vocals that were at that point impossible for me to actually sing in one phrase. But then over time I was able to do it, and now it feels like the most authentic "me" I can be as a singer and as an artist. 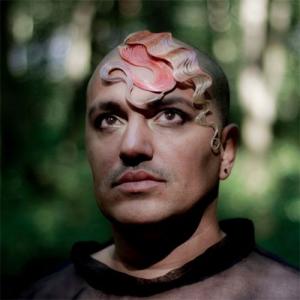