And then had a gift for them

There are only two reasons why you'd stay in the theater until the very end of closing credits after a movie. Either you're waiting for some goofy outtakes (which may or may not arrive), or you're a serious film geek.

Working with BETC and MK2 cinemas, they inserted some fake lines into the scrolling end credits of several films. And hidden inside the fake lines was little gift—rewarding the stragglers for their true love of movies.

Canal+ has always been committed to cinema. Its most famous piece of marketing—one of the great commercials ever made, also from BETC—starred a bear rug who dreamed of being a director as he lay watching movie after movie from his spot on the living room floor.

Marketers hacking end credits isn't super common, but does happen. One of our favorite examples came from Burger King and German agency Grabarz & Partner, which inserted the message "The Moral Is: Never Trust a Clown" into end credits of the horror movie IT. 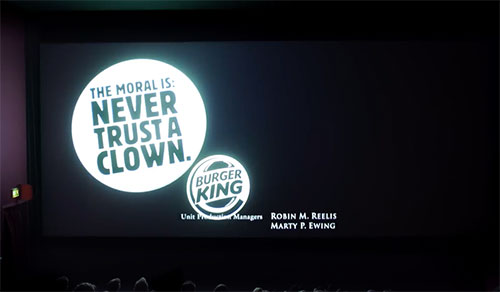