Wizard of Oz, The Graduate, Monty Python and more

Some movie posters wind up as iconic and beloved as the films they advertise. Such artworks offer visual commentary on popular culture, vividly reflecting the concerns, attitudes and obsession of their times.

Of course, remakes are a celluloid staple, and reframing lobby-card imagery through a modern lens can yield keen insights, along with delightful or even disturbing revelations.

Freelance marketplace Fiverr invited members of its global design community to revise 10 classic Hollywood posters for 2020. Those asks went out shortly after the coronavirus crisis began, though contributors were not specifically tasked with using Covid-19 as a reference point. The project serves as a sequel of sorts to Fiverr's spin on famous LP covers from last year.

"We carefully selected films from the birth of cinema to the present day, across a variety of genres," Fiverr brand vice president Duncan Bird tells Muse. Participants could focus on "a symbolic object from the film, a pivotal scene, a main character, or something else entirely," he says.

The processes yielded a range of interpretations. Some entries probe political, social and psycho-sexual depths—others are just plain weird.

This unsettling, post-modern take on The Wizard of Oz ranks among Bird's personal favorites—"an impressive piece unlike anything we had expected," he says:

The Wizard of Oz 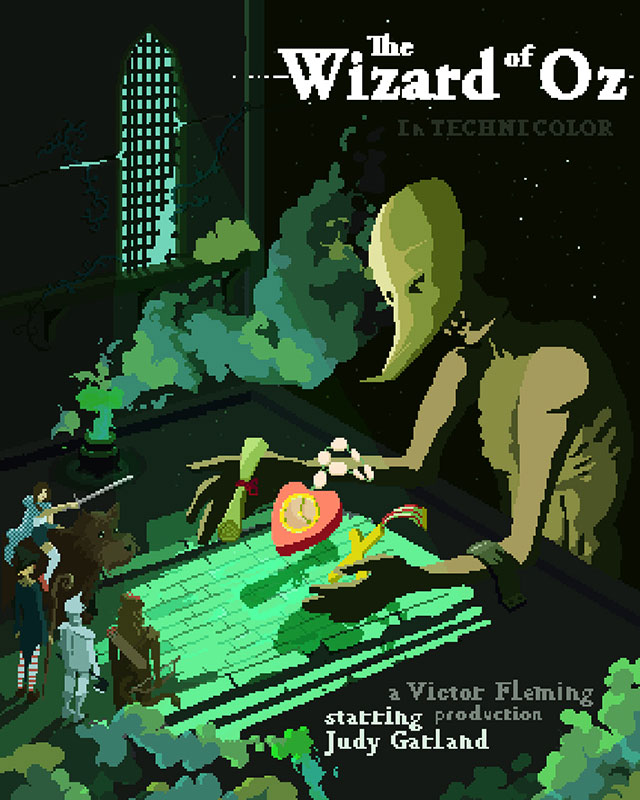 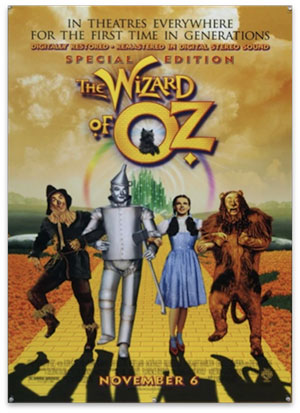 "Something I always go back to, personally, was how the Great Oz ended up being a con artist," designer Tamajoshi explains in commentary accompanying the piece. "The 'reward' he presents them with is metaphorical, and Dorothy's compassion is actually what helps them reach their true potential. My inspiration comes from me wanting to re-imagine the movie as a dark fantasy, and to have Dorothy look more powerful than she was originally portrayed. I mainly used the video game series Dark Souls as a style/concept reference. I am a huge fan of the Dark Souls franchise and wanted to pay homage to that as well."

An allegory for the Trumpian age? Let those with brains, hearts and courage decide.

Next on the bill: The Graduate, tweaked to accentuate loss of identity, a key theme in Mike Nichols' angsty 1967 social satire: 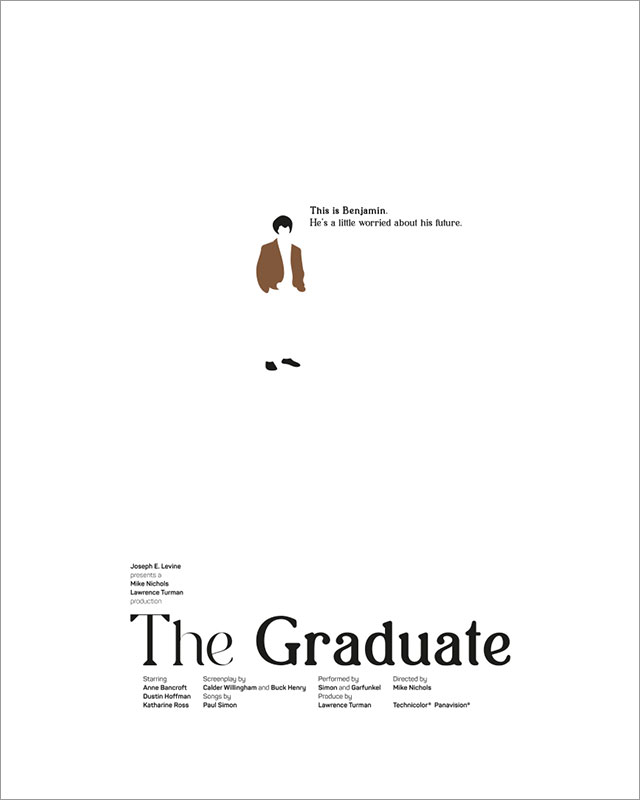 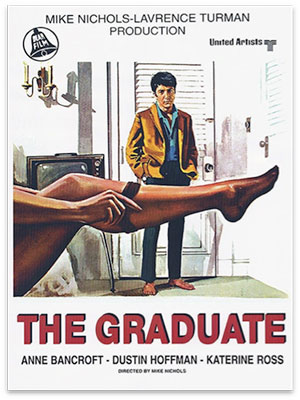 "The concept focuses on the protagonist Ben (the Graduate), who is questioning his whole life and the reality that surrounds him that no longer belongs to him," designer Andelby says. "As you can see, he is a character without a face and identity, because he has yet to find his way and fearful of the future."

All that white space suggests existential isolation. "Ben is wrapped in an asphyxiating society, by a corrupt and false nobility, by people who wear masks," the designer says.

Nowadays, millions of folks can relate to such tropes in ways the hippie-era filmmakers could never have imagined.

Any pretense to politics and sociology vanishes, however, in favor of fangs and fluff for this fun variation on 1975's comic masterpiece Monty Python and the Holy Grail:

Monty Python and the Holy Grail 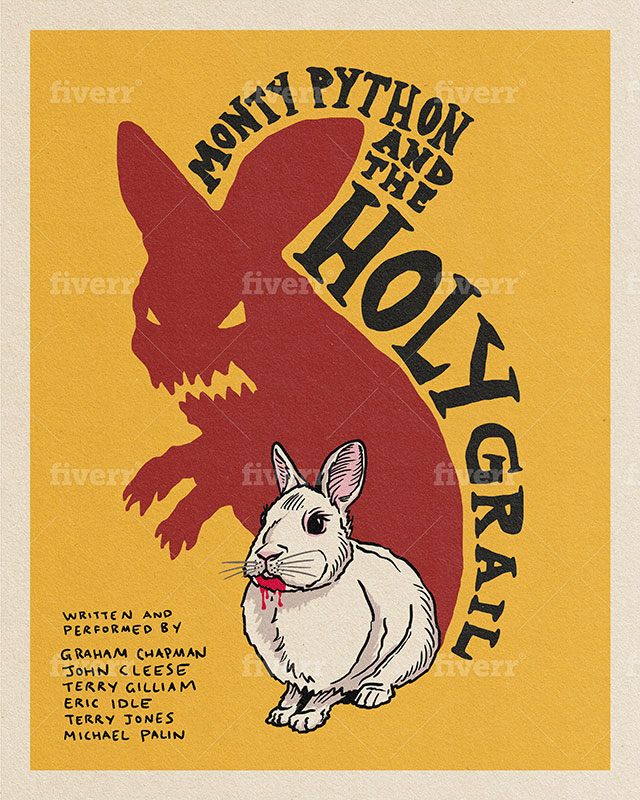 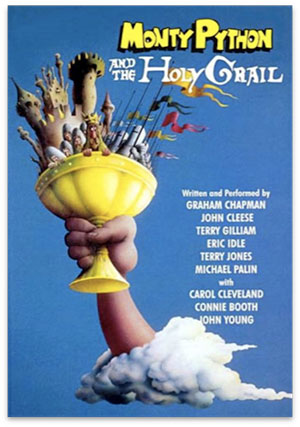 Simmering racism informed Spike Lee's 1989 dramedy Do the Right Thing. Today, such issues persist, and this poster amplifies that sad state of affairs:

Do the Right Thing 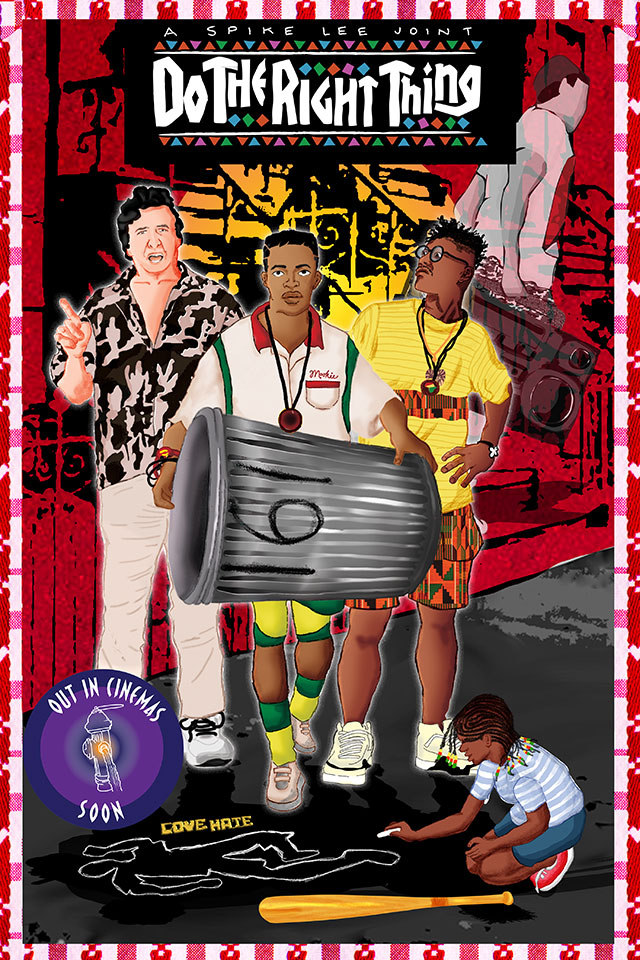 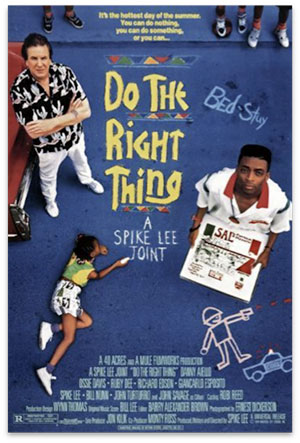 "The choice of the character Bugging Out and the ghost of Radio Raheem exiting the scene with his boom box seemed to add a more contemporary feel to the artwork for the poster," designer vivuwa says. "I retained the little girl on the ground and enhanced her cornrow hairstyle with beads, an accessory more appreciated in afro hair care today that it has ever been. Additionally, she has chalked out the silhouette of a dead man with Radio Raheem's 'Love' and 'Hate' rings on the ground to one side of her drawing, and a baseball bat on the other side."

As a whole, the project transcends most recent Covid-specific reboots, which seem content to add extra space symbolizing social distancing or slap masks on subjects' faces. Here, we see greater depth and broader perspective—vital, vibrant pictures that pose new questions with each viewing.

For Fiverr, showcasing the work on its social channel and website helps spread the word about the service.

Check out the rest of the posters below: 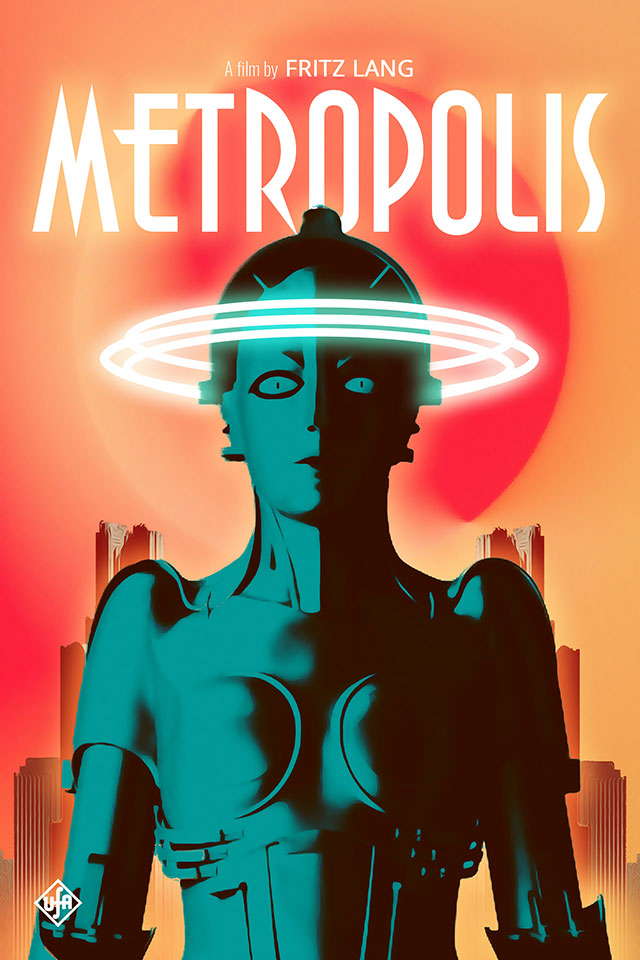 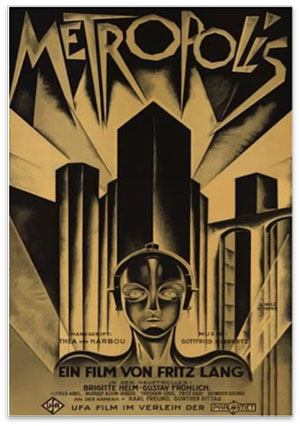 "One thing i liked about the original poster is simplicity of of it," says boxofwolves. "It's also quite striking. My idea was to update that poster with a slightly modern twist. I kept the minimalism aspect of the design, but added some color. One of my favorite scenes in the movie was the transformation. The halo effects used to illustrated the transformation process was pretty cool for the time this film came out. If this came out today, i think a cool neon effect would be make sense." 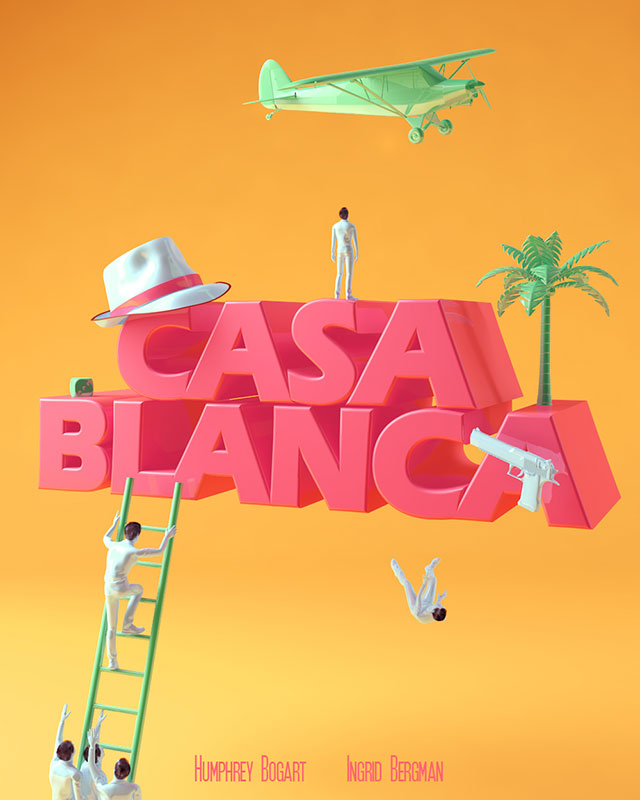 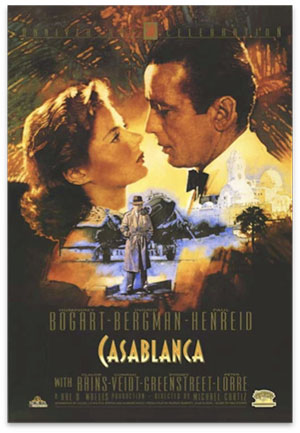 "As an artist who's based in Morocco, 200km away from Casablanca where the movie is taking place, I was amazed by story, people's lives and every aspect of the movie since I watched it for the first time," says chafisart. "I had so many ideas regarding the poster, but the story in movie and the characters seemed to be playing a game, the game of flying away from Casablanca for a better future, a game of conflict and hope as it's illustrated as toyish representation." 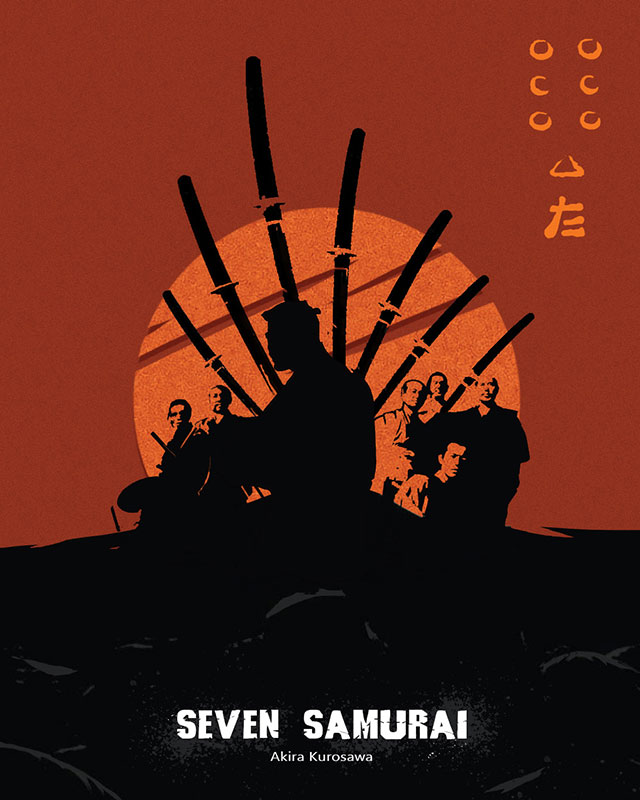 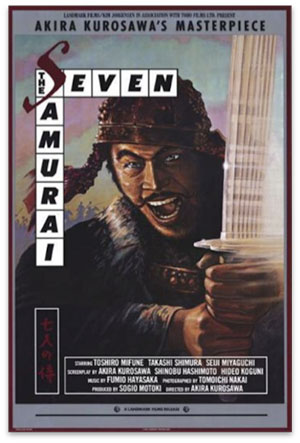 "I wanted to express their devotion and effort by the warm of the blazing sunset to represent the seven samurai with their swords," says shineunhye. 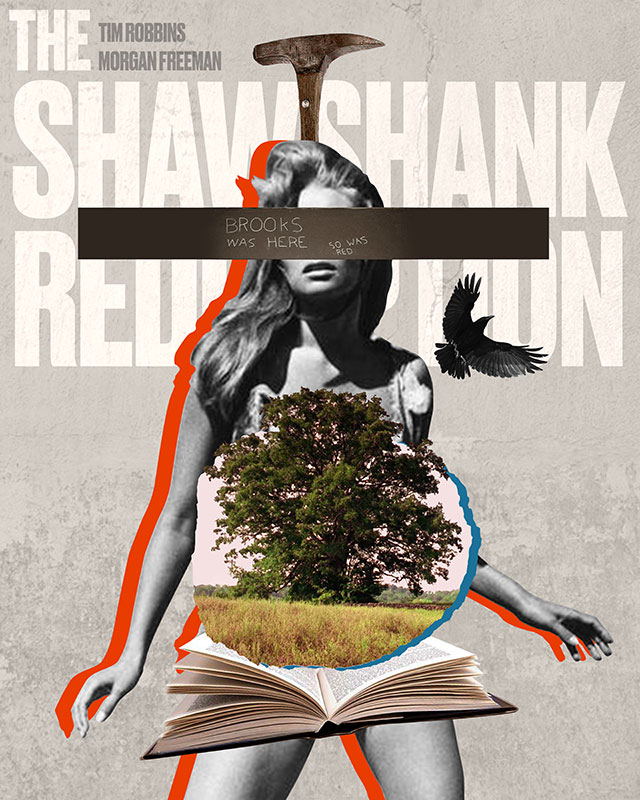 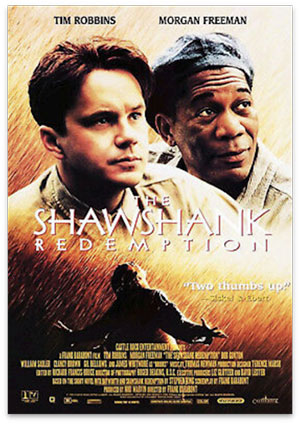 "To me, The Shawshank Redemption is all about 'salvation lies within' and the fight to maintain a sense of self," says thisisivy. "My design wants to showcase that true redemption is to believe in oneself. The true salvation for Andy Dufresne was his faith in himself, his hope for himself and his belief in himself. Using the symbols that represent 'freedom' and 'escape' in the movie, I organize them into a cross figure to highlight how the religious theme is running throughout the movie but the key to 'salvation' lies within the characters' faith in themselves. Once freedom is archived, only the one who believes in themselves, survive." 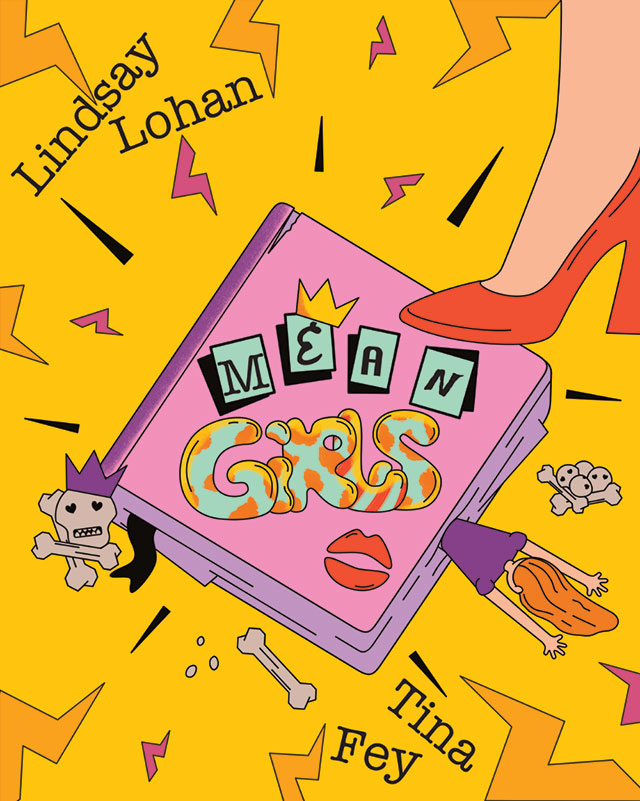 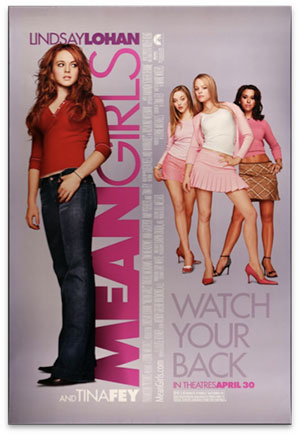 Says christinarobin: "A teen comedy about the difficulties of surviving in high school. To enhance the flavor is added three pink-powdered snakes, sour-mouth outsiders, a handful of smoothly shaved legs in short skirts. The storyline sauce additionally includes stereotypes, metaphors for the problems of dictatorship and power, an analysis of the mechanisms of political technology, rebellion and revolution, and even allegories of Orwell's Animal Farm. And all this, surprisingly, fits into an hour and a half of simple plot with clear dynamics. For the movie, it happens several times. And the process of transition from one status to another can cause admiration if you look closely. Deep questions about the nature of power, its toxic effects on man and the society around him. An amazing feature of the film is its timeless readability. And it can, without hesitation, be described as one of the main advantages. In addition to the extremely deep allegories of dictatorship, we also have a direct reference to a moral abstraction that can lead to extremely unfortunate consequences. Added to the top is a discussion of the nature of rumors." 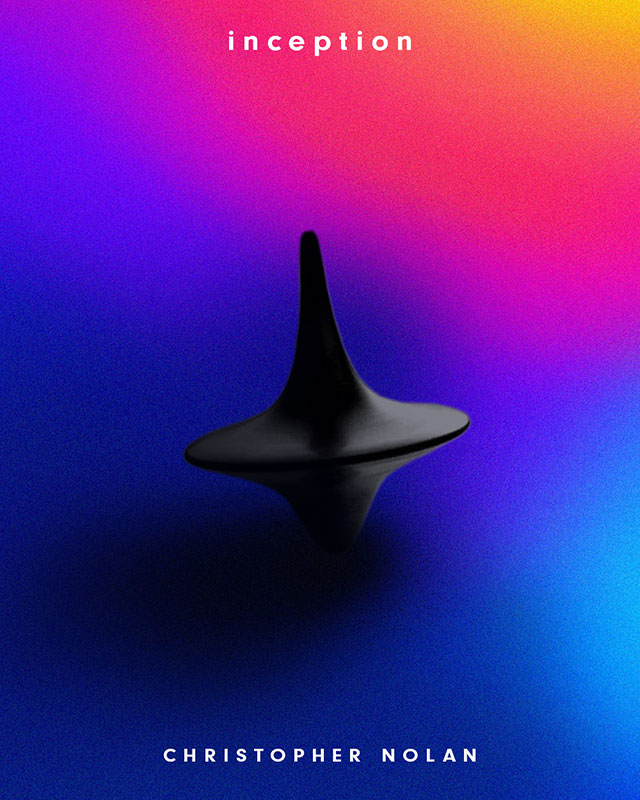 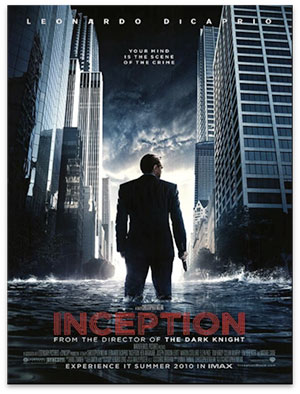 "I chose one of the main symbol of the film and added to this idea some freshness," says ellenasm. "That's why I decided to play a little with the gradient background which should represent the dream world."