Canal+ and BETC: Inside One of the Great Client/Agency Partnerships

Plus, new creative for the collab with Netflix

It's finally happened: Canal+, which is in many ways the French equivalent of HBO—and acts as HBO's French market partner, to boot—has joined forces with Netflix.

It announced the news with an episodic advertising series, created by BETC and slyly titled "Canal+ BIIIP" (the French version of bleeping something out).

The first two episodes precede news of the partnership, and are positioned as a clumsy attempt to compete against Netflix. Released earlier this month, they reveal that Canal+ now has a streamable "content platform," just like "N******."

Below is "The Shoot." The actor schooling the director on Netflix's embarrassing prevalence ("It's even a saying now, 'Netflix and Chill'!") is French star Kad Merad.

If you feel you missed an inside joke with the "Republican Gangsters" reference, you thought right. Merad was nominated for a Best Actor Emmy for his performance in the Canal+ show as a revenge-crazed mayor.

"Family Dinner" takes us deeper down the meta hole. In it, a family discusses the previous ad while having dinner.

Kids are smart. They're also the worst. Good on Dad for seizing back territory by talking—scoff!—soccer. Though a love of soccer is actually on the rise among millennials, equal now to basketball viewing, at least in the U.S. (Tell that to your planning department, BETC!)

Both pieces promote Netflix just as much as Canal+, a decision that's hard to understand until the final spot, when the truth is revealed. The partnership, which lets people access Netflix via Canal+, is illustrated with a wild studio mishmash of both Netflix and Canal+ content, explored through the flustered countenance of Merad (who himself features on both platforms; he's in a slew of French films on Netflix).

Soccer fans will also be pleased to see they haven't been forgotten.

The work went live last week, and marks a shift in Canal+'s public attitude toward Netflix generally. The pay TV giant was hostile (turn your translators on!) upon Netflix's arrival in France, and efforts to fight it with its own over-the-top (OTT) platform were mostly seen as futile.

A truce, on the other hand, is a win-win: Canal+ draws nearer to Netflix's 5 million youthful French subscribers, while Netflix penetrates deeper into higher-income, change-resistant boomer territory—like the dad in the second ad.

This gleeful about-face got us thinking about how long Canal+ has worked with BETC—over 15 years, dating all the way back to when the latter was still called BETC Euro RSCG. They've seen a lot of change together. 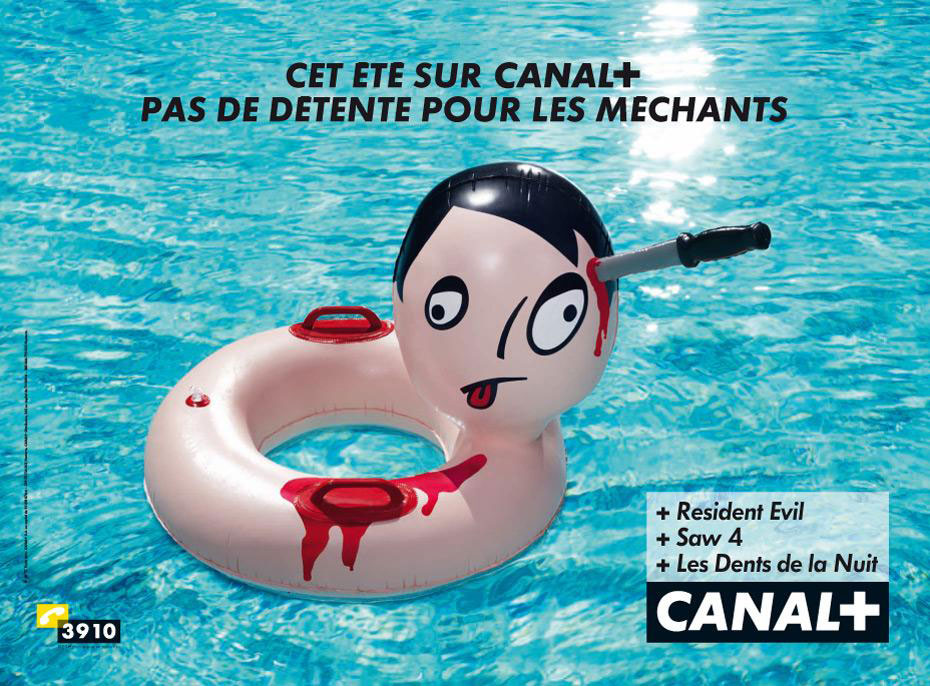 "No rest for the wicked." A 2009 BETC Euro RSCG ad promoting Canal+'s summer slashers, including Resident Evil and Saw IV.

We sat down with Stéphane Xiberras, president and chief creative officer of BETC Paris, and Emilie Pietrini, Canal+'s group comms director, to talk about it.

Muse: Congrats on the Netflix collab! How did that happen after years of combat?

Emilie Pietrini: Canal+ is both creator and aggregator. We are well aware of subscribers' behaviors and tastes, and of their consumption habits. It has become important to make the content richer by offering a complement to both current subscribers and future prospects, while at the same time making Canal+ more user-friendly.

What first attracted to Canal+ to BETC, and what keeps you there?

Pietrini: BETC is our historic agency partner. They have a real understanding of our challenges, and they always know just how to leverage our different offers and shows, and create entertaining ads around the Canal+ brand.

"The Closet" (2009) showcased Canal+'s original content strengths. The entire ad turns out to be a man's long-winded explanation for being discovered in the closet of a couple's bedroom. He's listed as a screenwriter for the network.

Stéphane, do you remember your first Canal+ brief? Did you have a sense of the kind of relationship you'd develop with the brand?

Stéphane Xiberras: I used to be a TV scriptwriter for years before going into advertising, and I actually worked for Canal+. So in a way, I've always had a certain fondness for writing silly shit that makes people laugh, which has also always been the case for Canal.

"The Bear," from 2011, is an iconic reference in the histories of both agency and brand.

Talk to us about "The Bear." How did that even happen?! Did you know what kind of impact it would make when it launched?

Pietrini: Yes, we knew straight away! The Bear is the ultimate exhilarating ad, which is something increasingly rare these days.

Xiberras: I had a line of some pretty nutty Canal ads behind me, like "The March of the Emperor" and  "The Closet." People were waiting for the next one to come out, including the folks at Canal. That gave me quite a lot of freedom to go and explore the depths of my twisted mind, so with my creative team, we didn't hold back.

Afterwards, when I saw the first edit, I reckoned the film would probably make a few people laugh … but beyond that point, no, I wouldn't have guessed it would become such a success.

What's the work you're proudest of making?

Xiberras: I love "The March of the Emperor." It's pure madness.

Stéphane, your Canal+ work is beautifully produced but there's always this streak of wackiness. It's different from much of what BETC is known for, like the Air France work. Where does this subversive vibe come from?

Xiberras: Historically, there's always been two streams of work coming out of the agency, which are rather different stylistically.

Rémi [Babinet, founder of BETC] has a very smart and chic French style, which is reflected in our work for clients like Air France, Evian and Lacoste. Then there's me—slightly more foolish and on the wacky side of things, but always craft obsessed. Unicorn balls, talking bears and belly-sliding Napoleons, that kind of stuff.

Today it's less visible. Since the agency has grown, we've had a lot of creative directors join us, each with their own distinctive style.

Xiberras: It's very hard to handle two brands in one single campaign. It is a bit like shooting with two actors who both want to own every scene of the film.

The key here, I think, was that we were lucky enough to get to work with actor Kad Merad, who is very famous in France, and who brings that little doubt where you're not sure whether you're watching an ad or a Canal+ show.

And a big shoutout to the director, Martin Werner, too!

Emilie, how would you describe the brand that BETC's helped create for Canal+?

Pietrini: Creativity, audacity, humor, passion, a free tone of voice that favors creation and creativity above everything.

Do you have any thoughts on the complexity of pivots like this one? I'm thinking about how the network was historically film-oriented, and is now a go-to brand for great television.

Pietrini: With an appetite for good stories, characters and originality, Canal+ has always supported creativity. Originally we were the only French channel to broadcast U.S. series at the same time as they came out in the States. As a bonus, Canal+ was also the first to develop quality French series, with a point of view on the world that focused on young talent and European culture.

It's a brand DNA that is also reflected in the way we treat sports and documentaries.

Xiberras: The ads I've made for Canal+ kind of serve as trailers, not necessarily for the content but for the spirit of what subscribers will get access to on the channel. It is a pay TV channel, so we have always insisted on the production and the quality impact of the ads. In a way, they worked as branded content, before it got trendy.

The French are weird, I know.

With Netflix as a partner, where would you say Canal+ is headed in the next five years?

Pietrini: The model is changing to a new ecosystem. myCANAL, our OTT app, will also be transformed as of this month, with a new version highlighting the depth of our live-streaming offering and on-demand content.

What's your secret for keeping this relationship alive?

Xiberras: I think I understand the brand very well. And also, I'm exactly their target. That helps.

Tell us a production story nobody knows, but that you'll never forget.

A few years ago, there was a person who worked at Canal+. She's gone now, but she had a rather important role. Came the day when I presented the first montage of "The Bear."

In other words, there was zero CGI on the bear—what we saw on the screen was the actor, wearing platform shoes and a bear hat with ears. Ridiculous.

Then this Canal+ lady looks me in the eye and says, "Xibé! It's magnificent! It is so funny! But why do you want to spend all that money on CGI? It's very good like this. It's so surreal!"

Fucking hell. I'd say what was "surreal" was the situation happening there and then. We were very close to making the shittiest ad in the world.

With that alternate universe in mind, we leave you with "Best Friend," a holiday spot from 2015.