Leap gorgeously toward those vaulted ceilings 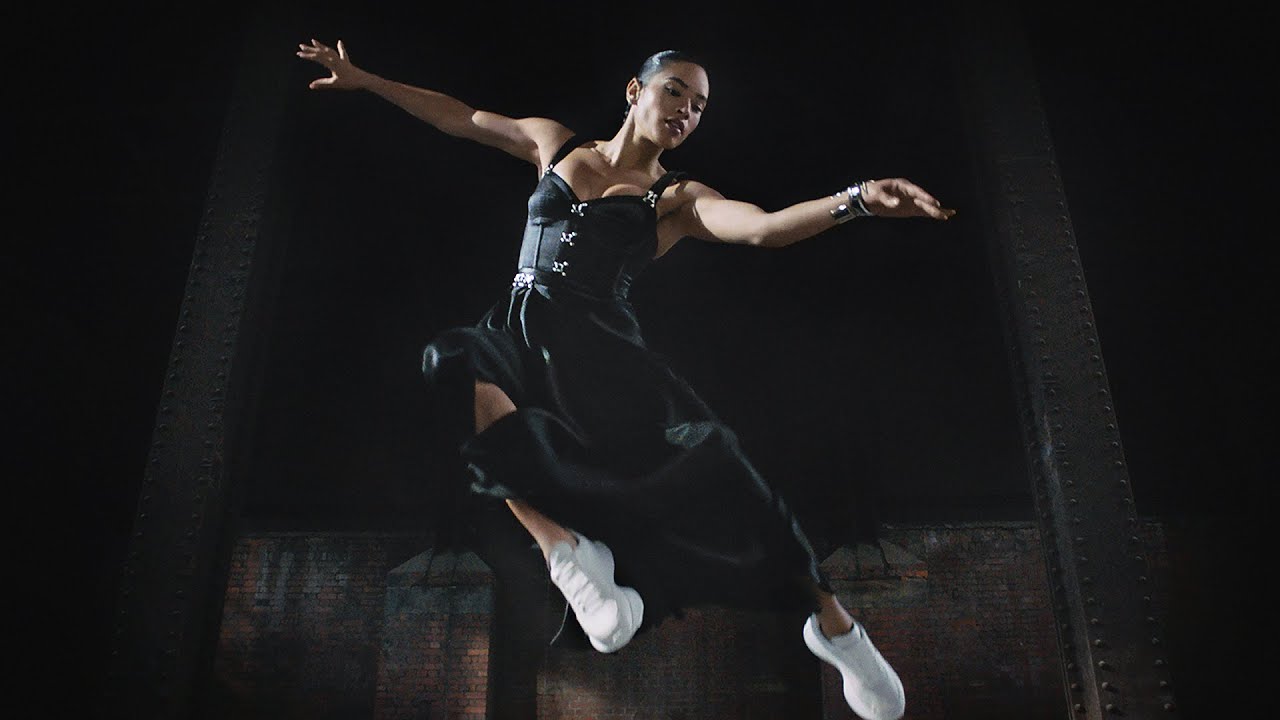 "MetteNarrative directed by Sophie Muller" (of Prettybird) stars singer/songwriter and dancer MetteNarrative in a corset dress, a pink skirt, and a pair of Alexander McQueen Sprint Runners—the ad's subject, even if it shares the starring role.

Commissioned by Sarah Burton for Alexander McQueen, this is the second of three accessories films for the fashion house.

A lot of high-fashion brands now produce sneakers: Gucci's in on it; Louis Vuitton upped the game with Virgil Abloh; Balenciaga (for whatever that's worth); even Jimmy Choo, which is better known for its femme fatale heels than its bedecked hiking boots.

This desire to fuse luxury pricing with normcore aesthetics can raise conflicting questions. Sneakers have been prime accessories for stuntin' since Nike's Air Jordans transformed them into assembly-line collector's items, in many ways eclipsing Michael Jordan's own celebrity. But for a long time, the most enviable sneakers were still coming from sports brands.

The serious entry of luxury brands into this category invited the question of what they bring to the table, apart from a higher price tag. Sure, Gucci can make luggage. Does it know how to make comfortable urban footwear? We love Jimmy Choo, but its sneaker offerings sometimes look like an extension of its evening bags: cute, but not why you shop there.

Time has made this a dated concern. Jimmy Choo, for example, has demonstrated it can make perfectly hardy footwear. Balenciaga's sneaks are as much political commentary as gear. For Louis Vuitton, Abloh took the codes and nuances of historic, evolving urban style and expressed them like street-ready high art, a kind of Jean-Michel Basquiat for your body.

This McQueen work does something else again. MetteNarrative's moves are an organic combination of elegance and athletic prowess—a ballerina in sneaks, but also more. People have juxtaposed formalwear and sneakers for ages (our prom pictures are a now-questionable mashup of tulle and matching Sauconys), but her movement extends that conversation further.

Sometimes when people discuss how their style changed during Covid, there's a lot of talk about how we just don't like wearing pants anymore, and want to be more comfortable. But another thing that happened was a longing to feel pretty again. (One Zoom-led Clio meeting was prom-themed.)

Some days, sick of wearing pyjamas in confinement, I padded around barefoot wearing what I called "princess dresses." Gucci captured this energy in 2020's "The Ritual," when it sent clothes to models in confinement and had them film whatever ordinary thing they were doing while wearing them.

The MetteNarrative work feels like a descendant of that desire to move both comfortably and elegantly in the world. It combines the primal, embodied and creatively free aspects that came out during Covid with the desire to feel lovely—something the luxury scene is good at. When alive, Alexander McQueen wanted to infuse his feminine designs with a delicious sense of danger, of the predatory, and that spirit can be felt here, too.

As mentioned, this isn't just about the juxtaposition of the skirt and corset with the sneakers. It's about how Mette moves. She lifts weights and does somersaults, facilitated by her sturdy shoes and a skirt that, however fine, lets her move unimpeded. We're reminded of being kids, wanting to run around and get dirty when we were all dressed up to do exactly the opposite … and consequently told to suppress that instinct.

There's a fluidity to her that illustrates what makes these shoes uniquely McQueen. In some instances her footwork feels more suited to a pair of en pointe laceups, but the sneakers accommodate her like they're weightless, less bulky than they look. Yet they also seem capable of supporting her as she impacts the earth.

Dance of any kind is a composition of stamina, athleticism, rhythm and a certain element of fluid grace. These characteristics manifest in different ways depending on the genre and the dancer. Mette makes use of them all, but how she manifests them says as much about the shoes as her style: Both are children of multiple genres and inspirations. Somehow they also express, wordlessly, this contradictory longing that permeates our liminal reprieve from confinement: to move in the world again and adorn ourselves, but feel a little freer in our expression than before.

When last we looked at Sophie Muller's work for McQueen, she'd given us "The Jewelled Satchel," a short film starring musician Lucia Fairfull. The vibe and general message there were confusing for us. But this work with Mette is on point, elevating not only the artist but the sneakers, and cohesively describing what McQueen brings to urban luxury.