Lacoste's Latest Ad Is a Call to Collective Play, for Better or Worse

When the crocodile lures you in

For Lacoste, agency BETC designed a campaign that puts collective relationships at its core. "Crocodiles play collective because that's the only way to play," proclaims the hero video.

Here's something we didn't know before: Crocodiles are the most social reptiles. They can even make cross-species friends. Isn't that neat?

Seven creative people were crammed into "Crocodiles Play Collective," shot by seven different photographers; the associated print work permits a longer linger. The talent appear in their natural habitats—Paris, New York, Berlin, Los Angeles, and London—trussed up in iconic Lacoste polos and going about their urban lives … with their collectives, of course.

A$AP Nast represents L.A., and photographer Melodie McDaniel captures him with his friends DJAVAN and Cory. The artist "always carries the spirit of the crocodile"—if not on his shirt, then on his chest, where the iconic croc symbol is situated just over his heart. A permanent polo. 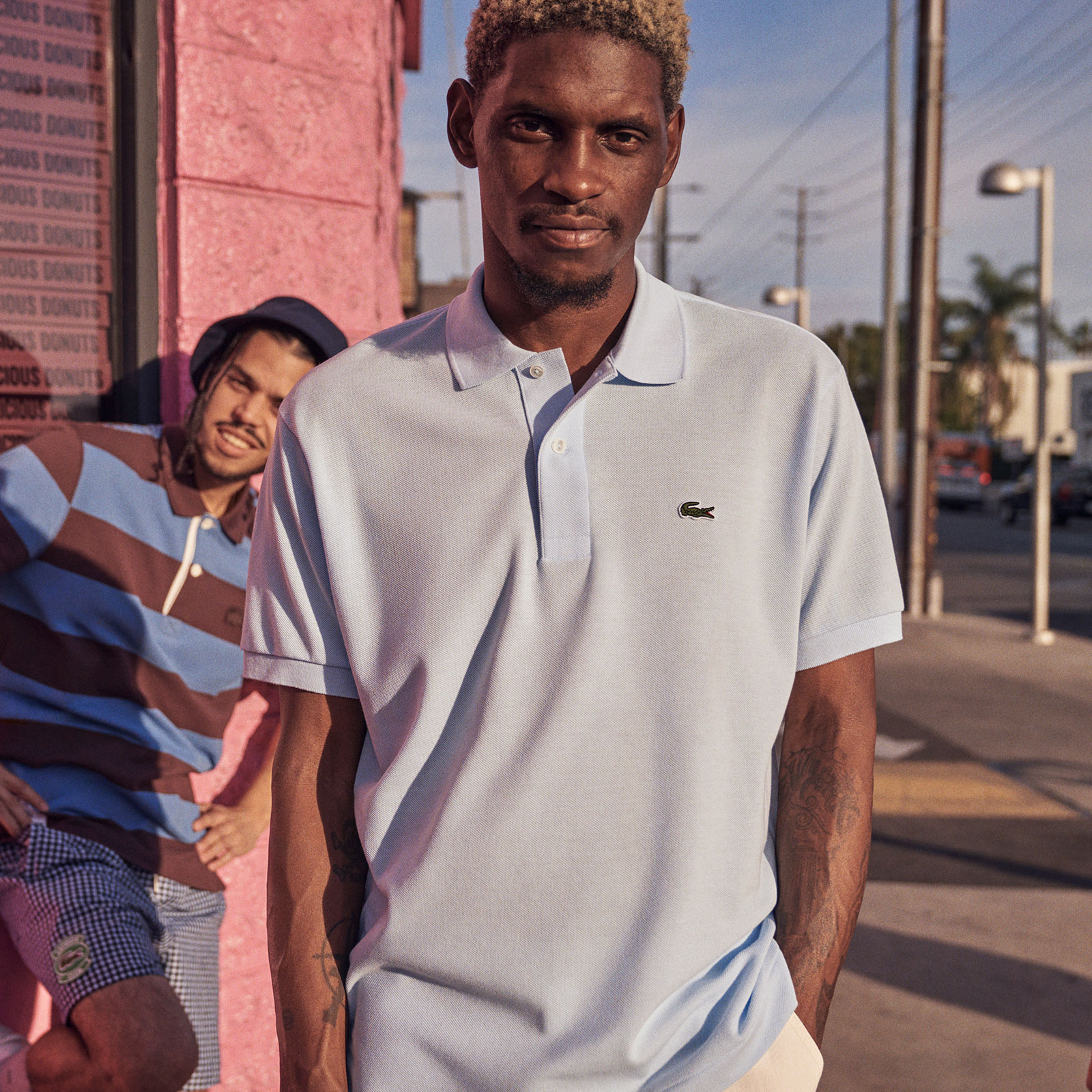 In New York, photog Stef Mitchell shoots Evan Mock. The skater, actor and model appears with his brother, sister and another skater friend—four people who are "ambitious and always ready to pursue their dreams." 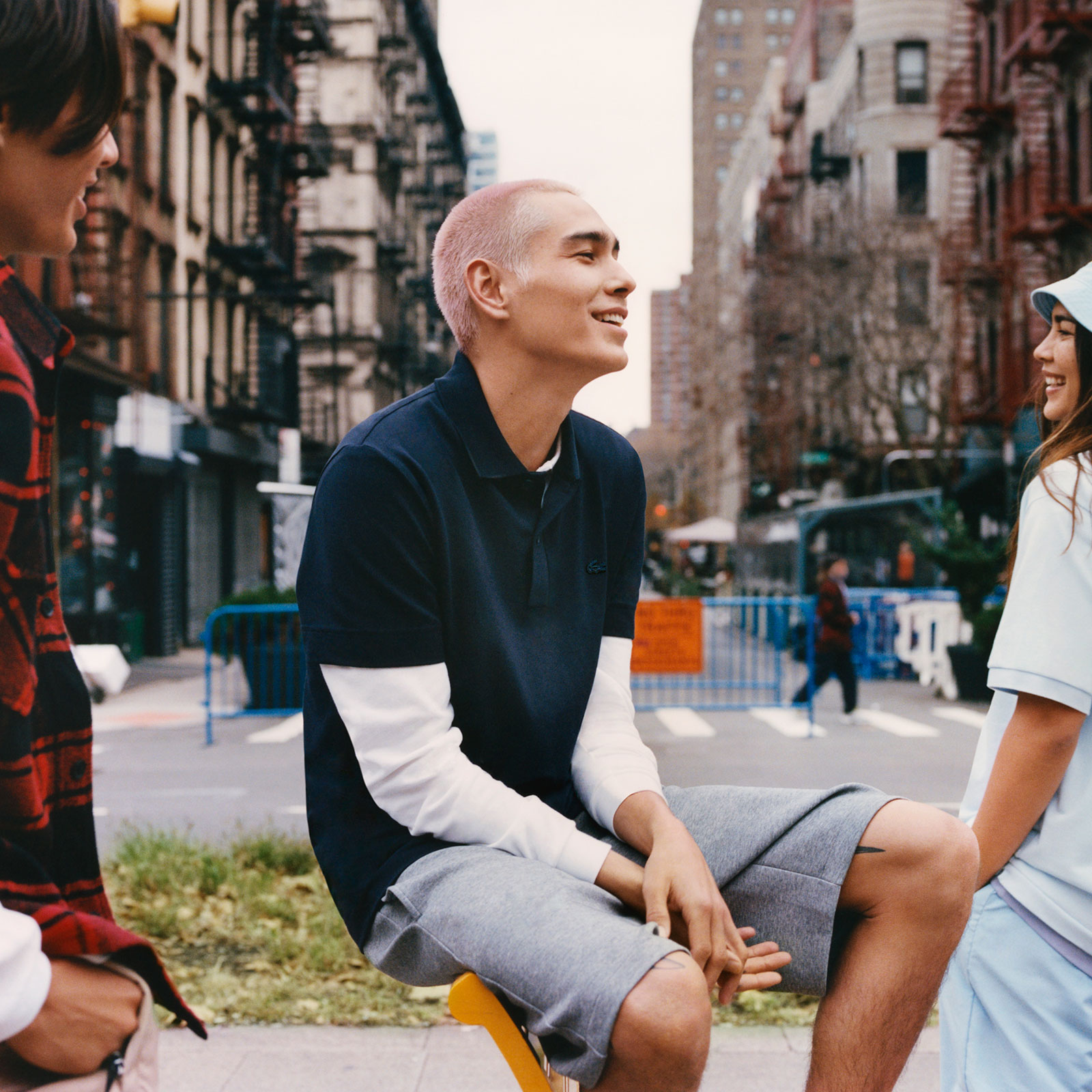 Leap over the Atlantic with us now. In Berlin, DJ and entrepreneur Peggy Gou appears alongside her "closest friends, the family we choose." They are shot by Vitali Gelwich. 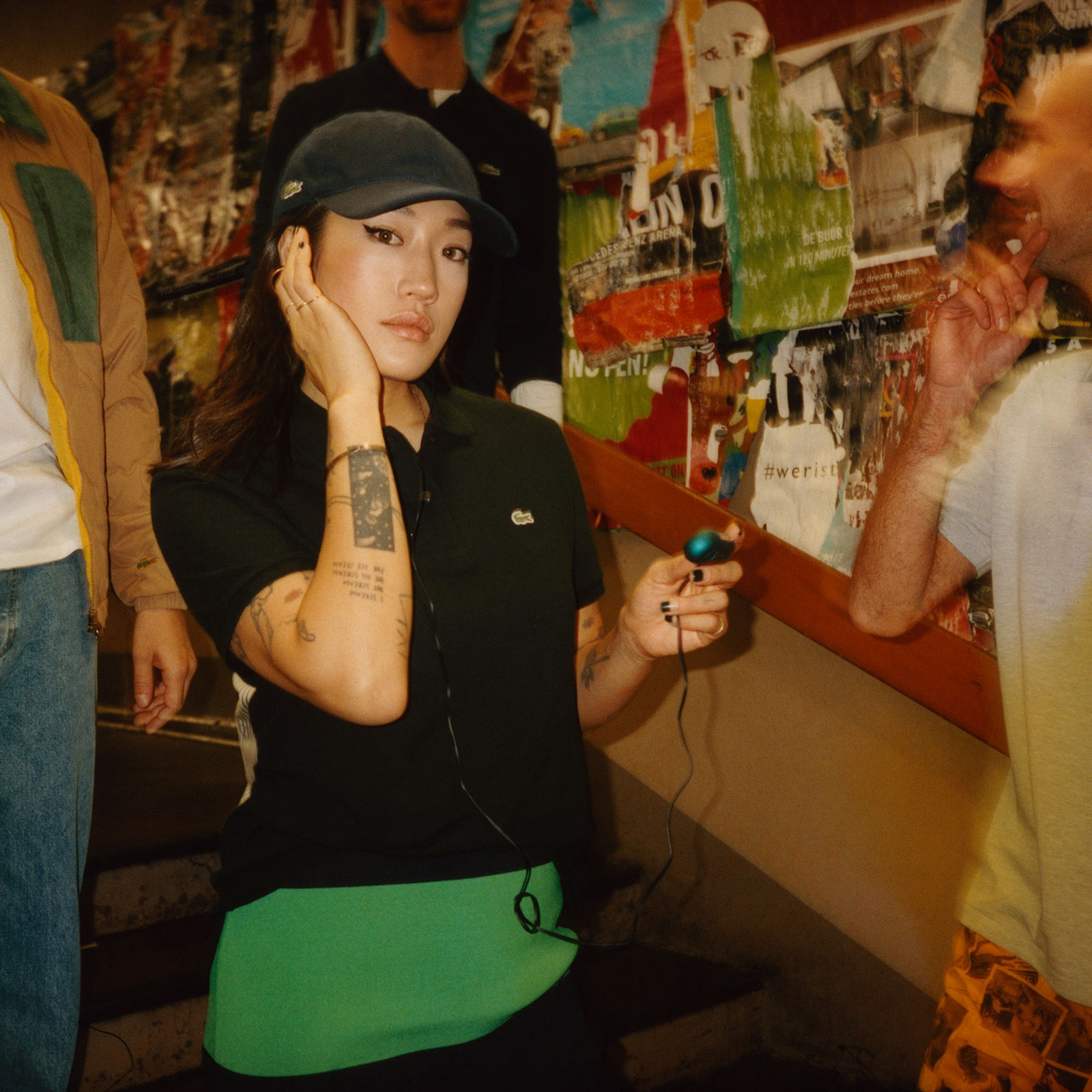 On the other side of the Channel, in London, the poet Sonny Hall and his entourage are captured by Elliott James Kennedy. The collective is about feeling "connected," Hall says. 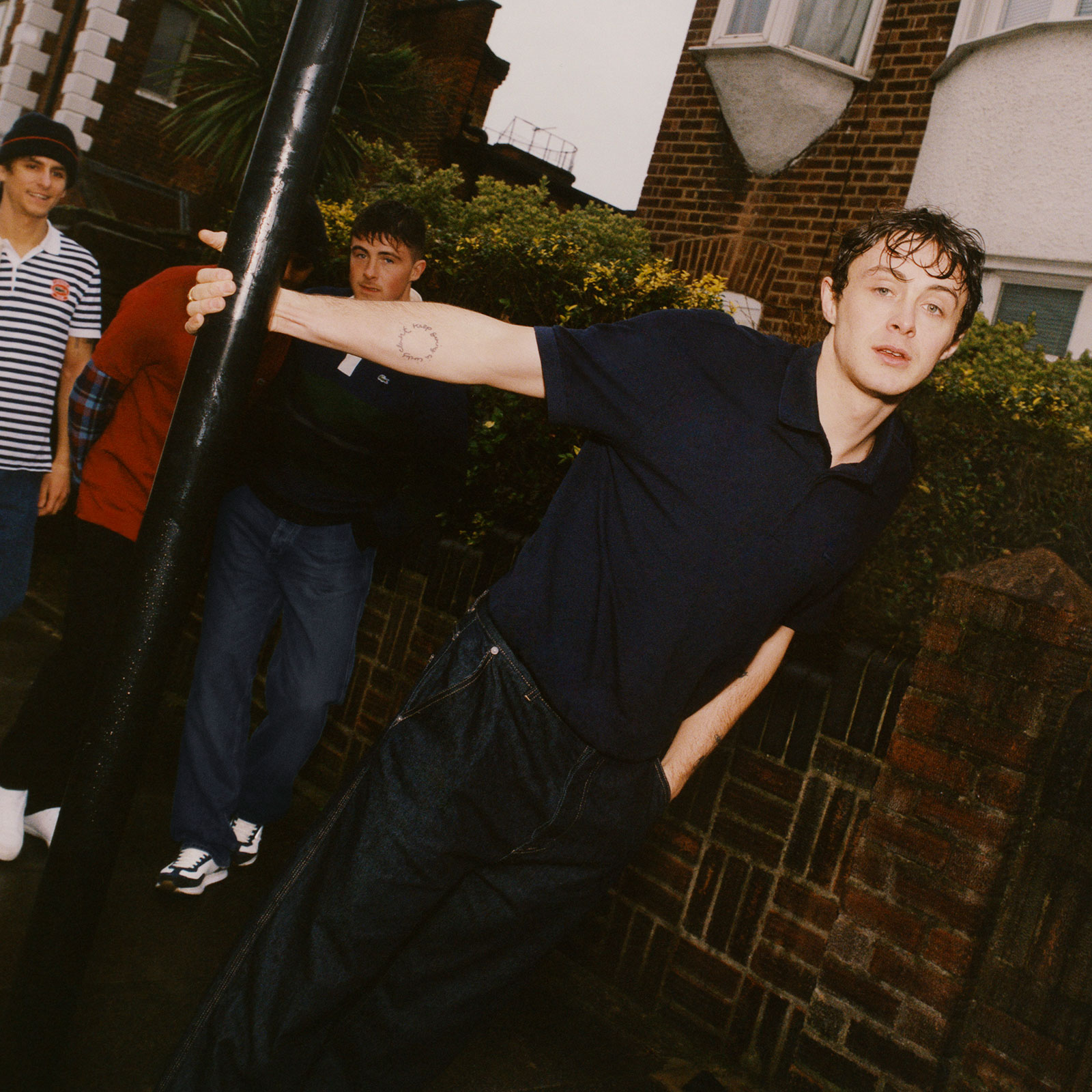 Meanwhile, in Paris, Lacoste's historical home, French actresses Louise Bourgoin and Mélanie Thierry are photographed with loved ones by Quentin de Briey and Joshua Woods, respectively. Dancer Salif Gueye performs in the streets with three other dancers, captured by Ilyes Griyeb. Gueye says his collective is his family. 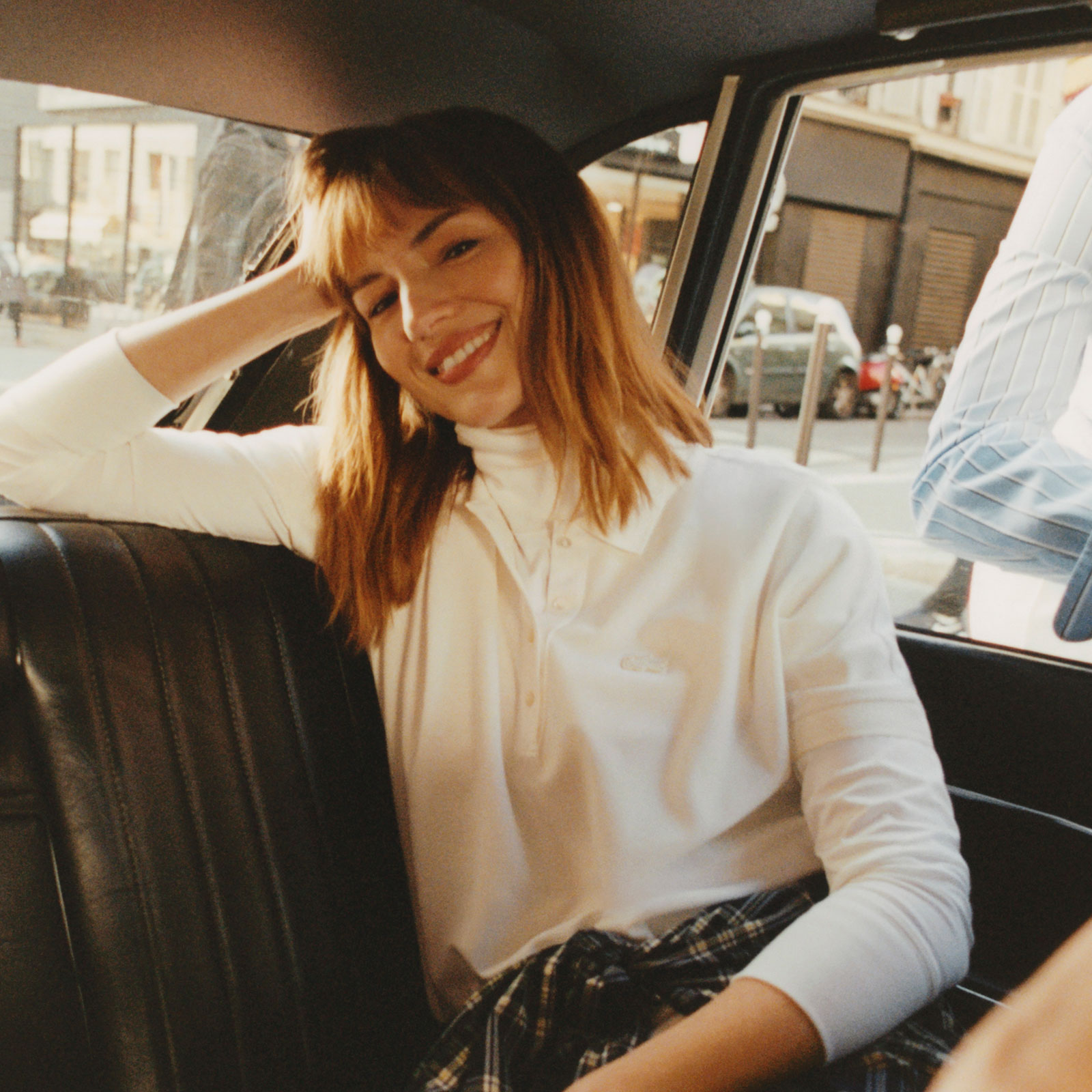 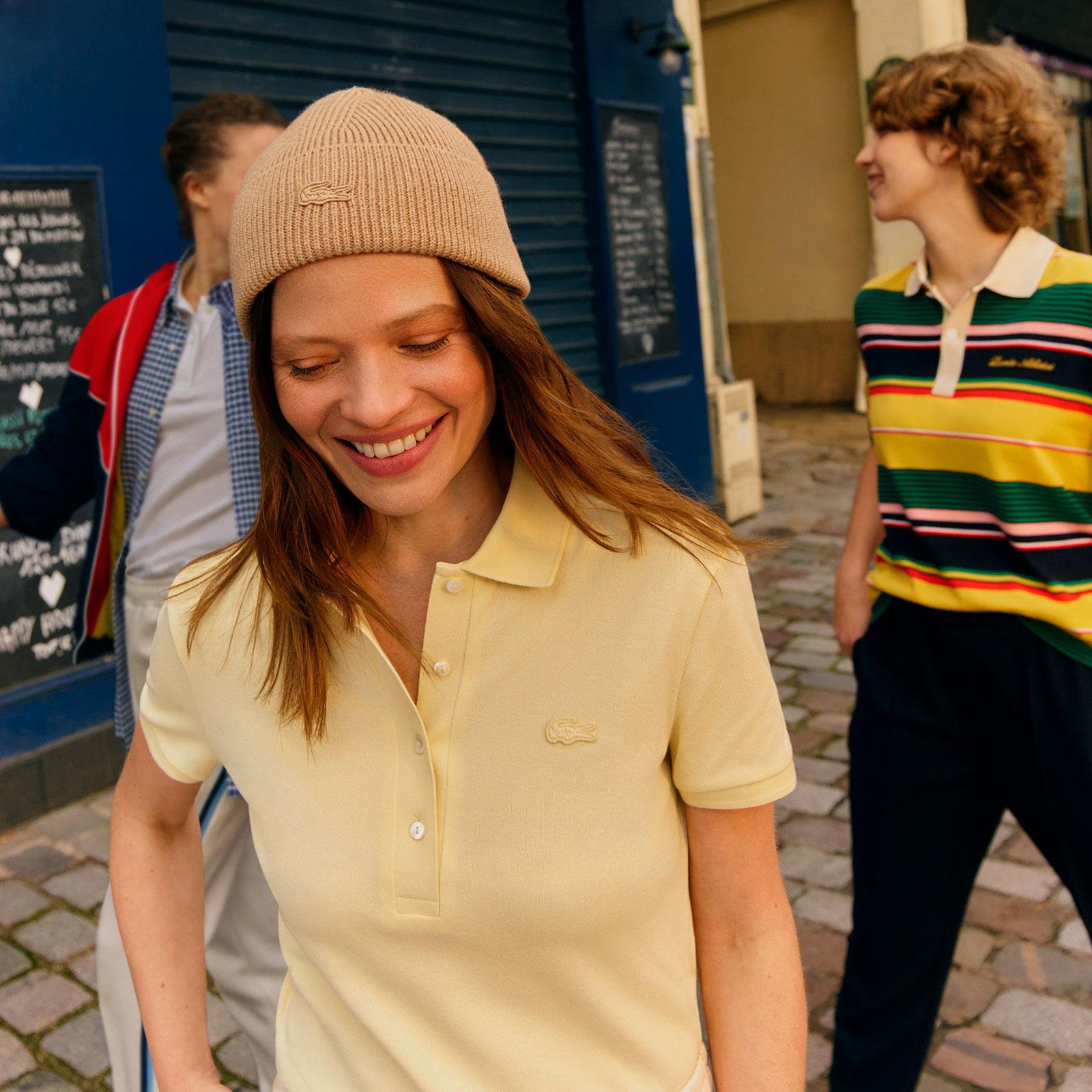 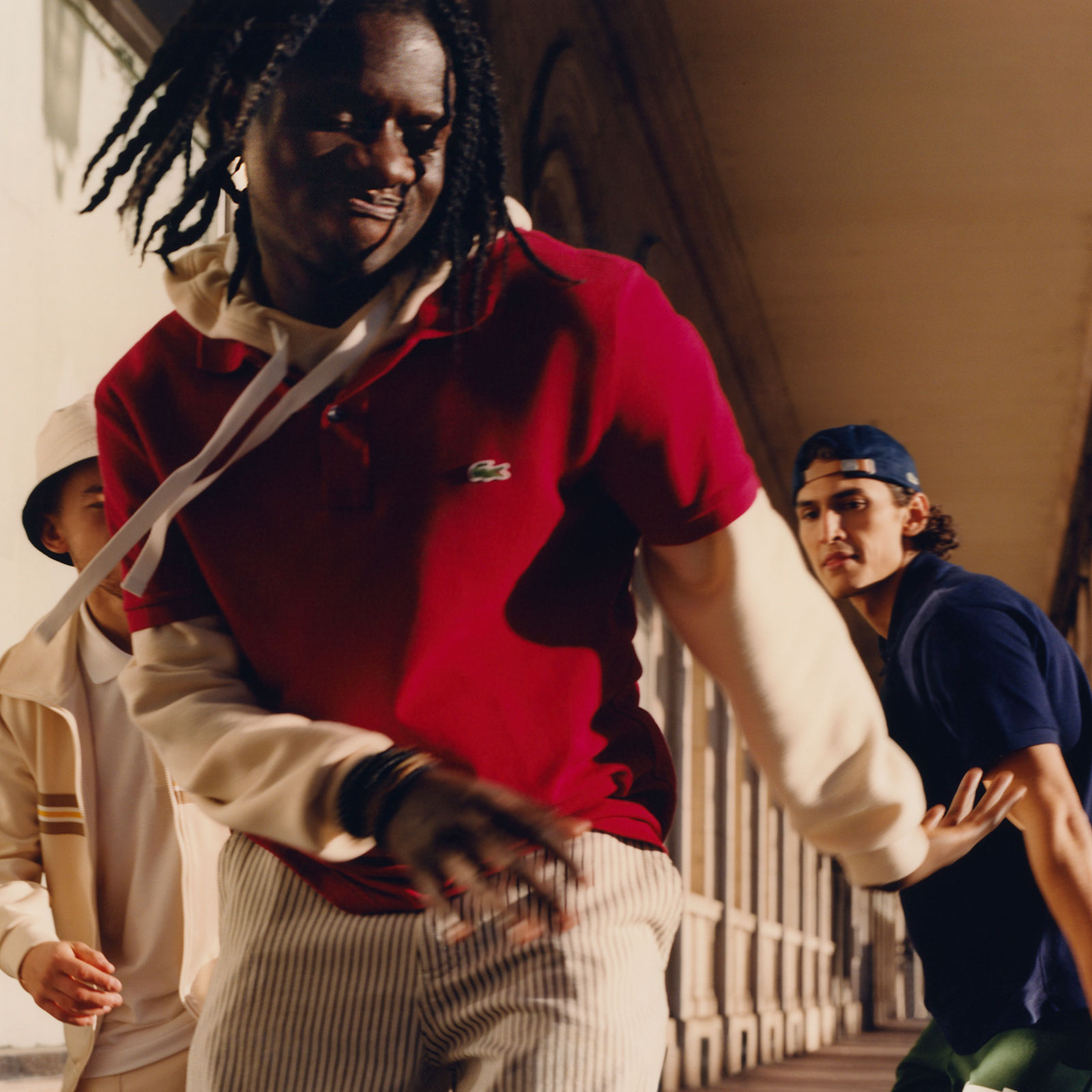 There's a charm to this campaign, even despite its mildly tokenish diversity (though three out of seven ethnic minorities, not to mention three women out of seven, is an OK mix). Everyone is young, nubile and playful, like a crocodile bouncing a ball, and the energy of these big cities infuses the piece—shot to feel nostalgic, giving us a kind of chill, modern Nouvelle Vague vibe.

That nostalgic touch is perhaps appropriate because it casts an almost forgiving filter over how out-of-step the work feels when compared to lived reality in these very same metropolises. Paris—where three out of seven of the creatives are situated—remains in semi-lockdown, everyone masked and prickly, frustrated by an incredibly slow vaccination rate in comparison to the speed at which the U.K. and U.S. have unrolled their programs. The sluggishness of vaccine rollouts is a problem Berlin shares, along with the rest of the EU bloc, also struggling to contain coronavirus's third wave. L.A. is in California, where it remains mandatory to wear a mask in public, even if you've been vaccinated. This is incidentally also the case in New York.

As for London, well … I guess London's more or less fine.

None of this is to say that all ads should feature masks, nor that we shouldn't be sympathetic to the fact that everybody—even the introverts—wants to lazily throw their arms around a bunch of people again, fearless and free. The "collectives" in the ad are also not huge. There's no massive party scenes (in theory); small groups fill the frames, which resembles how people in these cities might be socializing right now anyway.

Certainly there is room for this kind of work. But it rubs us wrong to push the notion of "collective play" so specifically and so hard. (I mean, is it really the only way to play?) Forget the vaccine stuff for a sec; we have lived in rolling pandemic times for more than a year. However much we miss (and need) physical touch and intimacy, something as basic as a hug has become a matter of careful negotiation. We just don't move the way we used to; every body is a potential landmine, even if we love that body.

But back to vaccinations. This is a global campaign for a global brand. In addition to new Covid waves, vaccine equity has also been a huge global challenge, something United Nations secretary-general António Guterres called "the biggest moral test before the global community." Among the biggest challenges to equitable vaccine rollouts has been vaccine stockpiling—precisely what has made the U.S. and U.K. so competitive at distributing jabs, and what is making it so hard for countries in the EU, never mind what we disparagingly call "developing countries," to secure any.

Even then, the difference between how quickly Paris and L.A.'s youth get to return to playful collective normalcy, free of masks and rich in hugs, is a minor frustration. It is nothing compared to those who will wait longer still, raising risks of further virus mutations and many more deaths, before a meaningful percentage of the global populace can just as gaily claim that "collective" is "the only way to play."

Ironically, BETC took care to mention that it protected itself for these on-location shootings, watching and processing the footage remotely from the safety of its Magasins Généraux offices in Pantin, a suburb of Paris. At BETC, masks are distributed freely to all employees who show up to the office.

We're not trying to be wet blankets. Mostly we're saying, hey, agencies, think about what you're doing. Think about what you're saying, and how. Who are you excluding, and is the reason why good enough? We are not robots who live in ivory towers. We are living this weird new normal, just like everybody else. If it matters enough to mention what safety precautions you took in shooting, shouldn't it matter whether the world in which those precautions are necessary is reasonably taken into account in the story—and the bloody tagline!—that you design, then disseminate into the world, itself a little storytelling brain virus?

Back to the ad. "Crocodiles Play Collective" features music from producer J Lloyd, one-half of JUNGLE. The video went live on April 19, across social networks, then on the 20th on Lacoste platforms. Print work will appear on billboards at April's end in France, in May in Russia, Germany and Korea; and in June in Spain.