All About Tiffany's 'About Love' Campaign With Beyoncé, Jay-Z and a Massive Diamond

There's more to this than a rock 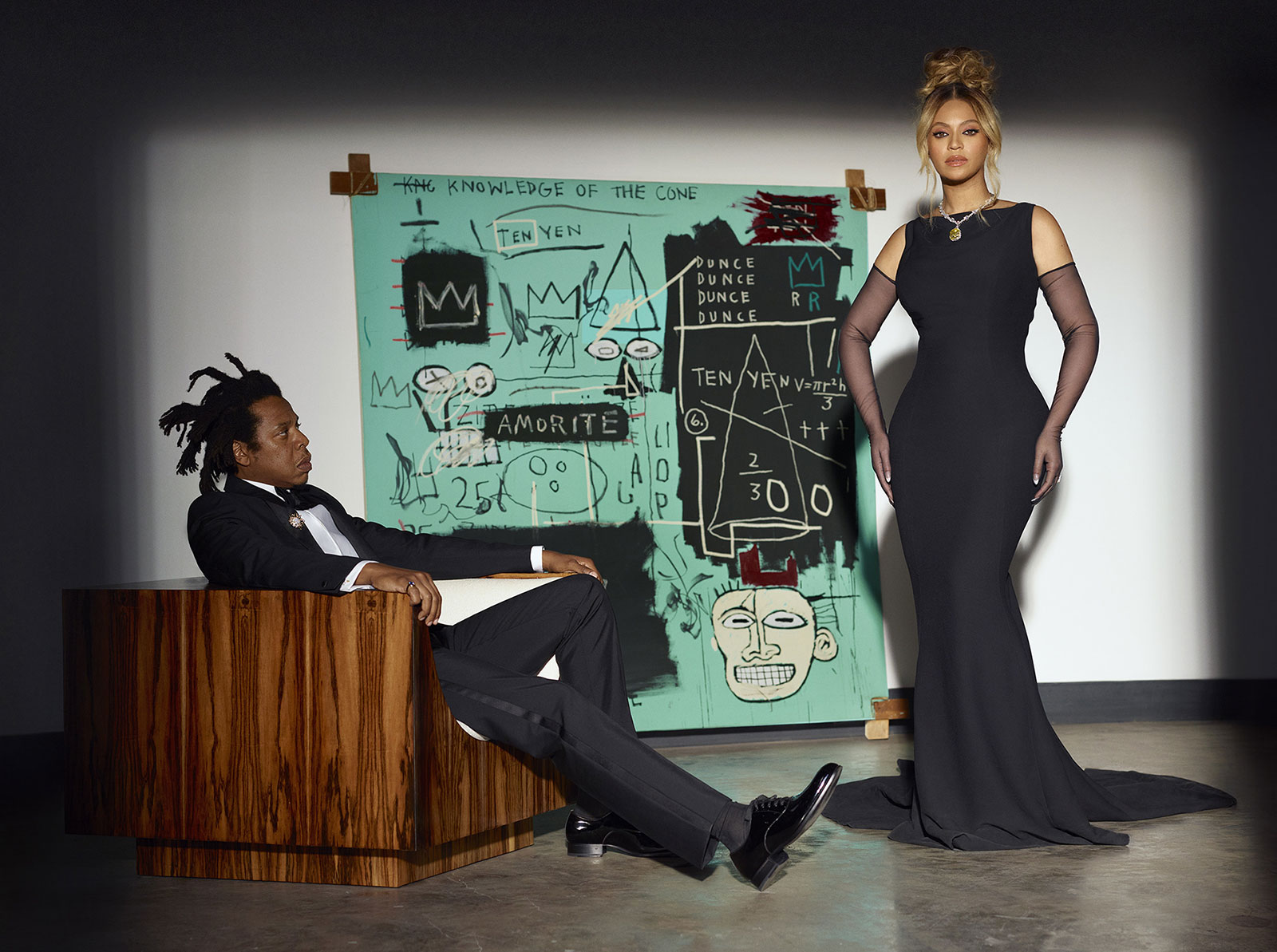 Tiffany's "About Love" film launched this week. It features Beyoncé and Jay-Z, plus a not-terribly-subtle Jean-Michel Basquiat tableau swathed in Tiffany blue.

Given the size of the media frenzy around this ad, even weeks before its launch, you've probably already seen it, so let's put it front and center:

The ad is an homage to the 1961 film Breakfast at Tiffany's, where Tiffany's, the brand, is practically a co-star. In the opening scene, Audrey Hepburn pulls up to a Tiffany's store in New York to gaze into the store windows while munching a croissant. She's still wearing evening clothes—a Givenchy gown, and a whopping 128.54-carat yellow diamond chilling the flesh of her throat, mounted on a ribbon necklace designed by Jean Schlumberger for his Tiffany's collection that year.

It is this very diamond that Beyoncé sports in "About Love" (now sitting in a subtler mount, the better to emphasize it). Beyoncé is the first-ever Black woman to wear it.

That isn't where the tributes end; far from it (though it's perhaps the most expensive). Beyoncé is seated at a piano, singing a cover of "Moon River," composed by Henry Mancini for Breakfast at Tiffany's, in which Audrey Hepburn winsomely performs it on a fire escape.

Breakfast at Tiffany's is a comedic love story about a small-town girl, Holly Golightly (played by Hepburn), who comes to New York with one goal: to marry richer than sin. A failed writer, Paul Varjak (George Peppard), bankrolled by a wealthy married woman, falls in love with her, and, bit by bit, is inspired to write again. (Hot take: Every manic pixie dream girl role owes a massive debt to Holly, who does little to win Paul's heart besides being quirky, broken and whimsical.)

When we find Holly, singing "Moon River" into the ether, it's from Paul's perspective. He's typing in earnest, then hears the strumming of a guitar, and opens his window to gaze lovingly down at his muse.

"About Love" reinterprets this moment for a different kind of time and love.

Most millennials grew up with the love story of Jay-Z and Beyoncé. It seemed charmed—two pop stars from different sides of the spectrum, taking hands to forge even more explosive careers, separately and together. But Beyoncé's 2016 "Lemonade" drop changed that when she exposed the couple's relationship struggles—and her own conflicted, unvarnished feelings—to the public.

Like Paul in the film, Jay-Z is seated at a typewriter. And like Paul, he hears the music and wanders off to gaze at Beyoncé as she sings, the relationship between her and his work underscored by that moment: She is his muse.

This is interspersed with nostalgic shots of their shared life, from Jay-Z's point of view; Beyoncé traveling, ostensibly for work; and scenes where he films her. These highlight the differences between the Carters, and Paul and Holly.

Bey, far from being an ingénue, designed a career on her terms. Unlike Holly, she can most certainly afford the diamond she's wearing. Jay-Z's lovestruck expression isn't the look of a young man falling for the distorted concept of a woman he barely knows; they have been partners for over 20 years—as far as we can tell, especially since "Lemonade," they've traversed some of the hardest sides of love.

And unlike Paul, who watches Holly secretly, Jay-Z enters the room and watches her openly. Beyoncé welcomes his presence, because this is a space they already share, intimately and creatively. She sings back to him, an equal in this relationship: He, too, is her muse.

What's more, they've grown up Black in America—Beyoncé from the religious South (her singing career started in the choir at St. John's United Methodist Church), and Jay-Z from the Marcy Projects in New York. When Breakfast at Tiffany's was released in 1961, the Black civil rights movement was in full force; Rosa Parks had made her iconic stand (by refusing to stand) just six years prior, and the Civil Rights Act wouldn't be passed until 1964.

So this conversation "About Love" is having with Breakfast at Tiffany's—through this diamond (mined in Africa, incidentally), these icons and this particular love story—is a narrative shift in the evolving story of American entertainment, as well as in terms of how America (at least from the perspective of Tiffany's) talks about the complexity of love, and what America is trying to be.

Lastly, this is a story about access: Who gets to be seen as representative of all these ideas for the romantics of today and tomorrow?

"Beyoncé and Jay-Z are the epitome of the modern love story," says Alexandre Arnault, EVP of product and communications at Tiffany's. "As a brand that has always stood for love, strength and self-expression, we could not think of a more iconic couple that better represents Tiffany's values. We are honored to have the Carters as a part of the Tiffany family."

All this brings us to that Jean-Michel Basquiat painting, which serves as a narrative thread throughout this campaign. The LVMH group, which owns Tiffany's, spent the last few years trying to reconnect to culture, not only in advertising but in community outreach and corporate makeup (though a lot remains to be done in this regard).

Basquiat's tableau, "Equals Pi," features a background shade that looks a lot like Tiffany's signature color, commonly known as robin's egg blue. Arnault believes Basquiat's use of it was an "homage" to the brand: "We don't have any literature that says he made the painting for Tiffany. But we know a little bit about Basquiat. We know his family," he told Women's Wear Daily.

"We did an exhibition of his work at the Louis Vuitton Foundation a few years back. We know he loved New York, and that he loved luxury and he loved jewelry. My guess is that the [blue painting] is not by chance. The color is so specific that it has to be some kind of homage."

"At no moment whatsoever was there any connection between 'Equal Pi' and Tiffany's blue box," she wrote to The New York Times (linked above). "It is blasphemy to even consider it. Basquiat's raw, visceral and subversive power was the antithesis of the traditional classicalism of the Tiffany standard."

It merits saying that although Tiffany's started using robin's egg blue in 1845, it wasn't trademarked until 1998 (today it exists as a private custom Pantone, Color No. 1837, referencing Tiffany's founding year).

But these are moot points. It's impossible to know who has a better sense of the intentions a man had before he died. We know Basquiat seemed to enjoy using his interactions with luxury to both criticize and contrast with it, a conflictual (but not unfruitful) collaboration that his estate maintains today in licensing choices for his work. This tension around money, art and power dynamics is something Beyoncé and Jay-Z frequently also engage with in their music.

And while Beyoncé's relationship to Hepburn has been explored in "About Love," Jay-Z's relationship to past icons is less discussed but no less potent here. In his work, Jay-Z often ruminates his connections to ancestors of affinity, of which Basquiat is one. He references him a lot; in his 2013 track "Picasso Baby," he even calls himself "the new Jean-Michel."

In the ad, Jay-Z's hair is styled in a way reminiscent of Basquiat himself, a reference just as cogent as the presence of Basquiat's painting. Black hair in America has always been a vehicle for subtle messaging and politics; controlling Black hair, even now, is a common oppression tool, and Black hairstyles were used to fuel Black civil rights. This is part of a larger conversation Beyoncé herself helped lift to mainstream consciousness with "Lemonade."

Basquiat isn't the only historic American icon Jay-Z thinks a lot about, nor is he necessarily the most obvious when compared with how Beyoncé takes a spiritual torch from Hepburn.

Sinatra was a contemporary to Audrey Hepburn, though they never acted together. At the time of their popularity, they represented two different sides of celebrity … a lot like Jay-Z and Beyoncé, actually: "He was from hard-knock Hoboken, New Jersey; she was born in Belgium to an aristocratic Dutch mother and an English (by way of Bohemia) father," writes Pamela Fiori in 1st Dibs. "Their styles, too, were vastly different: He was street-smart and roguish; she was delicate and ethereal. And yet they both possessed the one thing that can't be bought, bottled or readily defined: staying power."

(One thing we really like about this quote is the use of "hard-knock," a phrase Jay-Z also uses, in reference to himself, in his 1998 track "Hard Knock Life.")

This kinship between the trajectories of Sinatra and Jay-Z, and Hepburn and Beyoncé, is closer to the iconic pair than the fictional relationship Paul and Holly have in Breakfast at Tiffany's, which more resembles naive ideals of falling in love. The latter pair have more in common with the fraught nascent couples of 500 Days of Summer, or Eternal Sunshine of the Spotless Mind, than with a couple who forged fame, identity and a romantic relationship over two decades in a glaring public spotlight.

For us, the message here is clear: America is still negotiating who it is, but the icons of aspiration have changed. This isn't just about luxury and access, but also how we converse about love, and what it means to be in interaction with each other, our history, and our art. It is not a tidy or linear discourse. But it is no less important; given the many cultural nuances that collide here, at this particular point in time, it is probably more so.

"About Love" went live in full this week, though the campaign kicked off Sept. 2. It's supported by a print campaign, shot by Mason Poole, and spearheads films that will launch later this year, directed by Dikayl Rimmasch. Beside its launch, Tiffany's has pledged $2 million to scholarship and internship programs for Historically Black Colleges and Universities.