And started a whole new journey

As a young copywriter living in Cape Town in the late 1990s, I worked for one of South Africa's largest and most respected advertising agencies.

Back then, when smoking was still a "done thing," we had voted and agreed as an agency on taking a stand against tobacco—so, no smoking in the offices or promoting any tobacco products. As a vehement non-smoker appalled at the idea of using my powers to push an addictive and detrimental product on a young and susceptible audience, this arrangement suited me perfectly. Well, for the few months it lasted anyway.

One morning I walked into our office as normal, and immediately noticed that the old ashtrays had found their way back into all the usual stinky places. Later that day, our CEO announced some "wonderful news." We had won a major tobacco account that would bring a great deal of revenue (and, presumably, the smoking of cigarettes back) through our doors.

In my book, principles are only principles when they cost you something—a view I decided to immediately share and explain in an all-office email, circulated to the agency's thousand members of staff.

It wasn't long before I was summoned to the CEO's office—me thinking in order to be commended for my strength of conviction, or at the very least for so articulately expressing myself in my office email. Instead, he chose to declare (and in far less jubilant tones than when announcing our new-business win) that my career in the agency would no longer be going anywhere. This seemed a great pity, as I had been previously told by him—on more than one occasion—that my career was heading in a fabulous direction. Nevertheless, principles being principles and all that, I decided to resign, without a backup plan or any savings to fall back on.

Little did I know this apparent setback would ultimately be responsible for one of the great adventures of my life.

Track to 2004, six years later, when I was taking a load of underwater pictures for diving magazines. At the end of one particular shoot with a local freediver, we surfaced (removing our masks and hoodies) to instantly recognize each another as old colleagues. Roger had been the head of "interactive" during my time at the advertising agency. He immediately remarked: "Hey, didn't you resign over the whole smoking thing?" and then said I had earned the respect of many through the stance I had taken.

Next, Roger explained that he had recently been appointed leader of an overland expedition through 15 countries, starting in London and ending in Cape Town. On the spot, he offered me one of the eight places on his team, saying the project would require people of conviction and courage.

I spent the following 12 months working with UNICEF on community projects throughout Europe and Africa, travelling with incredible colleagues, having experiences of profound joy and sadness and brutality and beauty, and even befriending the president of a country. It remains one of the richest and deepest times of my life, and one I continue to process in certain ways.

One thing this journey taught me for certain was to always—always—stand up for my principles. There is nothing quite like the feeling of self-respect it provides, and it's amazing what can come your way when others feel your conviction, too. 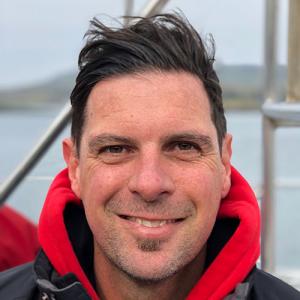