The Pitch That Went Horribly Wrong

What I learned from a complete misfire

Spoiler alert: This doesn't have a positive ending. The story arc isn't at all satisfying. Zero chance Netflix or HBO picks it up and turns it into a limited-run series—though I was once told I look a little like Matthew Modine.

Several agencies ago, I was working at a small shop with one good-size account and a handful of less-than-good-size accounts. A nice new-business opportunity came our way—a relatively well-known brand headquartered nearby was planning to test-market a new product in a growing category experiencing explosive growth and invited us to be part of a creative pitch.

We weren't awash in nice new-business opportunities, so we were particularly excited about this one. One of the agency principals had been in touch with the prospective client, and he was going to lead the presentation process.

After consulting with the client, our leader gathered the agency team and laid out the basic proposition as it was explained to him: This new product would be value-based priced, but given the brand's history and strong reputation for quality, we could make a credible case that the product would be equal to that of even our best competition.

The brief almost wrote itself. (Actually, in light of what happened later, I suspect the brief may have written itself.)

Given the potential impact this win could have on our tiny agency, we held nothing back. Everyone in our small but enthusiastic creative department had a hand in the work, and we far exceeded the client's creative to-do list. Moreover, we went out of house—a big deal for us—to produce three pretty slick, professionally voiced-over animatics, which, given the simple but powerful concepts, were actually damn good approximations of the how the final produced spots would have looked and sounded.

Each person on the pitch team was thoughtful in preparing his or her part, and we practiced. And practiced. Even the handoffs from one presenter to the next were a thing of beauty.

As for the actual content of our presentation, it was rock solid. Though prone to offering multiple solutions in pitches, here we had locked onto one. The strategy was focused, and the creative seemed to flesh it out perfectly and memorably.

Pitch Day came. We got to the client's offices early. All the technology checked out. The work looked splendid. Our pitch team looked splendid. We were ready. The client team filed in, though the one person we had been in touch with up to that point in the process was absent, having been called away.

We began the scheduled 90-minute presentation. A few slides into the deck, after the perfunctory reminder of who we were and glimpses of our past work for other clients, our pitch leader summarized the assignment we had executed:

We were to introduce the company's new product, making the case that, though value-based priced, it would deliver a level of quality that, up to that point, consumers had been forced to pay much more for.

As the lead creative on the project, I could feel my pulse quicken and my game face forming. I was up next, on the edge of my seat, ready to get up and take that handoff.

But the lead on the client side raised his hand.

"Sorry to interrupt," he said, "but where did you get the idea we were going to price this at the low end of the category? We'll be premium-priced. That's always been the plan. We think our brand can easily command that."

Time stopped. Our pitch leader calmly recounted his conversations with the client's point person, the person not in the room.

The senior client calmly listened, but reiterated we were strategically off the mark. Completely. The fact was, we hadn't asked the right questions, or listened well enough to the answers, or spoken to enough people in the run-up to our presentation. That was apparent to the clients and painfully apparent to those of us from the agency.

Since the sharing of the creative was next on the agenda, I'd like to report that I rose confidently and said, "We obviously misunderstood your intentions, but I hope you'll let us take you through our work. It will give you a chance to see how we think, how we translate strategy into powerful creative, and importantly, how much enthusiasm we have for this opportunity."

I would like to report that, but I can't, because everything after the client interrupting our setup is a blur. I do recall saying something about their having a chance to see our thinking process, and I know that, though stone-faced throughout, the clients allowed us to get through every slide in our deck. The Q&A never quite happened, but whether they felt sorry for us and were being gracious or simply saw those 90 minutes as a respite from other work they didn't want to do, the client team allowed us to make our case.

We didn't get the assignment.

Once we were safely out of the building, the pitch lead apologized profusely to the rest of the team. At that point there was nothing for us to do but write it off as a learning experience. A lesson.

What exactly was the lesson? Coincidentally, it's one that my current agency arrived at on its own, before I came on board and without ever completely whiffing on a pitch as my old place did:

The problem with pitches, we believe, is that they're entirely artificial situations, in no way representative of what a real relationship with the prospect would actually be like. Shootouts? No, they're guessing games. For everybody.

We've had much better success offering prospects initial strategic explorations. Lay out some possible paths forward that make sense, and explain exactly how we would go about executing a plan that would lead to dynamic work and solve the client's real problems. In the process, they get to know us a bit and they see how we work. And vice versa.

All in all, it's a much less stressful and much more productive way to pursue new clients. Still not the kind of high drama that would compel Netflix or HBO to sign on, but that's OK.

I don't look that much like Matthew Modine anyway. 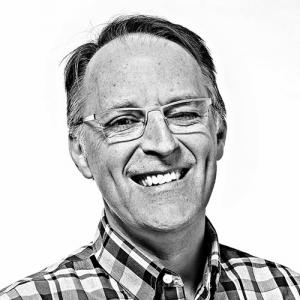