How My First Paying Design Project Truly Went Up in Flames

The logo, lunch and dinner menu from hell

There is something intrinsic in our capitalist system that adds the thickest, shiniest veneer of "official-ness" to art once someone pays for it.

If you're a musician, you're just taking up space in a garage unless someone is buying your records. If you're a painter, you're just a barista unless your work is in a gallery. If you're a designer, you're just an insomniac with awkward social tendencies unless you have "clients." It was during my sophomore year of college that this need for unquestioned market approval and validation put me on the hunt for my first paying project.

A used-car salesman by trade (and general lifestyle), my father mentioned he had "friends" who were opening a restaurant and needed some menu designs. This was my opportunity. My chance to rise above arbitrary, class-assigned drudgery and take on something that would be truly out in the world. Something that wasn't printed on the eternally half-broken Epson inkjet in the computer lab. Something I would be paid for. Art.

This first-ever freelance assignment was fairly straightforward: a logo, a lunch menu, and a dinner menu design for a new bar and grill. I was asked how much this would cost, and I—undoubtedly hyper-advanced in my knowledge of things like scope, estimating hours, revision limits and production charges—told them confidently: "$800."

For the next month, I worked on the logo and the menus in every free moment I had. Between classes. After classes. Late at night. You get the point. Also, you'd be surprised how slowly and inefficiently you work with only a handful of actual design classes under your belt. Or maybe you're not surprised. Yeah, you shouldn't be surprised.

The end result was a logo made with a poorly built, free font I found somewhere on the early Internet. It probably had a fun name like ReadyRetro.ttf or SuperMod_GrowTesk.ttf. Imagine the font collection from a bunch of late-third-wave ska CDs from 1995, but worse. It was objectively not good. And the rest of the menus were no better. I recall bad display fonts for menu items that were many point sizes too large, like the whole thing was designed as a highway billboard. And colors? It had 'em. We'll leave it at that.

Despite all of these technical, typographic and just overall design shortcomings, the client eventually bought off on the design, and we went into production. Staples was my print vendor. The total cost of printing and laminating was $785. Because I didn't have the basic wherewithal to add a production budget, I made $15 for my work. To be clear, that's roughly 25 cents an hour. The market had, finally, paid for my art.

As you may have guessed, none of the menus survived except as a possible line item in some casual insurance fraud. In retrospect, it was kind of a mercy killing.

As a life lesson, I guess you could argue cramming as much glorious failure into early projects is, in some ways, an efficient means of personal growth. Or you can simply take solace in the fact that your early freelance failures are not marked by a missing block in your hometown. 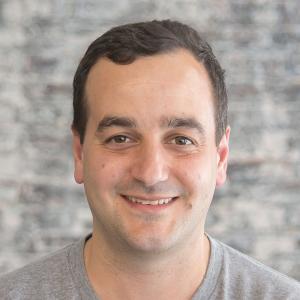