The Art of Failure at Wieden+Kennedy

It's a collaborative effort

Failure, in any creative endeavor, is part of the process. You need to try stuff, sometimes it needs to fail, and you have to be OK with that. The best creatives have short memories. They learn from each path taken, and move on.

Failure in advertising is unique in that it is often a collaborative effort. In 2006, I was part of a team of 12 in the Wieden + Kennedy 12 program—an advertising school within the Portland office. Because it was a school, it naturally had a culture of experimentation. This wasn't measured only in terms of the output, but in how the 12 of us worked together.

The program's director, Jelly Helm, made sure we were exposed to the agency's process and culture—the probiotics behind the work. We weren't employees, but we were made to feel part of the agency. We got to walk the office and observe how they worked with each other. We saw it wasn't lone geniuses toiling in dark corners. It was drafts up on walls, and open debates about ideas. It reminded me of my time in law school, where learning was open and "Socratic" among the entire class.

Early on in the program, I admit to struggling with this kind of collaboration—especially in such a large team. As a former editorial cartoonist and graphic designer, I was more comfortable working alone creatively.

Jelly enrolled us in an improv class. There was no "no" in improv. Everything, no matter how dumb or dead-end the idea passed to you, was an invitation to make it better.

A few weeks later, Jelly pointed to a large, empty wall near our space inside W+K. "Let's do something together on that wall," he said, "as a gift to the agency."

Over the next week, the 12 of us thumbtacked hundreds of ideas to the wall. Some of us ideated in groups, but mostly we worked individually. I remember working on my own. I put up maybe 50 ideas, none of which Jelly cared for. 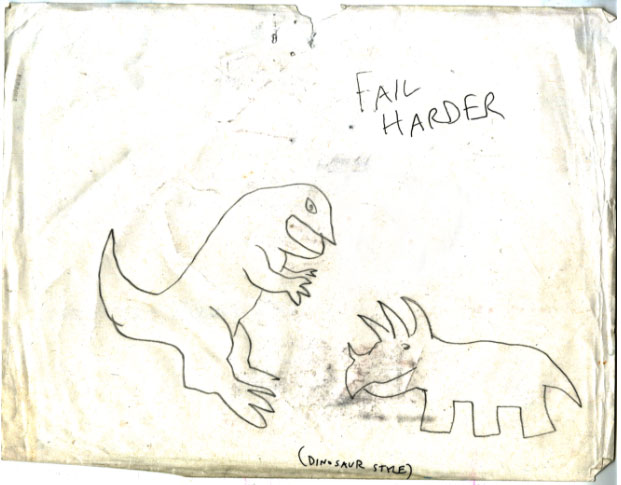 When I described my idea for a dinosaur mural with "Fail Harder" as the tagline—a memorial to the greatest failures of all time—Jelly politely nodded.

Jelly saw an invitation to the others. What could they bring to "Fail Harder"? As it turned out, quite a lot.

One person suggested subverting the tone of "Fail Harder" with a sophisticated script typeface. Another explored the idea of working in a medium that would make the wall shine—like beads, or glass. Others had noticed how the clear pushpins on the wall shimmered when bunched together. The group kept following this thread, experimenting in the aesthetics of office supplies. We put several bunched rows of clear pushpins in the wall as a test. It had an iridescence that could scale beautifully.

Quickly, a vision (and brief) began to emerge: Render "Fail Harder" in pushpin bling. On the Thursday before Memorial Day weekend, we outlined "Fail Harder" in a large, sophisticated script on the wall. On Friday, the agency came in and saw the first stage of our idea. We left out our tools and supplies, signaling we were not done.

Everyone assumed we would be filling the inside of the word. But to truly bring "Fail Harder" to life, we had to tempt fate ourselves.

Once the agency cleared out for the long weekend, we got back to work, except we would fill in the rest of the wall—leaving the inside of the words empty. This would require buying every box of clear pushpins in Portland, and driving them cleanly and evenly into the wall.

For the next 72 hours, the 12 of us worked in shifts. As a group we innovated quickly to perfect our process. We figured out the fastest way to put pushpins into a wall: Fill the end of an interchangeable screwdriver head with pushpin, and drive it into the wall. Reload and repeat more than 100,000 times. 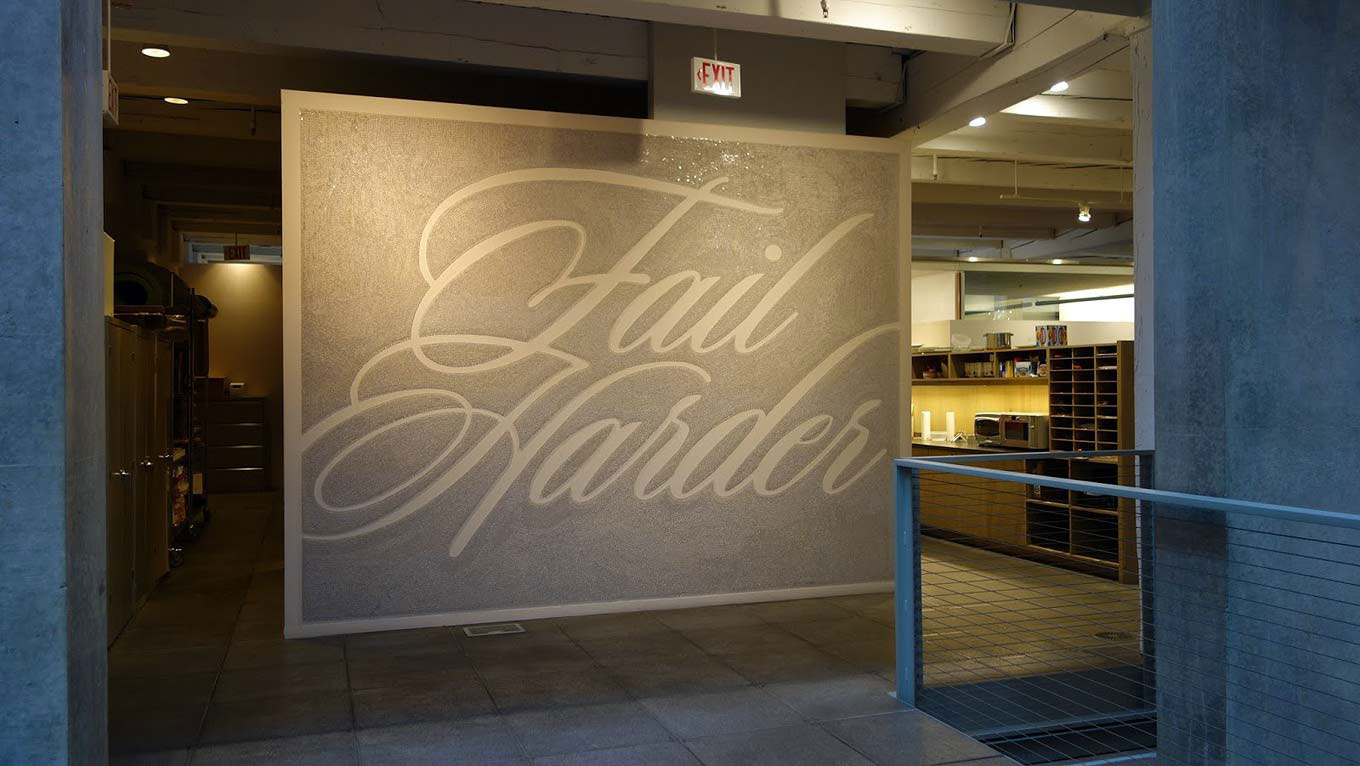 When the agency returned from the long weekend and saw the wall glowing with the sparkle of all those pushpins, they were astonished. As was I. I had forgotten my visions of dinosaurs. Never could I have concepted, or accomplished, something like this on my own. Standing in front of the finished wall, I felt the power of the group.

It demonstrated to me why agencies will always matter: the collaboration of talented individuals. A great agency is a safe place where one can fail, and share it with others.

The message of "Fail Harder" is to never hold back. Trust others around you, because they will show you a greater idea than you ever knew you had. 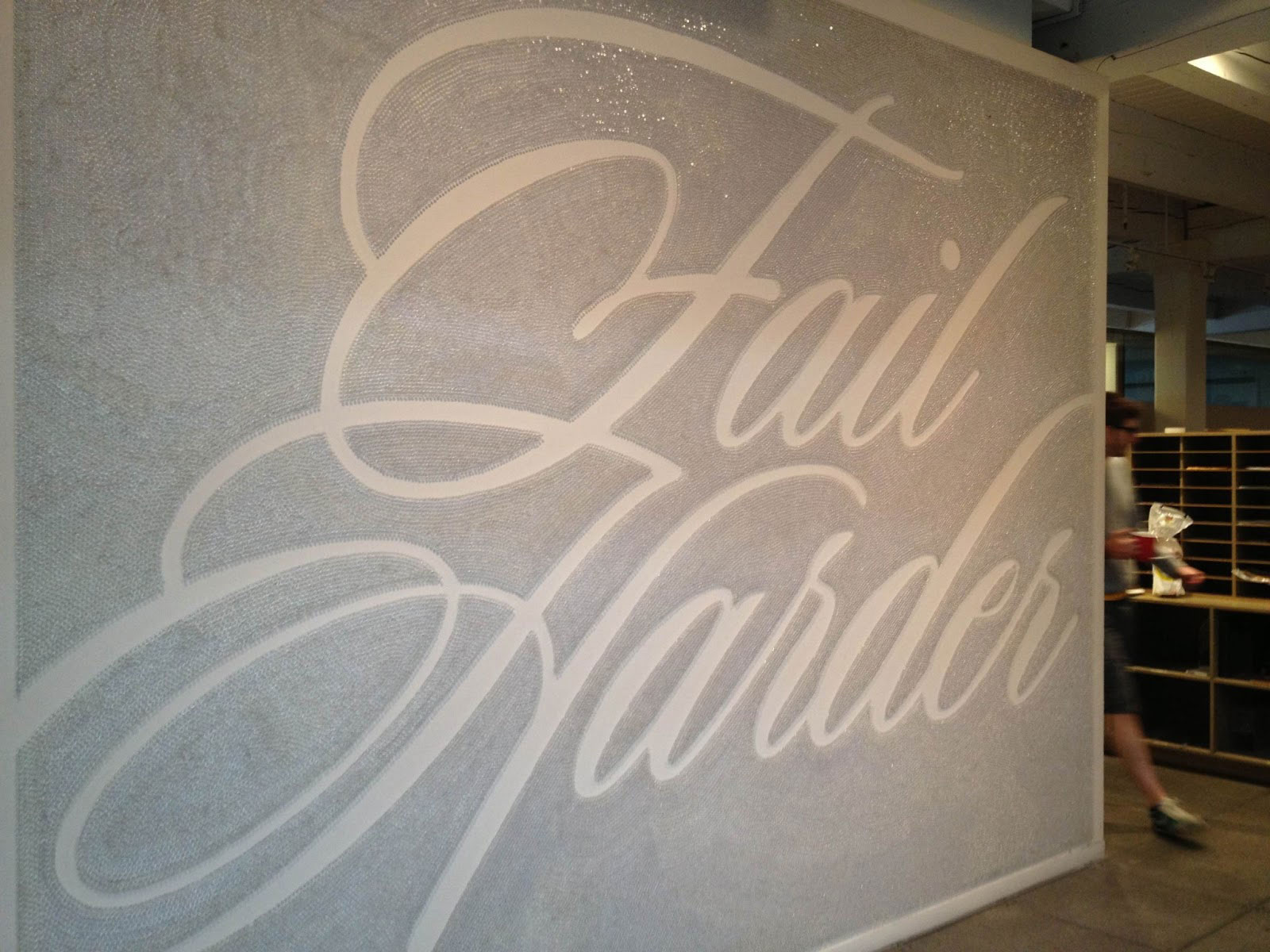 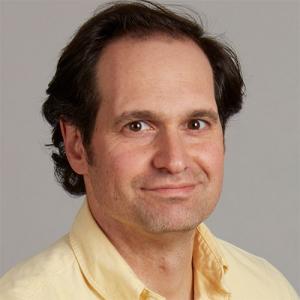