Eva Heiman, from Nagyvarad, Hungary, began keeping a diary on Feb. 13, 1944, her 13th birthday. She stopped writing a little over three months later, shortly before she was deported by the Nazis with hundreds of other Jews to the Auschwitz concentration camp in Poland, where she eventually died.

What if she'd been able to document her experiences on Instagram?

A wrenching series based on Eva's diaries will unfurl on the @eva.stories Instagram page this Wednesday and Thursday, marking Holocaust Remembrance Day in Israel. All told, more than 50 IG stories based on her journals will appear, with a new post every 30 minutes.

Technology entrepreneur and businessman Mati Kochavi produced the project with his daughter, Maya.

"We asked ourselves what would happen if Eva, instead of a pen and paper for writing a diary, had a smartphone and Instagram," he says.

Shot mostly on smartphones, "Eva's Stories" spins its narrative from the girl's perspective, as if she were always recording the action.

"The idea was to build the environment in which Eva lived and supposedly photographed what she was sending to her friends," Kochavi says.

This trailer from Leo Burnett, part of the project's broader publicity push in Israel that also includes billboards and influencer outreach, has generated nearly 300,000 views in its first day:

During the 24 hours of Holocaust Memorial Day, which runs from Wednesday to Thursday evening, still photos, texts and stories posted to IG will bring Eva's final months to life. Beginning with her carefree schooldays, viewers will watch her world turned inside out as the Nazis invade, move the Jews into ghettos and finally ship her off to Auschwitz. (The content also exists as a 48-minute film.)

The work boasts impressive period detail, from the spot-on 1940s fashions to the muted color scheme, which imbues the images with the melancholy feel of found footage dating back more than 70 years.

What's most striking, however, is how familiar Eva's world appears. At first, she laughs and jokes with family and friends like any schoolgirl from 2019. Later, when the German Wehrmacht rolls in and the horror begins, Eva's sense of fear is palpable. We share her sorrow as she must suddenly must navigate a world torn apart with little hope for the future.

"In her diary, Eva had expressed her dream of moving to London one day and becoming a photojournalist," Kochavi says. "We translated her diary into video clips, we gave her a smartphone instead of a camera, we published her writings on Instagram instead of in a newspaper, and we brought her story first to Israel and then to London and the rest of the world." 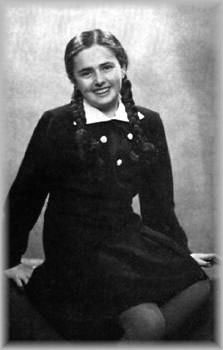 Given the universality of her tale—this could be the story of any young girl at any time in history, a member of any oppressed group—and the recent rise of ultra-nationalistic ideals in our present age, "Eva's Stories" offers a heartfelt, timely warning. (The hateful, anti-semitic nature of some IG commenters should give us all pause.)

Lest anyone forget, the Holocaust, engineered by Germany's Adolph Hitler during World War II, claimed the lives of some more than 6 million European Jews. In recent years, conspiracy theorists and Nazi apologists have sought to retroactively minimize the event's impact, in many cases by quibbling about the exact casualty figures, or even claiming that the death camps weren't really so bad.

In point of fact, it was genocide waged by a maniac, a bloody stain on our humanity. All genocides deserve our tears. Each and every one should be remembered.

"We were trying to reach a relatively young generation of people: 13- to 30-year-olds for whom Instagram is their main platform," Kochavi says. "We wanted to reach them on the platform that was most native to them and convey Eva's story in a way that would resonate powerfully with them. We understood we had to reinvent the way the Holocaust story is told and make it tangible."

"In the digital age," he adds, "given the dwindling number of survivors, it is imperative to find new models of testimony and memory."

As for digital word of mouth, the project got a boost when re-elected Israeli prime minister Benjamin Netanyhu posted about Eva's Stories on his official Instagram: