How Snoop Dogg Went From Hip-Hop Legend to Web3 Royalty 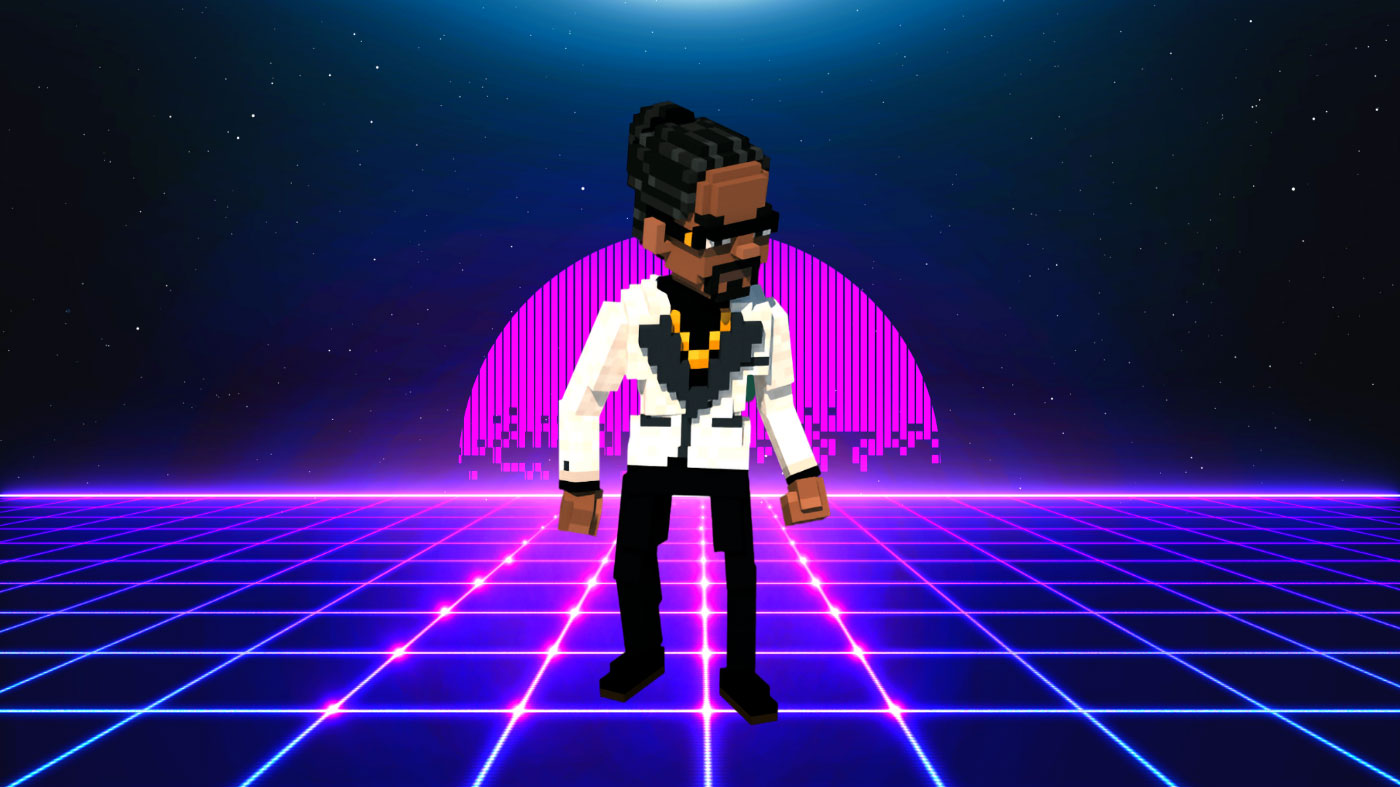 From the time we first laid eyes on him, and heard that silky smooth SoCal drawl, it was obvious that Calvin Cordozar Broadus Jr., aka Snoop Dogg, was the real deal. How real? There are billion-dollar brands that would kill for his credibility, authenticity and staying power as a generational influencer across multiple decades.

He did it, of course, with smart moves, hard work and personality as big as the Pacific. As a result, we're going on 30 years of watching Snoop wield the kind of influence that comes with always being the coolest person in the room.

Who knew that all those times we thought Snoop's mind might be getting a little … hazy, he was turning his love of technology into an expansive portfolio.

His appearance in numerous video games was the opening act to Snoop's emergence in almost every key area of web3, along the way picking the right projects, buying the hottest virtual properties, and understanding how to sweeten his own NFT collection with utility that is genuinely priceless.

Let's break down some highlights from his other career.

Play On Playa One 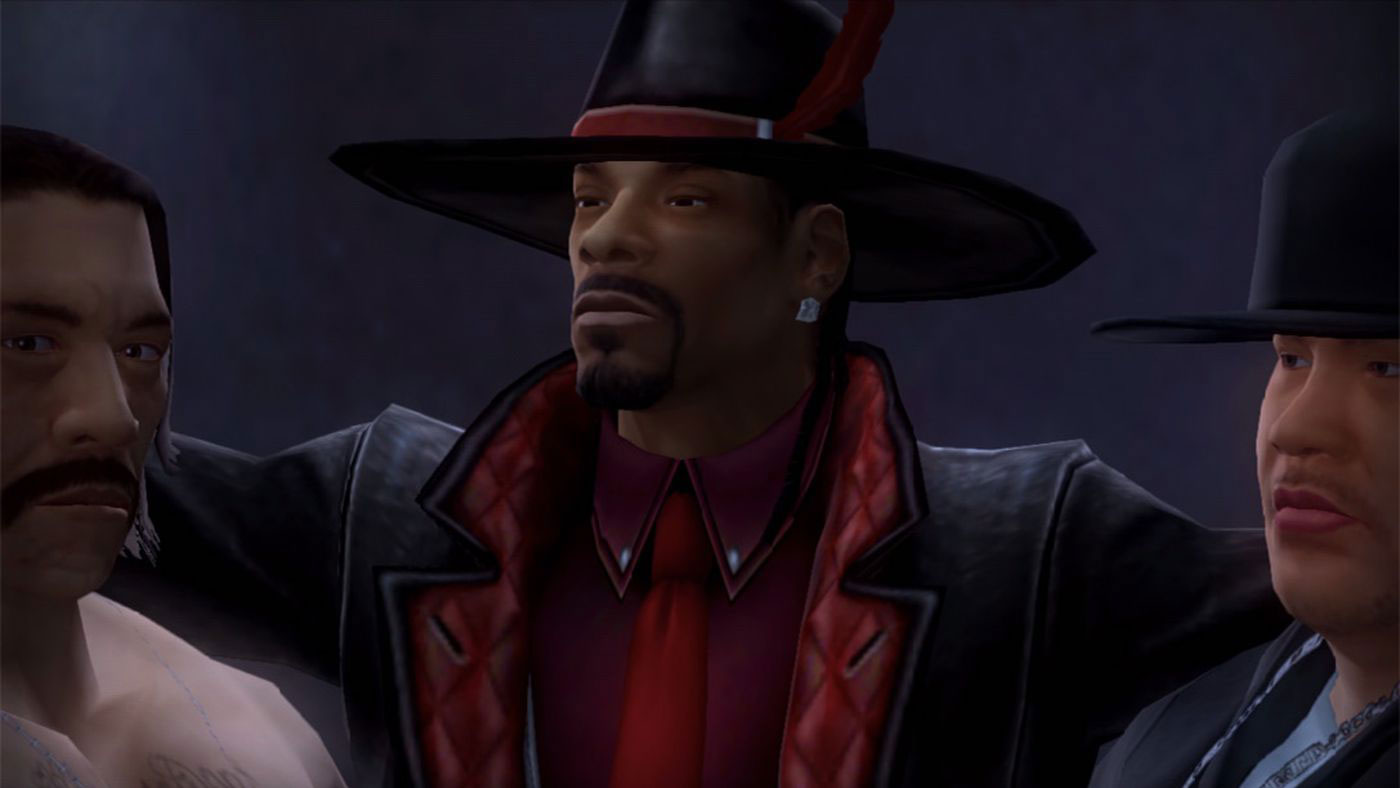 The number of video games in which Snoop has appeared is just insane. But even more impressive is how many game genres the man has covered during his time inside our PCs and consoles. It's a deep roster of game styles, including: fighting (Tekken Tag Tournament 2, Def Jam: Fight for NY, UFC 3), football (Madden NFL 20), life simulator (The Sims 4), mobile gacha (Family Guy: The Quest for Stuff), open world action-adventure (True Crime: Streets of LA), eponymous-rhythm-side-scroller (Way of the Dogg) … the list goes on and on.

And that doesn't even include Snoop's greatest coup, and the most original idea to come out of EA Sports in a good long while:

For most, this would have been mere wish fulfillment—a famous person who loves video games getting to be in them. But Snoop's deep roots in the game industry helped him build his network, as he rubbed elbows with tech's best and brightest. Many of whom would go on to build the foundation of the metaverse, introducing the masses to NFTs and other innovations-in-waiting.

He's Just Going Through a FaZe 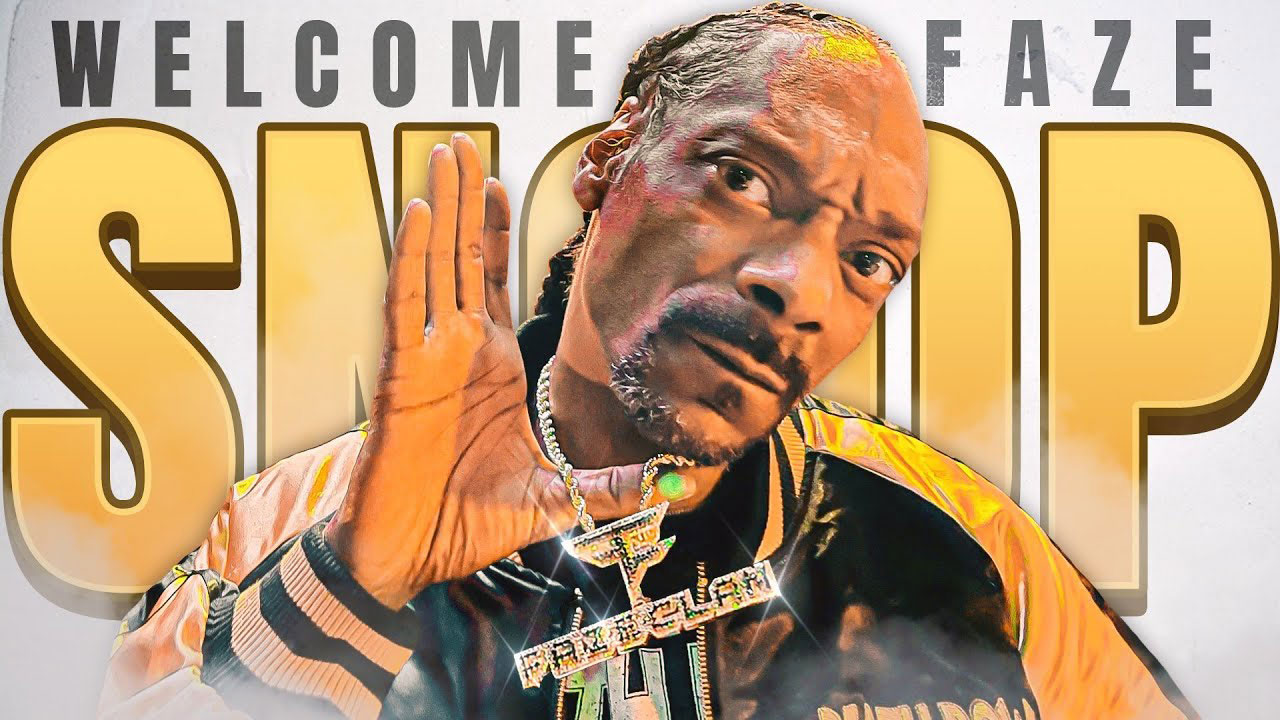 With all due respect to the world's most famous esports lifestyle crew, bringing Snoop on board into FaZe Clan as a content creator instantly raised the organization's cool factor. The partnership was a smart move for both parties. FaZe got the credibility of working with an artist who has been connected to pro and college sports for decades (helping position them, and esports in general, as a "real" sport), and Snoop got a chance to connect directly to the next generation of DOGG Pound residents. Win-win. 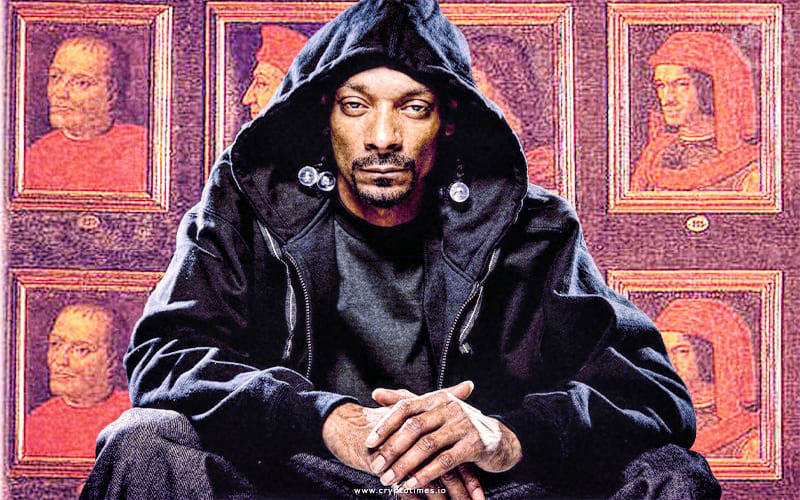 It was late summer 2021 when Twitter began buzzing about the feed of a wealthy European crypto-enthusiast who went by the absolutely wonderful name Cozomo de' Medici.

Charming and opinionated, Cozomo quickly won the hearts and minds of digital art lovers with his witty takes on web3, and more importantly, his highly impressive collection of NFTs, which at the time was valued at over $17 million.

As we now know, keeping a secret in a decentralized world is pretty much impossible. So it didn't take long for sleuths to trace the multimillion-dollar collection to its wallet owner, learning that Snoop has a life outside of music and discovering that his moonlighting gig includes amassing a highly impressive collection of NFTs.

(If you're like us, you've wondered what Snoop's private life is like. And now you know—it's settling in for the night, clicking furiously all over OpenSea until the sun comes up … all while wearing a silk robe, ascot and velvet slippers.)

Viewing the Cozomo wallet also revealed a passion for the work of Larva Labs, with rare Cryptopunks and Meebits accounting for most of the $17 million value. 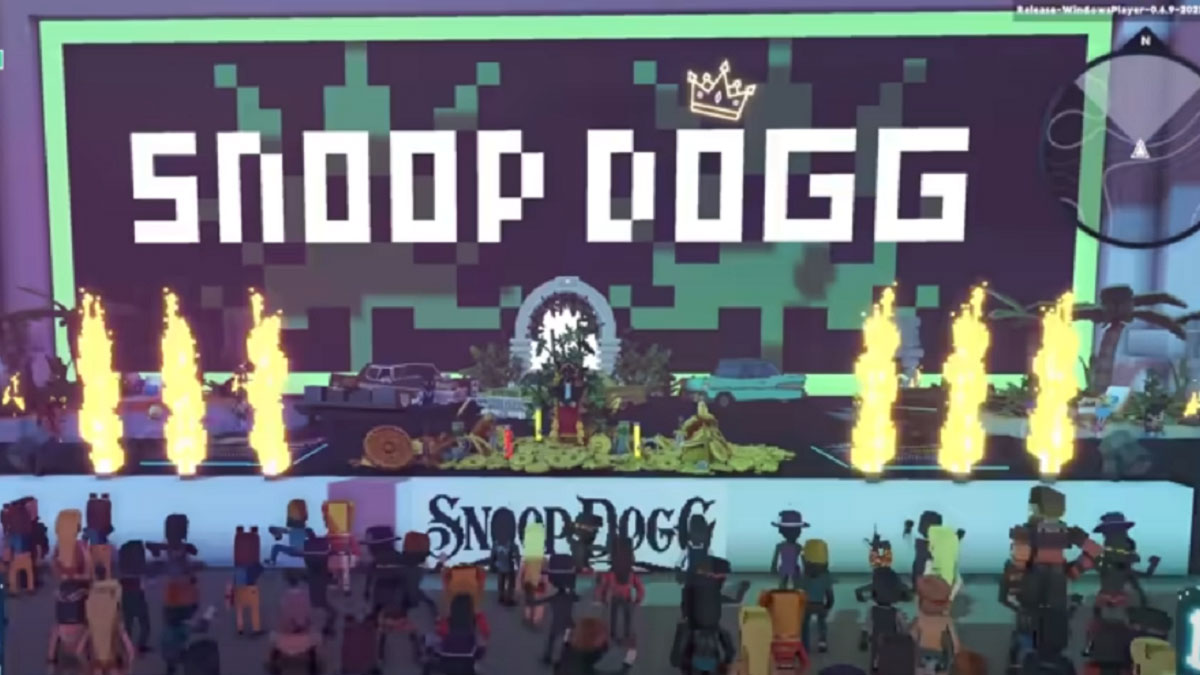 Snoop Dogg's 2021 partnership with The Sandbox started out innocently enough. But then came word that Snoop Dogg was building a Snoopverse. It would be an immersive digital world that embodied the man's lifestyle—and YOU could be a part of it. Yes, You!

This then got crazy—1,000 NFTs were minted, with owners receiving VIP access to the Snoopverse launch party, and a digital taste of the Snoop lifestyle, which included a chance to have your avatar in the video for Snoop Dogg's metaverse music video release, "House I Built." The video, incidentally, was a tribute to his own success inside the metaverse and was shot entirely inside The Sandbox. A first for the music industry.

Of course, celebrities and music artists had been holding events in VR, Fortnite and Roblox for a while, but this was so much more ambitious. It served as further evidence of the man's commitment to web3 … and that he just gets things done.

This was Snoop doing the things that everyone was still only talking about. With this idea, he took multiple core elements of web3 — NFTs, the metaverse, avatars, digital ticketing—and seamlessly blended them together for an event that many believed was still years away. 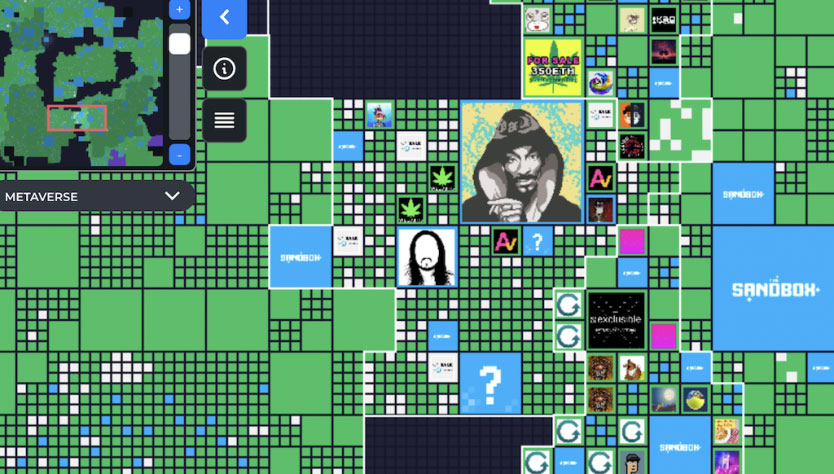 When Snoop Dogg put down stakes inside the growing virtual world The Sandbox, the land owners were justifiably excited. With a global superstar like Snoop on board, it would bring more attention to the project, and might even drive up the price of SAND, the currency used in-world/in-game.

Always the entrepreneur, Snoop almost immediately began selling parcels of land within his Sandbox property (which had by now been dubbed "the Snoopverse"), including MIGOS, who uses the space to house and exhibit his Apes in Space NFT project, and Aoki's Playhouse, the brainchild of music producer Steve Aoki.

The timing of all this Snoop-related activity couldn't have been better for The Sandbox, who were locked in a fierce rivalry with the other main world in the metaverse, Decentraland (home of the high-profile Metaverse Fashion Week). 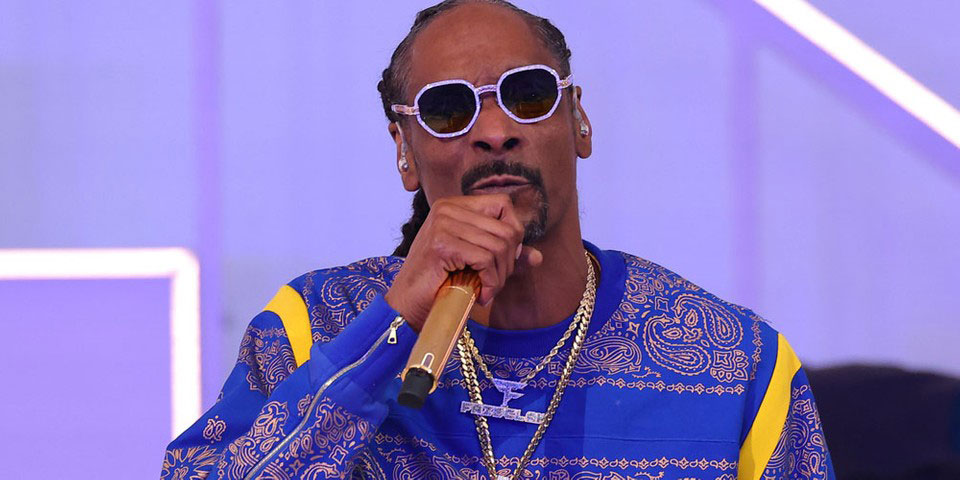 When the news broke that Snoop had purchased Death Row Records, the label that helped launch his career, it made for a feel-good story. Not just because it was the rebirth of one of most beloved independent music companies in hip-hop history, but because it felt like the end of a true rags-to-riches story that brought a beloved artist's life full circle.

But there was another surprise in store for hip-hop fans. With Snoop in charge, it was going to be anything but business as usual at Death Row, tossing out the old system  and turning the company into an NFT record label.

Snoop says becoming an NFT-based label is a chance to give something back to the fans via exclusive VIP experiences, artist meet-and-greets and early access to new music. As for the artists themselves, there's a chance to cut out the traditional publishing model that cannibalizes artists' royalties and other vital sources of revenue, giving them greater control and compensation for their creative efforts.

Snoop was the man in control, and he wanted to share that control with young artists on the rise. 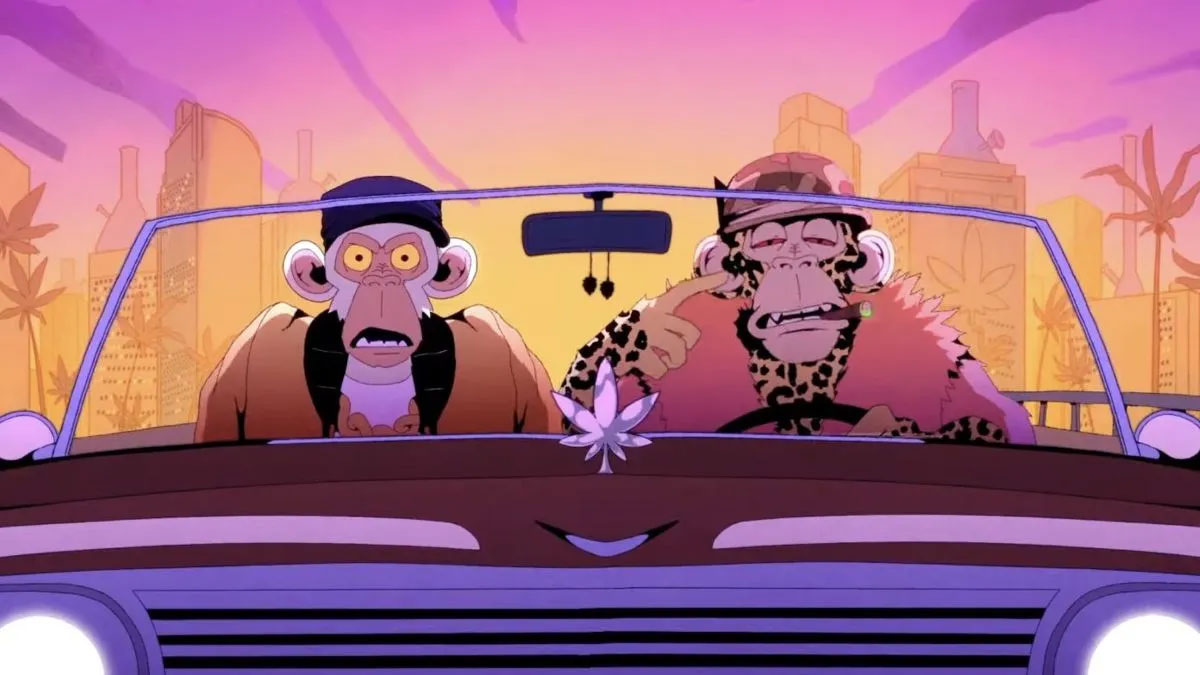 Most recently, Snoop took to the stage alongside fellow rap legend Eminem, with a metaverse-focused performance at the 2022 MTV Video Music Awards. No great surprise that they would pop up at the VMAs—the pair had a new single to plug, and were still basking in the retro, KDAY Back in the Day love generated by the Super Bowl halftime show in February.  What did create all kinds of buzz was how the pair incorporated their Apes—Bored Apes, that is.

The hip-hop duo first appeared on stage, filling the Prudential Center with copious amounts of weed smoke, just chatting about their day. Then, in a flash, Snoop and Em were on screens in homes around the world, but now they were animated—transformed into the simian stars of the Bored Ape Yacht Club. The same Bored Apes each just happens to own. They did their entire performance as Apes from this point on. Impressive.

Reviews of the performance ran hot and cold, but there was near universal agreement that the VMAs proved a point … while most NFT projects continue to play checkers, the BAYC is busy mastering 5-D chess, with original content and high-profile performances to a global audience. And on the night of the VMAs, Snoop would deliver a cultural moment for the BAYC community, and NFTs in general. And water cooler moments like the VMAs are simply invaluable.

Here to Stay and Play

Snoop's not here to simply cash in on a trend, moving on to the next thing the moment his paycheck clears. Instead, he is playing a vital role in building the industry—using his creativity, fame and reputation to shape the future of gaming, esports, entertainment, web3 and whatever the Dogg believes is next.