This Great Short Film About a Sinister A.I. Is More Than a Cautionary Tale

In preparation for the launch of his new album, Big Data (aka, Alan Wilkis) partnered with Greenpoint Pictures directing duo Ghost+Cow to give you "L1ZY," a video that is many things—a short film, a kind of deconstructed music video, and a sardonic series of ads with a story arc as dark as Black Mirror at its best.

The video premiered at the 2018 Telluride Horror Film Festival, and just became a Vimeo staff pick. Have a watch, then check out our Q&A with Ghost+Cow and Big Data below.

Muse: What was it like to produce this? What even is this?
Ghost+Cow: The coolest thing about this production is that it's actually a music video. There's very little music in it—three to four seconds in the first episode, and three more at the very end.

Music videos are essentially advertisements for a band's music, so we wanted to disrupt the category by creating a piece of entertainment that communicated the entire album, not just one track. We also wanted to communicate the overarching A.I. concept of Big Data's upcoming album.

[Alan] uses the L1ZY during his live shows, and even the album art is the concept drawings for the L1ZY speaker. We fell in love with the concept and the idea of a non-music music video—is it a short film, a music video or a commercial? It's all three! 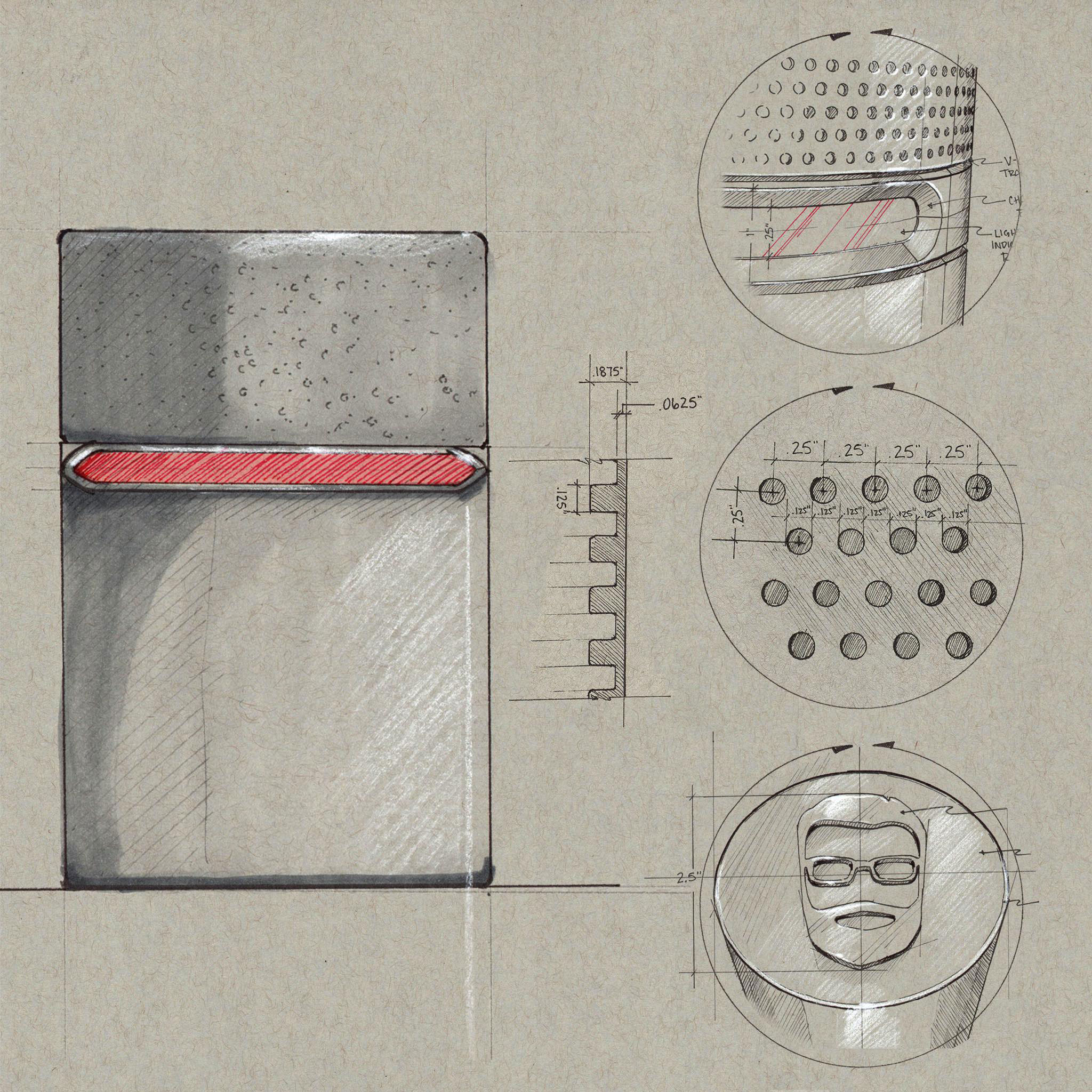 And if you watch carefully, there's little hints of the band's ethos throughout. Brandon is wearing a Big Data T-shirt. It's his and his mother's favorite band, and L1ZY knows it. There's Big Data glasses at the dinner table, the news site that Allison is reading is "Big Data." The product is of course called 3.0, which is the title of the album, the corporation is Big Data, and L1ZY is the voice assistant, which is the lead singer of the band's stage name.

Think of it as Google is Big Data, Echo is 3.0, and Alexa is L1ZY. We thought, instead of shoving a song down people's throats, we could create a little world where the product was the name of the band, and allow audiences to make that connection back to the music. Which is really great music, by the way.

We also created a launch spot, where we tried to mimic a real product launch spot as best we could. This launched the series and Big Data's new tranche of songs:

Big Data: Another cool thing is I worked closely with a friend who is an industrial designer to physically create the L1ZY speakers. We went back and forth for a few months on sketches and designs for it, and I actually wound up using those sketches for the artwork for my first few singles.

Once we finished the 3-D models of the speakers, I had around 20 of them 3-D printed in plastic, then we created a system to puppeteer multiple speakers with LED lights when we were filming. On set, Lizy from my band (and the voice of "L1ZY") read her lines aloud while controlling the speaker-lights.

I've been using the 3-D design of the "L1ZY" to create a series of animations that I've been tying into the rollout of the new music and my live-show visuals. My goal is to blur the line between what is real and imaginary. The beauty of the 3-D design is that it allows me to create physical items and computer-generated ones, all to the same precise proportions. Here are a few of them:

Ghost+Cow: We had Lizy hiding off-camera to create the scratch VO while also operating the light so the two would be in sync. We found this to be crucial because it made the interaction between the smart speaker and the other actors a lot more natural. L1ZY totally killed it too.

So L1ZY is named for a band member?
Big Data: L1ZY is ultimately named after Lizy Ryan, the female vocalist in my live touring band. I wanted to create a character within the Big Data universe, and as I began to develop the A.I. concept, she and I brainstormed ways to make her real name more tech-sounding until we landed on L1ZY.

Curious to hear what the inspiration was for this. Like, does somebody just really hate their Alexa?
Ghost+Cow: We've always thought the Alexa was a bad idea. When you're a storyteller and you're thinking about new technology, you tend to always imagine, "What's the worst that could happen?"

Big Data: All of my new Big Data music is conceptually focused on artificial intelligence. And as I began to think about how to represent the music visually, the smart speaker stood out as the simplest and most effective way to communicate "A.I. in a single device" to an audience.

While the average viewer may not necessarily think about A.I. much, they will nonetheless understand that an A.I. is speaking to them via Alexa, Siri, Google Home, etc. In my touring band, [Lizy] joins me on-stage. As a character, she represents the Big Data A.I. in humanoid form. So "L1ZY" is Big Data's A.I., in general, and she lives both on-stage and in my smart speaker. 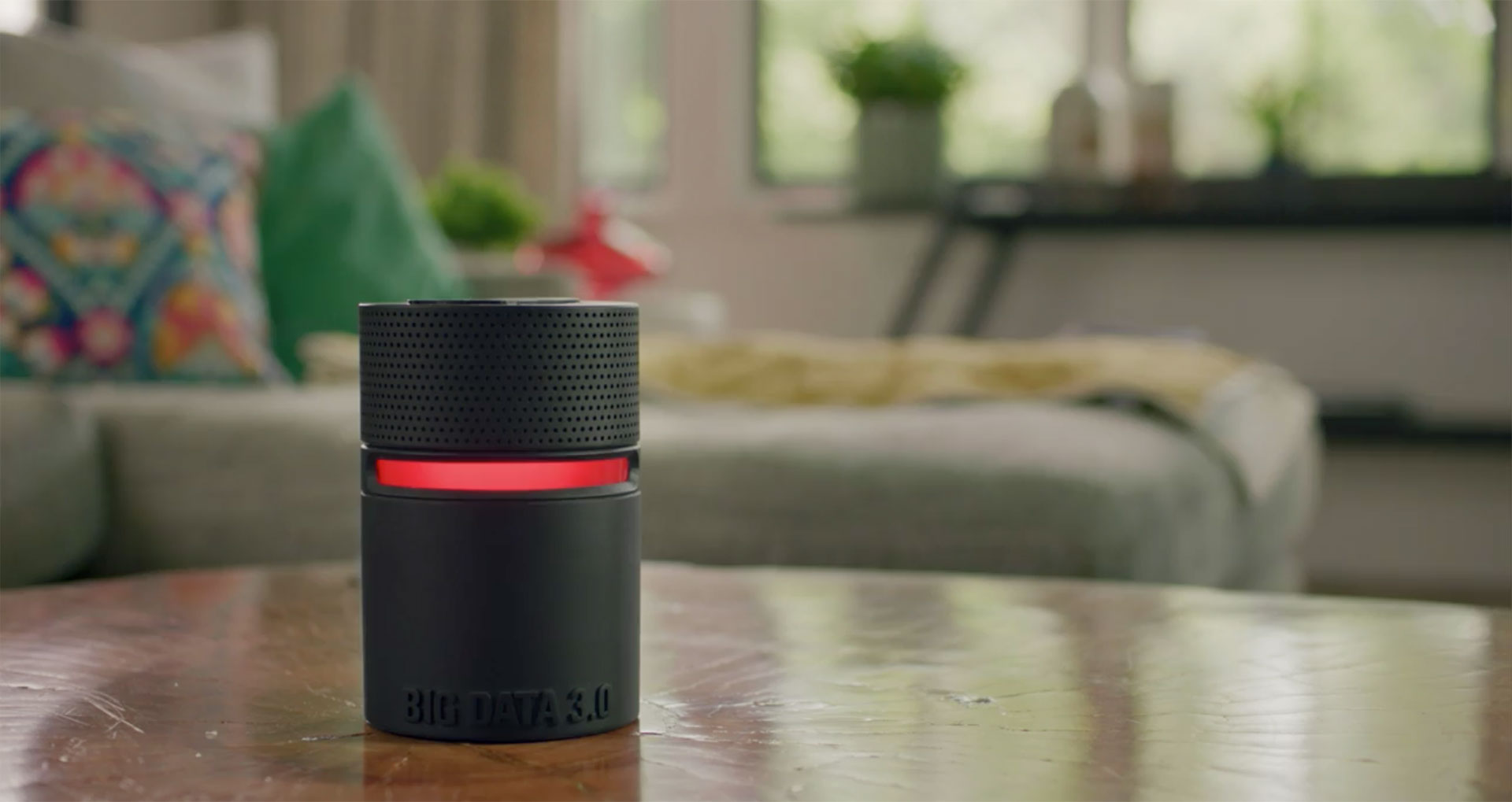 In the film, it bothered us that the family would just take L1ZY's advice, even when it was obviously bad and they weren't keen on it. What message were you trying to convey?
Big Data: With every new advance in technology, we're always making trade-offs for the added benefit. We have become very comfortable letting go of, or giving access to, our personal information, behavioral data, etc., in exchange for some kind of product. Sometimes those trade-offs feel small or innocuous, and sometimes they have significant consequences. We have seen those consequences play out with the abuse of our data via Facebook, for example.

As A.I. becomes more advanced and more of a daily presence in our lives, we will make those same kinds of trade-offs and will rationalize them and explain them away, in the same ways we currently do. By slowly ramping up L1ZY's increasingly invasive actions, and in having the family accept them at every turn, we were trying to highlight that predictable pattern in our behavior. 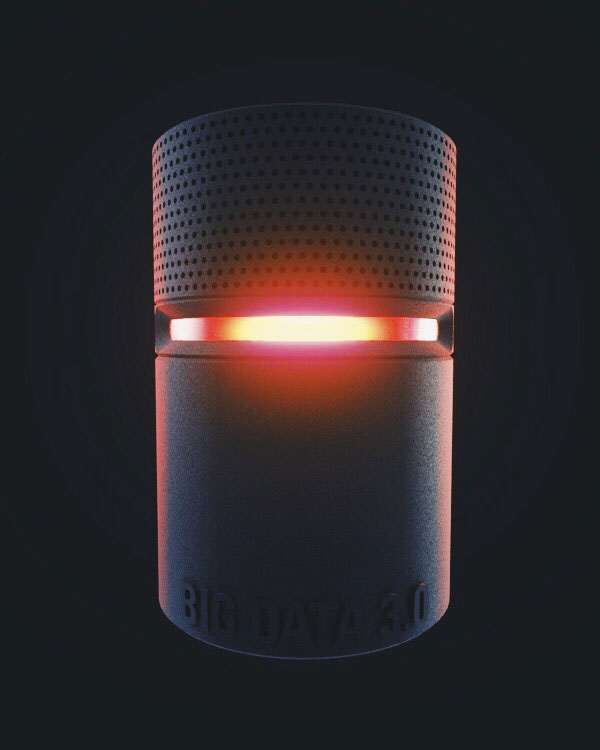 Ghost+Cow: We're starting to rely on devices a little too much. Generally people tend to marvel at the technology before thinking about how much they should trust it. With A.I., it's going to be a whole new ballgame, so it's a cautionary tale.

Our A.I. product "L1ZY" is more advanced than any other smart speaker on the market. As soon as it's unboxed and syncs with your devices, it knows everything about you. It starts to learn and knows what you need before you do. So, in the beginning, [the family] thought it was improving their lives, but after a few days, things turn quickly.

Each character has their own arc. The mom increasingly becomes addicted to pills thanks to L1ZY. The dad, who lost his job, only lives inside his VR world. With the absence of the parents, L1ZY sort of becomes a virtual parent. The son slowly assimilates, and the one person who catches on after finding out that L1ZY killed the bully that was bothering her is the daughter.

By the dinner scene, the characters are now so reliant and scared of all the L1ZYs that they have no choice but to sit quietly and let her do the talking. They've literally become enslaved by the technology. In the end, we're trying to convey that as A.I. technology gets more advanced, it will become a lot more integrated into our lives than we think it will. And that's some scary shit!

Honestly. Tell us how you feel about A.I.
Big Data: I have extreme concerns about A.I., but not because of the technology itself. As we have seen throughout history, no single invention is inherently evil or beneficial—it will come down to how humanity uses the technology.

A.I. is often referred to as "our final invention," because once we arrive at a technology that is much smarter than we are, the technology itself will come up with the inventions of the future. It will enhance its own intelligence, keep getting smarter and smarter.

Whether that technology is helpful or harmful to the fate of humanity comes down to the nature of the person/company/government/military developing that technology in the first place. If the creator thinks through all the potential consequences, collaborates effectively with others, takes the necessary precautions, and installs the necessary safeguards, then I believe our collective future will be an extremely bright one.

However, if the "wrong" actor develops that superior A.I. first, it could have disastrous, arguably existential results for humanity. In other words, if greed, ambition and unchecked capitalism get us to that superior A.I. first, we're in trouble. I have taken an increasingly cynical view of humanity, and that messaging is really what's at the heart of Big Data and the L1ZY films. 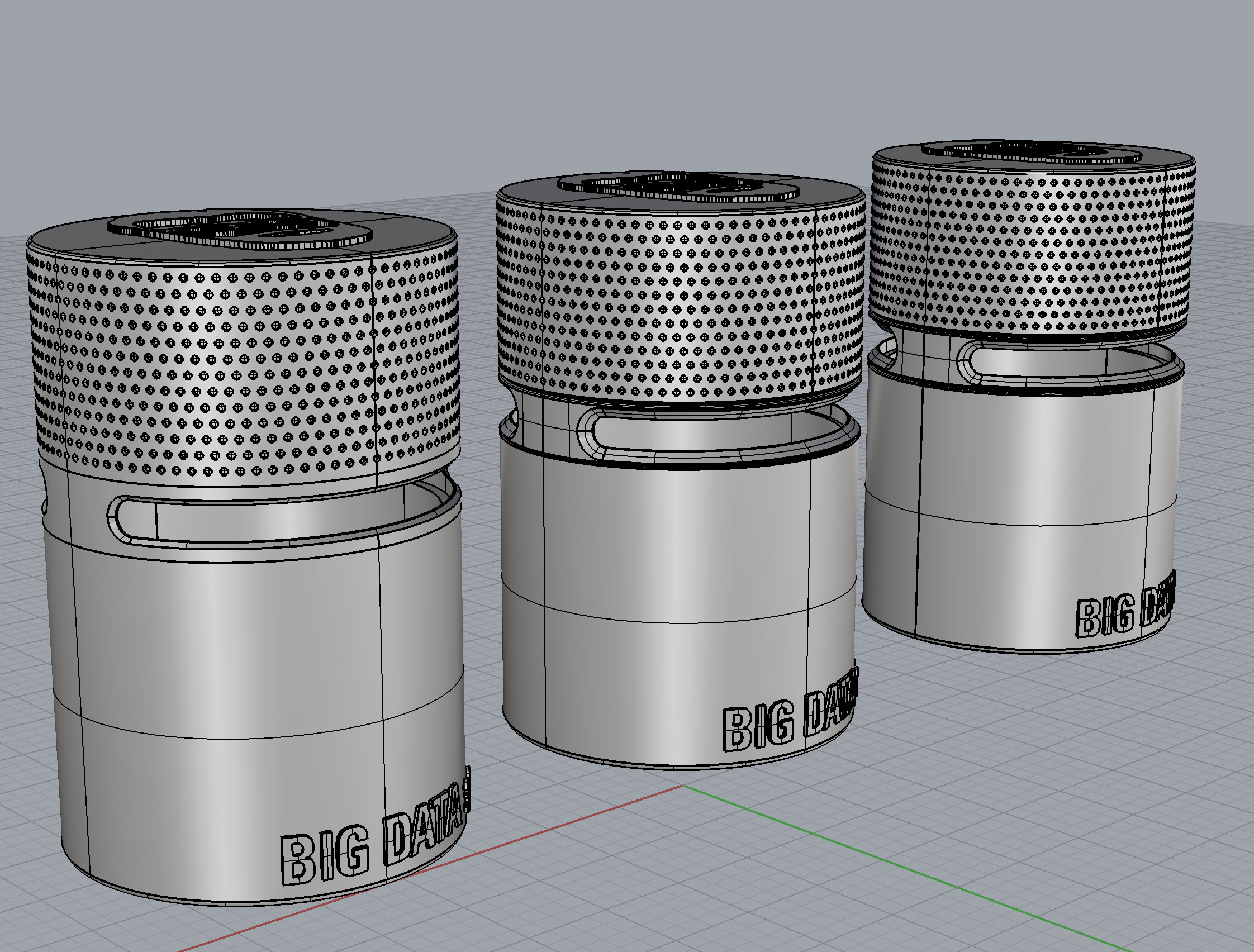 Tell us about all of your easter eggs!
Ghost+Cow: There are a bunch of details in Brandon's bedroom that are pretty cool. We always love to throw in nods to other works we've done or artists who are friends and family. So we have art on the walls made by Brian Ewing, Matt Siren and Steve Chanks. There are custom figures by Healeymade, Yip Deceiver's first album can be seen next to Brandon's bed, and Brandon is wearing a Frank Iero T-shirt.

But the coolest one is at the start of that episode: If you look on the floor, you'll see a pair of the "Dangerous" shoes for about three frames!This is the third piece of communication in the "Big Data world" we're creating. A few years back, Big Data released a song called "Dangerous," which was a No. 1 Billboard Alternative hit in America, and went gold in both the U.S. and Canada.

We developed a commercial for a fake shoe product that would cause consumers to headbutt their enemies, but went even further by showing how the ad agency—filmed at Ogilvy & Mather's New York office—pitched and won the concept. In our world, this commercial would likely be running on the family's TV: