His creative obsessions, from Talking Heads to Raising Arizona

Before co-founding Muh-tay-zik / Hof-fer in 2008, John Matejczyk held top creative positions at agencies including Goodby, Silverstein & Partners, Fallon and BBH, where he worked on brands including HP, Citi, "Got Milk?", Netflix, H&R Block and Snickers.

At Muh-tay-zik / Hof-fer, which he's described as his ultimate creative project, Matejczyk has led creative teams to create influential campaigns for clients such as Audi, Netflix, SoFi, AAA, the Golden State Warriors, Method and many early-stage tech companies.

Muse spent two minutes with him to learn more about his background, his creative inspirations and recent work he's admired. 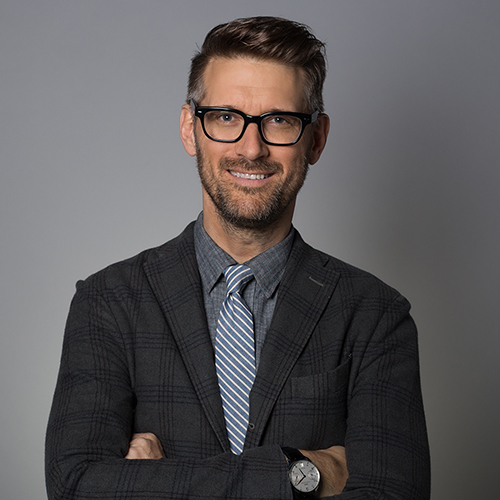 My sister is an amazing artist—and now genius author. She could draw brilliantly from a young age, so she was the creative one. I had no such talent or encouragement. My sense of humor developed like anyone's ... as a way of compensating for family dysfunction.

Growing up in the Chicago suburbs of the '80s, we would often drive into Chicago and watch the Talking Heads film Stop Making Sense. I loved it. So I guess David Byrne gets the nod.

I was a disgruntled business major in college. Their view of the consumer was a mechanistic member of the mass market that didn't reflect my experience of humanity at all. I was considering taking time off. Then one family Thanksgiving, my brother-in-law, who was an art director in New York at the time, said, "Hey… your letters are really funny. You should be a copywriter." I had never heard of a copywriter, but when he told me, I knew I would do anything to get there. He was my portfolio school.

First concert: The Cars. Favorite band is still likely the Talking Heads, but I've been on an Americana bender for the last few years, listening to a lot of A.A. Bondy, Emmylou Harris, Lucinda Williams. I've always been drawn to moody vocalists. The Blue Nile is an old fave.

Howard Finster. A self-taught preacher who did album covers for Talking Heads and R.E.M. We own one of his American flag series. My wife just called him up when he was still alive and asked him if he would paint another one for me and he said, "Sure." We need to get it in his catalogue raisoneé, if he has one.

H.I. McDunnough. He becomes the hero only by way of confession, which is available to us all.

A Prayer for Orion: A Son's Addiction and a Mother's Love, by Katherine James. I finished it last night and I was just gutted, yet completely hopeful. Full disclosure, Katherine is my aforementioned sister.

I have an obsession with Raising Arizona. When I saw it in college, my jaw dropped. I've never gotten over it. There's so much more than meets the eye, yet what meets the eye is full genius on its own.

The H&R Block campaign from 2000, "Worried About Bill." All the work got killed literally in the pre-pro meeting by legal concerns, yet we had talent, location, shoot days all booked. We called a pre-pro time-out with our not-yet-famous director, Craig Gillespie, and my partner Rick Casteel. We devised a series of vignettes that we could add to as the shoot unfolded, went back inside and sold it to the client who had no other options. Over the shoot days, the concept just kept growing. We were writing with the camera rolling, shooting twelve :15s that we put together as a serial. So many stories came out of that, but Craig went on to MJZ and my partner and I went on to Goodby from Y&R Chicago. Career changing. Gold, Gold, and Silver at The One Show, but I don't remember doing particularly well at the Clios.

Runaway Train 25. Years ago, we had created Slavery Footprint with funding from the State Department, which took off around the world, changing laws and radically reframing what the world knows about modern slavery. It also drew a creative team here from Australia. They are the ones who came to me with the idea of remaking the famous Soul Asylum video with modern geo-tech to help find locally missing kids. It was a massive, massive undertaking.

Someone else's creative project that inspired you, years ago.

When I saw "Aaron Burr" for "Got Milk?" the first time, I couldn't believe it came from the same industry I was working in. Same goes for Nike's "Angry Chicken" and "It's Miller Time" from Fallon. People don't realize how radically different the great agencies of the time were from the rest of the industry. Now, great work can come from anywhere.

Filmmaker. Richer or poorer, who knows?