Gran Fury's influence on her work, plus a look at her recent Pride campaigns 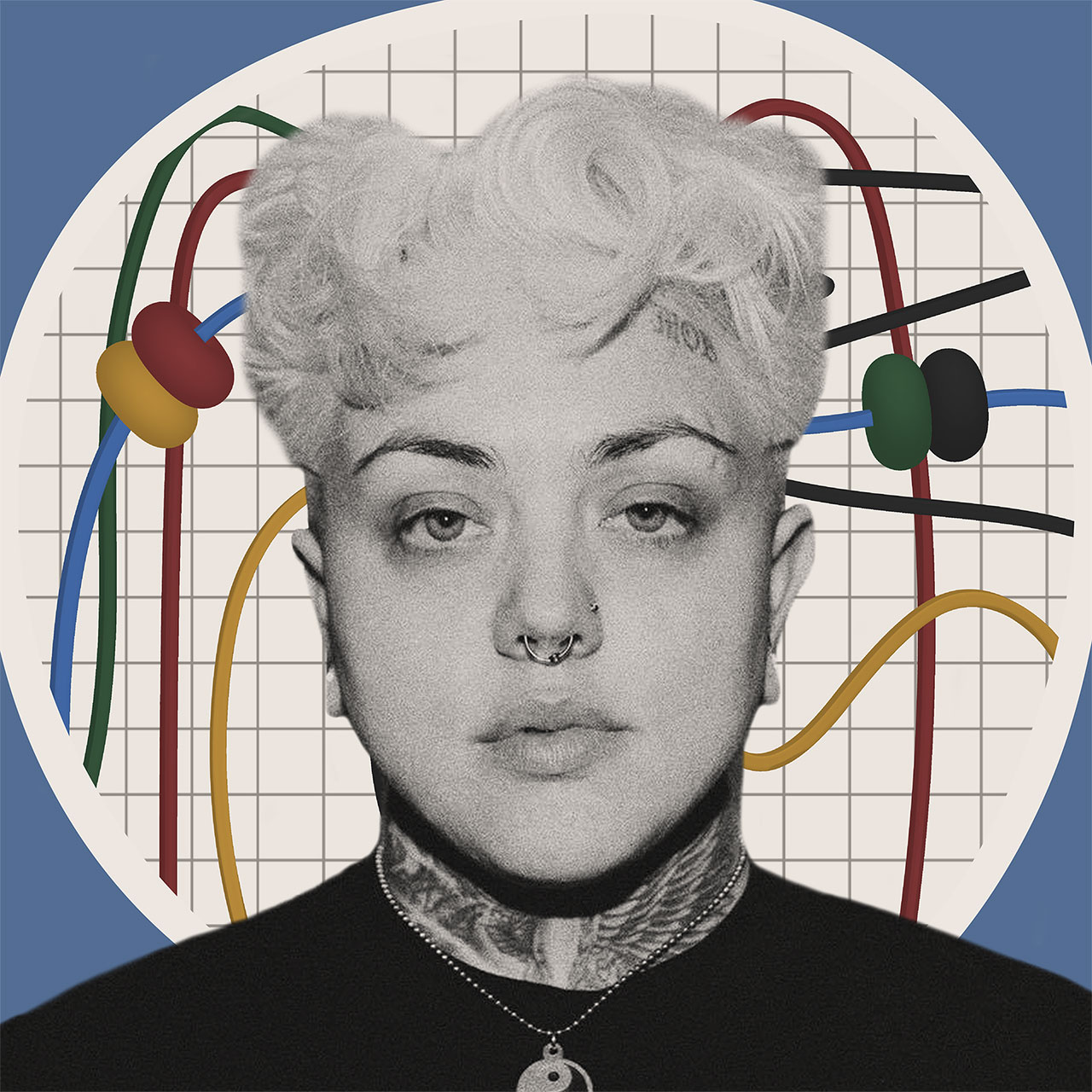 Florencia Carcagno, aka Tragik, is a multidisciplinary creative director and executive producer who has put an emphasis on mentoring young QTBIPOC creators. Her more than decade-long career has emphasized a deep, empathic ability to tell authentic stories and build a devoted community. She has worked with major labels and artists from all over the world and companies such as Universal Music Group, Sony, Interscope, GRINDR, FOLX Health and Animal Planet.

Tragik was born in Buenos Aires and raised in the Bay Area. At 17, she was put through a program with other young, poor, queer women of color impacted by the criminal justice system, where she was exposed to her first dark room and given the opportunity to learn photography and storytelling as a means of expression. Through this experience, she learned how photography helped her peers feel empowered, beautiful, safe, confident, and powerful.

Two decades later, this continues to translate into her work, emphasizing QTBIPOC representation across the board. Tragik joined FOLX Health as creative director in July 2020 working with their CCO to lead creative and build the brand in their go-to-market strategy.

We spoke with Tragik for our series Checkup, where we chat with leaders in the healthcare marketing space.

I was born in Buenos Aires, Argentina, raised primarily in the Bay Area, spent time in Texas, Chicago, Atlanta and New Orleans, and have been in Los Angeles for the past decade, now raising a cali baby with my wife and our super needy gato.

The earliest memory I have, being exposed to healthcare generally, was as a child, when my mom was doing HIV services and benefits counseling for people living and dying of AIDS at a non-profit in San Francisco (AIDS Benefit Counselors, now PRC). The '80s and early '90s AIDS epidemic deeply affected queer and trans communities and beyond, in particular BIPOC folks, who are still heavily impacted by HIV 30 years later. Black and Latino queer women, like my mother, fought hard to take care of their communities as government abandoned them. I was able to witness folks taking care of each other, by any means necessary, and communicating their needs through punk advertising and visual foundations. This became the root of how I approached storytelling and brand building, emphasizing a deep, empathic ability to tell authentic stories through a guerrilla mindset and an intersectional lens.

I am heavily inspired by Gran Fury's (an AIDS activist artist collective from NYC) early work and the boldness and simplicity of '80s and '90s advertising. One of Gran Fury's most visually striking and effective campaigns, "Kissing DOESN'T Kill" strongly influenced healthcare and marketing broadly as we know it today. I knew early on that I wanted my work to be rooted in activism, connection and personhood.

I've worked in the music industry, film/TV, tech, and eventually landed in the healthcare space working as the senior creative director at FOLX Health. I believe all marketing touches on some level of health in one way or another—mental, spiritual, physical, emotional—so my ability to storytell and speak to different audiences remained unwavered through industry shifts.

Navigating our complex and inequitable healthcare system can feel exploitative, biased and isolating, and it perpetuates the feeling that we are not in control. Similar to crypto/Bitcoin and public blockchains, removing intermediaries, we are now at the forefront of a major shift. D2C healthcare companies are removing barriers and creating more access towards bodily autonomy with exemplary and affirming care, for those that can afford it.

However, there is still so much work to do to transform a system where only a small percentage of folks amassing extreme wealth benefit from it. Healthcare is a human right. That should be known to everyone, but not in this country. The Affordable Care Act (ACA), also known as Obamacare, passed 12 years ago, and there are still 12 states, primarily in the South, that have never elected to expand healthcare coverage to poor people. California just implemented full scope Medicaid to adults 50 and older regardless of immigration status, which immigrant rights organizers fought for decades.

What may not be as known is that in the U.S., when compared with whites, Black, indigenous and Latino/x are less likely to receive preventive health services and often receive lower-quality care. They also have worse health outcomes for certain conditions. The U.S. has the highest maternal mortality rate among developed countries. THE HIGHEST. Black women (and birthers) are three times more likely to die from a pregnancy-related cause than white women (or birthers). We need to continue fighting to protect and care for birthers, demanding change within antiquated systems that prioritize driving profit over people. Must-watch documentary: AFTERSHOCK.

We are simultaneously dealing with an infertility crisis around the world like never before, affecting 15 percent of our population. There is inadequate care for queer and trans people, specifically around fertility and family building—check how standard insurance providers define "infertility" within hetero/cis-normative language—as well as access to life-saving care. There is much work to do to help care for each other, but we must also hold systems responsible to demand equitable change.

I'm extremely proud of the past two Pride campaigns I worked on with FOLX and our internal marketing team. This is a small but mighty team, and we were able to create award-winning work that exemplified how to approach storytelling and authenticity through dynamic and effective methods.

This year's campaign, "FUTUREXLEGACY," featured Dominique Jackson (Pose/FX), Kade Gottlieb (RuPaul's Drag Race), Schuyler Bailar (trans athlete), my wife Jaewynn (artist), our daughter, and an incredible cast of over 20 queer, trans, and gender-nonconforming people spanning all ages. The film's main narrative focuses on connecting our present to the past and envisions a brighter future for the entire community. We also worked with five trans queens who were contestants on RuPaul's Drag Race, on their most openly trans/non-binary season, to help us amplify our HRT Care Fund and expand access to care at FOLX.

For Pride 2021, FOLX encouraged LGBTQ+  people to literally take up space. Our campaign, "Taking Up Space," highlighted queer and trans people out in the wild: published in print, on billboards, taking over a New York subway station, in the streets through wheat pasting, in press and the digital landscape. This campaign told the narrative of the imperative nature of trans and queer people claiming space. With this campaign, we aimed to shift the Pride narrative back to its origins: rebellion, revolt and radical reclamation of space. We inspired and ignited the same sense of urgency, liberation and freedom-fighting as our Transcestors and the bespoke legacy of giants that came before us. We showcased the beauty and boldness of our resilient and tenacious community.

Someone else's project within healthcare that you were impressed by recently.

I was recently impressed by Mother's Against Greg Abbott and their latest abortion ad, "Whose Choice." Not only did they make an incredibly impactful and emotionally driven ad within 90 seconds but they somehow managed to make me cry and laugh at the same time. Sadly, cis men making decisions about women and trans bodies is on brand for this country.

I am also a big fan of BILLIE and love what they did for International Women's Day in 2021 with their "Think of a Woman" campaign. Big fan of their message and visuals. Flawlessly executed.

Whoever your audience is, they should always have a voice in the room helping make decisions around messaging, intent, creative and execution. Speaking authentically and establishing thought leadership is vital for brand trust and community building. There needs to be more diversity and representation in leadership positions. Consumerism is shifting, and any company looking to build long-term relationships must also understand this shift within Gen Z and Gen Alpha audiences. They are growing up with a heightened awareness of the world and no longer consuming the same way.

I had a hard time with this question, mainly because traditional healthcare in this country is dismal and inequitable. However, with the emergence of new technologies and practices, people have access to more bodily autonomy and self agency than ever before, for those who can afford it. I'm excited for us to continue pushing these boundaries and disrupt archaic systems that do not serve us and expand access for all.

Coming from a non-traditional background, I am a big advocate for expanding talent search beyond conventional methods and prioritizing recruiting efforts towards QTBIPOC. Incorporating mentorships and investing in career growth within your internal teams can also help with retention and mutual partnerships. Time is one of the most valuable gifts you can give. Retaining creative people and their time is just as important as attracting new talent.

What you would be doing if you weren't in healthcare marketing.

My work revolves around personhood, storytelling and community building, which is something I will take with me no matter where I go. In another life, I would own and run a successful thrift store focused on upcycling.