'Trust The Earth' says the campaign

Charlotte's Web, a provider of hemp-based extract CBD products, collaborated with Shepard Fairey's Studio Number One on a huge mural in Brooklyn that went live today.

Located at the corner of North 11th Street and Wythe Avenue in Williamsburg, the image of a hand holding a cannabis leaf beneath the headline "Trust the Earth" measures 51 feet high by 21 feet wide. 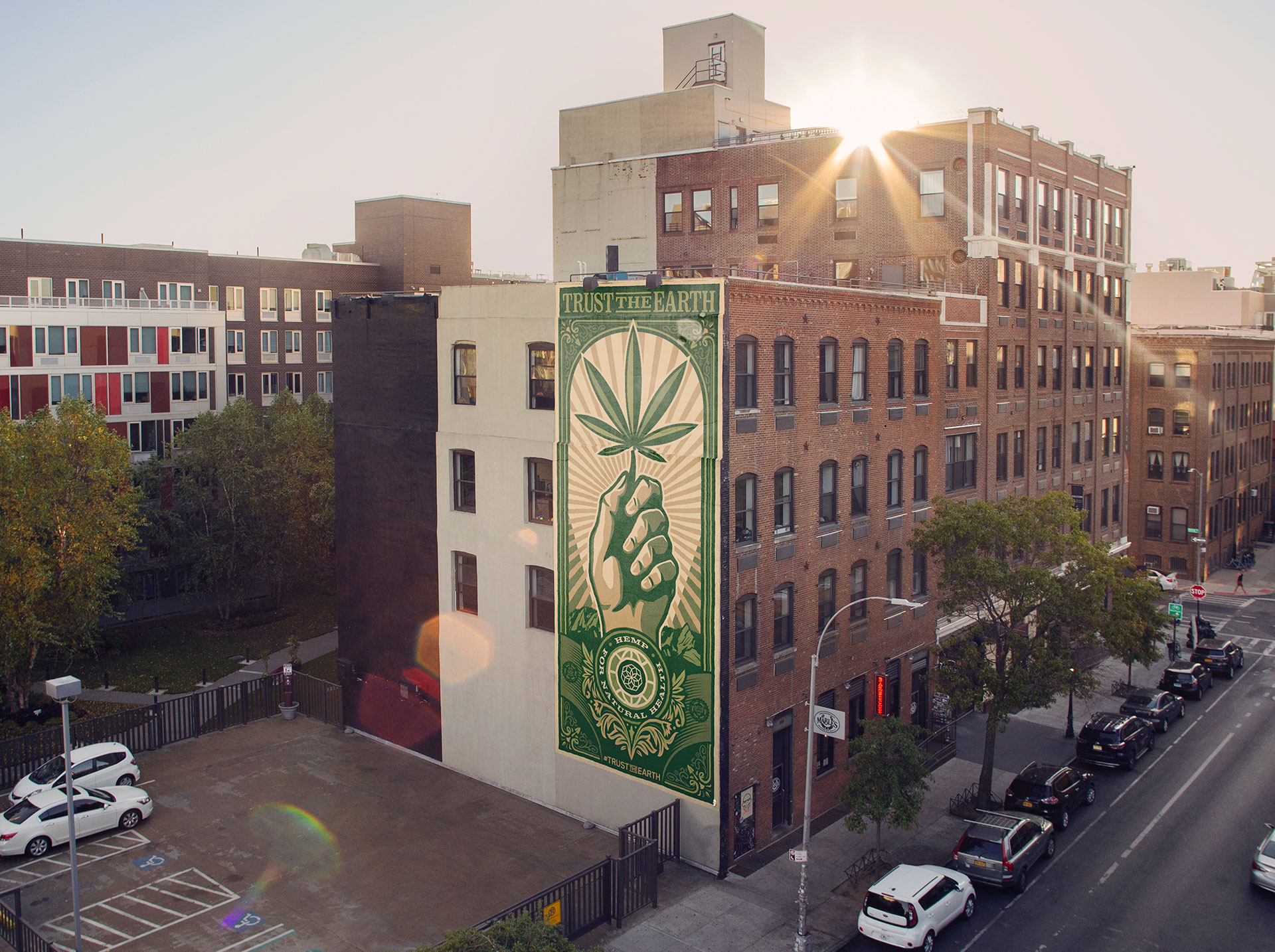 Rendered in Fairey's signature style, typified by the famous "Hope" poster from 2008 featuring Barack Obama, the outsized Charlotte's Web image will also be projected onto various spaces in Washington D.C., Chicago and Los Angeles. (The team chose Williamsburg for the physical artwork because of its reputation as a forward-thinking community.)

Experiential design agency Fake Love produced the campaign, which urges folks to educate themselves about the health and wellness uses of CBD and other natural healthcare options.

The name Charlotte's Web refers to a variety of cannabis developed in 2011 by the Colorado-based Stanley brothers Joel, Jesse, Jon, Jordan, Jared, Josh and Austin. The product and company were later named for Charlotte Figi, a young girl who suffers from debilitating seizures, and whose symptoms were relieved by doses of the brothers' CBD-rich strain.

"Health and wellness is a collective experience, so anyone who could better their everyday life through cannabis might want to consider the possibility of trying hemp," Jesse Stanley tells Muse. "Hemp-based CBD is gaining major popularity in the mainstream, and while much of that is people sharing their positive experiences, the conversation is also getting cluttered. That is why education right now is key."

With its artsy leanings, "Trust the Earth" echoes pot's past as a recreational favorite at outdoor musical festivals, crafts exhibitions and hippie fairs, while also pointing the way to the future with its progressive message. The work taps into a major OOH trend, with brands of all sorts—including Audi, Bombay Sapphire and Epson—launching art installations of late.

"We'd like the artwork to remind people that we aren't disconnected from nature," Jesse Stanley says. "The same compounds that exist in hemp, exist in our own bodies, and many of the answers we seek are from the earth. If we are going to put trust in our own health, we should consider trusting nature."