We Are Made of Stardust, and So Is This Museum's New Ad Campaign

For Cree artist Kent Monkman's new exhibition, Being Legendary, the Royal Ontario Museum has released "We Are Made of Stardust."

Toronto-based agency Broken Heart Love Affair created the campaign, filmed by Haudenosaunee director Shaunoh in collaboration with two of the agency's chief creative officers, Craig McIntosh and Jaimes Zentil. It opens with a hot pink comet shooting across the sky. An Indigenous girl follows it to its landing point, gathers a few stones, and grinds them into a beautiful pigment. As the background music swells, she carefully pins up her work: A series of black posters, upon which is scripted "We are made of stardust" in a sans-serif font.

"The childlike awe is what we want people to take away from both the campaign and the exhibition," McIntosh says. "We also wanted the video to be distinct from Kent Monkman's new body of work, while at the same time echoing some of its themes."

To be honest, the video feels like a lot of storytelling and symbolism for a somewhat anticlimactic ending. But if its creative conclusion underpromises, Monkman's art—some of which appears in quick closing shots—overdelivers: It's lush, rich, strange, and narrated by his fluid alter-ego, Miss Chief Eagle Testickle.

The campaign posters and mural are indeed made of meteorite dust, crushed by the museum's rock crusher, with the paint produced by Manitoulin Island paintmaker Anong Migwans Beam. The work is inspired by a 2017 study that found human bodies contain 97 percent of the elements found in the outer galaxy.

Again, lots of cool storytelling here. I just wish they'd done more with it than write a declaration in mod typography.

Being Legendary is composed of 35 paintings, as well as sculptures and etchings. It recounts the story of Turtle Island from the beginning of time to the present, from the eyes of Miss Chief Eagle Testickle. Among the pieces are fossils, a meteorite, and intricately beaded moccasins, chosen from among the museum's pieces by Monkman. This invites questions about how museum collections are curated and presented in modernity. 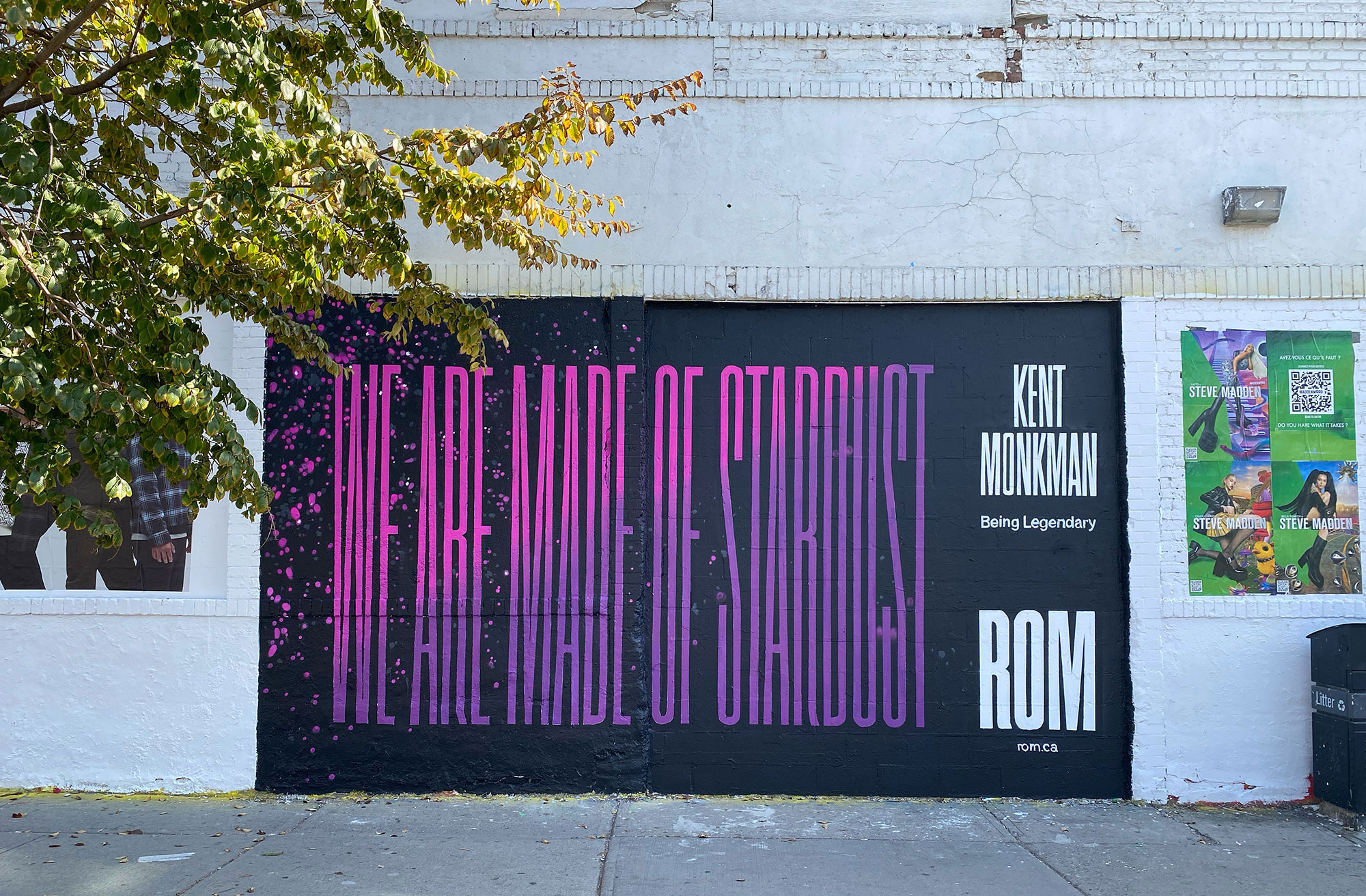 "We're announcing the arrival of one of the most anticipated exhibitions of the year," Zentil says. "Kent Monkman's paintings are massive in scale, hyper-realized and detailed. Like a comet, his artwork makes a huge impact, so we leaned into that concept for the campaign."

The exhibit runs through March 19. When last we visited with the Royal Ontario Museum, it gave us the gift of "Immortal," a six-minute unfolding of the human epic, seemingly shot underwater. We still cry when we watch it. It was also created by Broken Heart Love Affair.