It's not linear, it's everything

Eckhart Tolle once said, "You are the universe expressing itself as a human for a little while." It's a deceptively simple quote that reveals itself the longer you think about it: Here I am, the universe as Angela, writing this piece. There you are, the universe, reading it … maybe with other tabs open, other things going on in your immediate environment.

What a chill that sends—this feeling that, from a macro scale, we ultimately experience everything as each other, and that's only accounting for human experiences.

That's essentially what's at heart of the Royal Ontario Museum's latest piece, "Immortal," by agency Broken Heart Love Affair. The six-minute video takes us on a spiraling journey through the human story—not really as a series of events, but as a series of moments, acts, and sensations out of time.

"I will paddle the rivers of Turtle Island, be born into a rich family, die at 19 a pharaoh in Egypt. I will be beheaded. I will be a girl. I will be shamed. I will live through a pandemic. Or die in one."

"Immortal" was directed by Scouts Honour's Mark Zibert. The script was written by Denise Rossetto and Carlos Moreno, Broken Heart's co-founders and chief creative officers. The whole ad takes place in the womb of Earth, and is told from the perspective of an unborn child who contains the story of everyone who ever lived. Zibert and his team used lens, lighting and atmospheric effects to lend the impression that the piece was shot entirely underwater.

So many moments this meditation pricked our eyes. The juxtapositions of time and position are not only narrative; they appear, visceral and slow-moving, in water. A modern protestor leaps over a Roman soldier, both too preoccupied by the dance of their own timeline to see one another. The Berlin Wall resurrects to be crushed again, moments before a Black ballerina appears, staring out at nothing in particular. Great triumphs sit aside great follies: Write the Song of Solomon, then be the one who burns it.

"We always knew we wanted people not just to see objects," says Rossetto. "If you've been to the ROM, you've seen objects. We needed people to see that these aren't objects, they are portals to humanity."

The goal of "Immortal" is to cultivate that perspective of objects. "Every object in ROM is a portal to stories with the relevance that can speak to something we are facing today; igniting important cultural conversations. 'Immortal,' as a platform, speaks to the legacy of these objects and the immortality of these stories," says Lori Davison, the museum's chief marketing and communications officer.

The work concludes, "I will give birth and I will die. But I will live on in what I leave behind."

"I put on my late father's watch the day of the shoot," Rosetto says. "And I thought, 'He's living on with me today in the watch he left behind.' I felt this emotional feeling that I'm wearing what my dad left behind for me. I kind of like looking at objects everywhere as the people behind them and the love they put into these things."

The campaign will run through the summer in cinemas, outdoors and on digital. The Royal Ontario Museum will keep the full version on its YouTube.

See a BTS film below. 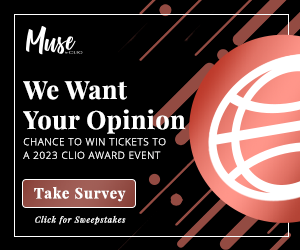