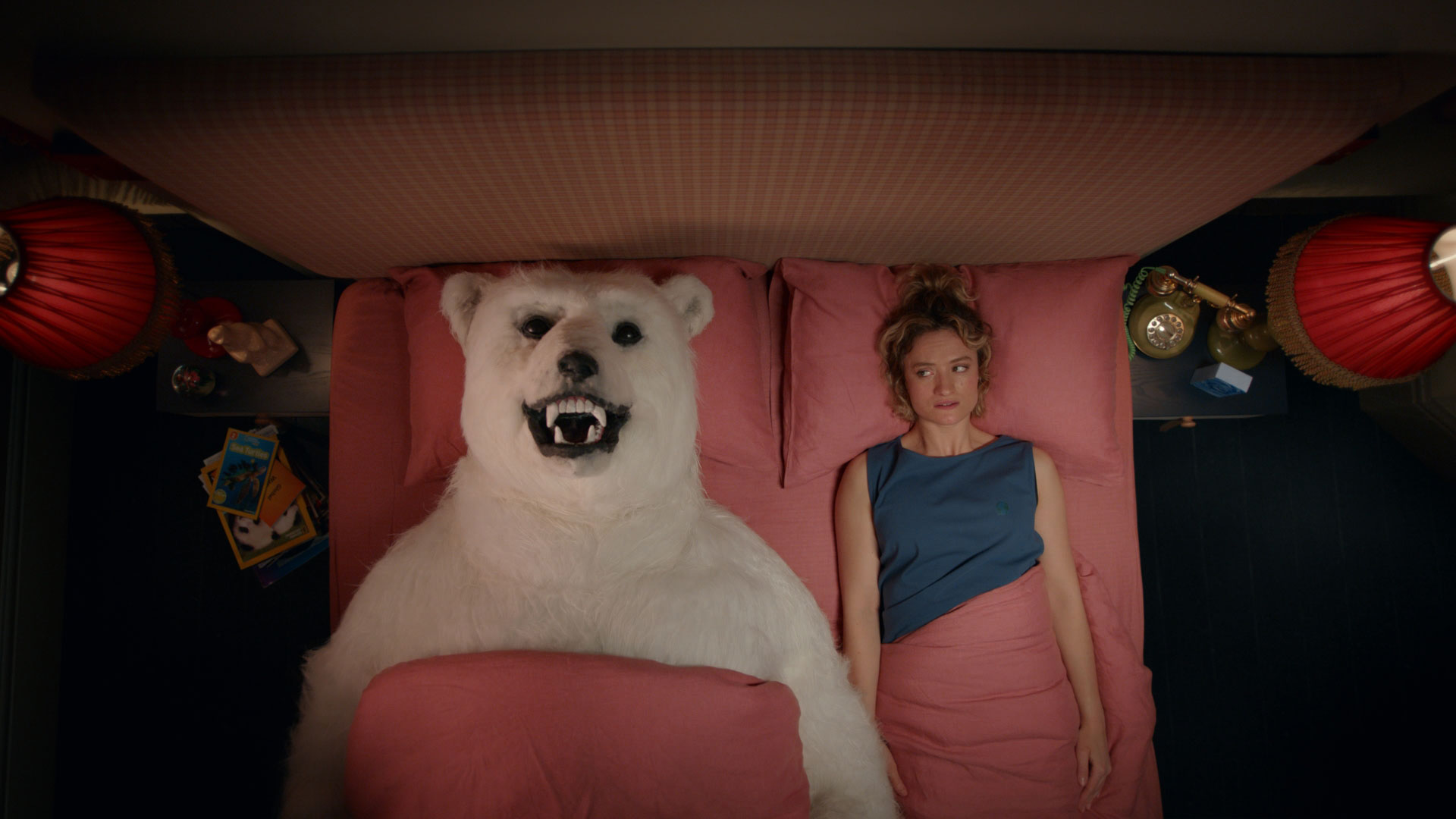 This is pretty weird … at first glance, anyway.

BBH's first-ever ad for the brand Wild Cosmetics—best known for all those Instagram ads about its natural deodorant with the reusable container—is titled "Dirty Talk." It features a polar bear in a relationship with a woman, who's turned on by the dirtiest topic of all: environmental destruction.

That kinda vibes like a metaphor for all of capitalism, but we won't write that dissertation today, promise:

"My profile did say that bit about wanting to be with someone who lives on the edge … of extinction," she says.

This is awkward. But when Thorvald slides into bed beside her—probably contemplating his life choices—she tries bringing him into the action, confessing her climate sins with increasing excitement. How she leaves the tap running while brushing her teeth. Doesn't always separate the recycling. Uses a car instead of public transport.

"So environmentally irresponsible," he growls.

"I'm your little out-of-season strawberry," she parries back.

Eventually she gets so hot that she rolls out of bed, brandishes an aerosol deodorant, and cries, "Spray me!"

This is the line too far. Thorvald was maybe into the dirty environmental talk roleplay, but her deodorant sends him into pitch-mode in front of an old-school TV, modeling the various natural benefits of Wild deodorant for his wayward farmed cod of a girlfriend.

We're not super impressed by the grace of this transition, but it had to be done; how else were they gonna get where this needed to go?

"Dirty Talk" looks bonkers on its face, but stories of relationships between bears and women are older than written history, making this a modern take on a sizable lineage. (It might also change how you see Canal+'s own famous bear.)

"The Woman Who Married a Bear" is a native Tsimshian story in the Americas, but there is also a variant among the indigenous people of Siberia. Europe is replete with bear stories; King Arthur, in some legends, is said to have been a bear-king before becoming a man.

In The Man Who Spoke Snakish, Andrus Kivirähk's tale of a hunter-gatherer boy in medieval Estonia, the protagonist's sister is seduced by a bear, and he irritably laments bears' tendency to steal local women. And of course there's Marian Engel's controversial novella Bear. Published in the 1970s, it follows a Canadian archivist who goes to work in northern Ontario, where she tries to initiate a sexual relatonship with a tamed bear.

An image search for "woman with bear" brings up lots of fairy tale-inspired shots of women cuddling, often in amorous ways, with bears. These include photos of Veronica Dichka, a Russian woman who rescued a bear from a zoo and has since adopted him.

There are a lot of reasons for this whole woman-bear thing. Engel's book is often described as a parable for the effects of colonization—how, feeling isolated even from ourselves, we come to fetishize nature and try to possess it in all the ways we can, even when consent is compromised. Older stories, including myths, often convey something about the need for human society to enter into pacts of equilibrium and respect with the wider environment.

Notions of men being anxious about bears stealing women is often read as a reflection of how men have distanced themselves from wildness and are thus contemptuous of it, even as they suspect women can still connect to what, deep down, feels like a loss. (You can guess how, over thousands of years, this becomes propaganda about how the feminine principle is not entirely civilized, or requires top-down control by patriarchal authority.)

In BBH's work, though, the "wildness" of the woman that alienates her partner is actually an inversion: She's wild in the sense that she's not politically correct, actively turned on by the idea of environmental annihilation. Even the thought that her partner is an endangered species gets her off. This storytelling flirts with our tendency to conflate ideas of wildness with being savage, a hangover from how Enlightenment thinkers labeled cultures that didn't align with European ideas about property, religion or civilization (and ultimately justified their genocides).

This actually didn't have anything to do with the given culture's maturity or social development. Actually, a lot of Native Americans in regular interaction with Europeans were surprised by the latter's poor skills in oratory and debate, and their willingness to justify abject poverty, hunger and capital punishment in their own homelands, all the while claiming this was the most civilized way to live. David Graeber's The Dawn of Everything is replete with anecdotes about this!

Anyway, the question Wild seems to be asking is who, in this relationship, is actually exhibiting savage behavior? The polar bear wears fresh cotton and sea-salt scented Wild deodorant; it's hard to imagine a scent less evocative of clean white sheets.

"So there's really no single-use plastic?" Sarah asks, obliging Thorvald by sniffing him.

"Oh, Sarah," he replies. "The only thing that's single around here … is you."

"Dirty Talk" is designed to talk to eco-conscious people who are uneasy about whether natural deodorant will actually leave them feeling clean and fresh.

"When Wild's competitors are opting for eco-worthiness, we decided to disrupt," says Joy Molan, senior strategist at BBH. "Our audience's lives are a lot right now—from climate change to relationship red flags—so we channeled all this anxiety into a wonderfully chaotic spot that pokes fun at our imperfections and celebrates a simple way to do our bit for the planet."

The campaign went live May 31 on TV, via YouTube paid ads and other social channels. It will run for 12 months.