Who's Been Eating the Sir Kensington's Billboard in Midtown?

Shifting headlines and an evolving mystery 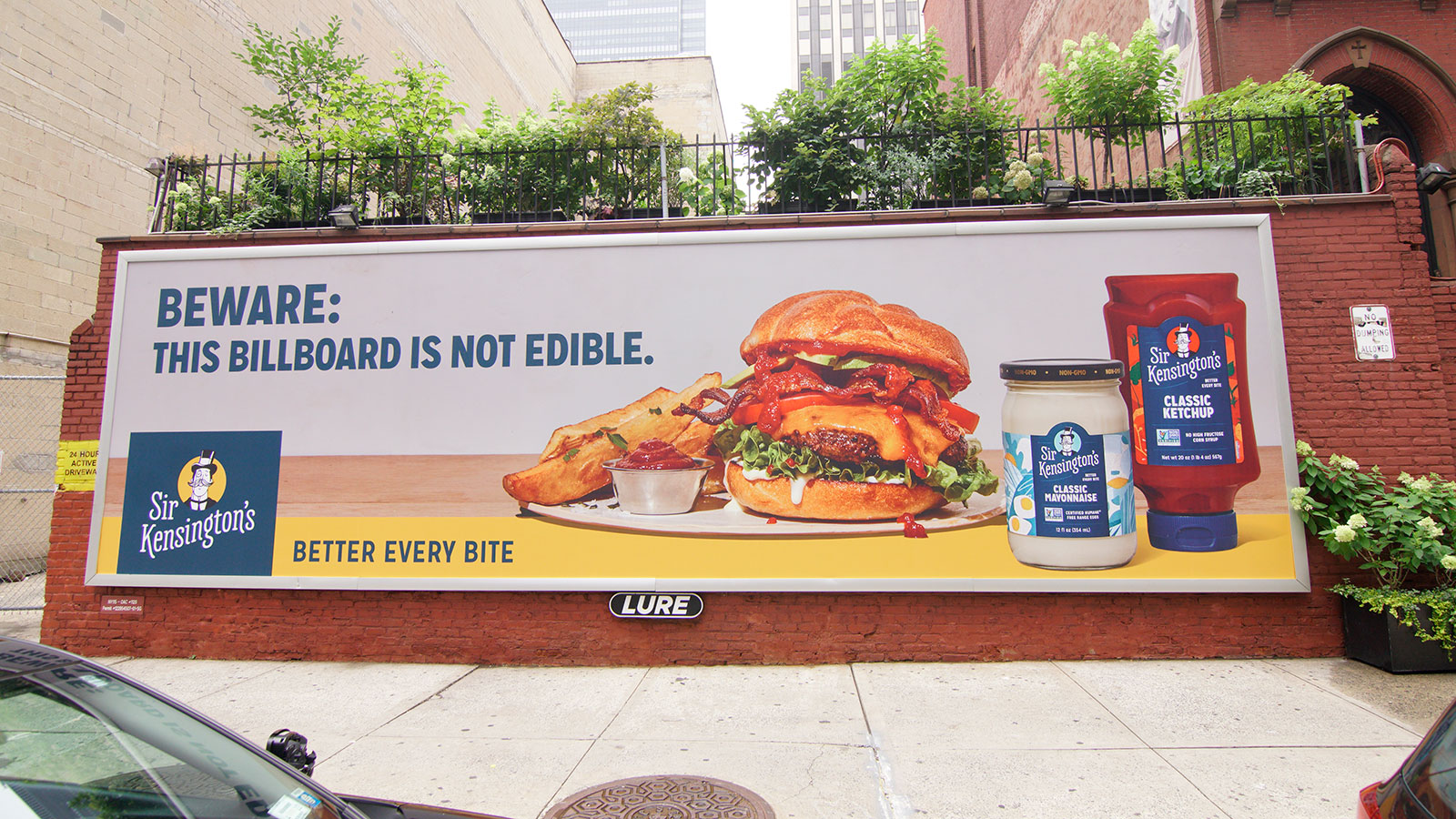 Now and then we see billboards that look tasty enough to eat. But now, Sir Kensington's, the condiments brand, takes it one step further—with an amusing OOH hack in midtown Manhattan that featured a series of billboards over a three-week stretch warning passersby not to munch on the delicious-looking advertising.

The prank, devised by agency Interesting Development, kicked off July 12 with the billboard above—on West 30th Street near 7th Avenue.

New Yorkers, as is their wont, apparently completely ignored the warning, because just two days later the board had bites visibly missing—as passersby couldn't resist the images of Sir Kensington's ketchup and mayonnaise (as well as, oddly, the upper left corner of the board). 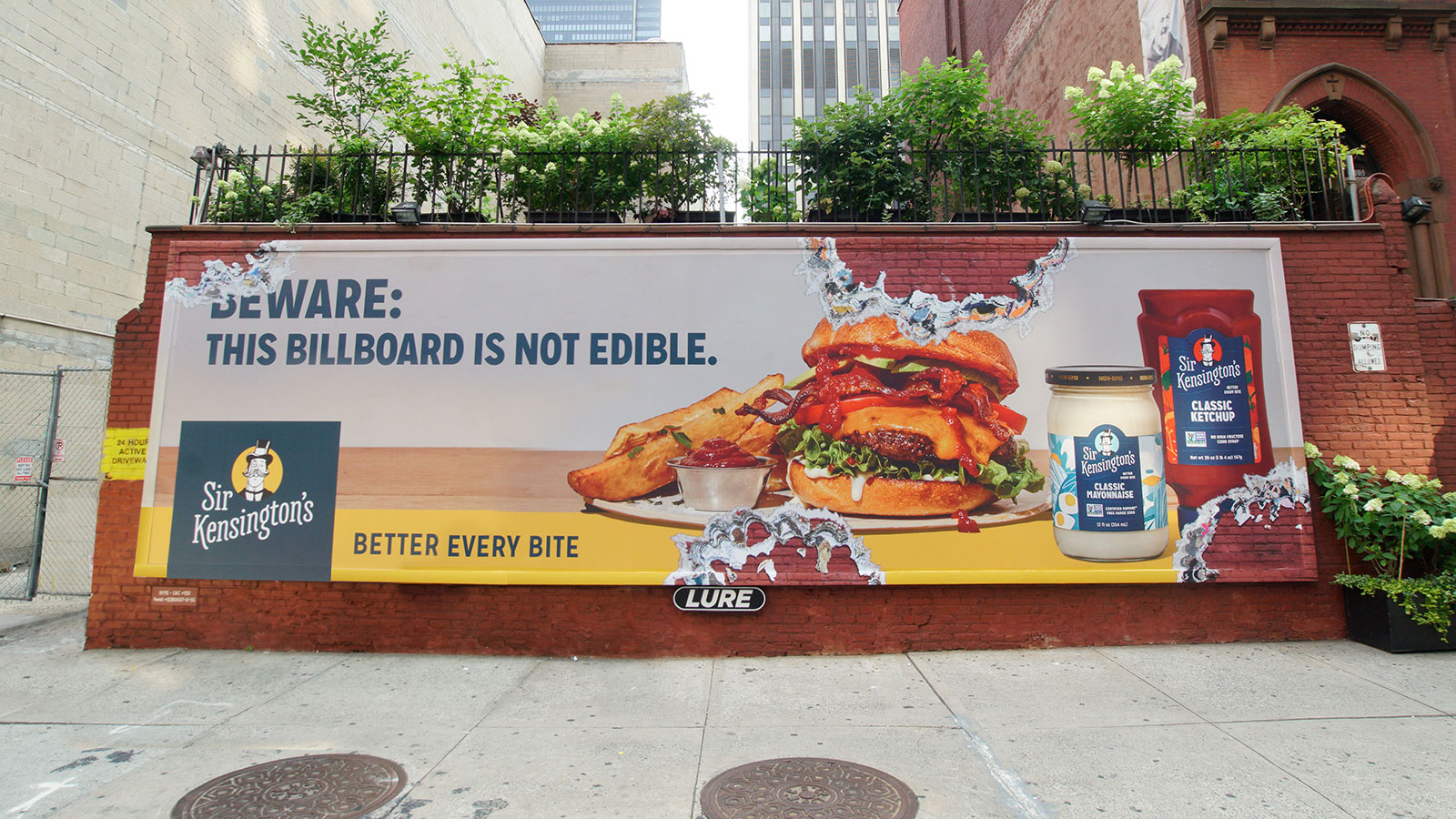 Two days after that, the bites marks had been repaired. And a new warning was issued. 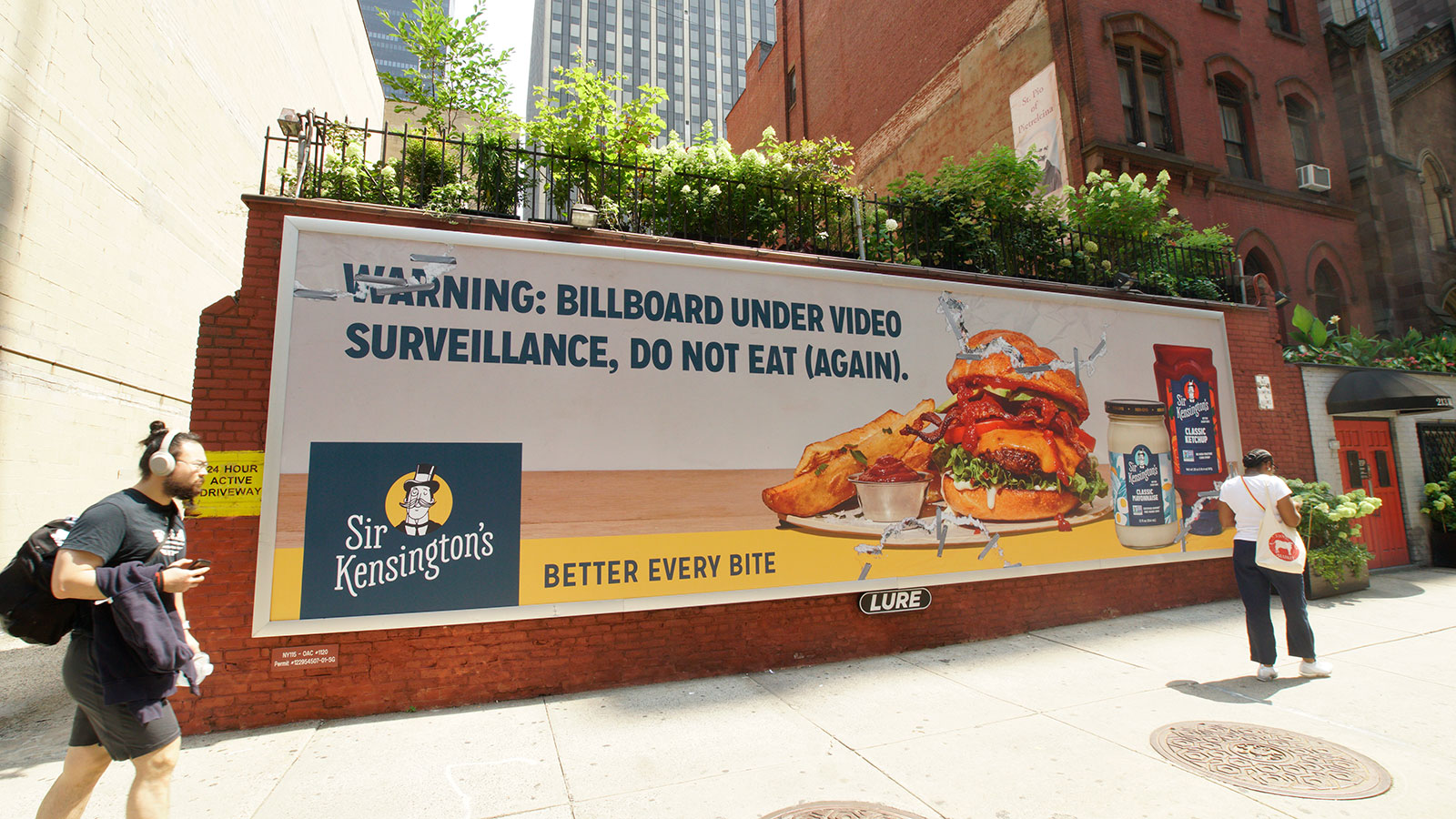 But not even the threat of surveillance could protect the ad from the famished. 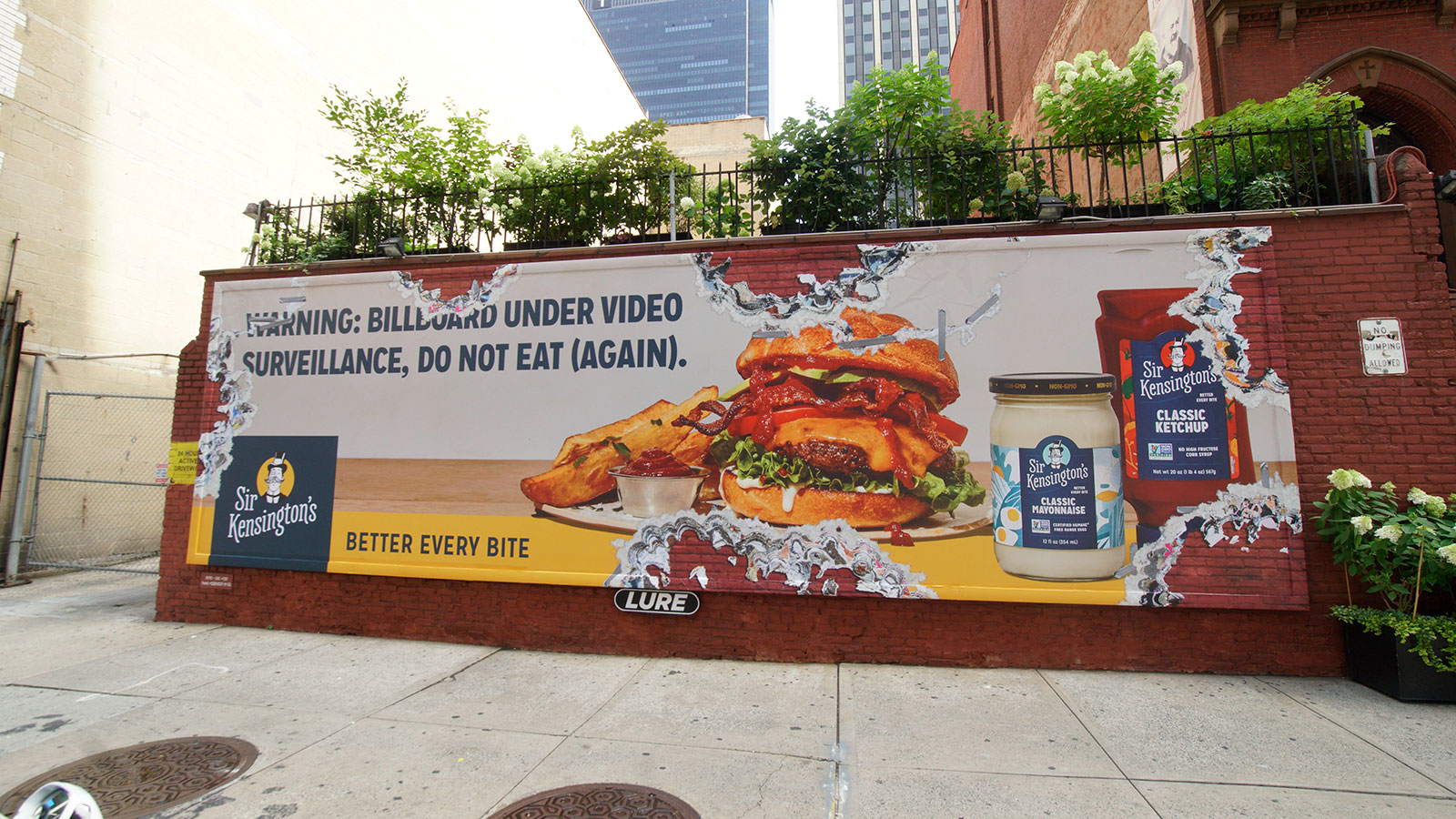 Realizing it was "time to get serious," Sir Kensington's changed the billboard copy again, and even took the remarkable step of getting Steve Schirripa, best known as Bobby Baccalieri from The Sopranos, to guard the board in person. This generated a whole slew of media coverage on its own.

But it was a lost cause. Eventually, in early August, Sir Kensington's put up a much less appetizing board informing the neighborhood that the original billboard had been moved to Geneva Freeport—the famous warehouse complex in Geneva, Switzerland, that stores art and other valuables. 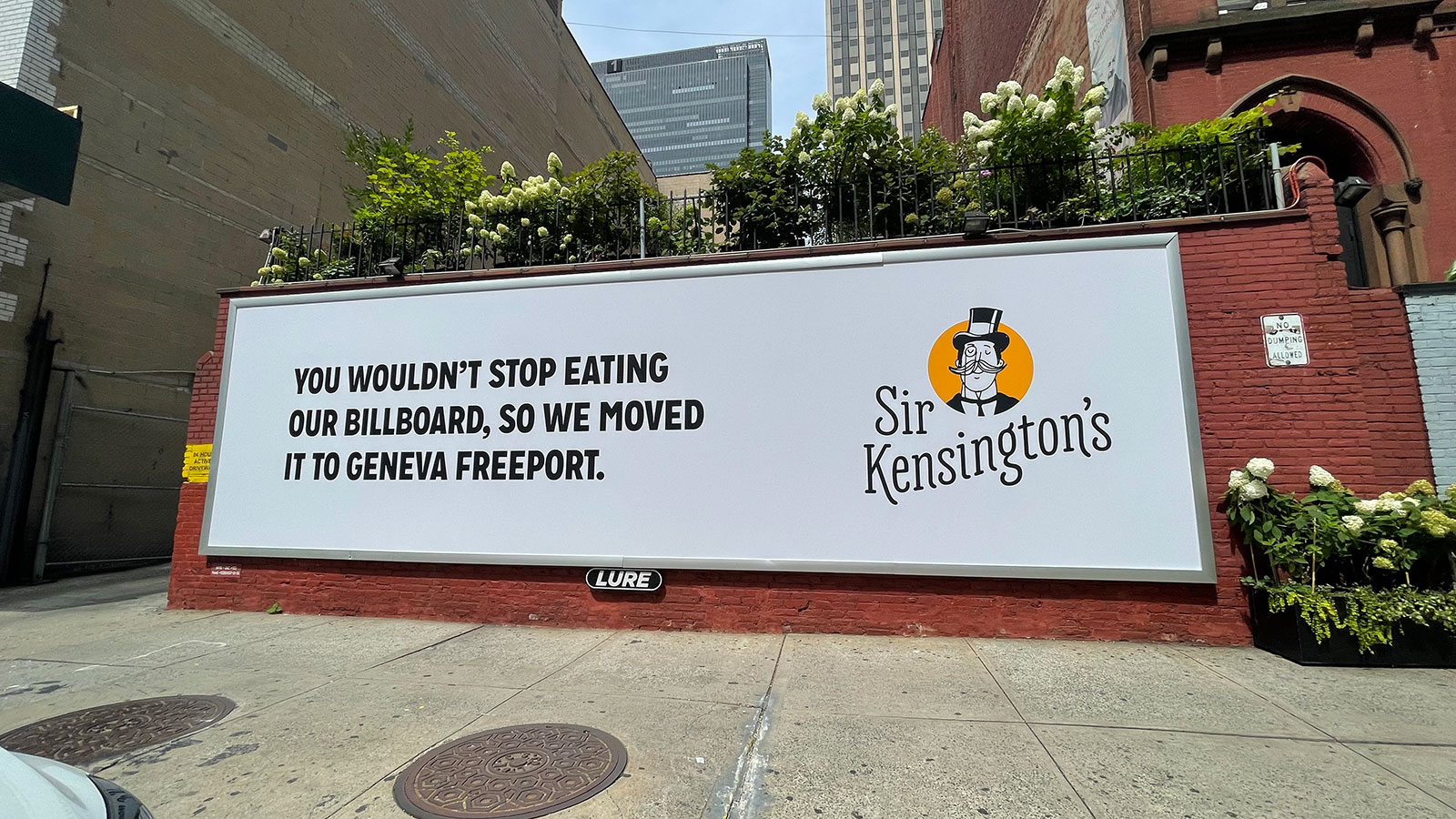 Paul Caiozzo, creative chief of Interesting Development, admits the amusing series of boards was a tricky thing to pull off logistically. "There was a lot of timing to coordinate, holidays to work around, tons of billboard swaps, celebrity schedules and even shipping to Switzerland," he says.

Schirripa was a useful addition to the campaign. "New Yorkers knew not to mess with Steve at the board, especially someone like him who has portrayed a tough character involved with the mafia on-screen," Caiozzo says. "He chased people away using his raw Italian energy."

He adds: "The board not only generated interest with passersby this summer, but Steve also talked about his protection of the board to local and national news publications. Plus, the stunt received positive engagement and commentary on Steve and Sir Kensington's social media channels."

In the end, it was a pleasantly goofy campaign that harkened back to the Unilever brand's indie roots.

"Sir Kensington's is a higher-quality, premium product but remains an extremely playful and fun brand," says Caiozzo. "From stunts like the museum of fries [Fries of New York exhibit], backing a documentary film about the global history of French fries, and their cartoon monocled logo, we wanted to keep that unconventional, inventive spirit going."