In this unconventional PSA, we watch three different customers buy the same brand of candy at a convenience store.

For the first two shoppers, a white woman and a white man, the transaction goes down exactly as you'd expect. Each pays a dollar and receives a chocolate bar.

When a black man follows them at the counter, however, something unexpected happens. As the clerk hands him the candy, in the blink of an eye it undergoes a strange and unsettling transformation.

Either way, its presence in the man's hand, as he walks home a short time later, could cost him his life, as you'll see in the :60 below from Goodby Silverstein & Partners and the Courageous Conversation Global Foundation:

Watching the candy bar inexplicably morph into a gun is disorienting. What could it mean? Later, when the police stop the man on the street, and he raises his hands, still holding the candy bar, the message seems clear.

In case it's not, we're reminded by onscreen text: "A black person is three time more likely to be killed by police. Too often, when armed with nothing more than a candy bar. Help everyone get home safe."

Rakish director Kevin Foley keeps us off-balance and engaged, building tension and unease throughout (even if the opening shot of the Stars & Stripes, while pointed, is perhaps a bit on the nose).

In the end, we're asked to sign a petition at NotAGun.org, which calls for eradicating unconscious racial bias and de-escalating potentially deadly encounters through "Survival Options for Police and People," a training course CCGF tailors to local law enforcement.

"We either need the police and the community to solve it together, or we need policy change," says Glenn Singleton, the organization's founder. "One way or the other, something has to happen."

The cases of Trayvon Martin, Eric Garner and Stephon Clark served, to some extent, as campaign inspirations. None of those black men were armed when they met their violent ends. In 2012, a neighborhood watch commander fatally shot Martin; among his possessions that night was a bag of Skittles he'd just bought at a 7-Eleven. Two years later, police in Staten Island arrested Eric Garner for selling loose cigarettes. Garner died when officers placed him in a chokehold.

Clark's death most closely matches the film's scenario. He died in 2018, shot by police in Sacramento, Calif., who erroneously claimed he was holding a gun, when in fact it was an iPhone.

"As a black man, you often have to think twice about ordinary actions," GS&P associate creative director Anthony O'Neill tells Muse. "That's what played in my head one night when I came home. I emptied my hoodie and jacket pockets and neatly organized all the things I had on the table—Mentos, keys, metal wallet—and said to myself, 'I'm lucky to have not gotten stopped by the police.'"

He adds: "It's a crazy question to ask yourself, but it's not that crazy considering you hear on the news that another black man was killed while unarmed. That's just how I thought about it in that moment. So when I got to the office the next morning, I shared the thought with my creative partner, Rony Castor, and 'Not a Gun' was born."

"Not a Gun" marks GS&P's latest notable social-issues endeavor. Other efforts include "Lessons in Herstory" (addressing the fact that most history books focus on men); "Unacceptable Acceptance Letters" (raising awareness of campus rape); and "I Am a Witness" (an emoji-based attack on bullying).

GS&P consulted with retired Atlanta police commander and author Khalfani Yabuku to craft the "Not a Gun" campaign. Yabuku says better training can save lives. "If officers approach the situation with a greater level of awareness, their reaction is going to take a different course and they won't perceive everything as a threat," he says.

"Not a Gun" breaks online today, with additional broadcast, print and billboards in Austin, Texas, where police officials have grappled with accusations of racism and discrimination. In coming months, the initiative will expand to cities where excessive force has been an issue. You can see more campaign elements below: 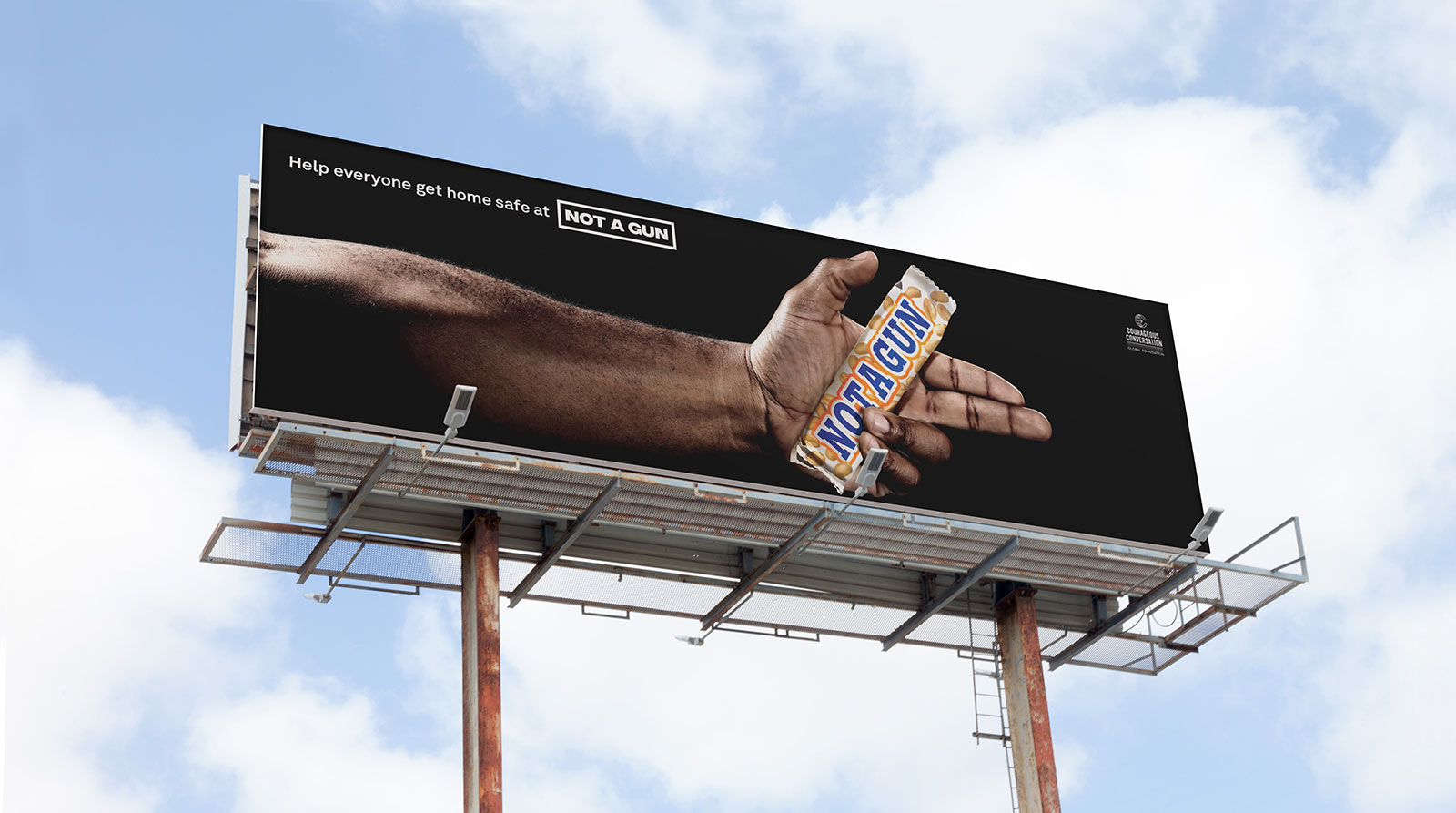