Glenmorangie's Saturated Dreamscape Is Just the Vibe We Need This December

That tag's pretty twee, but the work is bright, easygoing and frankly just pretty to look at—a pupils-dilating antidote for the uncertainty of holidays in pandemia. Its lovingly constructed scenes are a shorthand for worlds we can get lost in, reminiscent of the moment Munchkinland explodes into color for Dorothy in The Wizard of Oz. Who didn't want to join her there?

Bubbles rain down in a lush bathroom, where a woman reads a book beside her dog. A couple leans in to kiss, a forgotten box of popcorn tumbling from the man's hands. Legs swing in a train car, where people with monogrammed luggage gaze out at cherry blossoms under a red sky.

The work owes Wes Anderson a big debt—the monogrammed luggage, choice of book, and coolly posed quirky figures all whisper his name. But it also has an identity all its own, an infectious joy in that whimsy.

"We set out to showcase everyday experiences—on the balcony or a train journey—all made more wonderful, to reflect Glenmorangie's perspective," says Alexander Kalchev, chief creative officer of DDB Paris. "Inspired by the brand's signature orange color, we decided to use color as a metaphor to open up the whisky's world. And of course, as a master of color, Miles Aldridge was the obvious talent to bring our vision to life."

Some touches we appreciate: the easygoing, stylish rhythm, and the fact that you don't see a single face, even as many kinds of people are artfully conveyed. It's also a pleasant departure from other whisky ads.

Whisky is a category that often feels weighed down by its own sense of legacy; even when it's having fun, the palette is somber and smoky, always tipping more in the direction of self-importance. Glenmorangie is light and frothy here, more Cointreau-adjacent than Glenlivet, say.

"Throughout the campaign we peppered little Easter eggs, little things to find," Aldridge says. "There are anagrams of Glenmorangie: 'A Ginger Lemon' in the train, and 'Mango Reeling' as a neon. As well as the anagrams, each of the visuals has the recurring motif of the giraffe. The idea was that these would appear in each of the visuals like little games, almost cameo performances. The amazing thing about this campaign is that it's so contrary to what we're used to with whisky campaigns. For Glenmorangie to have the courage to take on this campaign is really refreshing."

Here are the print ads that round the campaign out, highlighting different moments in the work above: 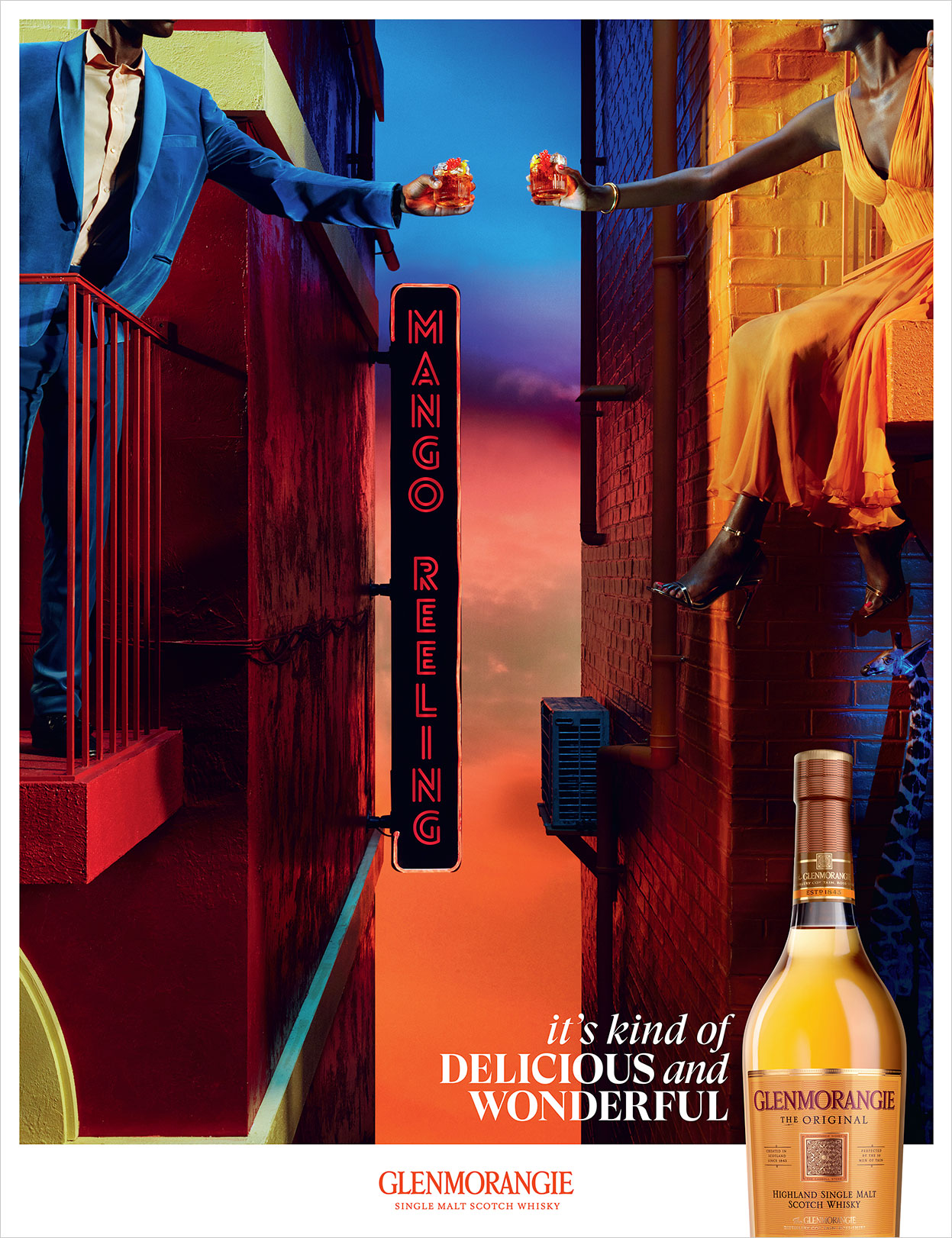 "We make whisky because we want people to enjoy it," says Louise Dennett, global head of brand at Glenmorangie. "There are many technicalities as to how we make it taste so good. But ultimately, what matters is that our single malt is delicious, and that we open the doors to the wondrous moments you can have with our whisky."

"Because we think there's a simple joy in that. Through our collaboration with Miles Aldridge and DDB Paris, we have created a visual feast of a campaign. We hope it will welcome more people into our delicious and wonderful world."

A :30 ad completes the series. Check it out below.

Glenmorangie
It's kind of delicious and wonderful