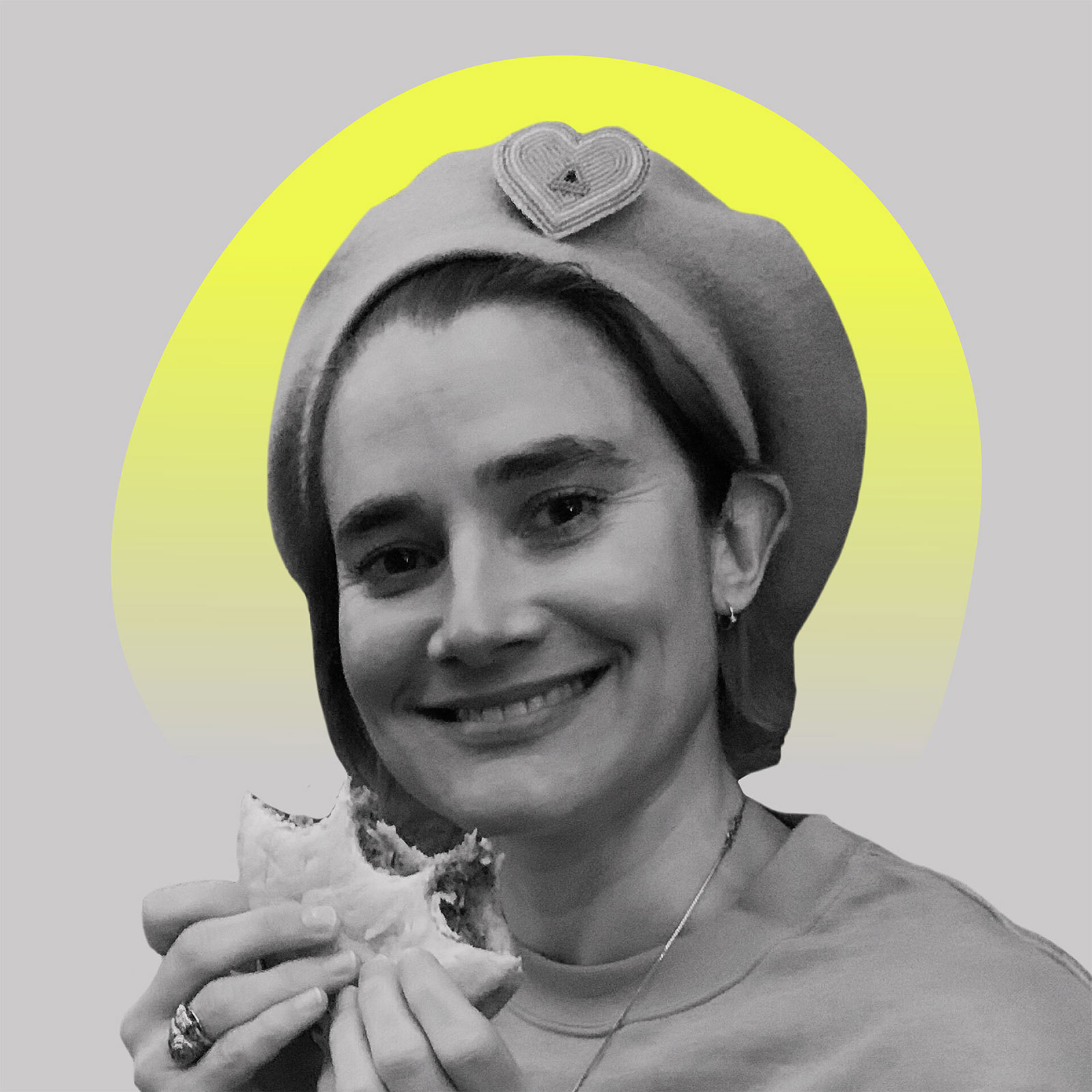 Lauren Olson is a Portland, Oregon, native working as a copywriter at Portland agency Öpinionated. Before entering the advertising world, Lauren spent well over a decade writing and performing comedy in New York City and L.A.

We spent two minutes with Lauren to learn more about her background, her creative inspirations, and recent work she's admired.

I grew up in Portland, Oregon. Moved to NYC. Then L.A. Now I'm back in Portland.

My mom used to always say it was the picture of the penguin and the egg I drew when I was 3 or 4. She lamented as I got older that my drawings got less creative and just did pictures of people, or a landscape with a tree and a sun wearing sunglasses. I don't remember drawing the penguin or the egg, and it's lost to history, but according to my mom it was my creative apex.

My cousin Matt. He is about 13 years older than me and I thought he was the coolest. After college he moved to NYC and got a job writing for SNL. We would always tape the show and watch it the next morning, sometimes he would be an extra in a sketch or one of the people asking a question from the audience during the monologue. If it wasn't for him, I wouldn't have watched so much SNL and I don't think it would have even occurred to me that writing comedy was a job that existed. I really wish I still had the late '90s-style SNL hat he gave me when I was like 13.

On a whim, because a friend wanted to go but was nervous to go alone, I went to an audition for the improv group at University of Oregon. I got in, starting what I didn’t know at the time was a many-many-years-long bender of performing live comedy. Through it I met one of my very best friends and future comedy partner Jana. Without Absolute Improv, I might never have ended up in New York or gotten into comedy.

Kesha. Most of the stuff I gravitate towards is upbeat, bright or colorful with at least a dash of dark or weird or offbeat. My very favorite musicians are those that have an intrinsic sense of humor in their songs. Kesha's songs are equal parts make-you-feel-something-in-your-guts / make-you-laugh-out-loud. She doesn't hold back and I dig it.

I've got two because I'm greedy: Family Business on Netflix. My creative partner Nate Corrado gets all the credit for this one since he told me about it. It's in French, which he speaks and I only have a basic six months of Duolingo comprehension of, but despite this, it’s hands down one of the best comedies I’ve ever seen. I want to re-watch it soon which I never do, but it surprised me and made me laugh so hard. Louise Coldefy as Clémentine Cendron is one of the best characters ever created. Watch it please.

Hacks on HBO Max. It is just great. So good. Did I mention I enjoyed it? Just watch it. It’s good.

Clémentine in Family Business is giving her a run for her money BUT Susan Vance - Katharine Hepburn's character in Bringing Up Baby is the OG top dawg. She's nuts and I'm here for it.

Recess Therapy on Instagram. It's a simply delightful man interviewing kids. The editing is amazing and my creative partner Nate and I watch (and re-watch) it every few days when we need a laugh or cheering up mid-concepting.

Completely stopped my dating life in its tracks. BUT it gave me an opportunity to spend a lot of time with family, which is why I moved back to Portland in the first place. I'm really lucky to be part of a big blended crew, several of which are having a bunch of extremely cute little kids for me to party with. And speaking of cute little kids, did I mention I’m still on the hunt for a father for my cat Felix? He’s a very good boy, and I have his rearing well in hand, so if someone wanted to just be around as a positive male role model for a fluffy long haired tuxedo who comes when he's called, can sit on command and loves to play fetch—I’m currently accepting applications.

Powell’s by Powell’s perfume commercial for Powell’s Books. During the first year of the pandemic, Öpinionated did work for Powell’s Books. We created an actual, physical perfume that smelled like the iconic bookstore for those who missed being able to go into the store—because if you can't be there, at least you can smell there. Nate and I made a luxury-perfume-inspired commercial for it, which was shot in one day at Half Court Studio and edited by a frequent collaborator of ours, Lucky Day. This project was not in our original scope of work, but instead something our CD’s Mark Fitzloff and Rob Palmer encouraged us to go for because of the creative potential they saw for it. It was so fun and exhilarating to get to shoot what felt like a sketch I would have made with my comedy friends in NYC, but this time we had a (small) budget, and instead of funding it myself, I was getting paid—because this is my job now! Super cool, yes? It was a nice reminder during the middle of a tough time with Covid that I'm in the right place doing what I’m supposed to be doing. I love being on set, especially in a scrappy low-budget situation when you have limitations put on you and get to collaborate and problem solve with talented creatives. It was wonderfully stupid, fun and delightful and I'm very proud of it. I'm also in it.

Another Day, Another Drumstick campaign for Drumstick. Nate and I got to collaborate with the magic makers at House Special to create and build a whole world in miniature for our character Dr. Umstick, and bring to life some delightfully weird, fun work. It’s very validating to get to see stuff in the world that has our voice and sense of humor in it. In addition to this work, we were given the opportunity to take all the elements we shot for the campaign, and repurpose them into a longform narrative spot. Our frequent collaborators at Lucky Day and Th3rd Sound did the edit and mix respectively. Seeing it come to life was the cherry on the top of a dream project.

Not to toot our own horn… but…Toot! Toot! At the same time we were shooting Drumstick, another creative team at Öpinionated, Cameron Soane and Scott Fish, created a super cool spot for Miro. It’s fun, beautiful and just the right amount of weird. I feel really lucky to get to work with such talented people at a place that puts so much value on creative ideas.

Playfulness. I am pretty hyper, and if I am stagnant too long I get restless and need to get my wiggles out. Playing around usually opens me up to some unexpected connection or idea that I hadn't considered before.

Distractions. Welcome to the dark side of playfulness. I am easily distracted—which can lead to interesting ideas (see above), but it also means I have to be uber aware of my distractibility and structure my time in a way that sets me up for success

Making someone laugh. It never gets old. Also, gardening.

Not having a hand to hold.

Directing. Voicing animated characters. Writing comedy for TV and films. Working at a garden center. I’ll get to it all eventually, if I don’t get distracted by something else first.