On her work for Nike and The Africa Center, and mentoring creatives of color 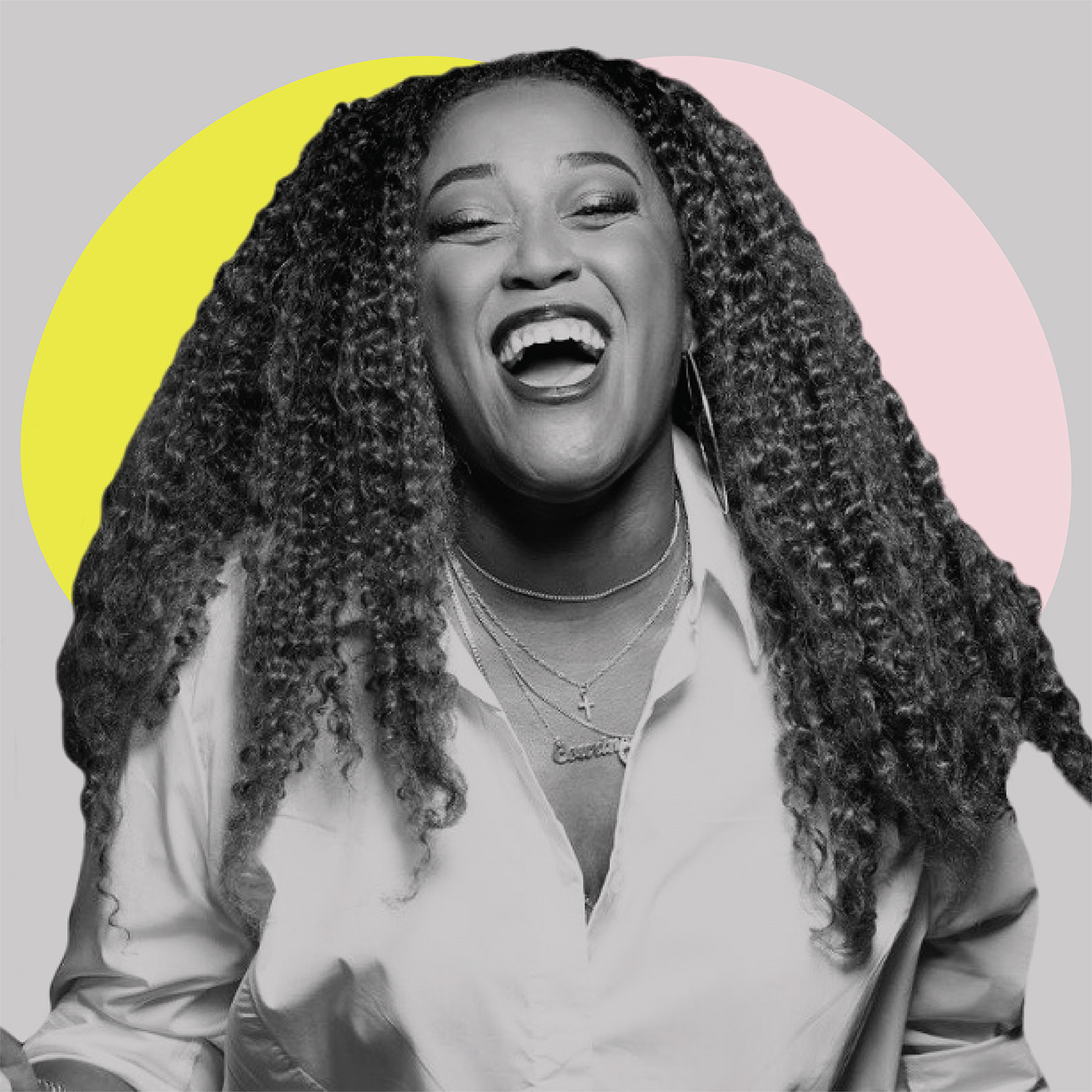 Courtney Richardson is an award-winning creative director at Droga5 who kicked off her professional career 11 years ago in television, doing digital marketing at AMC Networks for cult favorite TV shows such as Breaking Bad, The Walking Dead and more.

She got her first professional foray in advertising right after that, working for a few years managing multimillion-dollar lifestyle and hospitality accounts at a boutique creative agency. She then spread her creative wings, leading marketing and PR for Lush Cosmetics North America, helping to oversee the U.S. and Canada. She pursued her love of beauty with director roles and circled back to the entertainment industry as creative director for Paper, where she led projects on both the editorial and in-house creative-agency side.

We spent two minutes with Courtney to learn more about her background, her creative inspirations, and recent work she's admired.

I mainly grew up on the West Coast—the Bay Area, to be exact! I went to high school with some creative folks, such as rapper G-Eazy and filmmaker Colin Tilley. Plus, it's the home of greats like E-40, Mac Dre and the The Black Panther Party. Oakland and Berkeley, California, raised me and influenced a lot of who I am today. And now I live in the iconic New York City neighborhood of Harlem, which is also a legendary mecca of Black culture that I'm proud to call my home, too.

During my formative years, my mom put me in Montessori School, which had a huge hand in giving me the freedom to explore my interests without the guardrails of a conventional and regimented education. It was there that I was drawn to the arts and writing ... the rest is history! From then on, all my report cards would always praise my knack for making things in my creative arts classes and being highly imaginative and innovative. But I can't say the same for my math classes!

When I was growing up, my uncle was a music-video director who was behind the visuals for the Wu-Tang Clan, Snoop Dogg, Master P and other hip hop artists. I would spend summers on set with him and was just in awe at how cool and creative he was. It was such a different role than what I was used to seeing around me. Those summers as a kid were most definitely pivotal in sparking my passion for storytelling.

Early in high school, I started really tapping into my roots and embracing what it meant for me to be a first-generation Black American being raised in an immigrant household. Within that discovery, I knew I was born to be different as I already stood out in my family early on as a creative coming from a long line of doctors, lawyers and politicians. My maternal great-grandfather was the 15th president of Liberia and was instrumental in the country being only one of two independent African nations to never be colonized. My maternal great-uncle was the 18th president of Liberia and the first Black head of state to visit the White House and the first Black guest to stay overnight.

This didn't come without controversy, though, as U.S. presidential aides ignorantly urged (but failed!) to convince the White House to disinfect its toilets with Lysol before his arrival, because they believed people from Africa carried venereal diseases. He also was the first Black speaker to address a joint meeting of Congress, and by doing so, helped to integrate the White House press corps, as Black correspondents weren't allowed at the White House—until his visit. My paternal grandfather was a solicitor general and my maternal grandfather was a prominent doctor in West Africa. My dad is a former ambassador and permanent representative in the United Nations, and he is a U.S. ambassador.

I share all of this to say that this was a pivotal time of discovery for me as an aspiring creative. I realized that although I come from a long line of public servants, we are similar in that we all dove into our passions in order to create change and to create impact. And that's exactly what I aim to do in the creative industry: build a legacy of pushing the culture forward for the better.

I'm such a diehard fan of music. My heart is breaking just thinking of choosing one artist or band. So, I'll give you a few that I admire. I think Teddy Riley is a pure genius and doesn't get the credit he deserves. To be the pioneer of new jack swing and create an entire music genre is hella epic. Plus, I'm a sucker for music from the late '80s and '90s! I also dig how Tyler, the Creator is able to reinvent himself with every project he releases and seamlessly bends genre. Tina Turner is the epitome of resilience, and her legacy proves it's never too late to make your dreams come true, no matter how many times they evolve. And last but not least, Solange Knowles. She literally wrote the soundtrack of my life as a Black creative and brilliantly crafted what I encounter on the daily as a Black woman with 2016's A Seat at the Table.

Hands down, Jacqueline Broyer from the 1992 film Boomerang, played by Robin Givens. Jacqueline was so fly, matter of fact and damn good at her job, both professionally and personally. Some consider her the villain, but I consider Jacqueline the hero! I still find myself having the same surreal emotions I had as a little Black girl, watching for the first time ever a character who was an advertising executive who looked like me and telling myself that's who I wanted to be when I grew up.

@witchablackads is a dope podcast that unapologetically examines advertising through a Black lens; @ivormerlyknownas is a dear friend and one of the most talented creatives I know; @seeinblackproject is a visual feast; if I ever need a boost or a pick me up, I head straight to @wetheurban; for a laugh, you'll find me on @overheardnewyork and if I had the opportunity to spend 24 hours on social media every day, it would be at @r29unbothered.

Covid-19 was my moment to take the idle time to tap into myself and embrace my work and lane in this space. I feel like I found myself and reclaimed my time as a creative.

So many to choose from! Definitely my Black History Month series with Lena Waithe is up there. But I don't think anything tops the Nike's "All for 1" campaign that I wrote and directed. I was able to push Nike to break out of the comfort zone of athletes and focus on the resilience of local change makers. The campaign won a ton of awards for featuring mission-driven organizations, pushing boundaries and sparking important conversations. I'm most proud of it being the catalyst for Nike becoming an official partner of Black Girls Code and donating $1 million to the organization.

Our "Home Is Here" campaign for The Africa Center. Not only was it a pro bono campaign that shed light on an important establishment and cause, but it meant so much more to me. It was work that didn't tell the narrative of Black trauma or being the "first this or that" in order for people to pay attention. It was a campaign that celebrated Black joy at its core. Simply put, people of the Black diaspora enjoying a Saturday afternoon in Harlem. It also got love from Cynthia Erivo and Lupita Nyong'o for this.

The Africa Center – Home Is Here

Ulta Beauty's "MUSE" by McCann is absolutely stunning and unapologetic. It's directed by my homie, Joshua Kissi. It's the kind of work he and I often talk about wanting to create and see more of in the world.

Not having a typical ad school or advertising career path. Some will tell you otherwise, but there really is strength in being an exception to the rule. When you have a background like mine, you're well rounded, you bring a different perspective to the table and aren't defined by how things are usually done. Instead, you can blaze paths and invent new ways for how things can be done, which I think really brings a fresh and much-needed creative energy to our industry.

Lack of sleep. I don't get enough of it and need to change that. If I'm not fully rested, I feel like it stunts my creativity.

Dance, pop culture, the perfect matte lipstick, my skin-care regimen, the color gold, sipping a cup of tea to the sounds of Jhené Aiko, french fries, my growing vinyl collection, and most of all, mentoring women and creatives of color.

Performative allyship. If you're not authentically and genuinely about creating real change for those who are historically marginalized, please have a seat and get out of the way.

I would definitely be a national radio host and DJ. I had a popular radio show in college and DJ'd my fair of parties back in my day. Looking back, I even used to design the posters for my show and for my gigs.