As the COVID-19 pandemic continues to wreak havoc on everyday life, we're checking in with people in the creative industry to see how they're faring. Here is how Andrew Gall of Seattle agency Copacino + Fujikado is holding up. 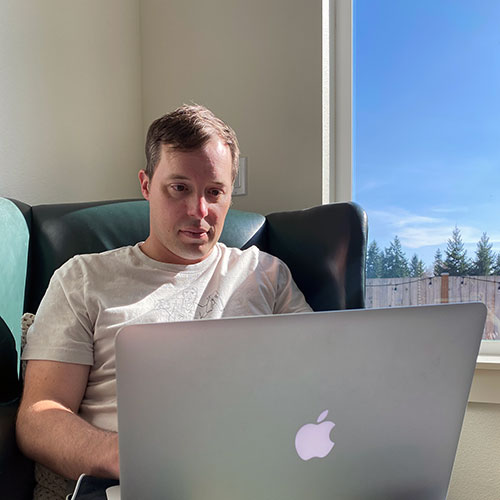 I'm a group creative director at Copacino + Fujikado in Seattle.

While there's plenty of work currently paused (we just finished editing year 26 of the Seattle Mariners campaign, but that won't air until baseball is closer to its return), we're not slowing down by a long shot. Currently we're helping numerous clients with immediate needs in the new COVID-laden world, and with various healthcare and insurance clients on our roster, they all have something relevant they can say right now. So we're figuring out the best ways we can help them.

Incidentally, we were planning an impending long-term WFH situation regardless due to an upcoming office remodel beginning in April. So it feels like we may be better prepared for this—at least mentally—than some others in the industry may have been.

Lots of Zoom, lots of Teams, lots of Google Doc sharing. Everyone has jumped in and embraced this new reality with gusto, and it's been really interesting to see. It helps that one of my main collaborators, fellow GCD Vince Soliven, lives two houses away, so we can always just shout ideas (at a six-foot distance) across the cul-de-sac.

I'm lucky enough that in normal times, my wife is able to stay at home with the kids. Now, we all stay home! It's a juggling act, for sure. I try to get up early enough before the rest of the family to get a few solid focused work hours in before the madness starts. This week, my son has decided to wake up far earlier than usual on two of the days. On the third, he had a nightmare and slept in our bed. So it's been more than a little touch-and-go. That said, I get to see my family almost whenever I want, all day long—which is a blessing. Before my last Zoom client call, we were watching the Macy's Thanksgiving Parade on his iPad (he loves parades).

My main time earmarked for reading expansively was my commute, which is now gone (for better or for worse). I just finished This City Is Killing Me, a social worker's story about interacting with various patients and their struggles living in Chicago. In retrospect, very relevant in a lot of ways to the current state of our world.

We just started re-watching Mad Men this week for the first time since the series aired. It's going to be a fun ride going back through Don's journey.

Hip-hop and soul. The new Jay Electronica, to name one. Anything upbeat and uplifting at this point. With a dash of "The Wheels on the Bus" and the Paw Patrol theme song mixed in.

I get up pretty early so I can get a run in almost every morning. If the rest of the day falls apart, at least I've done that. I was playing hoops once a week in a rec league, but that's obviously on pause for the moment. Chasing two small children around during most of my waking, non-working moments helps, too.

Be focused. Plan ahead. And for if you need to go retail for toilet paper, consider an unexpected source like Home Depot. We also live nearly a literal stone's throw from Costco, which doesn't hurt.

My son declaring loudly that my conference call was "boring" while said call was in progress. He had a point.

Our managing director, Scott Foreman, has begun sending daily messages with strange backgrounds and outfits. Today, he was King Tut.

This situation has been a blessing in a sense that it trims the fat of the office-based workday interruptions. Yes, a lot of magic happens during the hallways bump-ins, but this week I've experienced plenty of those on Teams, too, where I get a random chat from someone that starts with "What if we did X?" The key is the willingness to share ideas openly and being somewhat fast and loose in terms of idea polish. But I personally have enjoyed being able to focus more on the making of and less on the talking about.

If there were any barriers to the agency world embracing remote work, they're going to be nearly if not completely eroded by the time this is all over. Anything can get done with enough collaboration and a team who embraces the possible rather than saying no. Yesterday we went from concept to proof-of-concept edit to client presentation in a half-day. Now, we're just waiting to see if they want to run it.