As the pandemic continues, most folks are still working from home—and may be for a long time to come. We're checking in with creative people to see how they've been faring in their new setups. Below, we hear from George Ellis, co-owner and creative director of Bandolier Media. 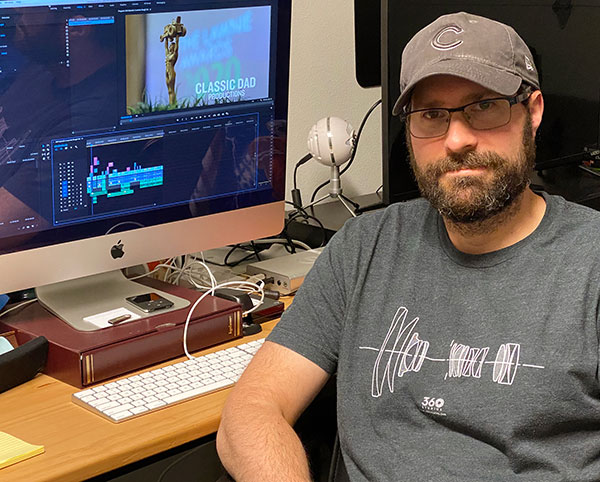 Co-owner and creative director of Bandolier Media and Classic Dad.

I'm in Austin with my wife, our 15-month-old daughter and our two cats.

Trying to get a few hours in during the day, and making up for it at night. We normally shoot a lot of videos, so that has changed. Luckily, we filmed a content series the first week of March, so I've been editing that footage while also working on other social media creative such as memes and the like. One of my partners, Louis, has always filmed viral style content with his phone, so we've been putting out those videos since day one of shelter in place.

If you generally work in an office, when you do you expect to return to it?

With just four people at our agency, getting back to the office hasn't been our top priority. Even before Covid, we kept pretty odd hours, with two of us on the early shift, one who showed up at 10 and another who came in after lunch and stayed late.

We've actually been having one or two current client or new business meetings a day, so that's one outlet. Everyone seems much less formal these days, which is great. I also wave at other parents and their kids/pets during daily walks with my daughter. And 278 percent more texting than usual.

My wife also works, so we're splitting time having our daughter follow us around, strongly suggesting we feed her or play with her, depending on her mood.

I read on my iPhone every night before bed. Currently going through a detective phase, so right now it's the first in the Harry Bosch series (Michael Connelly). Before that, I read the Millennium series (Stieg Larsson). I'm also writing a book. Very, very slowly.

I haven't been watching much.

I realized when you walk 30 minutes once or twice a day pushing a baby stroller, it's an easy way to lose 15 pounds. I also ride the exercise bike every other day and do basic dumbbell stuff.

An herb garden in the backyard. The plants are not all dead yet. In other words, success!

A video call. A cat sleeping in my lap under the desk (out of view of the camera) that suddenly decided to wake up and freak out.

I can't remember the creative's name, but I was on LinkedIn one day and he wrote this great essay about how working from home allowed him to see his son's first steps. Two weeks later, I saw my daughter's first steps. And now I see all the steps. ALL OF THEM. The aha! moment for me was realizing that once this is over, I'm actually going to have a much stronger relationship with my kid than I would have had otherwise.

I subscribe to the Bill Goldman school of thinking that "Nobody knows anything." So my pure, and likely inaccurate, guess is that traditional office hours are gone forever in the ad industry ... to the extent they ever existed.