As the COVID-19 pandemic continues to wreak havoc globally, we're checking in with people in the creative industry to see how they're doing. Here's an update from Drew Hodges, a creative director known for his celebrated work on Broadway shows, founder of DrewDesignCo, and professor at the Maine College of Art. 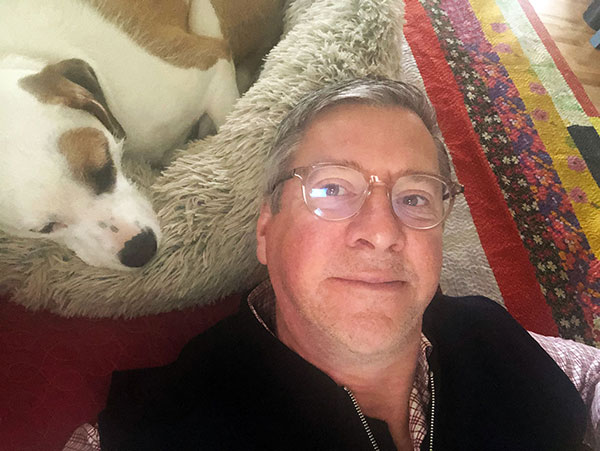 Portland, Maine, with my husband Peter.

I was heading across town to my empty office in the Back Bay area of Portland (the Soho of Maine) for the last few weeks. Now, I am just home, having taken my favorite guest bedroom over as an office. Lamps from Bologna, Italy, and a view out the window of the garden, which is going to be our saving grace this year.

I talk on the phone a lot. FaceTime is newish to me. We live in a great walking neighborhood, so everyone walks the dog and stands in either the middle of the road or the sidewalk—kind of two lanes of traffic. Obviously I am on three or four Zoom calls a day for various projects, and those are all with friends who are clients from the years of my career. My husband is finishing a book for Yale (seems fancy, no?), so he was already somewhat socially distanced for this whole winter—but he is a horticulturalist, so he has a preface to write, and then it's off to the greenhouse (still more fancy). Honestly, I keep my Instagram fairly private, and all those people are friends, so I enjoy seeing them every day. And lastly, Frances, our 2-year-old rescue dog, is the receiver of constant adoration.

Currently I am reading all the health things everyone sends me, the Times, the Atlantic, various scripts, and the Churchill saga The Splendid and the Vile. Next up is Elton John's autobiography and Cleanness by Garth Greenwell.

Dueling episodes of The West Wing and RuPaul at night seem to provide balance. Schitt's Creek, coming up to the finale. Jeopardy. Gonna go back for Mad Men—I never watched it because the one episode I dipped my toe in had the British firm buying the agency and the Christmas party mower incident, and my firm had just been bought by a British group and it was just a little too close to home. Devs on Hulu. Not that Tiger King thing. Too creepy by half.

Elton John's Captain Fantastic for nostalgia. Beck's Morning Phase for breakfast. Alanis Morissette's Jagged Little Pill for research. Gomez. Bruce Springsteen's The Rising—because it reminds me of so many feelings of strength and heroism from 9/11. Shaina Taub. A dancer I love, Robbie Fairchild, keeps putting videos out to a new (to me) R&B performer named Emily King. Dial up Georgia. And dance.

Decided to lose 20 pounds—ordered Nutrisystem. It's monotonous but it works, and less trips to the grocery store.

I have a painting studio, so that's another solace, although all my models have decided six feet is not enough distance. Self-portraits?

My neighbor is a doctor. She says "when going to the store, don't don't touch your face, don't touch others, Purell when you leave, and you will be fine." I wear my winter gloves.

I had to video interview with the 12 most powerful producers on Broadway, at once, on Zoom for an upcoming enormous undertaking. I called it oral arguments in front of Broadway's Supreme Court. Almost all of them have been my clients at one time or another. But pitching and reading the room when there is no room to read? And your computer is sitting on a bunch of cookbooks to avoid a flabby looking chin? Awkward. I made a Ringo Starr "I hope we passed the audition" joke, and got off the line. I think I got the gig.

I am working with an amazing director named Jon Kane. We did the commercial for Chicago the Musical 25 years ago. It proved to be iconic in my small world, and he was the reason. He has just finished a five-year gig as creative director of the Jean Nouvel National Museum of Qatar, and we started to work together again, almost by chance or fate. I mentioned how happy he seemed. He wrote me a lengthy email that he genuinely was in a great place, seemed thrilled and validated that I noticed, and invited me to collaborate with him more than I was. I was playing it fairly "hands off," based on exactly how great I think he is. That was joyful.

Well, a friend from London texted me that he had "it," and then responded with few words for several days. That was an aha! moment, as in "aha—this is very very real". And the loss of playwright Terrence McNally hit me hard—I had worked on eight different theater projects with him on Broadway. A great and brave writer, and his husband is a friend.

Finally, realizing that the dichotomy of the world being very dire while my home and career world is filled with love, friendship, support and warmth.
It felt good to name it.

Over time. I know people will come back to the theater. They did last time. The joy of coming together is irreplaceable.