Everything I Needed to Know to Succeed in Advertising, I Learned at TGI Fridays

If you've ever been a server, you understand

At times, we can all be a little judgmental in the ad business.

One of my first bosses would say, "You can tell a lot about a creative by looking at their shoes." His steadfast rule: The cooler the shoes, the more questionable the creative, and he was usually right. Sometimes I find myself walking into those wonderful all-agency meetings and casually glancing beneath the conference table just to see what I'm dealing with.

Footwear aside, no question has served me better when assessing talent in the ad biz than this one: Was this person ever a server at TGI Fridays?

This question helps me figure out who I want to work for, with and for me. It's far more important than contemplating who you'd want to be stranded on an island with—obviously I only want to be stranded on islands with people who served at TGI Fridays, probably so we can talk about boneless sesame jack strips while we suck on dry coconuts.

When it comes to answering this question, I'm batting 1,000. If you've ever been a server, you understand. We're easy to spot.

For example: The account person who sends client feedback in a haphazard flurry of texts, emails and Google Slide notes? Never worked at TGI Fridays. Nope. Not a chance. That's like going back to the kitchen three separate times to get mayo for Table 15, the check for Table 4 and butter for your bar guest when you could've just made one trip. A TGI Fridays alum would consolidate that feedback into one nice clean bulleted list. They'd probably also highlight things and maybe even put something in bold font that really needed attention.

The creative who can't handle a shred of client feedback has never worked at TGI Fridays. You see, at TGI Fridays we'd get our asses handed to us daily by middle America and take it with a smile on our faces and our flair still sparkling. You haven't lived until you've been yelled at because an $8 steak was a little tough. Ma'am, IT'S AN $8 STEAK. Plus, you put A1 on it.

Let's adjust our expectations here. If you think a client is talking down to you, you've never been told, "You're not putting a large enough chocolate sauce swirl at the bottom of the Ultimate Mudslide® goblet." To this day, the word "mudslide" sends a bead of sweat dripping down my left temple.

And let's consider the producer who looks you dead in the eye and says "Yes, absolutely" to a question you know the answer to is most definitely no. Let's not kid ourselves: There is not time in the schedule for a rehearsal day. There is not money for that crane shot. And you will not be getting the Fourth of July off, from your lunch shift or from the production that's scheduled around the client's daughter's wedding. This is the real world, folks. (I should caveat here that most producers have worked at TGI Fridays, so if you find one who hasn't, you're royally fucked. Run away.)

My creative partner, Leslie, was not a server at TGI Fridays, but was a server at a series of mom-and-pop grills throughout high school and college. This brings its own flavor of life preparation: less flair and trademarked menu items, more unorthodox "side work" and making things up as you go.

She shudders at the memory of filling tiny plastic ramekins with ranch dressing from giant one-gallon Hidden Valley drums purchased by the restaurant owner at Sam's Club that morning. A stubborn crust forms around the opening of that drum. She has her own version of the server-no-server question when interviewing young creatives: If you hand them a cardboard box and kindly ask them to "break the box down," they should immediately go into action. If they give you a McKayla Maroney staredown in response, they are not the creative for our team.

I was a server while in portfolio school in Minneapolis, blocks away from Fallon. During the lunch rush, Fallon people would saunter in and I'd sling them burgers and domestic light beers. They all seemed effortlessly cool, or at least cooler than me. A consistent paycheck and the absence of a grease-stained apron will do that for people. As I worked, I'd daydream about when I'd sit on the other side of the bar. I imagined I would talk about my impressive advertising job and have enough cash to leave a super nice tip. Like all past servers, I'd leave a super nice tip even if I didn't have the cash to do so.

Life is funny. I'm now co-ECD at Fallon New York, building a killer creative department full of ex-TGI Fridays employees. Portfolio school helped me get here. TGI Fridays helped me more. There are days I catch myself complaining—about the industry, or the hours, or the stress. But in those moments, a tiny voice reminds me: The thing I need most isn't a great brief, or a raise, or an award. It's a double shift on a Friday night at a TGI Fridays.

It's good for perspective. It's good for the soul. And beer never tastes better than it does with your feet up counting your tips with the faint aroma of sweat and onion rings on your clothes.

So … anybody need a shift covered? Call me. 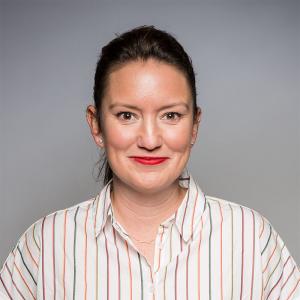