Could I Start My Own Agency?

Advice for when you're ready to take the leap

Pretty early in your advertising career, you look at agency bosses and think to yourself, "Could I start my own agency?"

And even though for years you know the answer is no, the curiosity never leaves you. Especially when you're getting tied up in the bureaucracy of a larger agency. Wouldn't it be nice to fully reap the rewards for your efforts? And my latest project has given me a glimpse of how it could be going it alone.

Online casino brand PlayOJO approached me and my creative partner, Dan Harrison, over Linkedin. You never expect a brief to just drop into your lap. But this one did.

We're at a crossroads where we could leave freelance life behind and focus on building our own client base. Having produced a campaign for a fintech client toward the end of last year, we're starting to build momentum.

It's a strange feeling being put in charge of the budget when that's always been someone else's domain. I mean, how much does it cost to make an ad? How long is a piece of string?

For the PlayOJO commercial, once we had the agreed route, it became easier to work out what the costs were likely to be ... And for many of them, it was easier and more transparent for the client to cover them directly.

What you become acutely aware of is the number of decisions it takes to make an ad—creative ones, financial ones, production ones. And no one else is going to make them for you. Are we going to buy our 3-D models? Do we need to use a render farm? Are the tentacles shiny enough? (They weren't at first ... ) But knowing there was a whole queue of them to be made, I got better, quicker and more confident in making them, like exercising a muscle.

I had a moment when I was on the phone, buying the music for the ad. They asked me for my agency name. I told them January Thirteen, and it made it real right there and then. And why not? The only person stopping you starting your own agency is you.

I've been in the industry for three decades, and even after all that time, this project taught me a lot. My advice to someone in a similar position is to believe in yourself. Self-doubt goes with the territory, but look at what you've achieved in the past and back yourself to do it again. Don't overpromise, and don't underestimate your value. Take advice from everyone you respect. People are flattered to be asked.

It can feel intimidating knowing that everything is down to you, but you've looked on enviously when you felt powerless in bigger agencies, so appreciate the power you now have. Or be careful what you wish for...

But it is a lot of work, managing the client, suppliers, budget and the whole production process—that's on top of your job as creative director. You can't take your eye off any of it, and you're responsible for all of it.

But the sense of ownership is immense. Just the fact that it exists at all is enough to make me feel incredibly proud. 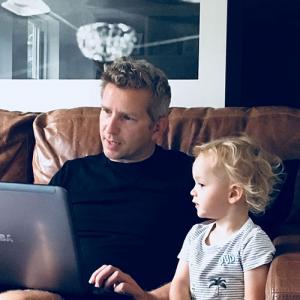