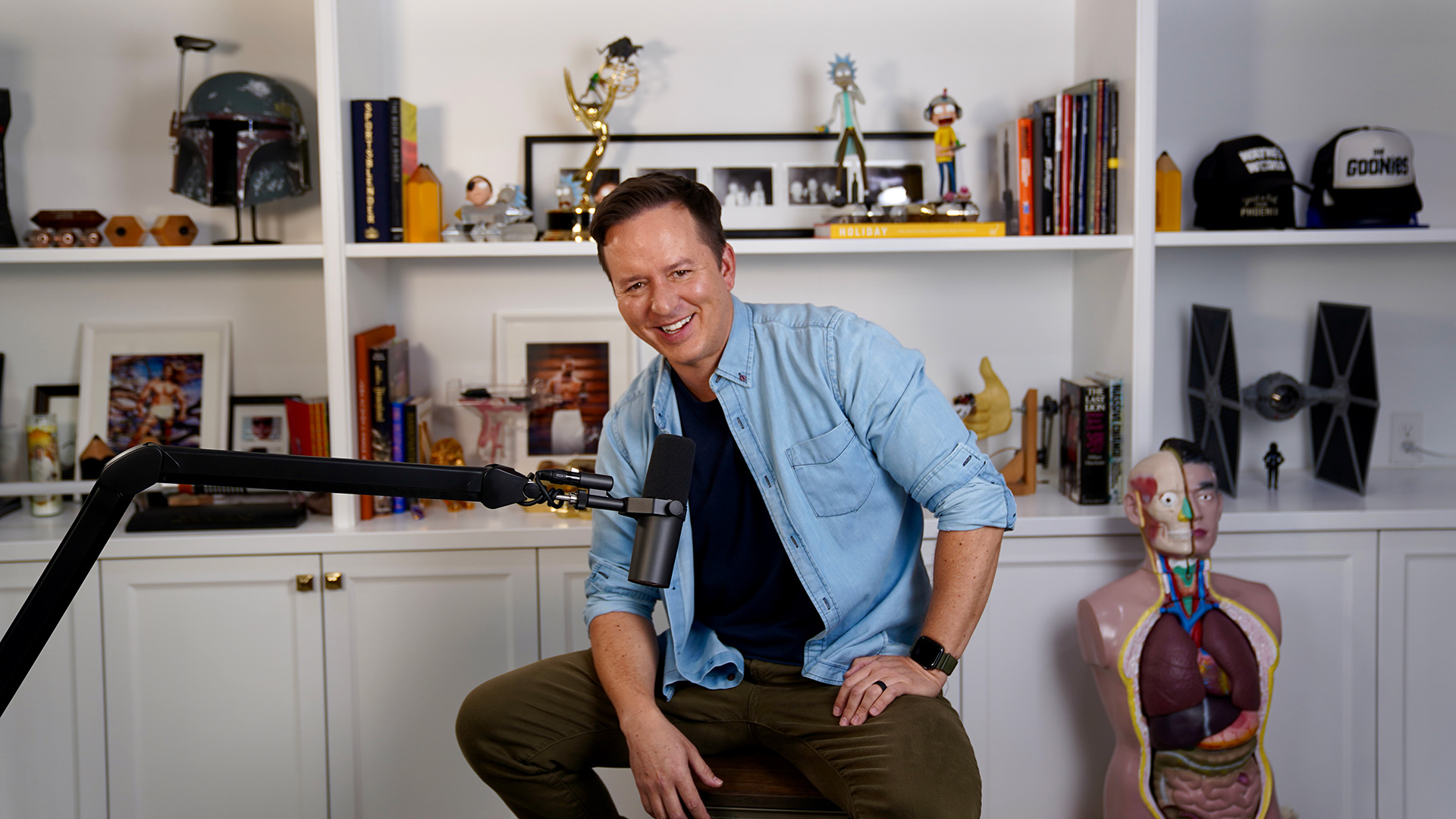 Everyone in the industry wants to get into Wieden + Kennedy. But now, Jason Bagley will bring W+K to you, in a sense, through a mentor/training program that will draw on insights from his 16 years at the venerable Portland, Ore., agency.

Bagley, who joined W+K in 2004 and left in 2020 (a run interrupted only by an eight-month stint as CCO of Deutsch/LA), has created the Audacious School of Astonishing Pursuits and is prepping his first class, Creative Megamachine, likely to start in late October. The course is open to any applicants, but is not a substitute for portfolio school—it's geared more toward people who are already in the business, junior to midlevel, and will have a lecture and discussion format rather than spec work projects.

There is room for 14 students in the first class. Interested parties can visit the ASAP website for details. 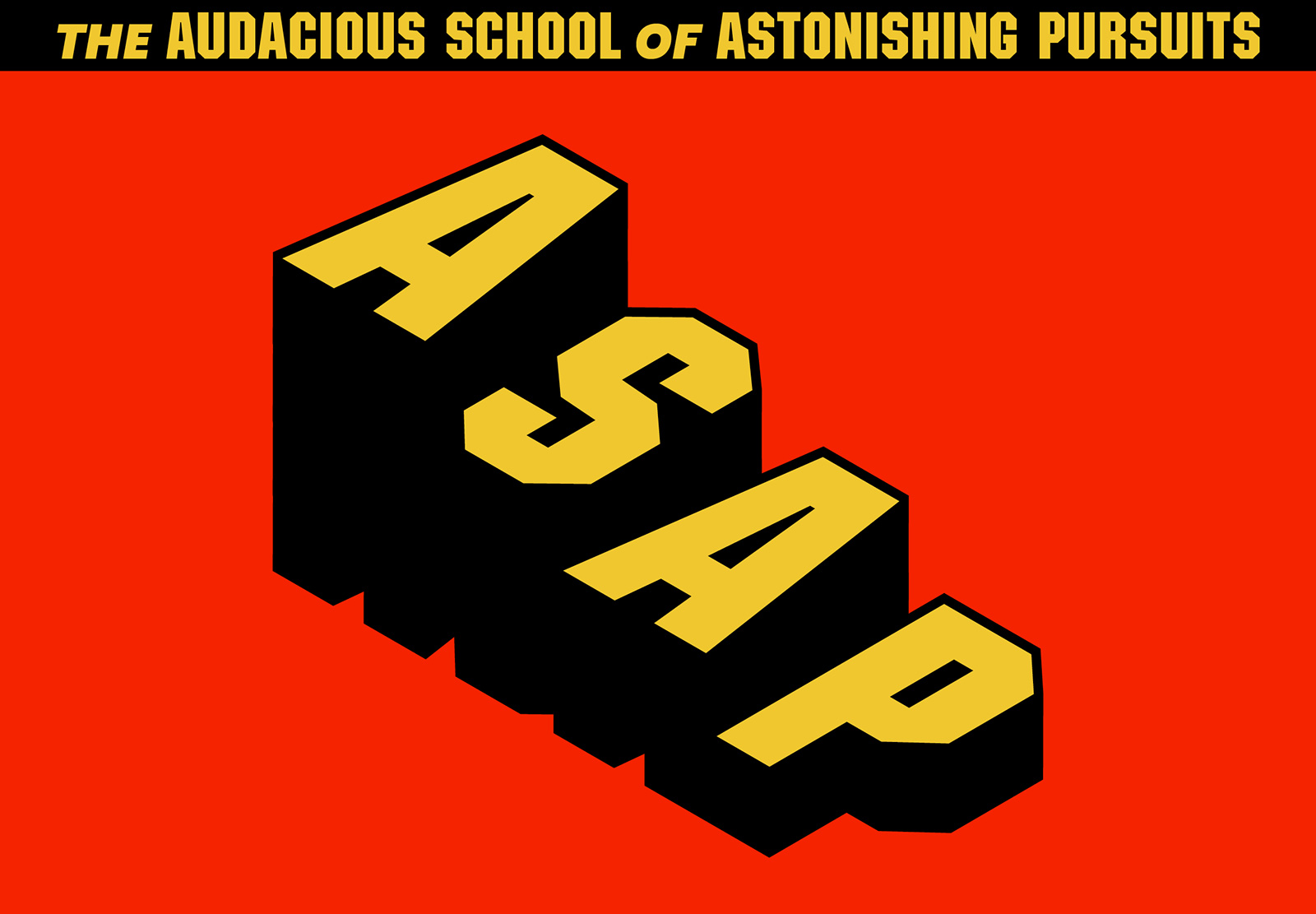 Bagley—whose work at W+K included the lauded rejuvenation of Old Spice—says training programs in advertising are woefully inadequate, particularly for the generation coming up now, and not getting any better.

"I always thought our industry has this sort of sink-or-swim training model, which is basically just neglect," he tells Muse. "The people that are qualified to do the training and the mentoring are stretched to the absolute limit, and that's only gotten worse in the past five years. And the people that are paying the price for that are really the new generation of talent that isn't getting the face time and the access and the step-by-step training that is needed."

He adds: "In many cases, they don't even know that's what's missing. They just know that they're unfulfilled, they're not as motivated and as passionate as they want to be. As agencies, we're throwing everything we can at them to keep them happy, except the one thing that would really fulfill them and give them that sense of meaning and purpose, which is to just see themselves get better day by day."

Bagley says he was as guilty as anyone of not finding the time to properly mentor junior staffers during his career. Yet he looks at the core mission of W+K as a promising foundation for the training program he's starting.

"What I always found so inspiring about Wieden + Kennedy, the reason I stayed there for 16 years, was Dan and Dave's mission of creating a place where people could come to do the best work of their lives," he says. "That's such an awesome concept and such an inspiring concept. That's what I want to continue to do, but in this different format, is what I hopefully was doing there—helping people do the best work of their lives."

The first class, Creative Megamachine, will run for eight weeks. There will be two hour-long Zooms with Bagley each week—one being a lecture of sorts, and the other being a group discussion and Q&A.

"So it'll be between about 20 hours with me in a pretty small group over Zoom," he says. "I'm hoping to be the Obi-Wan Kenobi to their Luke Skywalker."

He also plans to give scholarships as a way to include more underrepresented talent in the programs. 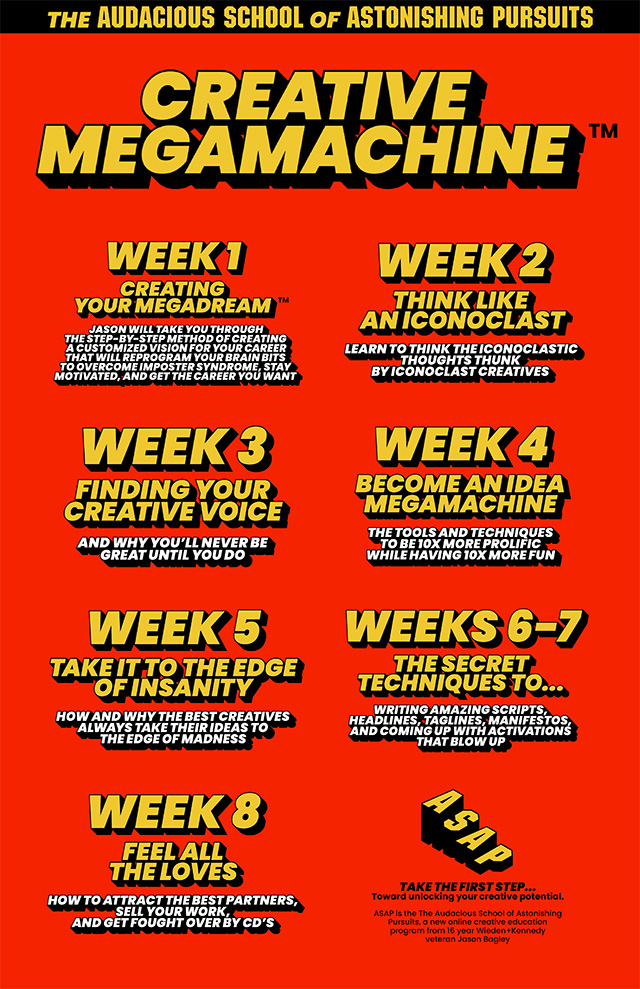 The goal is to communicate "patterns, habits, practices, philosophies and mindsets" that he witnessed while working with all the "insane talent" at W+K. Among his inspirations, Jason mentioned Ryan O'Rourke, Alberto Ponte, Hal Curtis, Azsa West, Darcie Burrell, Eric Baldwin, Craig Allen, Eric Kallman and others.

"You can listen to podcasts and you hear the top-line stories and advice from great creatives, but there's very little out there that gets into a step-by-step kind of blueprint and really walks you through the details," Bagley says. "Before I got to Wieden + Kennedy, I would look at the work being done by the great agencies and great creatives and it was like a magic trick to me. It was it blew my mind. I had no idea how they did it, how they came up with it, how they produced it. It was like a black box of secrets that, unless you worked at a place like that, you could not get access to. I want to try to open that black box of secrets and make it available to a lot more people."