What Advertising Can Learn From the '90s Chicago Bulls

We could all use a little triangle offense

In a time of crisis, many have been captivated by a bit of '90s nostalgia with the Chicago Bulls. If you haven't watched The Last Dance, where have you been?

Spearheaded by global superstar Michael Jordan and inspirational coach Phil Jackson, the Bulls laid down a blueprint which dominated the NBA championships for nearly a decade with two "three-peats."

But did they also provide the model for the successful agency?

The cornerstone of the Bulls' success was the the "Triangle Offense." In short, this turned the Bulls from playoff contenders into serial championship winners. It has reached mythic status in the annals of NBA history, and as a Brit, I won't pretend to be well versed in its intricacies (no matter how many basketball tutorials I watch during lockdown).

Indeed, The New York Times once wrote that in trying to understand this particular offensive strategy, "many have gone mad in [the] pursuit; trying to do so is the basketball equivalent to gazing at the face of Medusa."

However, the basic premise is this: Form a series of triangles in your opponent's court, move the ball quickly and thereby set up a teammate for a clear shot at the hoop. When done well, it can be a very effective way of penetrating your opponent's defence.

Agencies may be not be shooting for championships, but they are shooting for great work and awards. So, such a strategy may prove alluring, particularly when one considers the interplay between teammates in the triangle offence 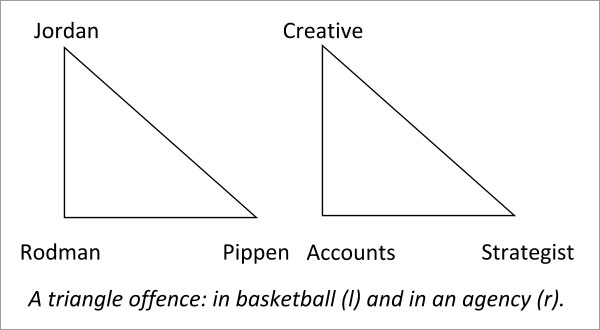 But what's really telling about this strategy is the level of interdependence required by all parties involved. Like all great strategies, it was met with a degree of resistance initially, particularly by Jordan himself. It would be easy to cast Jordan in the role of creative director in the triangle, with all the accolades and fame, but it would also be easy to forget that before Jackson and the triangle, the Bulls had always fallen short, as they had been too reliant on Jordan.

It required Jackson's new strategy to elevate the Bulls team collectively. The rest, as they say, is history. But importantly, it empowered them individually and gave them more options (both of which Jordan enormously benefitted from himself).

According to ESPN Sports Science, the triangle gives a team, in the course of five seconds, 340 different shot options (a strategist can never resist a good stat!). This is exactly what an agency needs right now. Options. In the ever-growing, complicated world of marketing, the more options or solutions an agency can provide to a client's problem, the more likely they will come up with a great idea that helps grow that business.

It also therefore means less reliance on one individual, be it accounts, creative or strategy. After his initial resistance, Jordan would give up title-winning plays on three occasions. Likewise, in a successful modern agency, the idea that the client might end up buying might not always come from the expected source. It is about finding the most effective route to the basket—or in the case of advertising, great ideas—rather than relying on the same individuals to produce the goods.

Of course, this is not to deny, as has been reported, that Jackson's triangle system had probably two of the greatest basketball players ever at its disposal—in Jordan and later, with the L.A. Lakers, the late Kobe Bryant. It depended on raw talent. Just like agencies depend on raw talent.

But it can't go without notice that a team using the triangle offense has won 11 of last 20 NBA championships—a rate of similar success that even the biggest agencies can only dream of. 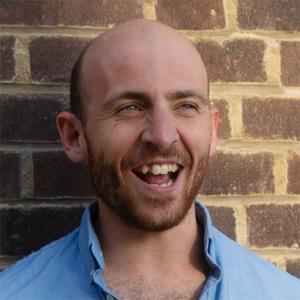