Thousands of cardiac arrests occur in the U.K. each year outside a hospital, and 40 percent of those affected are under 18 years old. What's worse is less than half of U.K. adults—38 percent—wouldn't perform CPR, due to a lack of knowledge.

Leith Agency launched a grassroots campaign in a setting where knowledge of CPR, and how to properly perform it, might be needed: the soccer field.

The agency's Extra Time Badges badges are free to order individually or in team packs of 18. They are ironed onto jerseys in the center of the chest, where CPR is performed. Each badge gives instructions to push 100-120 times per minute at 5-6 cm in depth. Seconds count in sports and are crucial when someone suffers sudden cardiac arrest (SCA). 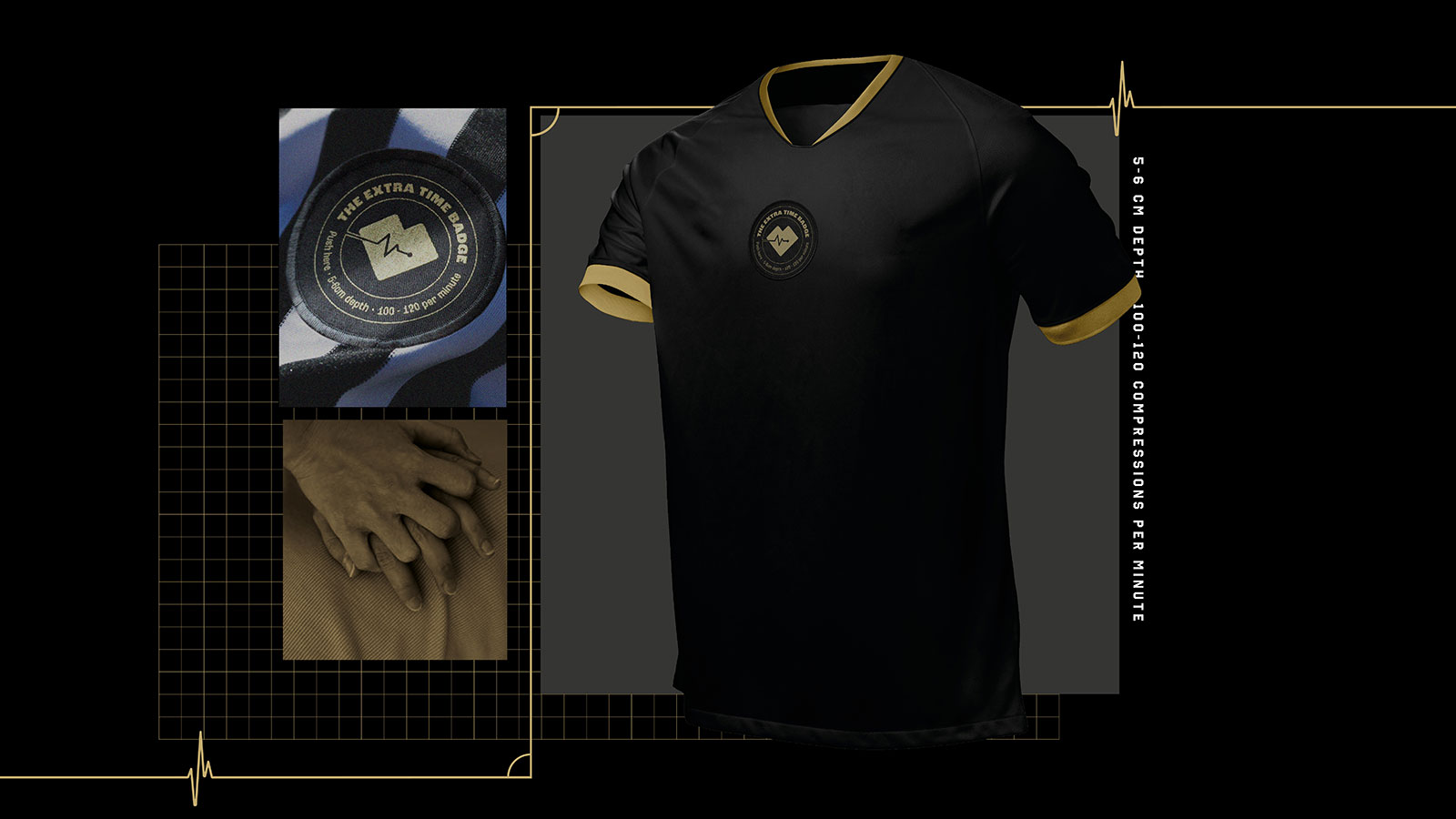 Muse spoke with John McPartland, creative director of health at Leith, about creating a product he hopes no one has to use.

Muse: How did you come up with the idea?

John McPartland: The initial idea came about after the horrific incident that everyone witnessed with Christian Eriksen in the Euro finals last year. After watching the incident unfold, and talking to friends and colleagues that work with grassroots clubs, it became apparent this wasn't something out of the ordinary. Whilst professional footballers have instant access to medical experts, at a grassroots level this isn't always the case. The idea has been through various iterations, but fundamentally it has always been how do we create something that will give as many people the confidence to perform CPR when needed?

Is this for a particular client or a personal, passion project?

It started off as a passion project, and as we've developed it, we've been talking to various clubs and leagues to get their support for it. The idea is to make the badge as inclusive as possible; any sports organization can take part and use their platform to reach as many people as possible. As long as you have a shirt, you can wear the badge.

Is this for athletes of all ages?

Everybody over the age of 8.

What's the overall goal of the campaign?

To get the badges onto as many shirts as possible. It sounds simple, but there's no way to tell who may suffer from SCA, so the more people we get it to, the more chances we have of helping somebody. Alongside getting the badges on people we really hope that more people will participate in full first aid training so that confidence in performing CPR increases. We also want to use the campaign to give people who have experienced a SCA a platform and voice to tell their story. What's strange is that we've made a product that we hope nobody will ever have to use.

How many teams have ordered badges?

We launched the campaign a few days ago, and already we've had a number of teams ordering badges. At last count we had received orders for over 500 badges.

How are you promoting this initiative?

We're currently running a social campaign and looking to utilize professional clubs' online following, working with key figures in the game. At a grassroots level, we are having lots of conversations with clubs and leagues.

Who paid to create the badges?

We have invested as a company in our first run of badges. It's a project that we have been passionate about, and it felt like a small price to pay to potentially save somebody's life. Moving forward, we are looking for professional clubs to partner with us, which would provide badges for more clubs in their local areas.