Raheem Sterling Weighs In on Masculinity in Sports for Gillette

Manchester City star Raheem Sterling, who has suffered racist abuse and been outspoken in opposition to it, makes a heartfelt pitch against toxic masculinity in a new short film from Gillette.

Saatchi & Saatchi and Great Guns director Daisy Zhou—aka DZ—present scenes of young footballers keeping their heads in the game, while Sterling both appears and provides narration:

Gillette | Raheem Sterling: Made of What Matters

"Whatever happens, you don't have to raise your fists to beat your enemies," Sterling says at one point, stressing victory on the scoreboard over angry confrontation. "When we show our best side, we don't just play the game. We change it."

Gillette's working from a familiar playbook here, exploring similar themes a year ago in "The Best Men Can Be." A subsequent spot with a dad teaching his trans son to shave won praise.

Sterling's film finds a middle ground. It's less artsy/affected than the "The Best Men Can Be," but not as affecting as "First Shave." All in all, it's a straight-up appeal for sportsmanship—tonally similar to this recent ANZ campaign from New Zealand. Sterling's own history with discrimination adds bite.

"I offered what I admired and am inspired by in men," Zhou says of her creative approach. "Perhaps it's because I am a woman, I notice these traits more—traits that are less about being 'alpha' and more about confidence, grace and the talent of drowning out the noise and negativity."

She adds: "I wanted to focus specifically on the power of showing the best of yourself in a difficult scenario—and the effect this power can have on people, especially the younger generation. I was very inspired by Raheem's story and wanted to capture his spirit and energy in the film. He has a very natural sense of grace and optimism." 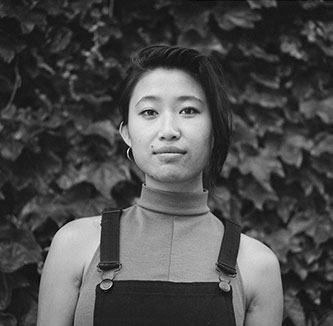 We spoke to Zhou further about the work.

Muse: How did you approach the Gillette assignment?

Zhou: Learning about Raheem's story regarding recent racist offenses at stadiums abroad, I was struck by how much work still needed to be done but also inspired by how he handled the situation and turned it into a way to be a role model for others. He carries himself with grace, positivity and humor despite what the world throws at him. I wanted to show how this type of energy can inspire a younger generation to not only to show the best of themselves, but also how to be role models themselves.

When and where did you shoot? Any big challenges?

We shot over three freezing days in Manchester back in November. Our challenges came from trying to fit a scale of our vision to the reality of our resources. We had an incredible amount of locations, cast, assets and storylines to capture. We managed to pull it off with our incredible local team.

Any funny moments or anecdotes to relate?

Raheem had never heard of "smiling with your eyes" before. This was something I had to show him—and I realized I probably just looked crazy doing it myself. I tried smiling with my "soul," which somehow worked a little better. This he got with no problem.

When people watch the ad, what do you hope their reaction will be?

Regardless of where they come from, I hope that they get a sense of optimism and reassurance for the younger generation, who are already equipped with the lessons we had to learn.

You grew up in Shanghai and Pennsylvania. How does that upbringing inform your style as a filmmaker?

I grew up between Shanghai and North Philadelphia, and then later the suburbs. I am a first-generation immigrant and remember distinctly the feeling of not knowing who I was, as it always seemed to shift depending on where I was. This had taught me as a filmmaker what it takes to adapt in any world I'm thrown in—and how to have a keen eye on culture and how it shapes [subjects' lives]. I am always seeking a voice that embraces this contradictory, eclectic world.

You started as a kid making short animated films. Can you tell us about that?

I only had a photo camera and pen and paper growing up, and I was hungry to make films any way I could. I got accepted into film school with this film about paper boats trying to make it outside for the storm. I spent about a week hand making about 1,000 paper boats while watching movies.

Your short "How to Be a Black Panther" from 2014 was a big breakthrough, yes?

It was my thesis film. I wanted to make a film about the loneliness of being Asian American in the suburbs, and how this young Asian character sought refuge in a black American family—only to find a dead end. I was interested in writing something that felt true to my feelings growing up as an American, trying to really understand what that meant to me, because despite my status, it was never easy feeling like I "belonged."

You've done a lot of cinematography for diverse artists and brands; the Nike vogue ad put you on the map as a commercial director. Do you seek out those kinds of assignments that are more socially attuned, progressive, deeper than average ads?

I think progression needs to happen naturally and authentically, and I don't think brands should approach work or art as a political agenda or seek change through the work. For me, films are meant to listen. If films are to speak, they have to speak from a very personal, authentic place. They need to hire the right people [to make them] who are able to speak authentically. Change will happen once we capture the attention of people's hearts and minds, and that takes courage, vulnerability and time.

I had written the Nike ad a year prior, and created it as spec, because I loved voguing so much and it was something I knew would be beautiful and powerful. I approach all my work this way. And if it happens to feel "diverse" or "progressive," that is really up to others to decide.