Nike's Colin Kaepernick Ad Is Brand Purpose at Its Best

A brave move, full of heart, at just the right moment

Nike's new Colin Kaepernick ad, unveiled Monday, is that rare piece of advertising that embodies both the endorser's and the brand's creed simultaneously—in two perfectly distilled sentences by Wieden + Kennedy.

"Believe in something. Even if it means sacrificing everything" refers, of course, to the former NFL quarterback's decision to kneel during the national anthem as a way to protest racial injustice—a move that may have cost him his career. It also reflects, to a lesser but still important degree, Nike's own bravery in creating the ad. For while the brand may not lose everything for supporting a controversial figure who doesn't even play pro sports anymore, it could lose plenty, as evidenced by the strongly negative reaction from some observers just in the first few hours since the ad's release. 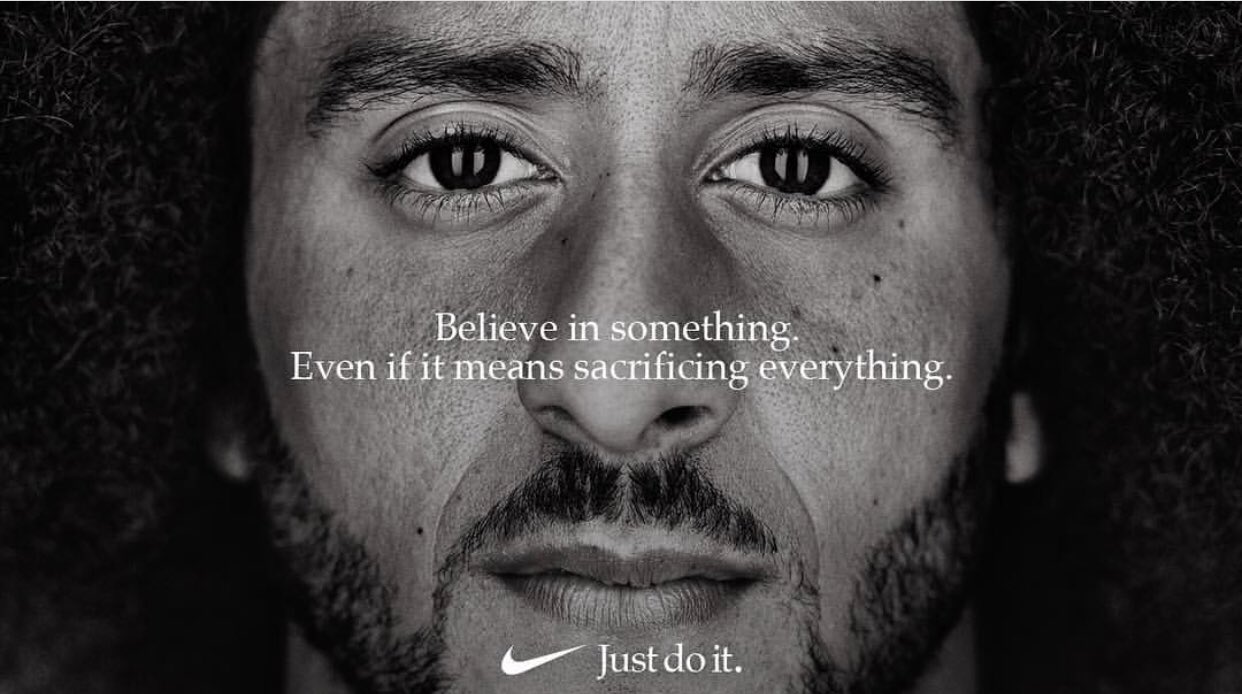 The ad, posted to Kaepernick's Twitter account, is exactly what brand purpose is supposed to be—a company taking a stand because it believes in it, even if it's unpopular among many of the people who buy its stuff. And not just on any issue—surely the key issue in America today, and for generations past, one that drills down to the troubled core of the American experience, and into which Trump himself has waded awkwardly, raising the stakes that much more.

Most brands would tremble at the very thought of embracing Kaepernick. Instead, Nike goes the distance with him. As the AP reported, the brand will feature Kaepernick on a number of platforms—billboards, TV, online ads—and create an apparel line for him, and contribute to his Know Your Rights charity. The deal puts Kaepernick in "the top bracket" of NFL players signed with Nike, the AP said. That's a remarkable commitment to a player who hasn't taken an NFL snap since 2016 (and hasn't been in any Nike ads for two years).

"We believe Colin is one of the most inspirational athletes of this generation, who has leveraged the power of sport to help move the world forward," Gino Fisanotti, Nike's vice president of brand for North America, told ESPN.

That's purpose in a nutshell—a global brand using its creativity and reach to give a powerful platform to a divisive voice it believes in, returning him to instant relevance and impact well beyond the sport.

Believe in something, even if it means sacrificing everything. #JustDoIt pic.twitter.com/SRWkMIDdaO

Why wait to feature Kaepernick in this way? To allow him to be a face—perhaps, in the end, the face—of the 30th anniversary of "Just Do It," of which the new ad is a part. Indeed, a number of top athletes—Odell Beckham Jr., Shaquem Griffin, Lacey Baker, Serena Williams—have posted their own new Nike ads in social media in recent days. But it's telling that the biggest of them all, LeBron James, didn't post his own ad tonight on Instagram. He posted Kaepernick's ad. Because it's bigger than sports.

In supporting him, Nike—in a perfect alignment of brand, endorser and the times in which we live—signals its purpose is bigger than sports, too. Whatever the collateral damage here, that's the kind of vision that builds brands today. My guess—cut socks aside—is it will cement loyalty for Nike, and help it sell a lot more stuff.