Inside the dazzling work of Clio Sports' Team of the Year

As lead marketer of the Philadelphia 76ers for the past five years, Katie O'Reilly strove to weave the team's storied past into the city's evolving landscape in ways that would delight and inspire fans old and new.

"Our goal was to bring the history of this organization back to life, but we wanted to be effortlessly cool," O'Reilly, who was raised just outside the city, tells Muse. "When I was growing up, Philadelphia was a different place—more provincial. Now, we're going through this renaissance: art, food, culture, fashion, all this wonderful stuff. We asked ourselves: 'How can we capture that and be the team for the new Philadelphia?' "

This approach resonated in a big way, as the franchise extended its sellout streak at the Wells Fargo Center to 124 games and topped the NBA in attendance and ticket sales this past season. What's more, the 76ers ranked as the only big-four Philly team (covering the NFL, NBA, MLB and NHL) to grow its fanbase nationally over the past two years, per YouGov.

Promoted to chief revenue officer last month, O'Reilly's marketing playbook generated multiple winners at the 2020 Clio Sports Awards, which were announced this week. The team scored two Silver and two Bronze Clios for its Classic Edition uniforms and Phila Unite Custom Jordan 1 sneakers, and a Bronze for a glitzy "Crossover Art Exhibition." As a result, the 76ers have been been named Team of the Year by Clio Sports for 2020. 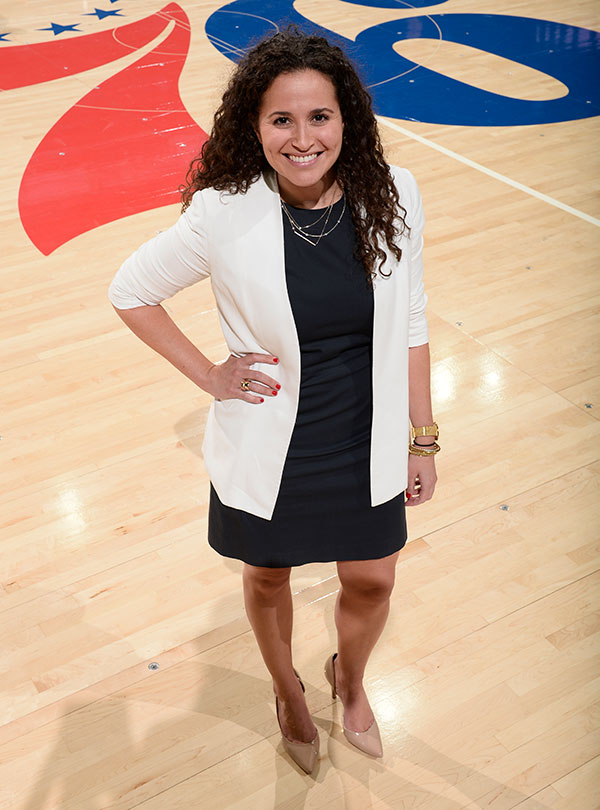 Below, in a conversation edited and condensed for clarity, O'Reilly explains the inside moves of her cultural full-court press:

Katie O'Reilly: Each year, we have the opportunity to have a "Classic Edition"—this is where you go into your archives and bring back to a uniform from the past and tell stories around it. This particular uniform was one of our favorites. [Hall of Famer] Billy Cunningham wore it. The uniforms were only worn for half a season because in the '70s, the place that made them employed a woman who had to hand-sew that "Seventy Sixers" [lettering]. And they ran out of material. So, the team stopped wearing the uniforms. The uniform is awesome, some incredible legends wore it, and it tells this story about businesses in the city and how they supported the team. 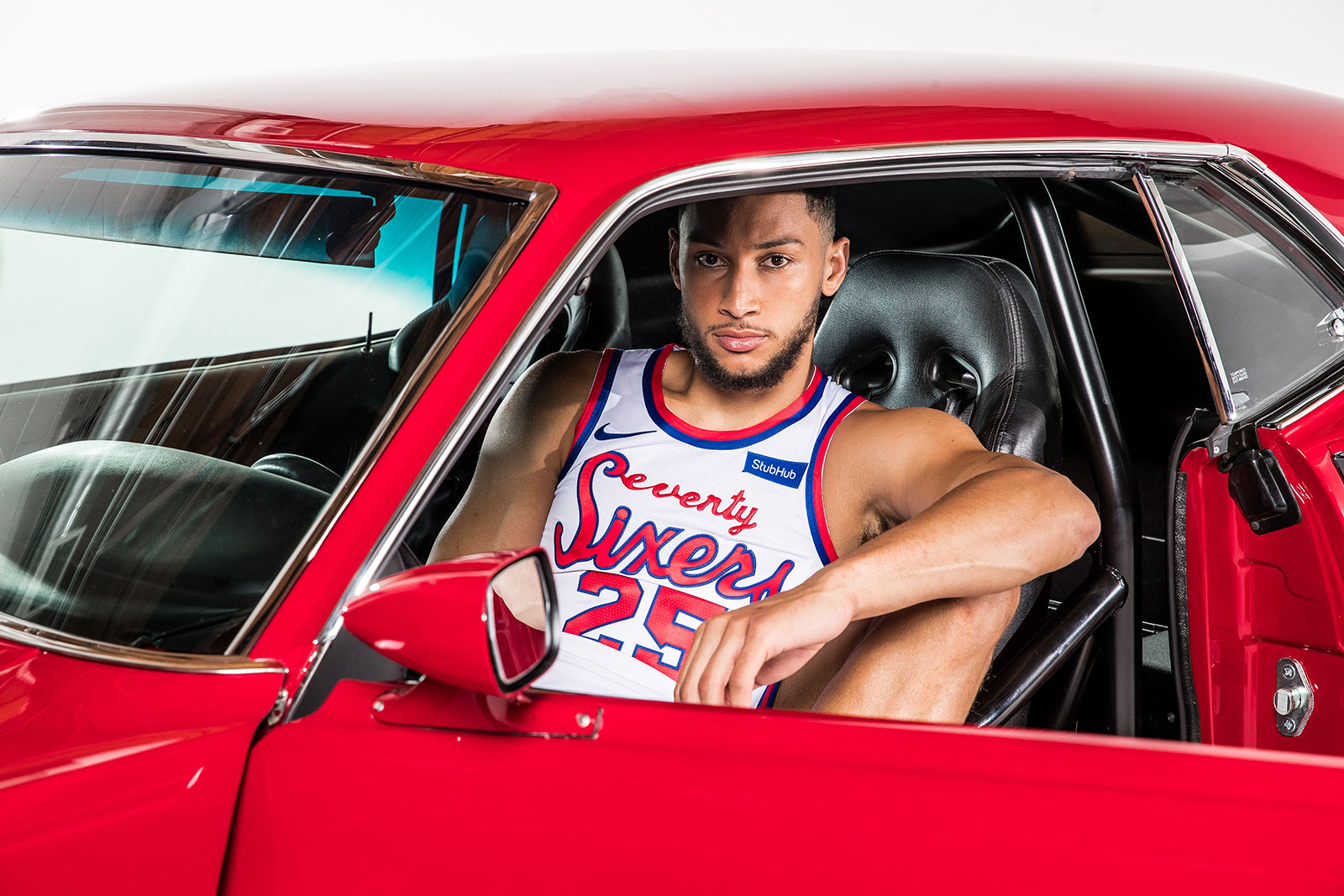 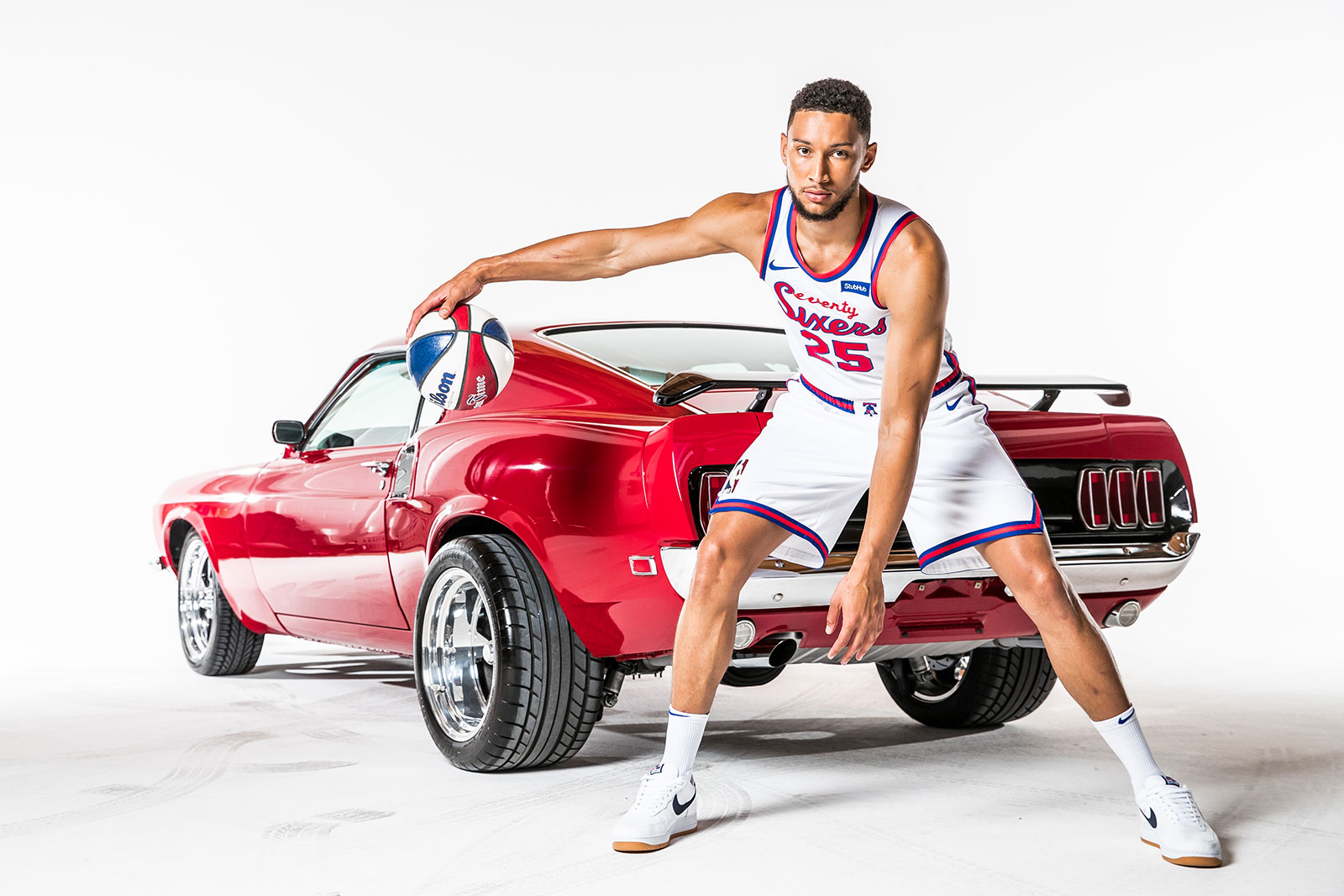 And you used social to communicate that story?

The campaign we did to launch it, which we worked on with [point guard] Ben Simmons and [power forward] Joel Embiid, harkened back to that '70s look and feel. We go all-in for our uniform campaigns. We wore it about eight to 10 times this season. We worked with our partner StubHub to bring that to life. On the nights we wore the uniform, the whole arena was a throwback. All the digital signage, all our communication that day are flipped and taken over. It all goes retro. The creative and graphics for this were nominated for a Mid-Atlantic Emmy.

You made another fashion statement with the ultra-limited-edition Phila Unite Custom Jordan 1 sneaker, from local designers at Ubiq. Nike, of course, was your main partner there. Tell us about that.

That was during our playoff campaign in 2019. We made 10 pairs, and Ben Simmons gave them to influencers—all celebrities or 76ers fans or people associated with Philadelphia. There was Kevin Hart getting a pair, and [Phillies slugger] Rhys Hoskins. Simmons gave them away on social media. For the last pair, we did a sweepstakes so our fans could get involved, too. It was our No. 1 sweepstakes ever. We got over 40,000 entries. It was crazy. 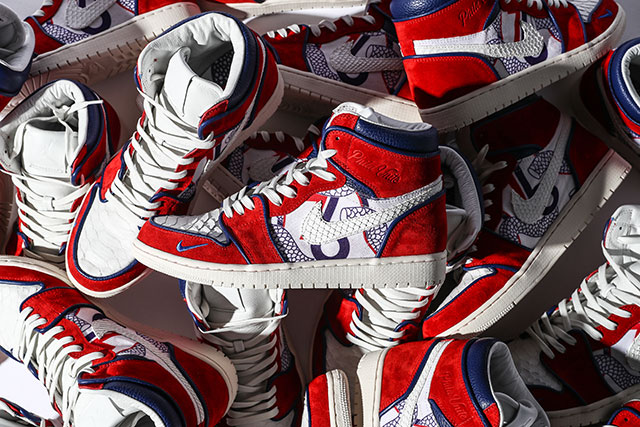 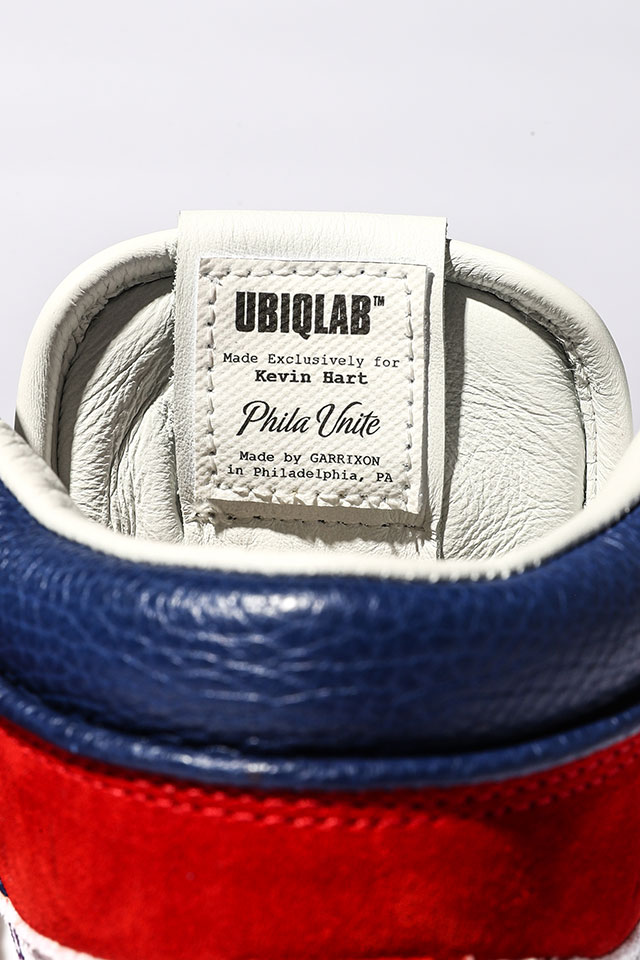 And this activity leveraged all your influencers?

We have what we call a "Circle of Stars," which is essentially our celebrity row. We give them gear and they post for us on social. [With the Jordan 1s] it all looked cool and effortless. Ben Simmons would gift [Eagles quarterback] Carson Wentz a pair of sneakers—but our brand team was crafting all the posts, taking all the photos, putting them in this awesome gift box sent to the influencers. All Kevin Hart had to do was copy, paste and post.

[In addition to the celebs] we also have our own micro-influencer program for the younger cool people who are watching TikTok and YouTube. It's been an important piece of our brand strategy. That is how we can capture this generation, and you get so much more bang for your buck [versus traditional commercials]. We have our own budding superstar in Christian Crosby. We work a lot with him. And of course, the players themselves have their social feeds.

You did an art exhibition last November, the "76ers Crossover," that introduced a special-edition uniform with guard Josh Richardson. So, you're targeting trendy young people, positioning the team at the intersection of basketball and pop culture?

This was a way to bring basketball into other sectors of the community—literally to cross over. We had a couple of partners on board: Red Bull and Reebok. We launched a four-day exhibit of artwork from fans around the world. We curated it ourselves. We had thousands of submissions and displayed more than 200 pieces. We held the exhibit at the Fitler Club, another partner of ours, a cool new Soho House-type place in Philly. All the art [paintings, photography, sculpture, digital pieces and mixed-media] was Sixers-based. It was auctioned off, with all proceeds going to our Sixers Youth Foundation. Offhand, I'd say we raised over $50,000. 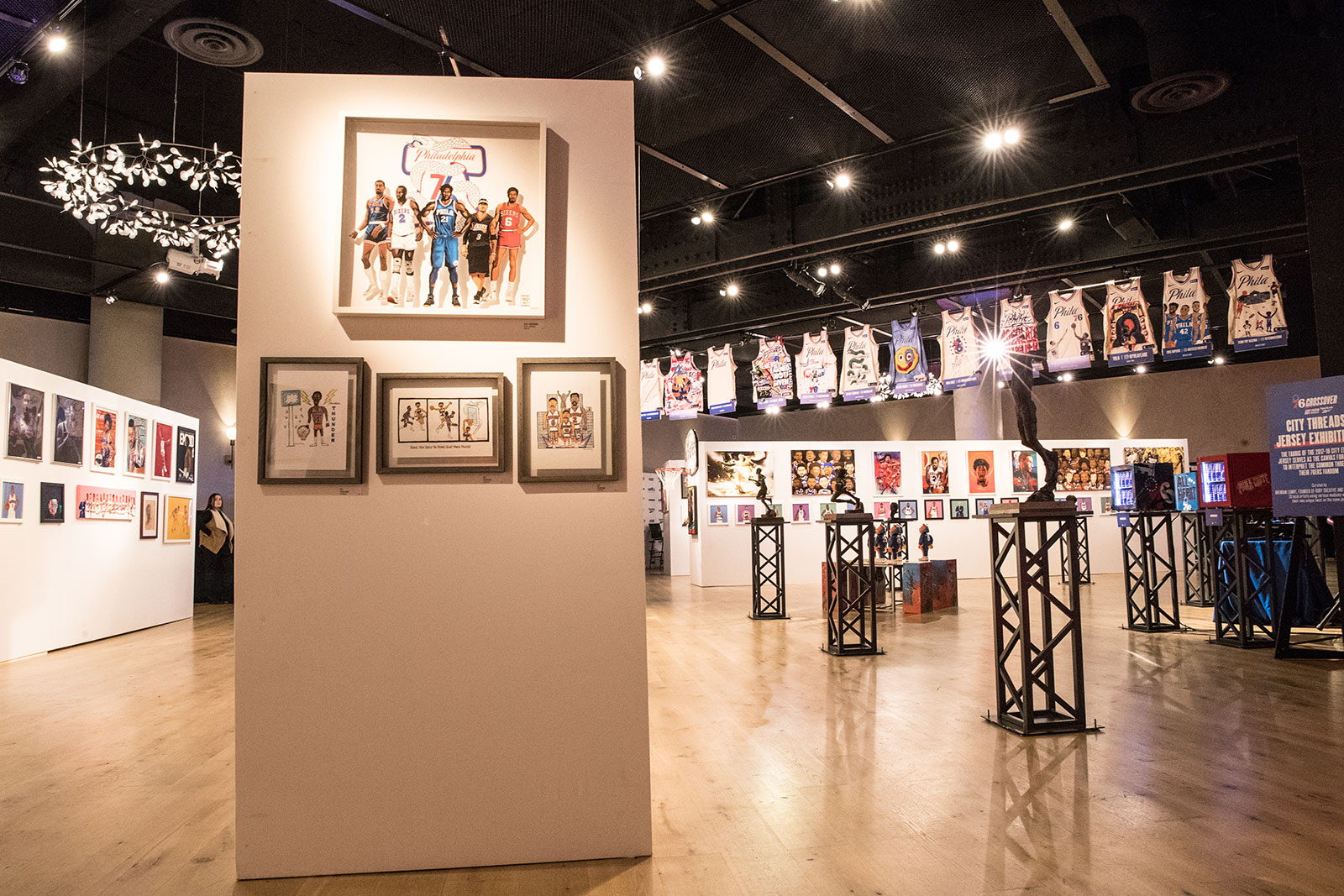 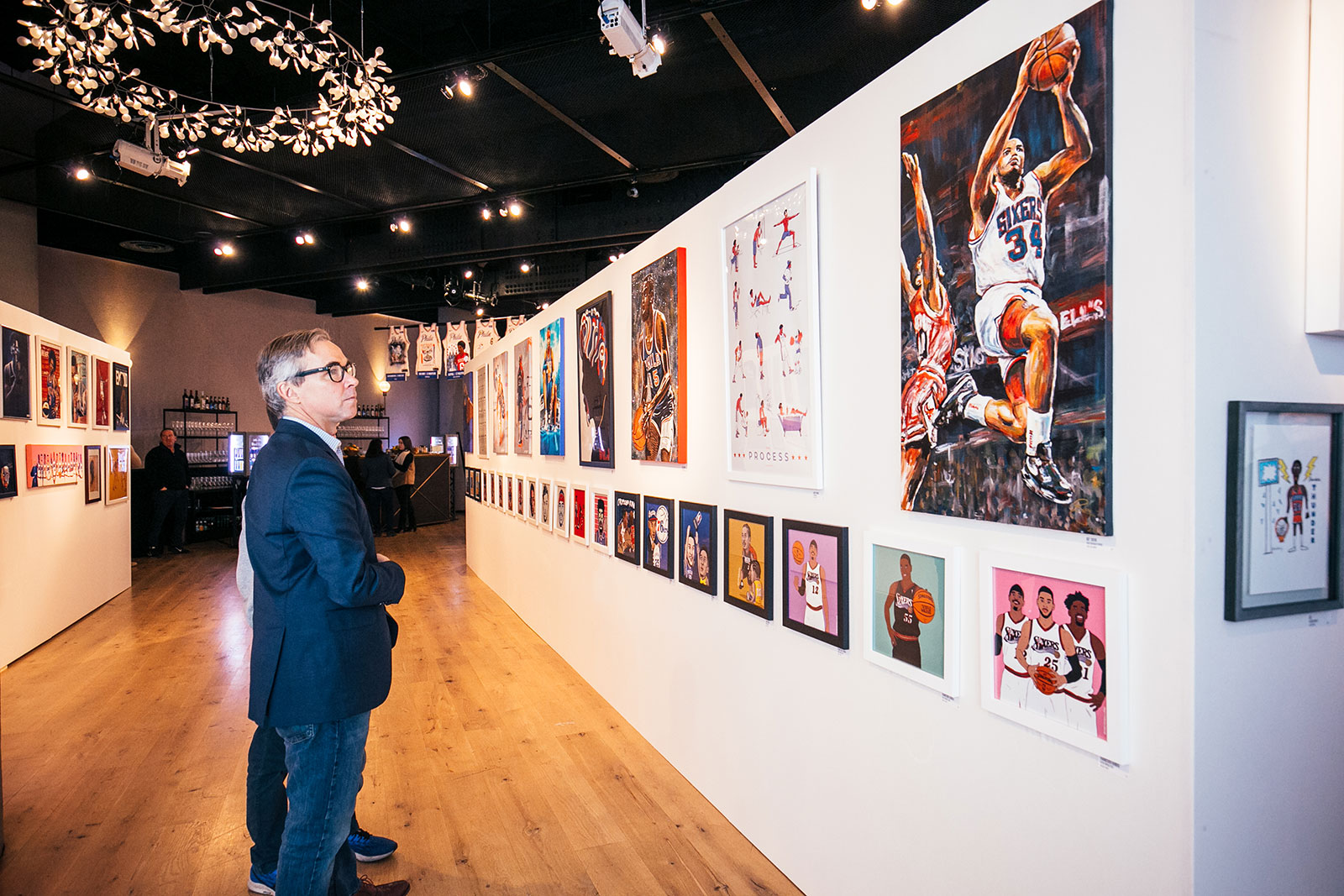 Any other recent work you're especially proud of?

One of my favorite ones that we did was called Summer 76. We were playing basketball in July in Orlando with no fans. It was just a very weird concept. In the summer, folks aren't used to barbecuing and hanging out at their pool and turning on basketball. We wanted to embed Sixers' basketball into summer. It was a way to get the excitement back before the playoffs. It was a feel-good awareness campaign with some awesome gear [plus digital activations, a podcast party and sweepstakes]. We've been very cognizant of event-focused ways to connect with our community. Given the environment [with Covid], we obviously couldn't do that. But I think this was still super successful, and it leveraged social media. 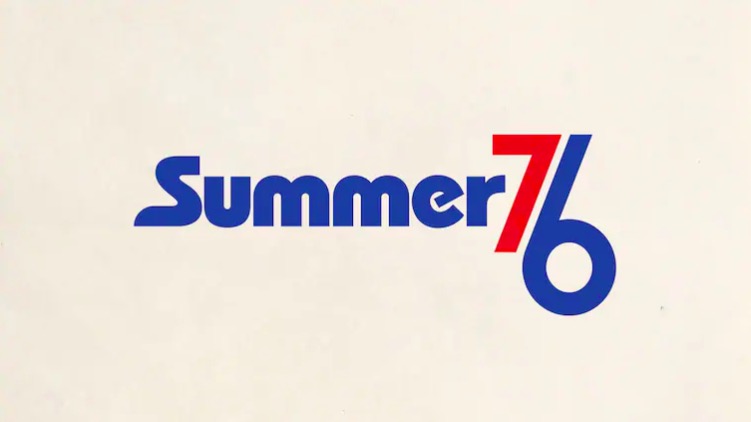 Also, we've had a number of uniform campaigns that I've been really proud of. [In 2018] it was our Rocky City Edition. This, to me, showed the power of our brand, the city, and leveraging partnerships. We designed the uniform to reflect Rocky's gray sweatsuit [from the 1976 Sylvester Stallone film shot in Philadelphia]. The team wore it the season that Creed II [a Rocky sequel] was coming out. We worked with MGM Studios on a launch. We had the movie's actors at games. This was all an amazing campaign with our partner StubHub—and this uniform spoke to Philly like nothing else has, given the ties to Rocky.

You're now chief revenue officer. Congrats! Will you still be involved in marketing?

So many people see the shift and it doesn't add up for them. But the way we structure our organization, first and foremost, is that no one is bigger than the brand. We're all selling. We're all marketing. We all understand the importance of collaborating across departments. When I started, my first role was launching the business development group. So, I started on the revenue side. It's almost like I'm coming full circle. I will not be involved as much anymore in the day-to-day. I'll still have my hand in certain things here and there. We've brought in Brittanie Boyd, who's been part of our HBSE family for years. [Harris Blitzer Sports and Entertainment owns the 76ers.] She's going to oversee the marketing group. She was on the partnership activation side, and now she'll do the marketing.

Was joining the Sixers organization in 2013 a dream come true?

Definitely! I had been in New York for about 10 years doing different things [with IMG, Signature Sports and the NBA]. I don't think I ever was like, "Oh, I've got to get back to Philly." But I'm a die-hard Philadelphia sports fan, four for four [she roots for the Eagles, Phillies and Flyers along with the 76ers]. I grew up here in the Allen Iverson era, so it's great to be able to come back and see it from the other side.

When you started, what was the first issue that you had to address?

The glaring challenge, and it's painful for me to say it: We had to overcome the Allen Iverson stigma. The Sixers are this incredible brand with a storied history. Championships, hall of famers—you name it. Yet, the brand was dormant. Allen Iverson is this global icon, and during his reign, he was bigger than the brand. We had this big challenge to simplify everything and bring it back to its core. It was like, "OK, we have to reestablish who we are and what this brand is in this city."

One of the first things I did when we took over—we kicked all our agencies to the curb and built an incredible in-house team. A mix of folks: some from Philadelphia, some not—some from sports backgrounds, some not. That diversity of thought drives us and makes us better.

Was that an economic decision, to move in-house?

We are control freaks. We are maniacal about our brand. We didn't want anyone else doing it. Frankly, you can't hire a New York agency to tell the story of a Philadelphia brand. I feel strongly about that. No one knows the city better than we do. We're fans, and the marketing reflects that.

Did you ever seriously play the game?

I grew up here and went to a summer clinic where Kobe Bryant was my coach. [Bryant grew up in the Philly area.] I think I was in seventh grade … he was in high school.

Did he teach you any lessons that stick with you today?

I don't know about that … I would say he made me a better basketball player. We knew he was going to be something special. He was the local star.

OK, now you play coach. What wisdom would you impart to a young marketer today.

First: No one is bigger than the brand. We use that mantra in our external campaigns, and we use it internally for our staff. That's our North Star. If we remember that, then we are always going to be on brand and run successful campaigns. It's not about one department. It's not about one player. It's not about one person. It's about the 76ers as a whole. Also: Keep an open mind. In sports especially, people think their careers have to progress in a linear manner. Like, if you start in ticket sales, you grow in ticket sales. Being open-minded to different opportunities has allowed me to understand the breadth of the business and to have roles that are more dynamic. So, don't say no to opportunities!