How SoFi Showed Off Its Incredible New L.A. Stadium, Even Though It's Still Closed to Fans

Rob Lowe and Danny Trejo do the honors

The timing of the Covid-19 pandemic wasn't great for anyone, but it was particularly galling for SoFi.

Last fall, the personal finance company announced its had purchased the naming rights—at a reported cost of more than $30 million a year over 20 years—to the stunning $5 billion stadium being built in Los Angeles for the Rams and Chargers of the NFL. The high-tech masterpiece of a facility, named SoFi Stadium, opened this fall. But as yet, no fans have been allowed in because of Covid.

This was a major headache for SoFi. The company is being name-checked during NFL telecasts this fall, but that was only part of the value of the naming-rights deal. SoFi had planned myriad in-person SoFi-member experiences at the stadium, but all of those, of course, have been put on hold.

So, how did SoFi pivot? By enlisting a couple of celebs, and an unsuspecting SoFi member, for an entertaining content piece—which won't totally replace what was lost, but is a nice creative solution to the problem at hand.

The three-minute-plus video was created in-house, with Caveat's Steve Mapp directing. It weaves in many of the amenities SoFi members will eventually be able to enjoy at the stadium (express entry lanes, 10 percent cash back when using your SoFi money on merchandise and concessions, access to a SoFi Member Lounge, and more) while still making room for fun banter and great shots of the high-tech stadium.

SoFi CMO Lauren Stafford Webb tells Muse that centering the video around a SoFi member, Precious Ares, was a no-brainer. "At SoFi, we truly do put our members' interests first, and they're really the heart of everything we do," she says. "We wanted to emphasize that as a SoFi member you're really going to be the true VIP at SoFi Stadium. It's intended to be a true celebration of the member community we are building at SoFi and the incredible experiences that we offer our members."

"This content was born out of a pivot, for sure," adds Jean-Michel Hoffman, SoFi's head of brand strategy and marketing. "We had been planning all these experiential events up until really really close to the stadium launch. We saw a lot of the chatter around just the stadium from Rams fans, from our members, that they were really excited in seeing the development and that they were getting really disappointed that they weren't going to be able to get the insider view on the stadium. That was a kernel of the strategy, and the brief here was to just provide that insider view."

Jonathan Woytek, executive creative director at SoFi, and his team came up with the idea of having Danny Trejo, a big Rams fan, show a SoFi member around the stadium. But that alone felt a little flat—they needed a foil for Danny to play off.

"I'm not sure who brought up the infamous tweet of Rob Lowe on the sidelines of a Packers and 49ers playoff game with the hat that just had the NFL logo go on it," Woytek says. "He got a bunch of grief about that on Twitter, and he was a good sport about it. He's not afraid to be self-deprecating. We love that piece of his personality. So approached him with the outline of the story, and he was totally game." 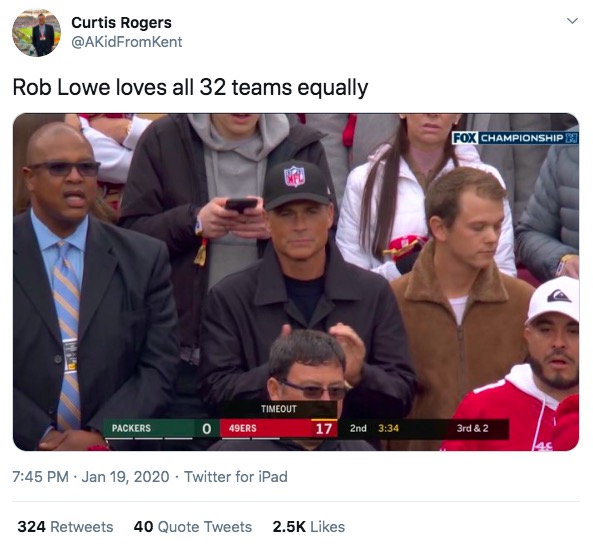 Lowe and Trejo are both easygoing and happily let Precious take much of the spotlight. "That's one of the things we've been trying to balance as we think about working with celebrities," says Hoffman. "Celebrities come with their own personalities, but being kind and caring for our members is something we really prioritize. And Rob was one 100 percent that. And Danny was, too. When he said, 'Hi, Precious,' at the beginning of the video, that was his genuine self coming out."

The film was shot about a month ago under strict Covid protocols. Despite the disappointment of the pandemic keeping fans away, Webb says SoFi commitment to sports, and the NFL, is unwavering.

"We built an incredible suite of financial products. And now, our focus as a company is really about building awareness, trust, and consideration for our brand," she says. "Sports has and continues to be a critical part of our marketing strategy. Primetime NFL games average anywhere from 15 to 20 million unduplicated viewers in a single broadcast. With the stadium, we get four to six primetime games per year, so that's a huge part of the value. And while fans can't come yet, we also know that a huge part of the value is that SoFi Stadium can host up to 100,000 fans in the stands at events that are going to be happening year-round. The stadium is slated to host Super Bowl 2022, World Cup 2026, the Opening and Closing Ceremonies of the Olympics in 2028. So we look forward to the event aspect of SoFi stadium as well."

Cast
Precious: Herself
Rob Lowe: Himself
Danny Trejo: Himself
Rampage: Himself