13 years later, fans put a face to the famous melody

When NBC aired its first-ever episode of Sunday Night Football, on Aug. 6, 2006, it was the music of Joan Jett that powered the promos.

The melody of Jett's 1988 hit "I Hate Myself for Loving You" was used for the show's musical open—with rewritten lyrics that would themselves become famous. Indeed, "Waiting All Day for Sunday Night" has since become an anthem in its own right.

For this year's 100th anniversary of the NFL, NBC's producers wanted to return to the classic "Waiting All Day for Sunday Night." And now, for the first time, Jett herself has been involved. The 61-year-old music legend worked with her own band, and with Underwood, on a rocking new version of the tune, and even—somewhat surprisingly—agreed to appear on camera with Underwood for the open.

Muse spoke with Kenny Laguna—Jett's longtime producer, songwriting partner and partner in their label, Blackheart Records—about her longtime association with SNF, working with Underwood on the new version of the song, and what it means to Joan to have been awarded this year's Clio Music Lifetime Achievement Award.

Muse: Hard to believe Sunday Night Football started 13 years ago. How did Joan get involved at the beginning?

Kenny Laguna: Yes, 13 years. Can you believe it? The producer of Sunday Night Football is Fred Gaudelli. We've known Fred for a long time. He was behind the X Games, which in our world was a pretty cool thing. We did two of the first four theme songs for the X Games. Joan was very popular in extreme sports—to this day, she's popular with skateboarders. So that was the beginning.

When Fred started doing Sunday Night Football on NBC, he came to our office with the idea of using the melody of "I Hate Myself for Loving You." Now, Joan's a purist, so originally she was like, "I don't know about that. That seems a little strange." But I'm like, "Joanie, listen to me. This is football. NBC prime time. There's nothing more American than what they're offering you. It's a no-brainer. You've got to do it." Fred actually offered Joan to be on television, but that's not really a Joanie thing. To me, she's become a regular celebrity, but in her head she's still a punk rocker with the Germs and the Sex Pistols. The thought of being on a network television open—it just didn't fit in her head.

Pink did the first version of the song, right?

Pink did the first year. Then they got Faith Hill. That was a thrill for me because I'm a closet country fan anyway, and I've always felt like some of our songs are country-type songs. There's a version of "Bad Reputation" they did in Nashville; it does sound like a country song when it's done by country people. And then they brought in Carrie Underwood.

It's interesting that Joan, known as a punk rocker, would become the anchor for this really patriotic, sports-focused program.

There's another side to Joan. First of all, Joan quietly was the noncombatant who was in more war zones than anybody else for 15 years. They gave us a citation for that in the early 2000s, but she doesn't do publicity around it. So there's that side to Joan. Also, she's your average sports fan. She sang the National Anthem when Cal Ripken tied Lou Gehrig's record [for most consecutive Major League Baseball games played]. She doesn't make a big fuss about things like that. This year, Nike used "Bad Reputation" as the theme for their Women's World Cup thing. She's very American. I liken it to Elvis when he went into the service. They're American kids. You don't associate that because the punk movement maybe wasn't looked at that way. But Joanie is an all-American, and her songs are, too.

They're not necessarily anti-establishment.

Exactly. She is political in her own way, but she's a Yankee Doodle. And I think that's consistent.

So, this year, Joan finally agreed to be on camera for the Sunday Night Football video.

They didn't use our song for three years. And then Fred called us this year and said they want to bring it back. Of course I loved it, and Joan was cool with it. And then Carrie Underwood apparently thought it'd be cool to bring Joanie in. We actually used our band. We were just feeling it out and working with one of [Underwood's] producers, Chris DeStefano, who's a big country producer and did some of her No. 1 records. We're working with him and talking it through. We're co-producing without ever meeting. Everybody was loving what we were doing. So we had this track and we shared it with Carrie, with the publicity people and with the agency, CAA.

Had Joan and Carrie met before?

They met at one of the Hall of Fame inductions. Carrie was part of the Linda Ronstadt tribute, and Joan was there for Nirvana. They met for a second, but we always heard really nice things about her. And now that we've met her, she's wonderful and really a hard worker and really talented. We had nothing but good vibes with her.

She seems to be a legitimate kind of fan of Joan's, and everything Joan stands for.

We never talked to her about it, but I heard she's an animal rights advocate, which Joan is. So we're just hearing great things. And then when we met her, I mean, her work ethic is scary. Oh my God. She was on tour when we were doing this. We did one other thing with her that was on ABC—a fundraiser for musical education in schools. So one night Carrie is headlining to 60,000 people. Then she's in Nashville, and she invites Joan to do a medley of her hits with her band. Then she's in rehearsal for Sunday Night Football—and she has to do like 18 versions of the song because each one is custom-made for that week's game.

Right, because they mention the teams in the lyrics.

Exactly. So she does all that, and then she goes and does CMA Fest. And then she's back on the road to do the tour. I'm like, "Oh, my God." And her voice, it just holds up. It's absolutely scary.

So, Fred asks Joan if she wants to be on camera this time?

It's great, too, because now people realize that it's her song, right?

Yeah. Well, I like that part of it a lot. I think, at this stage of her career, her brand, to me, is established. We've been at it for 40 years. Nobody's going to think she's anything other than what she is. And she's a very pure artist. She walks it like she talks it.

Did they have a good time shooting the video together? That must have been a fun day.

Carrie had a smile on her face all the time. I can't tell you what's inside. I think part of Joan was having a great time. The other part was going, "What am I doing here?" [laughs]

It's great to see her back on TV, though.

Yeah, it is. I kept saying, "It's a new world." I mean, we're doing OK—but doing OK today would have been a disgrace 25 years ago. No one's really selling records anymore. We don't even get the SoundScan. Now, it's streaming and we'll see how it goes. We have a couple of songs that are iconic, so we should do OK. But we have our own label, right? So we gambled. We didn't sell that out a long time ago. We'll see how it all works out. It's a new world. I feel like I'm in the stagecoach business.

Does that raise the pressure to explore opportunities beyond making music and touring? Like commercials and promos?

Thankfully, we're selling live tickets. But that's something you can't do forever. When we had a catalog that was selling all the time, that was kind of forever. But we don't know yet. It's the Wild West. We do get a lot of licensing, so we make some money that way. But we got in under the wire. If you look at rock 'n' roll—I'm not sure I know any 20-year-old rock 'n' roll bands that are really killing it. Taylor Swift is showing big numbers, but there aren't that many. I don't even know if she's selling records now. I mean, I'm sure her streaming is through the roof, but it's a new world. It's hard to believe, right? 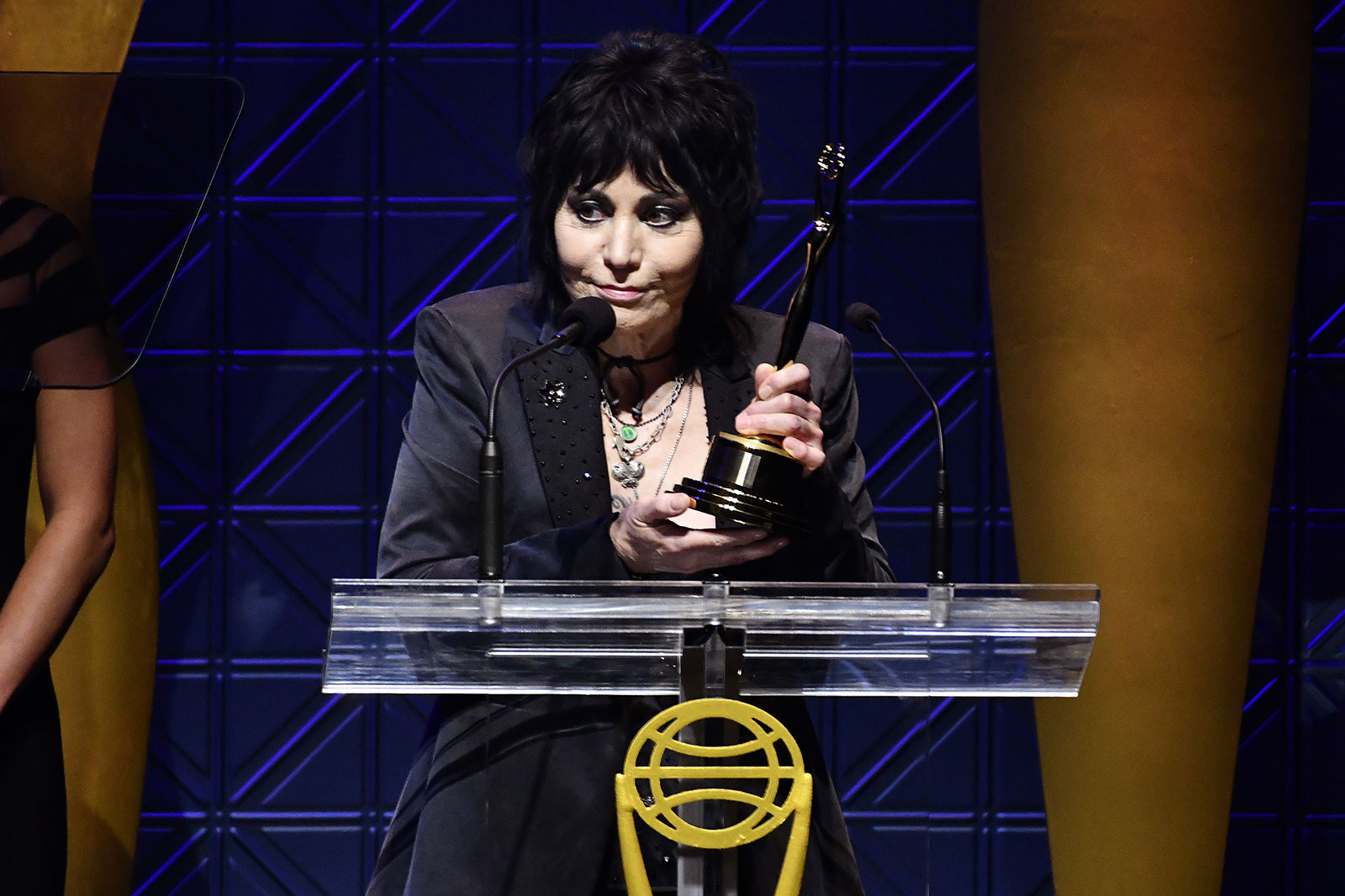 Joan recently accepted the Clio Music Lifetime Achievement Award. Can you talk about what an honor like that means to her at this stage of her career?

Well, she always says she didn't get into this business to get awards. We both got inducted into the Rock & Roll Hall of Fame. That meant more to me than I expected. I always thought it would be great, but it means a lot. We did get one Grammy nomination, no Oscars. And the Clio Award means a lot. It's great. Really great. It's nice to be recognized.