How Global Athletes Are Creating Their Own 'New Normal' in Social

With sports on hold, there are new rules of engagement

Another weekend without sport comes and goes. As a summer without live action approaches, the buzz of #GameDay is barely even a faint whirring in the distance.

There's no denying times are tough for sports fans, and no amount of nostalgic replays or quizzes can fill that gap. But global sport's biggest brands, leagues and athletes are adapting to the "new normal," despite the goal posts being moved like never before.

And we're witnessing a step change in the way athletes approach social media—a shift that could have a lasting impact long after things return to normality: the rise of athletes as media, and a deeper, more meaningful connection between stars and fans.

The gap between fans and athletes is shrinking. Sport's biggest names are acutely aware of the value and power of access—and we're seeing a pivot into content that combines not just their star power but their sizeable platforms to deliver purposeful storytelling in more creative and compelling ways.

Ironically, social distancing and isolation means our favorite athletes are stripped of the one thing that has probably defined their characters for most of their lives—their ability to perform and showcase their talents on the field or court.

But we're no longer following them just for their athleticism. Sports stars are being forced to think more creatively about how to approach their social media.

Take Stephen Curry, of the Golden State Warriors. The NBA star boasts a truly huge platform—some 30.2 million followers at the last count—and has been one example of how a truly international athlete can adapt to a global crisis.

Curry was one of many NBA athletes to tweak their content in light of the suspension of the season, pivoting away from his usual content to host a live Q&A on his personal account with infectious diseases expert Dr. Anthony Fauci, to help share important messaging around the Covid-19 outbreak.

The New York Times called it "one of the most concise and accessible public education efforts available." Curry led the interview, posing fans' questions from his home—and Barack Obama left a hand-waving emoji in the comments.

These are significant moments in terms of athletes becoming media. Not only are the world's biggest sports stars far more willing to get involved in community outreach and society engagement, they're not just participating in these often challenging conversations—they're driving them on their own channels.

The outcome is genuine engagement and relevance that many global brands could only dream of.

Of course, established international athletes like Curry and Rapinoe just get social. Aside from being elite sportspeople, they're natural marketers, have built global brands and significant platforms, and understand that fandom and engagement translate into commercial value.

But what about the less social-savvy athletes? Those competing in challenger sports, or the rising stars of the future? How are they embracing the "new normal"?

Well, we're seeing a lot of experimentation across the sports world. Modern sports fans want and expect more access than ever before, and authenticity wins over everything when it comes to making compelling social media content.

In times like these, the true value of content isn't in how it looks, but how it makes you feel. It's about bringing people together, and harnessing the power of community.

That means far more opportunities to engage on different levels—and a chance for athletes to get creative, and establish their own personality and platform. Athletes are rising to the challenge of building community and keeping the conversation going, even without their team's PR or digital team to hide behind.

We've watched Real Madrid goalkeeper Thibaut Courtois stream his live racing gaming to Twitch, and even sign up to compete in the Virtual F1 Grand Prix.

We've gone behind the scenes of U.S. ski star Mikaela Shiffrin's guitar lessons as she serenades fans on Instagram.

And we've grimaced at the World's Strongest Man Hafthor Bjornsson creatively bench pressing his other half due to a lack of gym facilities.

There's never been a better time for athletes to not only join the conversation, but lead it. And it's never been more important—no, necessary—to show fans there's a human behind the athlete.

What does this mean for the future? Once the athletes have sport to focus on again, will we see a return to highlight videos and press photos? I'd suggest the opposite. We're building a new generation of social-savvy athletes who are as adept as creating content on selfie mode as they as at creating content on the field. 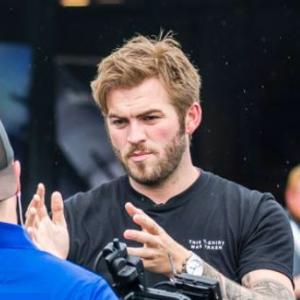 Jonno Turner
Jonno Turner is a storyteller in global sport and sustainability, and was honored on Muse's 2019 Clio Creators list.
More from Jonno Turner