How Callaway Golf Got So Good at Long-Form Original Content

When it comes to sports marketing mantras, "Just Do It" is already taken. So Rebecca Rosoff, co-founder and CEO of Los Angeles boutique agency The Kimba Group, vows to "Just Do It Different" instead.

"Whatever it is, whatever the creative challenge, don't focus on making it better than someone or something else. Focus on difference," she says. "That's the currency we try to trade in."

Case in point: the latest installments of the agency's "Callaway Originals" video series, which are running across the golf equipment company's digital and social channels, OTT app and Amazon Prime. Produced by Vice Media and running under the new "Forefront" banner, these Wes Anderson-esque spots play out more like segments of a sports magazine show than commercials.

Sun-kissed product shots and sales pitches remain in the clubhouse. These are replaced by quirky, informative five-minute vignettes covering South Korea's obsession with "screen golf," how to play 18 holes on a 9-hole course, and pushing the boundaries of golf-tech with Callaway's R&D brainiacs.

Directed by Jack Turits, the series targets both avid golfers and casual fans with a breezy style, strong storytelling and liberal dashes of humor.

"Making the stories entertaining and accessible so they appealed to a broad audience was key," says Scott Goryl, the brand's director of marketing communications and content. "We wanted golfers and non-golfers alike to be excited about some of the innovations happening in the game."

Kimba Group, launched in 2013 by Rosoff and co-founder/strategy chief Michael Chiavetta, has crafted "Callaway Originals" for four years. All told, the series has generated impressive numbers for a golf-related campaign, drawing 85 million views across all platforms, with engagement eight times greater than the average time spent on the brand's website. (Callaway enjoyed record 2018 net sales of $1.24 billion, an improvement of 20 percent, and also reported net sales of $1.39 billion—another record—through the first nine months of this year.)

Rosoff calls the latest films "an ambitious undertaking. For the episode we shot in Korea, handling the translations and sensitivity to cultural nuances in order to authentically capture the immensity of the screen-golf revolution was a fun challenge. Then add to that Jack Turits' application of irreverent tone and character-centered shoebox-set motif—and you have a true production Rubik's Cube. I think we nailed it, and set a pretty high bar." 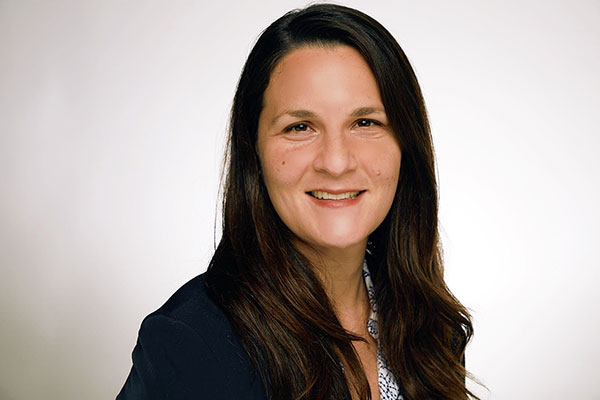 In our conversation below, which has been edited and condensed, she delves deeper into Callaway's kicky content and dishes (just a little) on upcoming content initiatives with Steph Curry.

Muse: How did you pick the subject matter for the new spots?

Rebecca Rosoff: We wanted to make Callaway's very complicated A.I. and product development story more accessible, while also bringing to the surface some exciting trends in the sport. There was a lot of meticulous research, casting—this is such a character-dependent format—and vetting that went into the subject-matter selection. We wanted all three subjects to have a technology angle, shepherded by down-to-earth humans. We were intrigued by that duality. Everyone is so scared of being made redundant by A.I. and robots, and it's nice to remember that human beings are still at the center of pushing technology forward.

What were the biggest challenges?

Wes Anderson has popularized this irreverent approach to filmmaking in America, but when we were working with Callaway's Korean team to help with logistics, we had to clearly delineate intentions. We were never aiming to jest or poke fun, but always to present subject matter in its most striking and colorful form. We wanted to accentuate characters and details, and exaggerate moments to create an entire world in a single beautifully framed shot.

Callaway is committed to accessibility and inclusion in a traditionally less accessible sport. That's what drew us as an agency to the brand to begin with. Yes, the avid golf equipment junkie will always be the core customer, but the game is universal in a way that outsiders and newcomers may not expect. The entertainment industry is finally catching on—representation is essential from a sociological standpoint, and that [approach] can also be fruitful for brands looking to grow their audience.

Callaway just finalized a three-year content deal with Steph Curry. How does that play into what you've been doing for the brand?

Steph is an avid golfer. He's been a Callaway player for a while, but discussions of something more formal really started around Steph's commitment to fund the first Division 1 golf program at Howard University. Callaway stepped up as the provider of all of Howard's equipment. I believe that Steph was drawn to the likemindedness Callaway has exhibited with their marketing work over the past five years in growing the game of golf and drawing in new generations and underserved communities. That's why Callaway is partnering on storytelling efforts as well as providing equipment.

Is there an ETA for when the first work with Steph will drop?

We had our first development meeting [on Nov. 19] with their team. Work probably would be released in the middle or fall of next year, but I don't want to make promises. It is multi-year, so something will be released in 2020 and 2021 for sure.

You had an unexpected golfer—rap artist Scarface—in the long-form "Golf Lives," which was your breakthrough for Callaway. How did that come about?

We wanted to have an unexpected narrator who was obsessed with golf give audiences a first-person guide through Callaway's HQ. Vice, with their music roots, brought a lot of great options to the table for who that might be. I remember us all sitting in the boardroom reviewing about 20 different potential subjects, including the late [rapper/producer] Mac Miller—and [former Callaway svp of marketing] Harry Arnett just said, "Scarface! It's gotta be Scarface!" That was it. Great instinct.

That work was hugely popular, especially for the golf niche, yes?

For the three-part series featuring Scarface and [former Houston Texans star running back] Arian Foster, we had 10.5 million views [across all platforms] within the first few months of release. View rates were four times the industry benchmark for sports. The outpouring of positive feedback on social media exceeded our expectations, for sure.

Ogio is an amazing brand with incredible products serving polar opposite sides of the athletic spectrum—incredible golf bags, and huge popularity and use within action sports. We have been tasked with expanding the brand to reach on-the-go, urban-dwelling professionals. The next collection of bags OGIO launches will be all about mobiltity for the young professional. There are lots of disruptive upstarts in the backpack and travel-bag space, not to mention the behemoths like Nike and Adidas, so bold marketing at cost-conscious rates is essential. Our "Live Your Go" docu-series and campaign for Ogio is all about reaching that motivated and creative professional, and we did that through inclusion. Three of our four influencers were people of color.

Your work for Easton Baseball feels similar to some of the Callaway stuff, as it takes a sport some consider boring and gives it a fresh sheen…

Ball and stick sports. Yes. Striking similarities. The NBA, NFL and soccer really hold the cool cards at the sports table, for a variety of reasons. This leaves a lot of areas for potential with sports like golf, baseball and hockey. We love working through those types of challenges and being in the position to rewrite the marketing rules. Or just write them for the first time. Digital and social is a limitless place to play.

Random question: If Major League Baseball came to you and asked you to revitalize the sport's image for a new generation, what would your strategy be?

What's funny is that Easton has asked us to do that. To reach Gen Z, there has to be a strong UGC and social-media-creator component. I don't want to reveal our secrets, because we have some stuff coming up for 2020, but we've been working with a group of the most innovative and engaging baseball creators across social. They are the new "television networks" for Gen Z. Gen Zers are cord never, not cord cutters. Also, there is always a place for high-quality product storytelling, so delivering a mix of brand and product content is key.

Did you have an advertising mentor?

I wish I had a mentor! To be honest, I had anti-mentors in advertising, a lot of people who showed me what I wasn't interested in being or becoming. The industry, audiences, tech and media are transforming at such light speed that it is nearly impossible to compare what advertising was when people were limited to three mediums [print, OOH and broadcast] to what it is and can be now. But I'm definitely still taking applications for a mentor. The day I stop being teachable is the day I should resign from the field.

Do you play spots—or did you in high school or college?

I played basketball and volleyball in junior high, but then dove deep into music, art and creative writing throughout college and my early career at iHeartRadio. I have huge sports fanatics in my family, but I think it's my outsiderness that allows me to bring a fresh eye to sports marketing. I'm pulling on inspiration from other fields, and that's what is exciting.

Any sports-themed ads from the past or present that you love—that inspire you and serve as an example of how sports marketing should be done?

I love what Adidas Originals has done. Their partnerships, their gear, their activations. They stay fresh and have a good handle on where culture is going—ever since Run-DMC. Most sports marketing outside of basketball and football is kind of garbage.

Can you give us some examples?

I'd rather stick with the kinds that suck to not be incriminating—and I also think most marketing in general sucks. Sports marketing has been dominated by talking heads and statistics and not a lot of human storytelling. In addition, inspirational messaging has been tied up in non-equipment related product—Sprite, Gatorade, Red Bull. Fashion, music, art and entertainment will always have the most innovative and tasteful marketing, so sports aesthetically suffers in comparison to those industries. Aesthetics are not the core concern of sports, and therefore [also not emphasized by] its marketing. The best, most soulful sports marketing comes from Nike, Puma and Adidas. Their best work is all influenced heavily by urban youth culture, and you see that predominantly in basketball marketing.