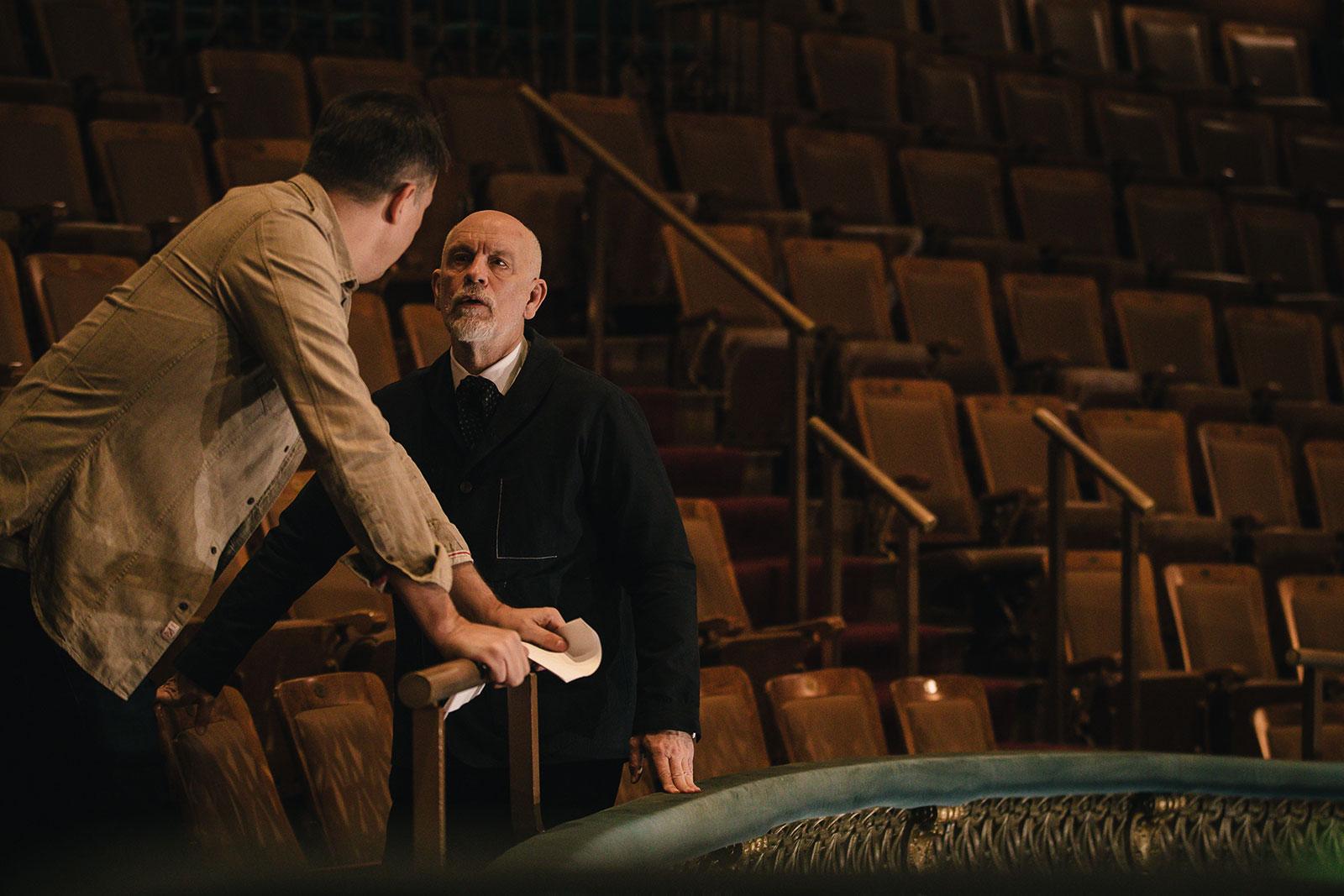 'As Great as It Gets.' How John Malkovich and CBS Made the Year's Most Epic Sports Promo

On Jan. 21, viewers tuning into CBS for the AFC Championship Game between the New England Patriots and the Jacksonville Jaguars were treated to an incredible pregame spectacle.

The network unleashed a four-minute film, or "tease" in the parlance of sports television, made in-house, featuring John Malkovich bemoaning the hoary clichés of NFL promos—before launching into his own brilliantly impassioned speech about the David-and-Goliath matchup you were about to witness.

The film, which you can see below, was the brainchild of CBS Sports creative director Pete Radovich, who wrote and directed it. It has since become one of the most celebrated sports ads in recent memory—picking up a Grand Clio at the Clio Sports awards in May, along with a slew of Sports Emmys.

We caught up with Radovich recently to hear the whole story behind the making of this gem—including the eureka moment, the remarkably efficient shoot day, and the challenge of following up a once-in-a-lifetime production.

Muse: Take me back to the beginning of the story. How did the idea come about, and how did Malkovich get involved?
Pete Radovich: He's been my favorite actor for as long as I can remember. I'd never reached out to him, because I didn't feel I had the right role for him. This was the moment we'd been waiting for. Of course, you reach out and you never know what you're going to get. He could be filming a movie in China for all you know. But it turned out he had some downtime. He was a football fan. The Patriots were in the game. He lives in Boston. Things just sort of lined up. Within a couple of days, I was emailing him a script, and he liked it right off the bat. He had very few comments, and said he looked forward to doing it.

Tell me about writing the script.
I have been doing opens for big games for so long. Inevitably there are clichés and beaten paths. I'm as guilty as everyone else. It was a Friday night, close to midnight. I was hanging out at my house, listening to music, with a glass of wine. And for whatever reason, I don't know how or why, the idea hit me—for him to tell the story in a backdoor kind of way. That's the best way I can describe it—the idea just hit me. I even texted my editor, Anthony Cortese, about it. I texted him, "I got it." 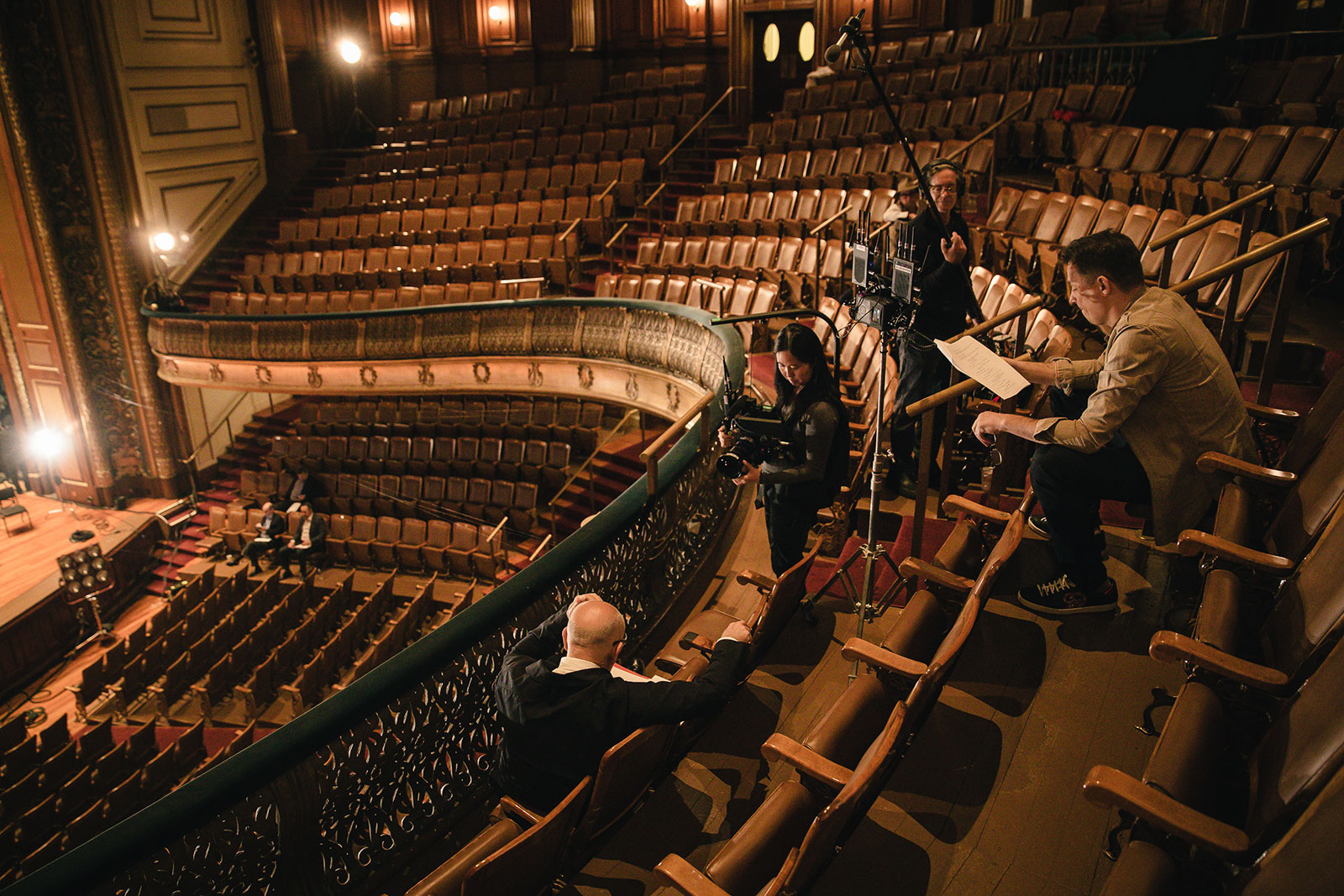 All photos by Amanda Westcott

And then you started writing.
Literally in the next half hour, I just started writing. Just lines. One-liners. It's amazing how much of the stuff from that first half-hour actually made it to the screen. A lot of it actually survived from the first draft. Just me, typing notes on my computer.

That's great.
It was one of those moments when you're a working creative—every now and then you think of an idea where you are 100 percent convinced it's going to work before you shoot a frame. The concept is so rock-solid in your mind. There's degrees of good. You hope it's great. But this was one of those few times where, going into the shoot, I felt really comfortable that we were going to have something good. 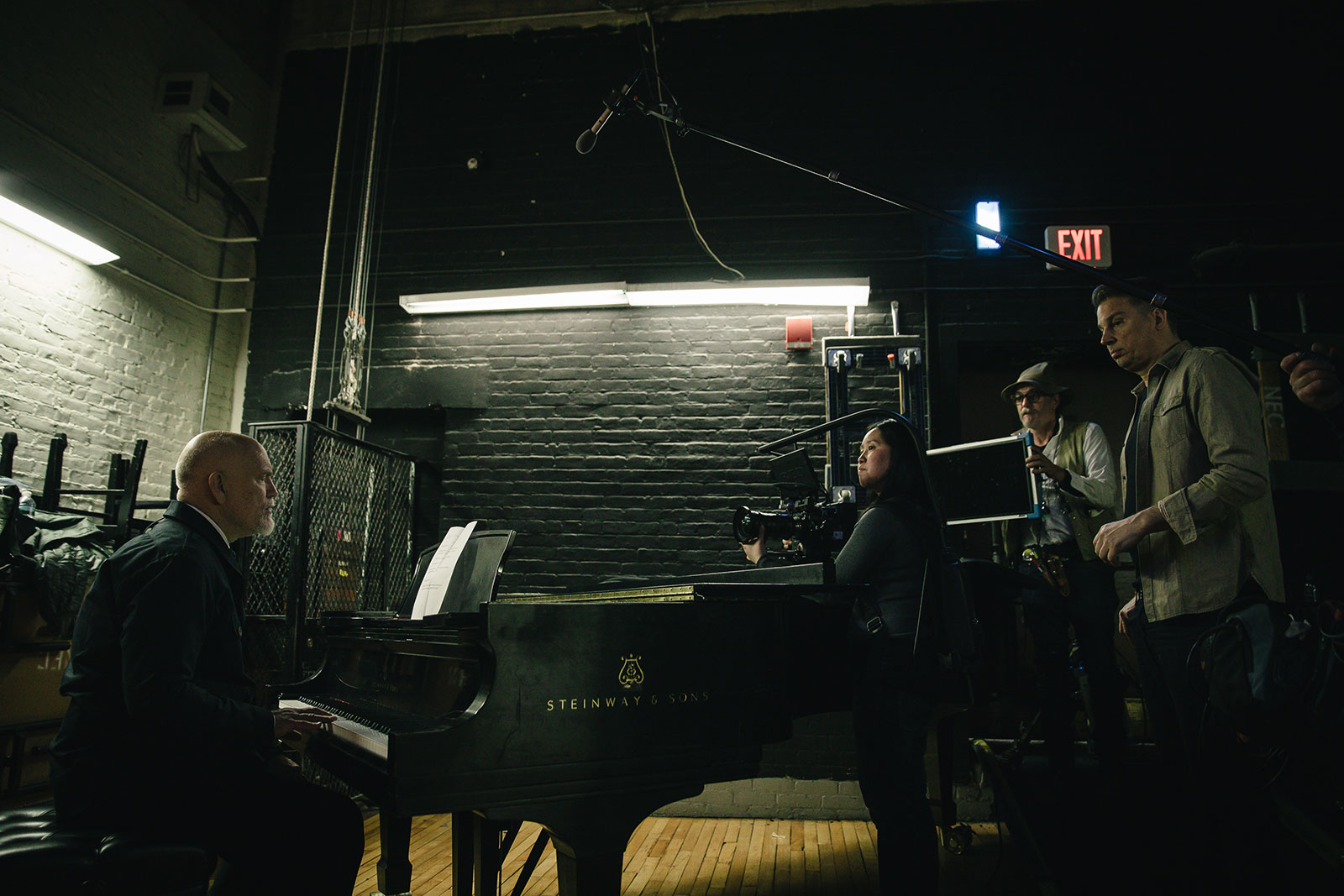 That's a great feeling.
It is. I can't tell you how many times I've left a shoot, whether it's for a Super Bowl or a big moment, and you question yourself the whole way home. "My God, is this going to be a disaster?" Nine out of 10 times, when I leave a shoot, I'm questioning myself. But the whole drive home from Boston, I remember thinking, "Wow, this is going to be good."

Obviously it works so well because you lean into this idea of these types of promos being clichéd.
And like I said, I'm guilty of it. The directors on stage—they're me. They're me and every other producer and director in sports television. It's making fun of ourselves.

And Malkovich works because you can imagine him seeing through the bullshit of that.
Totally. And he played right in. It was easy. I'd say about 70 percent of the lines were scripted, 30 percent ad-libbed. It was a good mix. When I'm working with actors, I don't like to lock into a script. I like to give the talent some freedom. In this case, even the actors he was working with had freedom to go off script, which they did. There were some things in there, little nuggets that made the final cut, that were absolutely improvised. 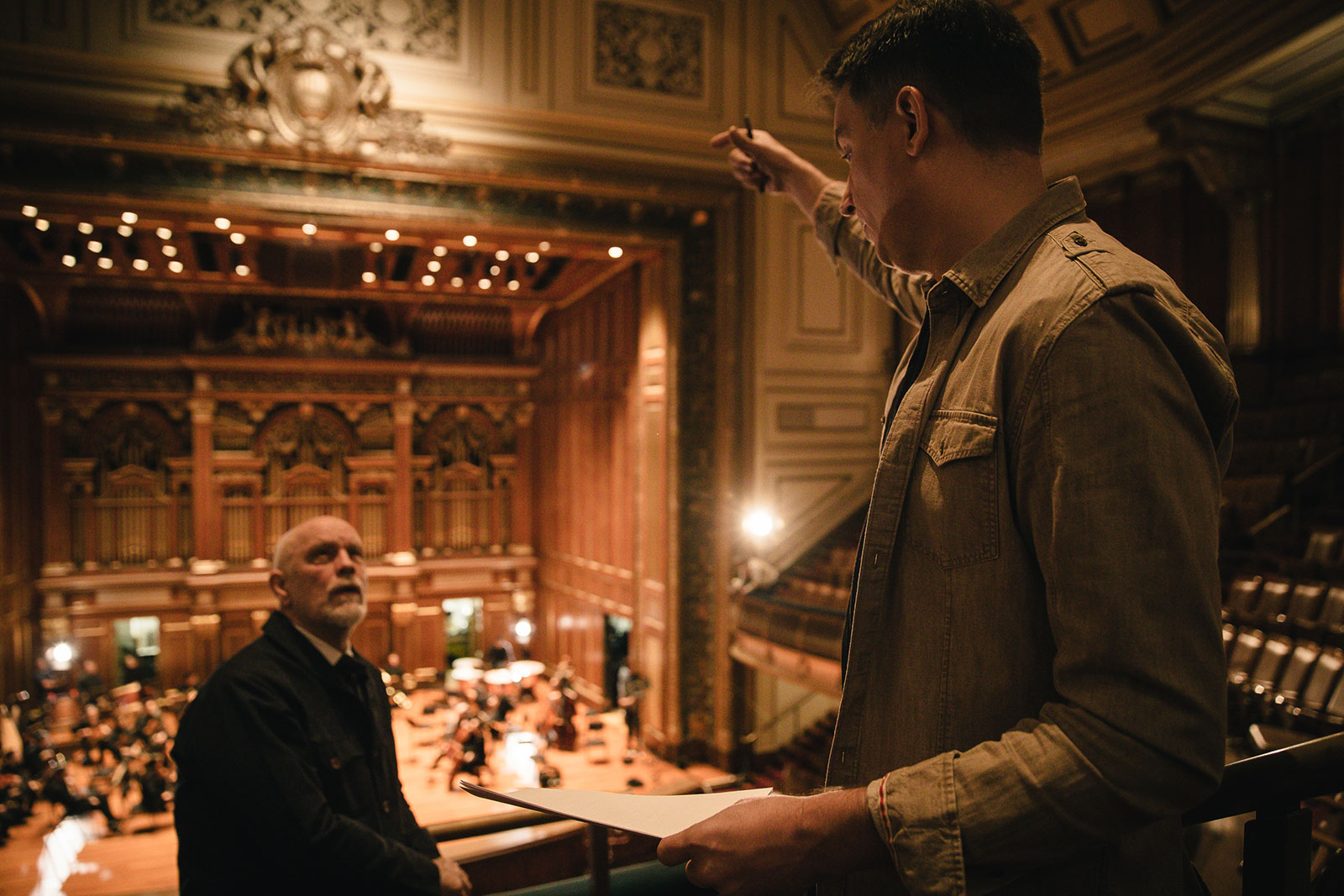 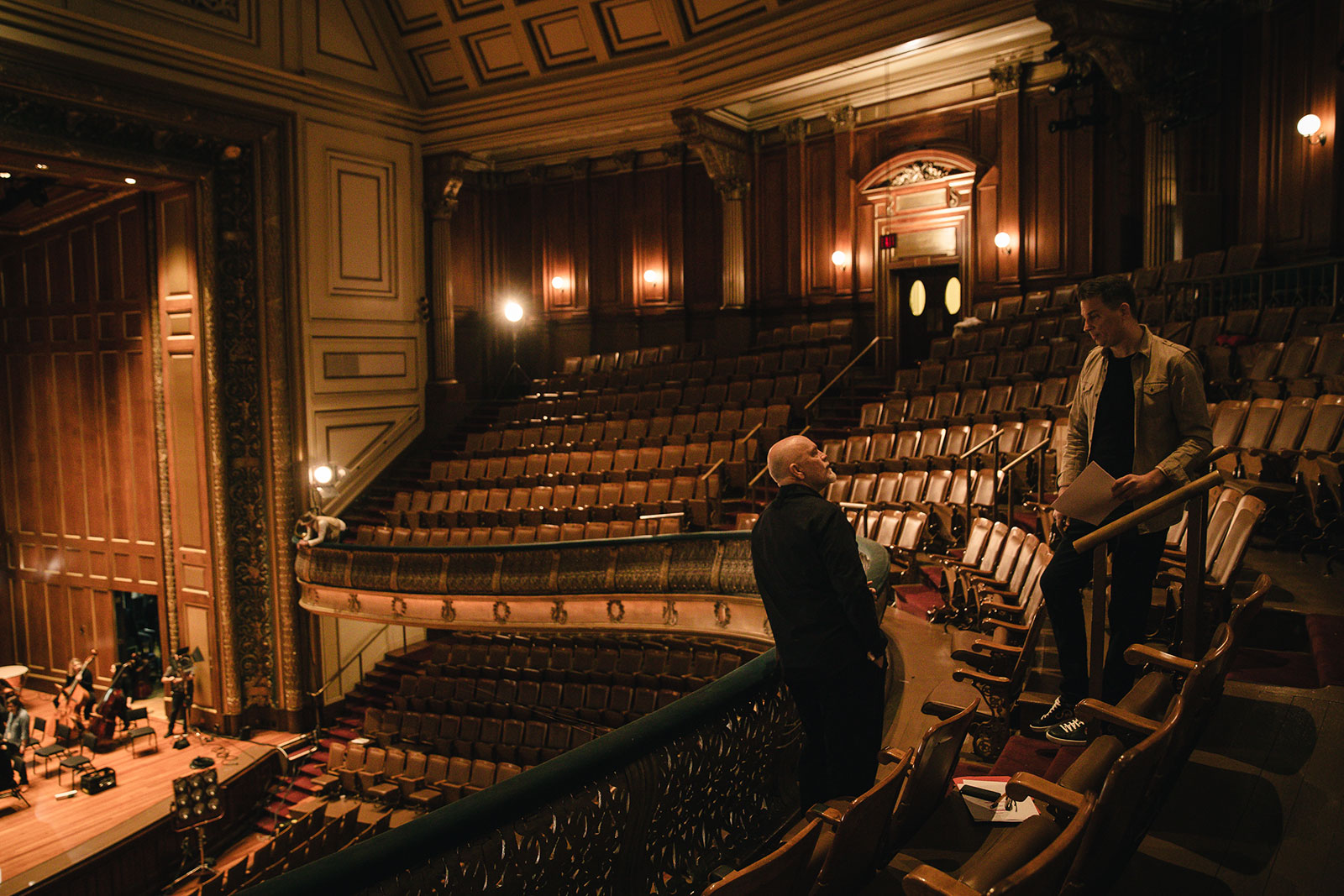 He's a pro.
It was just a tornado. We didn't have much pre-production. He doesn't usually use makeup. He just got right to it. It's probably the most efficient shoot I've ever been on. 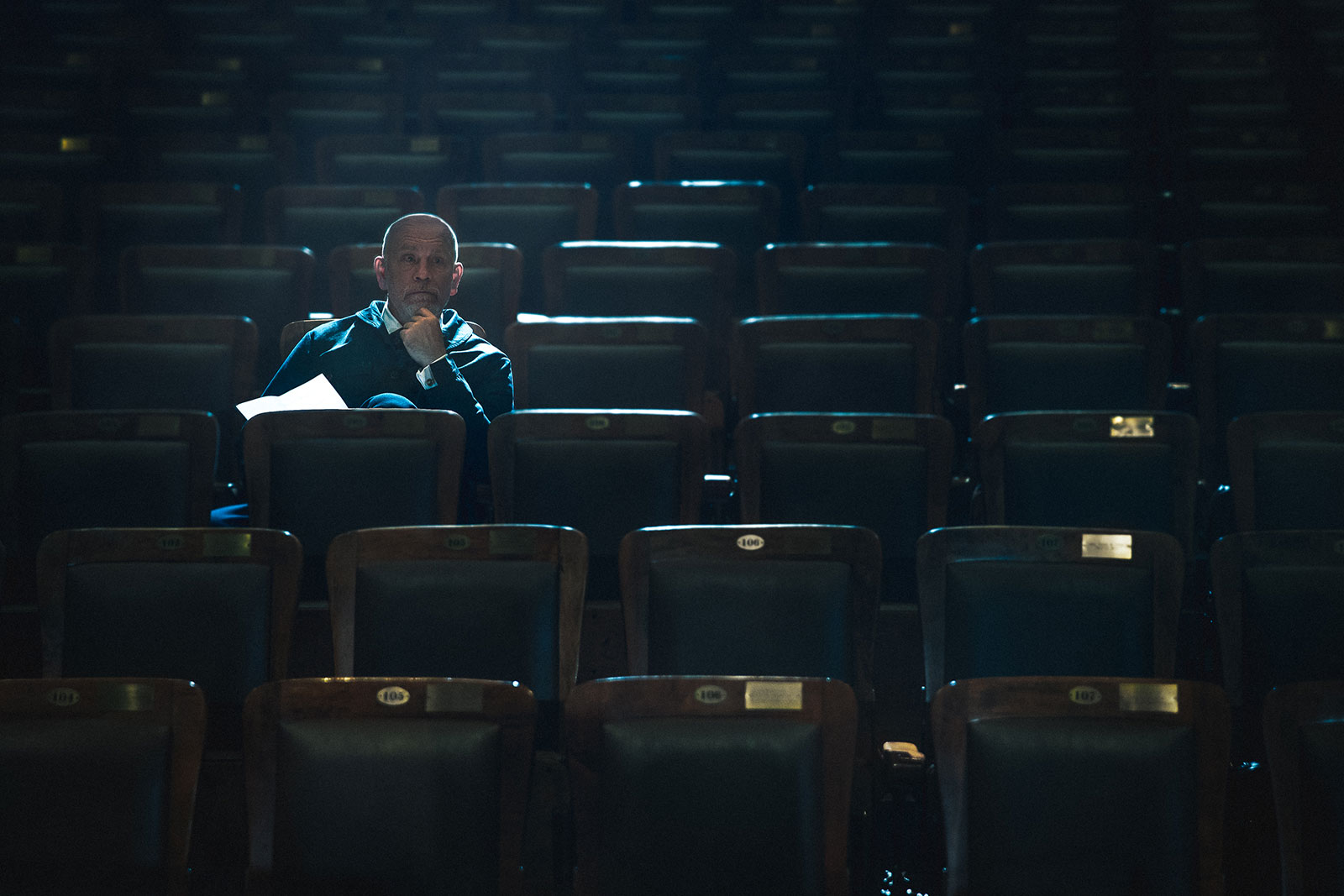 You directed it as well. What was that like?
For our big-game productions, we don't go out-of-house. We do everything in-house. I wrote and produced it, I directed it as well, and sat in the edit room afterwards for hours. It was definitely something close to my heart. It's one where I can say honestly it was cool to be a part of from the moment the idea hit me to when we finished the edits.

Was it a challenging piece to direct or to edit?
No, not really. The scenario was as great as it gets. This will never happen again, and I'm fully aware of that. It was the perfect storm of good things. You always fear the perfect storm where everything goes wrong. For whatever reason, this was one of those cases where everything went right. We shot on the Tuesday. It aired on Sunday. It was a tight turnaround, but it didn't feel like it. The editing it was pretty easy. It came together pretty quickly. 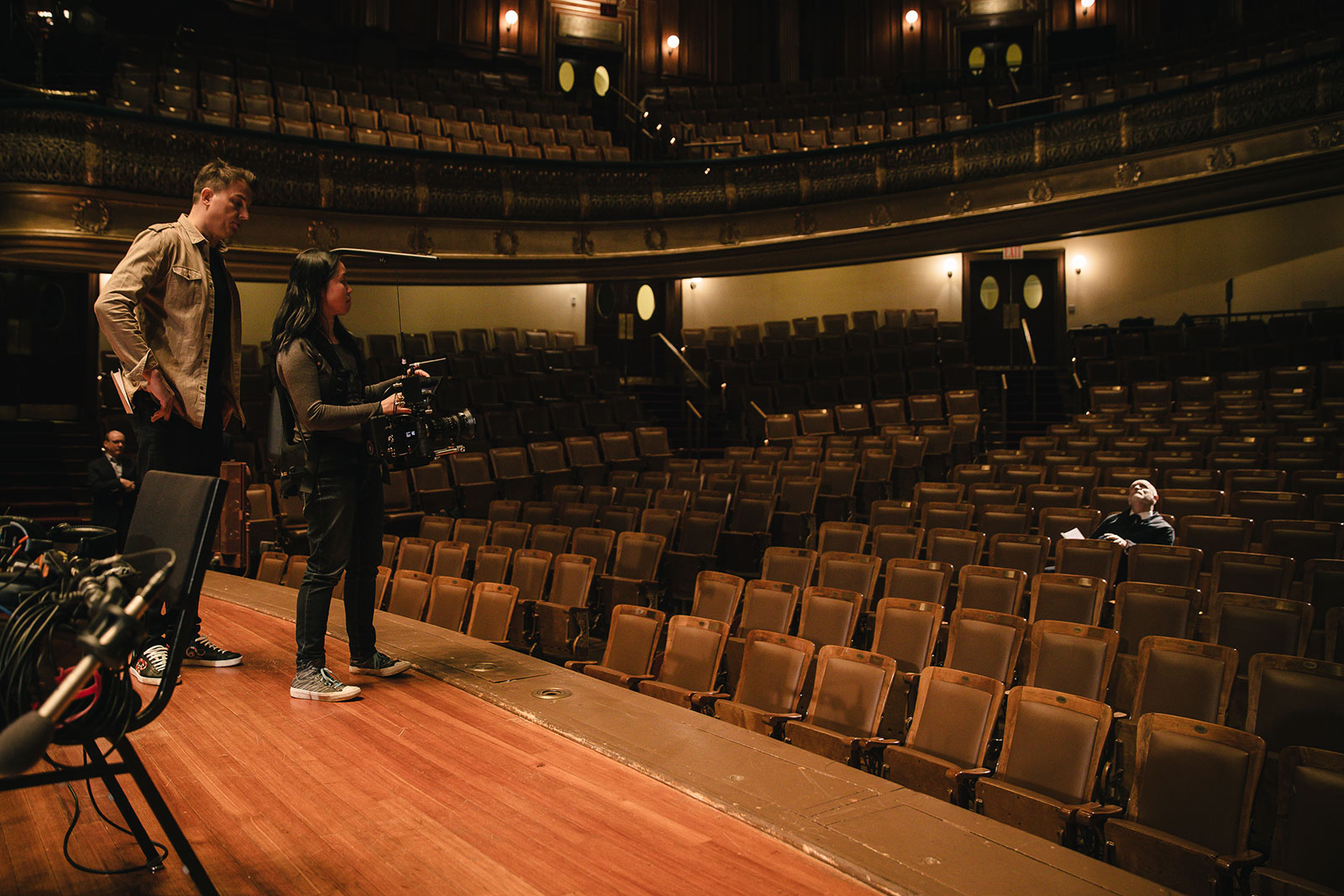 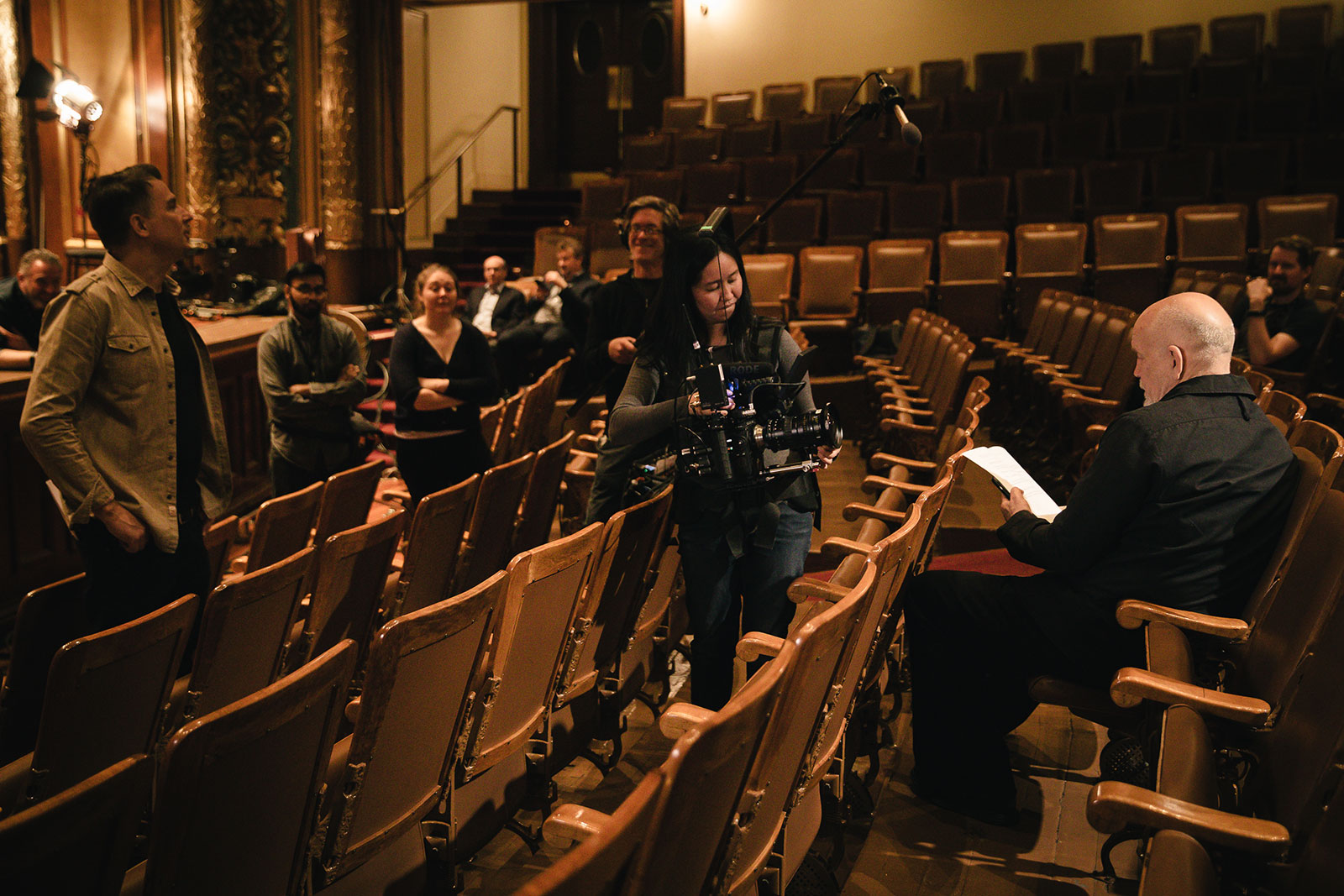 This is mentioned in the film, but why spend a ton of money on a tease when people are already tuned into the game? What's the purpose of that?
I'm kind of a sports TV nerd, so I'm really into this. Back in the day, a tease was designed to keep you on the channel. It was essentially a commercial. In this day and age, it's less about getting you to watch the game and more about making you feel like you're watching something special. There's an obligation on our part, I think, to entertain beyond just the game. Does the tease change the rating? Probably not. But at the same time, we do it because it's important. I know for a fact that people appreciate them. It's a movie trailer for the game. They're fun and they're different and they can be unique. Are they necessary? Probably not. But I think everyone enjoys them, from our end and on the viewers' side as well.

It's a four-minute tease. That's unusually long, isn't it?
Yes. I was only given about two and half minutes of airtime. When I showed the director's cut the night before the game, at our production meeting, I told them I had a shorter version for air. And Sean McManus, our chairman, and Dave Berson, our president—they loved it. It became a matter of, "OK, let's figure out a way to find an extra minute and a half of airtime to make this work." And to CBS, and Sean, and everybody's credit, they found a way to make it happen. And here's the thing: If they had simply said to me at that moment, "Listen, it's great, but we can only air the two-and-a-half-minute version," which is something that would happen at a lot of places—then we're not on the phone right now, and I'm not at the Clios, and none of this would have happened. Luckily for me, I work at a place where everyone got on board with it and made it happen. Now, that said, I'm sure if I go back next year and say, "Hey, I need an extra minute and a half again," they'd all tell me to go screw! [laughs] 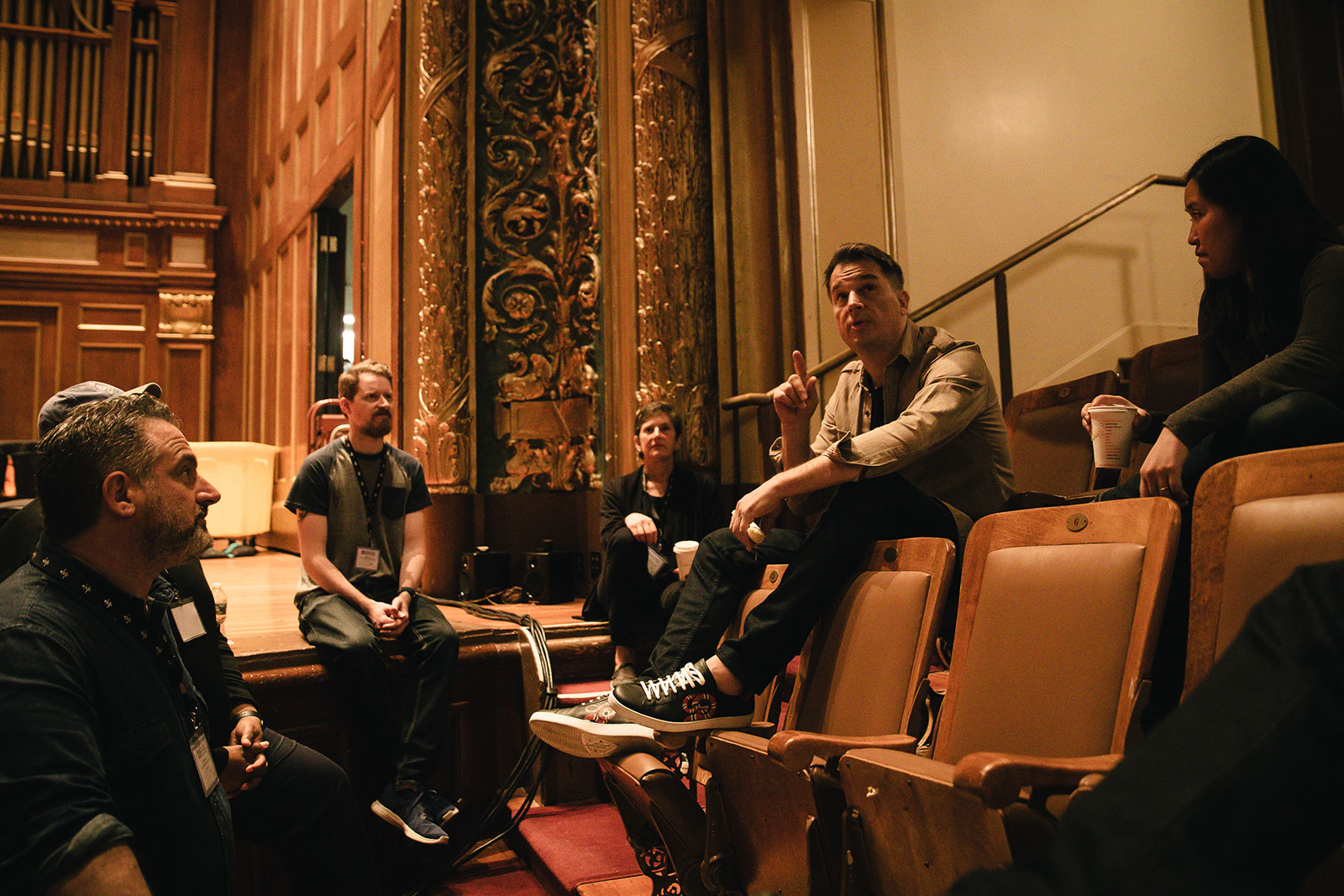 Can you give me a sense of the financial investment on this one, relative to the teases you normally do?
It was not a super high production cost, comparatively speaking. I can only say this: I have friends in advertising that do this full time, and every time I tell anyone who works in the advertising world what it cost, the reactions are hilarious.

As in, they're shocked it was so low?
As in, "That's a million-dollar-plus commercial in my world." And it was nowhere near that.

Including talent fee and everything?
Yeah.

The spot won a Grand Clio at Clio Sports, as well as a handful of sports Emmys. It's become a juggernaut of an awards winner. That must be pretty satisfying.
The awards thing is nice. I've had a little bit of success through the years with that, but nothing like this. What I keep telling my crew is: Enjoy this. This is fantastic. It's amazing to have this kind of recognition. But at the same time, understand there may be only one way to go from here and that's down! [laughs] I don't know how we could ever match this again. It's like a movie that does really well. And then you have to make the sequel. 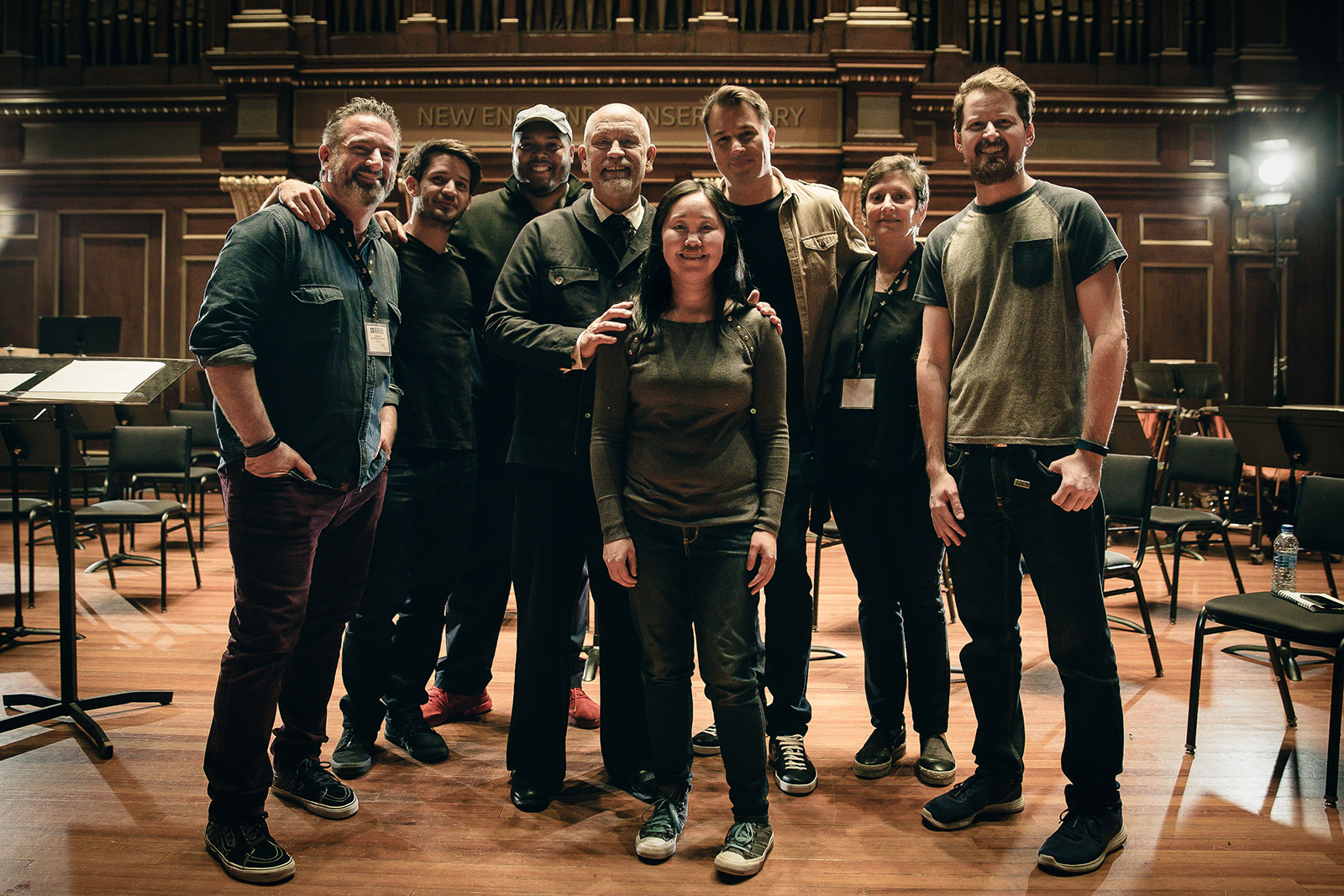