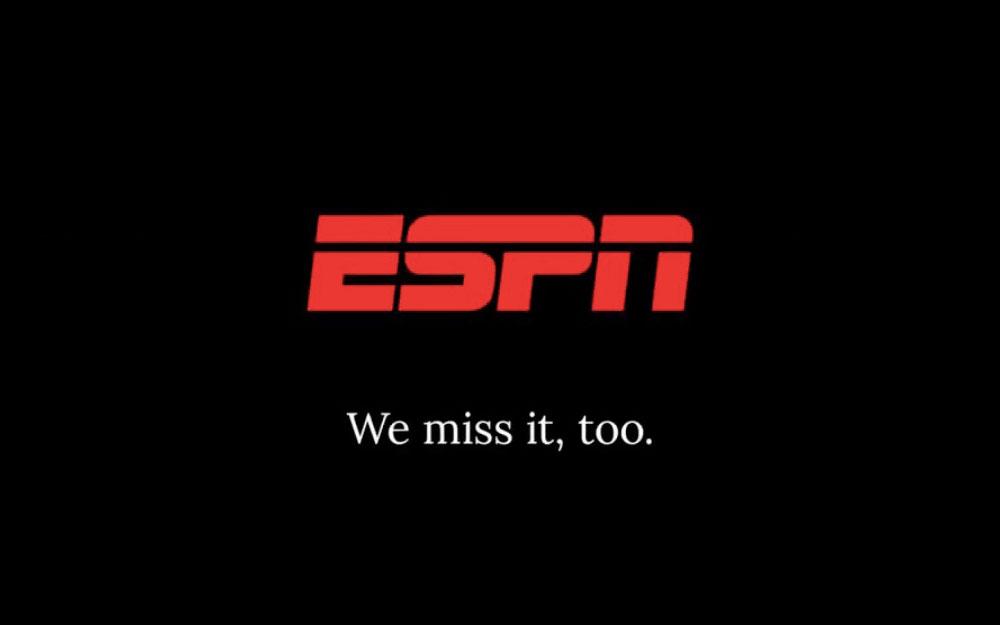 Campaign takes on a 'much larger meaning'

ESPN's latest "There's No Place Like Sports" commercial gains added poignancy because it drops amid a shutdown of basically all meaningful sports activity, professional and otherwise, due to the coronavirus pandemic.

The plan was always to release a third spot in the campaign at the end of March "with a theme centered around 'Hope springs eternal' for sports like The Masters and MLB opening day," says ESPN senior vp of marketing Laura Gentile in remarks accompanying the 60-second clip. "When live sports came to an abrupt halt, that theme of hope and optimism took on a completely new—and much larger—meaning."

Following the template of previous spots in the series, developed with Arts & Letters Creative Co., we're once again treated to electrifying footage of memorable moments on and off the field:

ESPN There’s No Place Like Sports: Believe in Anything

Highlights include Zion Williamson's selection as the top pick in last year's NBA Draft; 42-year-old Zamboni driver David Ayres' improbable appearance as an emergency goalie for the Carolina Hurricanes (he recorded the win!); and octagon swagger from UFC bad-boy Connor McGregor, who proclaims, "I'd like to take this opportunity to apologize … to absolutely nobody!"

There's color, cacophony, crowd catharsis—and a flashback to Opening Day at Boston's Fenway Park last year that provides a bittersweet reminder that Major League Baseball would be welcoming the new season this week if not for COVID-19.

"From the very beginning, 'There's No Place Like Sports' was purposely designed to be an ever-evolving stage for sports to showcase the timeless themes of human potential and connection," says Gentile. "Now more than ever, we want to reminisce about those moments with all fans—and in acknowledging the current times, let them know that we miss it, too."

With stadiums empty, ESPN has relied on alternative programming to replace live game telecasts. Such fare includes documentaries, re-runs from its 30 for 30 series, showcasing network talent on The Source, and reviving The Ocho, the network's forum for obscure and wacky competitions, in a 24-hour Sunday programming block on ESPN2.

"Substance, heart and humor are at the core of ESPN's brand," Gentile says, "and in difficult times like these, we want to be a place where fans can come for a bit of an escape."