Lots of men time their the operation to March Madness

Doctors see a 30 percent increase in requests for vasectomies around March Madness, as many guys time the procedure to the NCAA tournament—figuring what better time to lie down and recuperate?

Now, Buffalo Wild Wings is capitalizing on that trend in amusing fashion, minus the lying down part. The chicken-wing restaurant chain has created the Jewel Stool, a special barstool for guys who've just gotten snipped—featuring a cooling apparatus for one's junk along with a chilled cup holder and a "beer me" light to summon the wait staff for another cold one. Because you just need some TLC right now.

The stunt was dreamed up by The Martin Agency, which won the BWW ad account late last year. Check out the Jewel Stool announcement video below (featuring an funny cameo by Martin creative director Neel Williams as the fake doctor):

Yes, they actually made these things and will be introducing them at two locations next week—in New York's Times Square and at the Koreatown location in Los Angeles.

As Neel mentions in the video, the seats aren't doctor approved. And to be honest, that gleaming pyramid of metal on the seat doesn't look super comfortable. But presumably we'll know either way pretty soon, as guys in NYC and L.A. test out the thing, if they're brave enough.

Muse spoke to Scot Crooker, creative director at the Martin Agency, about the effort.

How did inspiration strike for this idea?
It actually came up fairly early in our internal conversations about March Madness because the phenomenon of guys who are planning to get a vasectomy, scheduling it during the tournament, isn't new. We are always mining for the best and most relevant cultural stats that enable us to have impact on conversations and the world that our consumers are living in. Urologists have even been promoting Vas Madness for years; their local ads are all over the tournament.

Part of our mission for Buffalo Wild Wings is to try and help fans have the best tournament-watching experience possible. And as smart as it may be to schedule a surgery so a guy can lay on the couch and take in all of the games on a weekday, it still isn't the optimal sports-watching experience. Guys aren't going to want to come in with a bag of frozen peas and hang with their buddies. That's why we created the Jewel Stool. So a guy could still come be amongst his herd and keep cool at the same time. It's a small gesture but indicative of the bigger idea.

What was the process like for designing this thing, and does it work as advertised?
We actually created a very crude prototype for the chair pitch to present the idea to our partners at Buffalo Wild Wings. Shortly after beginning work on the larger March Madness campaign, we engaged a team of fabricators and designers at Crux Scenica in Richmond, Virginia. The goal was to create a seat that could legitimately get cold and also keep your beer cold. It was critical to consider where it should be cold, how the cooling unit fit between a guy's legs and other ways we could design the chair to help the cause—we needed it to really work!

We also met with a urologist and got his input on how to best design the chair for optimal comfort, and he recommended we elevate the cooling device a few inches off the seat so it's nice and snug. Then we implemented bells and whistles—things like having a beer button so the user wouldn't have to move around. The entire system works on a 20-minute timer. Because that's the doctor's orders! We've done multiple rounds of testing on this, and it hovers around 40 degrees in all the right places. And the beer button works, for sure!

Do you expect guys to actually come in and use them?
We definitely think people will  use them. Whether they've had a vasectomy or not, we think the hype and the intrigue will cause anyone to see this and jump on to try it out. We believe once they are in the bar, people will be lined up to experience this thing, share socially, etc. Ideally, it would be great if someone who actually had a vasectomy used it.

The tournament is one of the greatest rituals in American sport. If we can help one guy enjoy it to his post-op appropriate max, then it was worth it. Regardless of how much use these chairs get, we believe this effort still stands as a pretty potent, culturally relevant symbol of our belief that at the bar with others is the best way to enjoy moments like these. Watching sports is at its best when it's at Buffalo Wild Wings.

The Jewel Stool is part of a larger campaign from Martin called "That's March Madness." The NCAA basketball tournament is, of course, a big time of year for the restaurant chain, which is basically a sports bar. The new creative comically shames guys for watching the early rounds at work or at home, when they should be manning up at the bar.

"The reality is, the way people watch sports is broken," Crooker tells Muse. "They've been tamed to think it's OK to watch games on a tiny screen by themselves. Or sneaking March Madness in while at their cubicles. Or even worse, while hiding in their lonely man caves. We needed this work to shake fans out of their domesticated daze and remind them how sports should be watched—at B-Dubs, beer in hand, wings at the ready, surrounded by wild fanimals."

Other spots mock guys for streaming the tournament online (which could present buffering problems) or for celebrating a co-workers birthday party at the office when they should be playing hooky. There's also an execution specifically made for overtime games. Check out those three spots below.

Finally, below are some more Jewel Stool materials—a look at a fake brochure that Martin created for it. 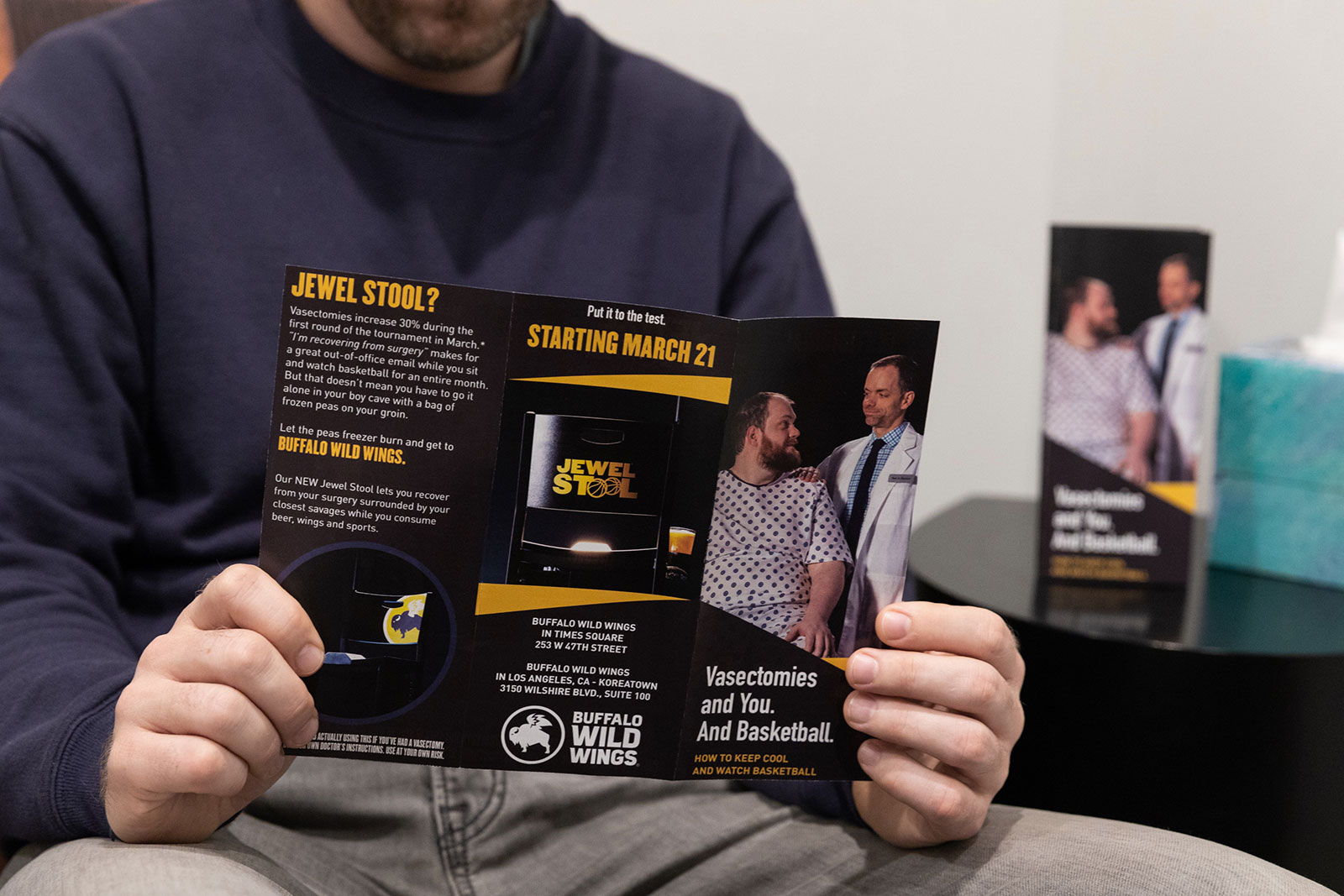 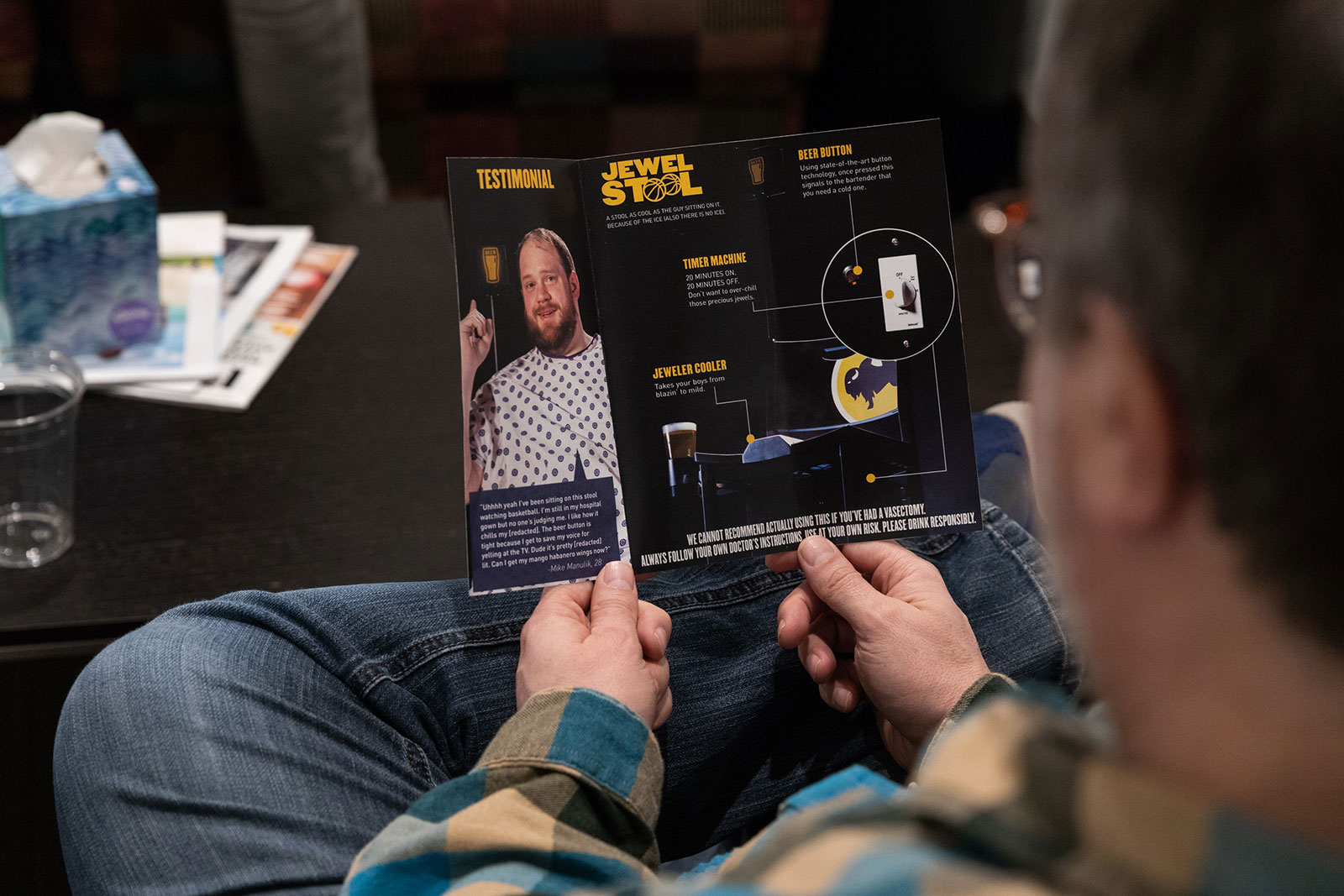 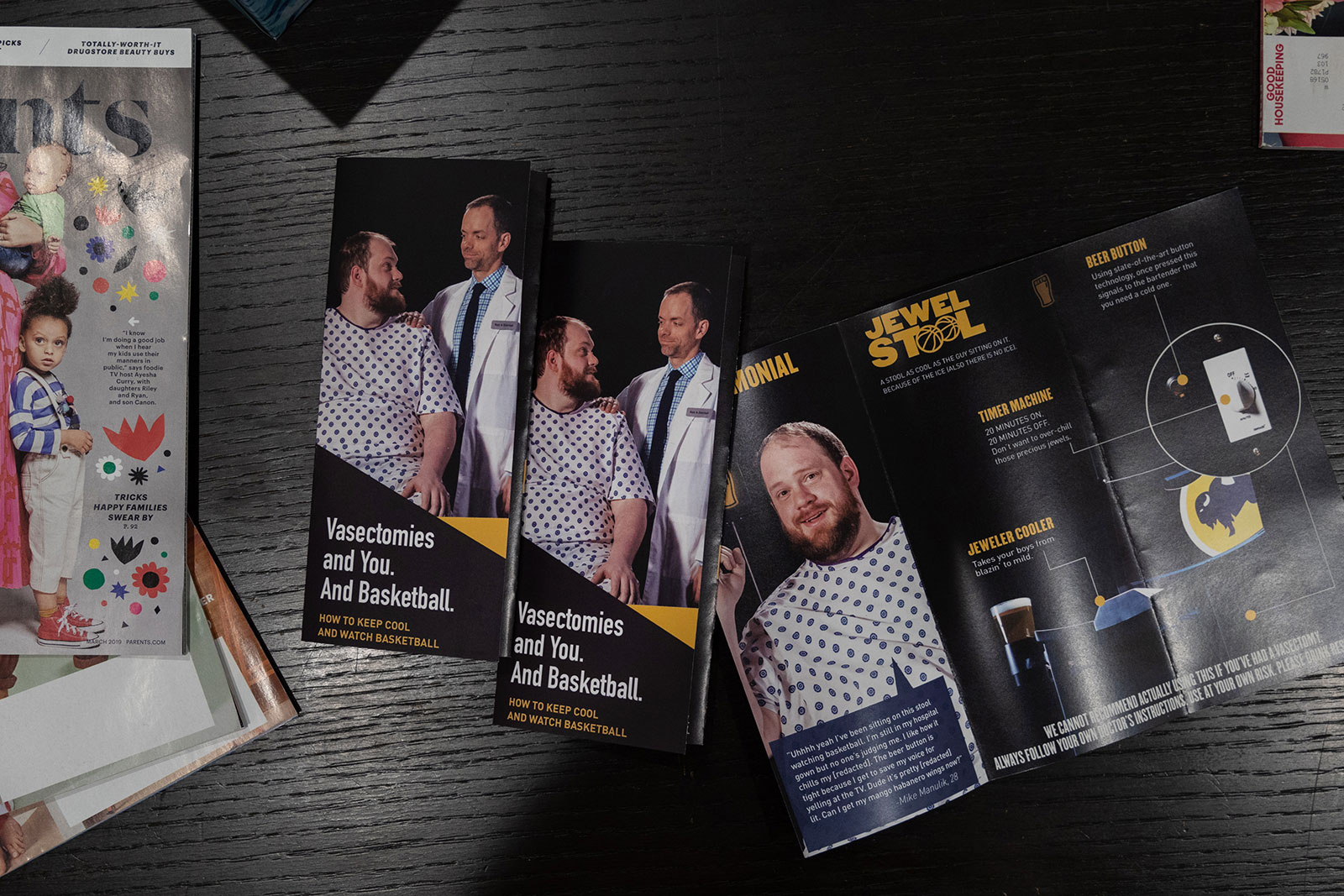 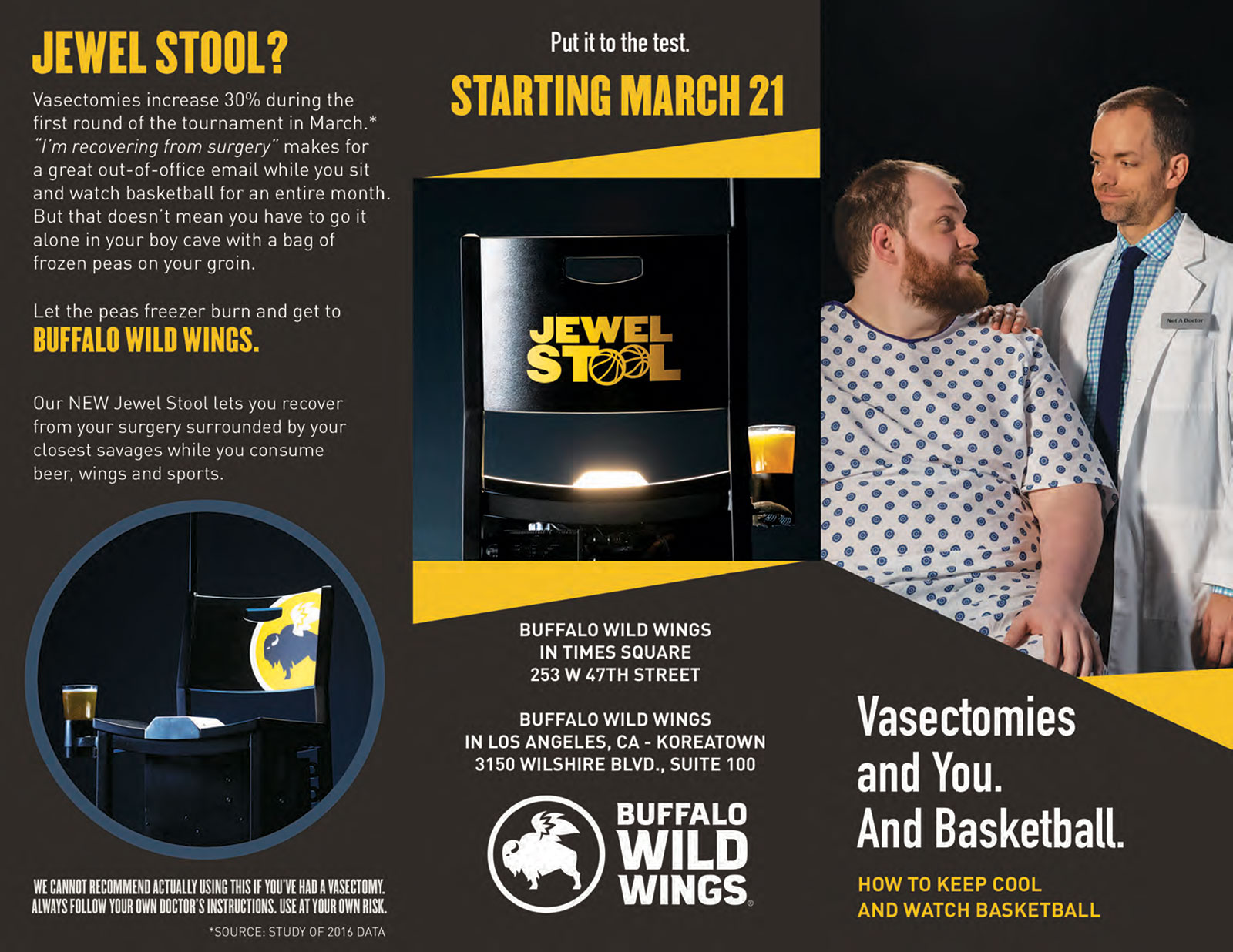 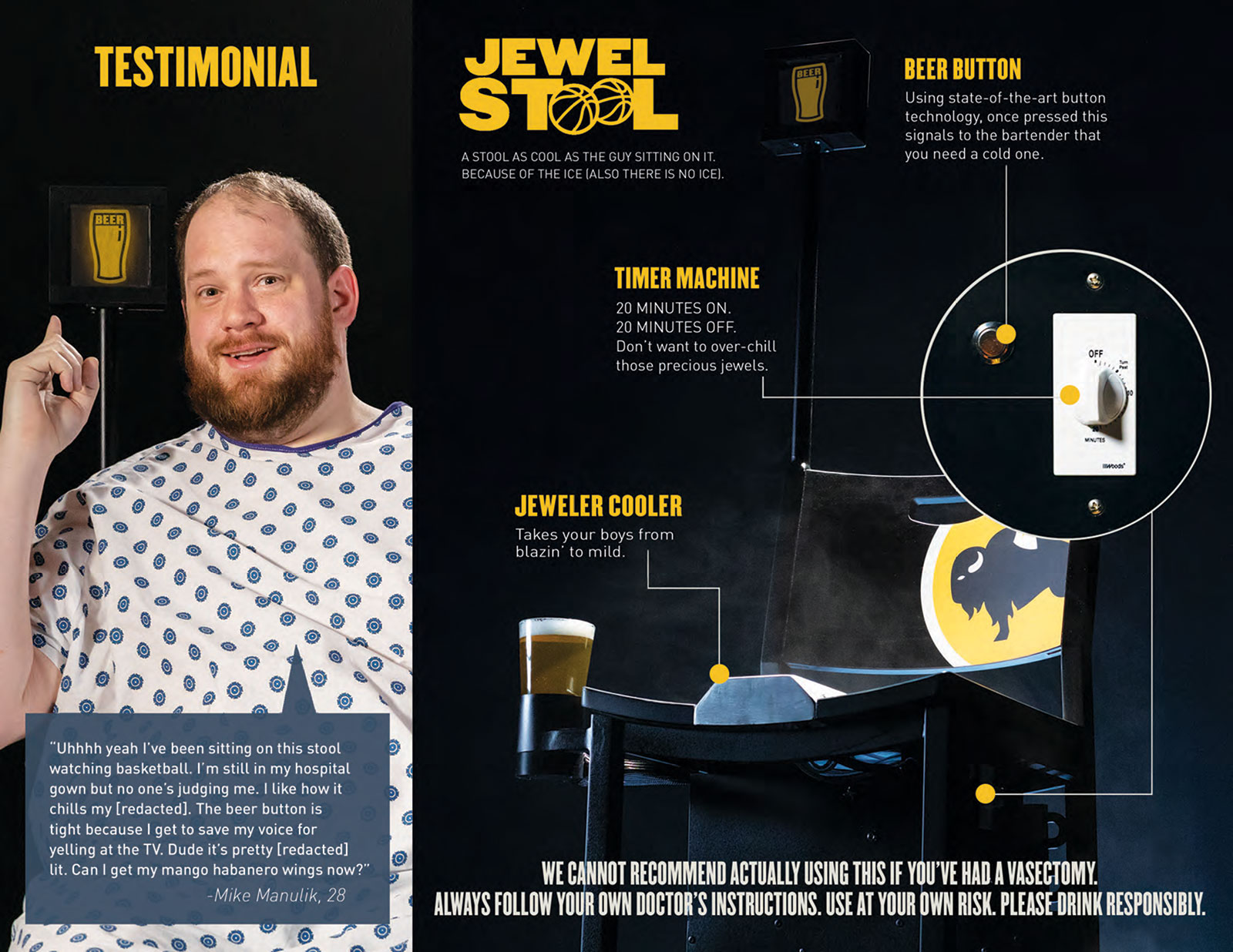