The races could do with a refresh. Who better than Paris agency Buzzman to sex up a sleepy scene? With their help, European betting operator PMU has released "The Calling."

We don't know much about horse races and were prepared not to care. I don't have princess friends, and visiting a PMU—aka, the local seedy bar-slash-tobacconist's—is the kind of experience one works hard to forget fast.

But this piece knocked us off our saddles (pun!).

It's exhilarating from the go, but also feels chaotic at the outset. Marianne, the symbol of the French Republic, is given vivid revolutionary life in a rendition of "Liberty Leading the People."

When she jumps on a horse, we're flung onto a midcentury battlefield, then the moonwalk—which curiously also features an oxygen-defying horse—and on we go, through the fall of Troy and a Star Wars-style battle before these fictional characters combine to reveal the provenance that unites them: These are all the names of horses!

"Horses' names are always a little weird, and nobody addresses that," says Buzzman founder and president Georges Mohammed-Chérif in an interview with Muse. "So each scene of the ad comes from a horse's name: Lady Liberty, Trojan Horse, Apollo 11, Space Rebel, French Soldier."

Two interns conceived the idea—Oswald Yvan and Apolline Lemaire. "Horse racing is an incredible spectacle, and we needed to make PMU feel more like an entertainment brand," Mohammed-Chérif says. "Oswald and Apolline had been here for something like two months … we hired them right after this pitch!"

"The Calling" culminates in French Soldier taking a tumble, at which time the spell is broken and we see things as they are—jockeys and steeds racing amid green pitch. Tense bettors watch live and on a screen (in an aforementioned "seedy bar," which here takes on the countenance of a friendly local watering hole, which is fair enough; you can be both) as Space Rebel takes the finish.

The tagline, "Epic Bets," is a simplified take on the actual French tag, "Que les meilleurs gagnent," or "May the best win."

"We wanted to spotlight the bettors," Mohammed-Chérif explains. "Betting is work for those who win: You study the horses, the terrain, the weather. All that is a great science, and that leads to great entertainment."

In keeping with that idea, actual bettors will feature in an accompanying print campaign (shown below). "We shot real people, not models or actors," the agency president goes on. "It wasn't a staged shooting. It needed to feel authentic."

As a fun easter egg, the print ads include one man whose head is in his hands, because he's lost—having bet on French Soldier, who falls in the ad, according to Mohammed-Chérif. That guy just can't win! 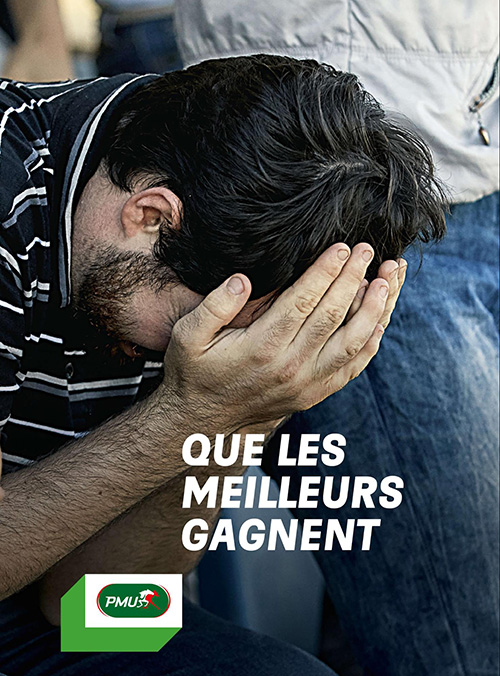 While studying the work, and thinking about how we feel when we encounter local bettors at local bars, we'd assumed that, like sports viewing trends, the betting scene was aging. This would explain the brand's desire to fun it up.

But actually, sports betting among young people is on the rise: In the U.S., 18- to 29-year-olds make up 40 percent of bettors. In the U.K., those aged 18-24 compose about 58.5 percent. In the latter study, 97.4 percent of overall sports bettors put their money on horse racing.

"We're not coding to young people versus old people. Everyone knows horses have weird names; it's inclusive," Mohammed-Chérif says. "It's a campaign that will be seen in lots of places, by people who know PMU or those who don't. But those who know the horses will say, 'I never thought of it this way.' "

Asked how PMU reacted to the pitch, Mohammed-Chérif laughs. "Imagine how you felt when you first saw the work. Their surprise was greater than yours!"

Agencies (and clients) may differ on whether it's smart to befuddle your viewer, but the risk paid off. "We won on the first round—which is rare—against three major agencies," Mohammed-Chérif says. "Forty-eight hours later, they called to say we got it. Almost no changes were made to the original film."

It took 15 days—including six days of shooting—to bring it all to life, with help from director Matthijs Van Heinjningen (perhaps best known for "The Bear," a modern ad classic by BETC Paris for Canal+).

"For six days, and with horses, we traversed different eras—one day Marianne, the next on the moon. We traveled," says Mohammed-Chérif. "It was a massive labor of décor and costuming, and beautiful post-production work by Mikros."

Sound, managed by studio The, was fundamental, he goes on. "In fact, the guy who does the commentary in the [French] ad is the studio's boss! We tried lots of actors, and he did it best. It's hard to commentate like that; it tears at your throat."

A French version of the ad is below, so you can appreciate that work like a nice, scratchy cognac.

The calling went live in its original :75 format on TV from April 26-29. Through May 19, it will broadcast in a :30 iteration, accompanied by web diffusion, display and print nationwide.

"It was an event, this ad," Mohammed-Chérif says. "PMU loved it; they presented it before 600 employees. It was applauded."

That sentiment is shared at Buzzman, which now considers the piece one of the best films it's ever produced. "It's a great pride for us, for what's become one of our biggest clients."

Other print iterations appear below. 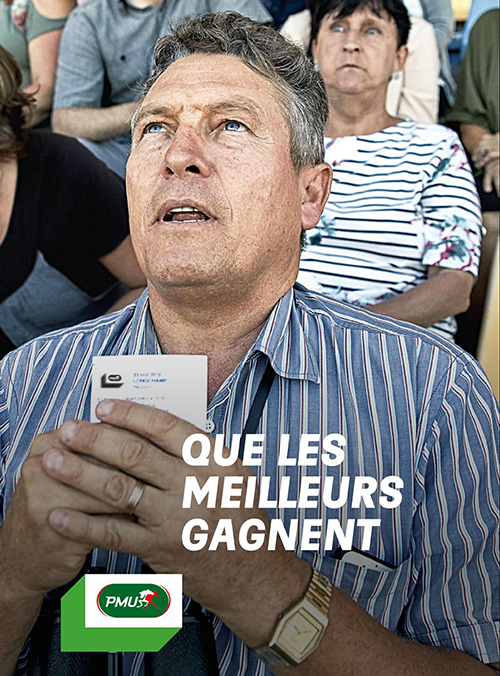 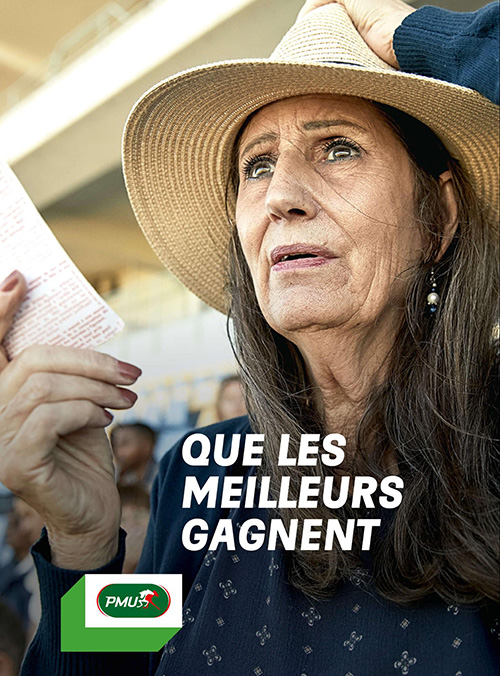 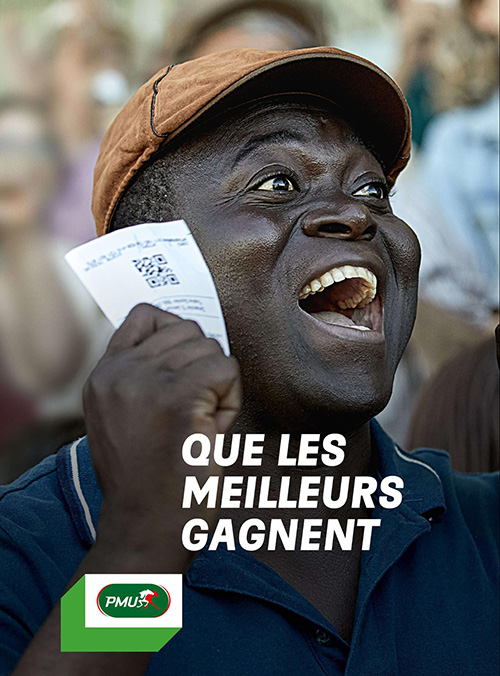 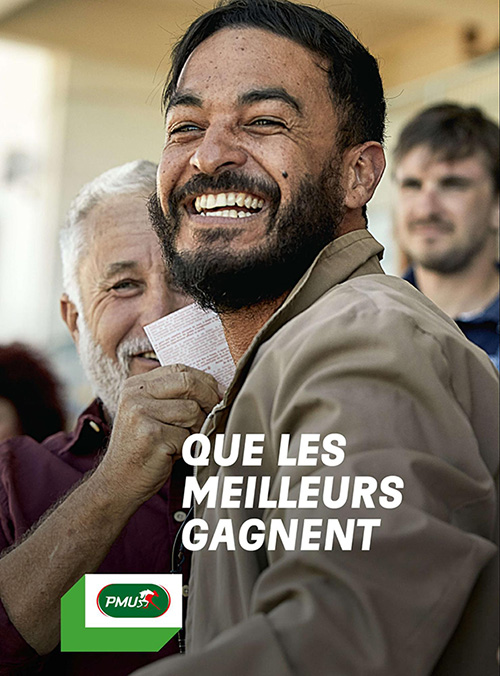