Athlete or Mom? You Shouldn't Have to Choose, Says This Epic Ad

She's a mother of three, busily caring for a young family, with all the time-consuming responsibilities that entails.

She's also in training for the 2020 Tokyo Olympics, rising at dawn for punishing high-altitude workouts in the Swiss Alps.

Meet triathlete Nicola Spirig, Olympic gold medalist from Switzerland. "An athlete or a mother, you shouldn't have to choose," she says in "Superfrau," a three-minute film from On running shoes.

"I'm a mother and an athlete, in that order," she says in the film's opening sequence, cradling her infant daughter Alexis as she stares out at the icy expanse of Lake St. Moritz, where she regularly swims as part of her Olympic preparation. "Sport is my passion. Family is my love. It's a huge privilege to combine both."

"The narrative wrote itself, in a way," Fackrell tells Muse. "Just the notion that Nicola has to compete in an event with three disciplines and look after three kids was enough. Excuse the cliché, but her life has to run like Swiss clockwork for it to work.

"I was also interested in the three events of the triathlon, and how it mirrored the three-act structure of most dramas: the set-up, the confrontation and the resolution," he says. "I think that helped pace the narrative, and make the three minutes more watchable."

"Superfrau" takes its title from a sobriquet bestowed on Spirig by a St. Mortitz denizen during filming. It's highly watchable indeed, with straightforward storytelling well served by the crisp, at times otherworldly alpine scenery.

The four-day shoot was sandwiched between two Olympic qualifying events, "one of which she won—combined with her life as a busy mom, and insane training schedule," Fackrell says. "The kids were very good when the cameras started rolling. Yannis, 5, Malea, 2, and Alexis gave us everything we needed. I also interviewed her dad about her amazing double life—although it didn't make the final cut—and he was quick to point out it's a triple life: She's also a lawyer."

Shooting on location in St. Moritz "gave us this incredible backdrop, a ready-made Wes Anderson pristine, orderly tableau," he says. The biggest challenge "was the DOP being able to keep up with Nicola—which he amazingly did—often running backwards in front of Nicola in rough terrain."

Spirig recorded the narration in her BMW SUV, "high up in the Alps, with no one around," Fackrell recalls. "She gave us this warm, gentle read, which I think is why she comes across so well in the film."

"Superfrau" echoes themes explored in Droga5's Chase spots featuring tennis champ Serena Williams and her daughter. Like Williams, Spirig successfully returned to elite-level competition after becoming a mom. (Most recently, she took part in the World Triathlon Series Grand Final this summer, just 12 weeks after her third child was born.)

Fackrell, a former creative director at both Wieden + Kennedy and 180 Amsterdam, is no stranger to inspirational sports advertising, having worked on many notable campaigns for Nike and Adidas through the years. His portfolio includes award winners such as "Tag" and "Shade Running" for Nike, and Adidas' "Wake Up Call."

For Swiss sneaker brand On, launched in 2010 and considered an up-and-comer in the performance category, "Superfrau" targets women 18-34 "who lead an active lifestyle, with added emphasis on those with an interest in core and casual running and or triathlons," says Feliciano Robayna, head of sports marketing at the company.

"We're also a targeting mainstream brand audience," he says, "as it's a human interest story that transcends sports." 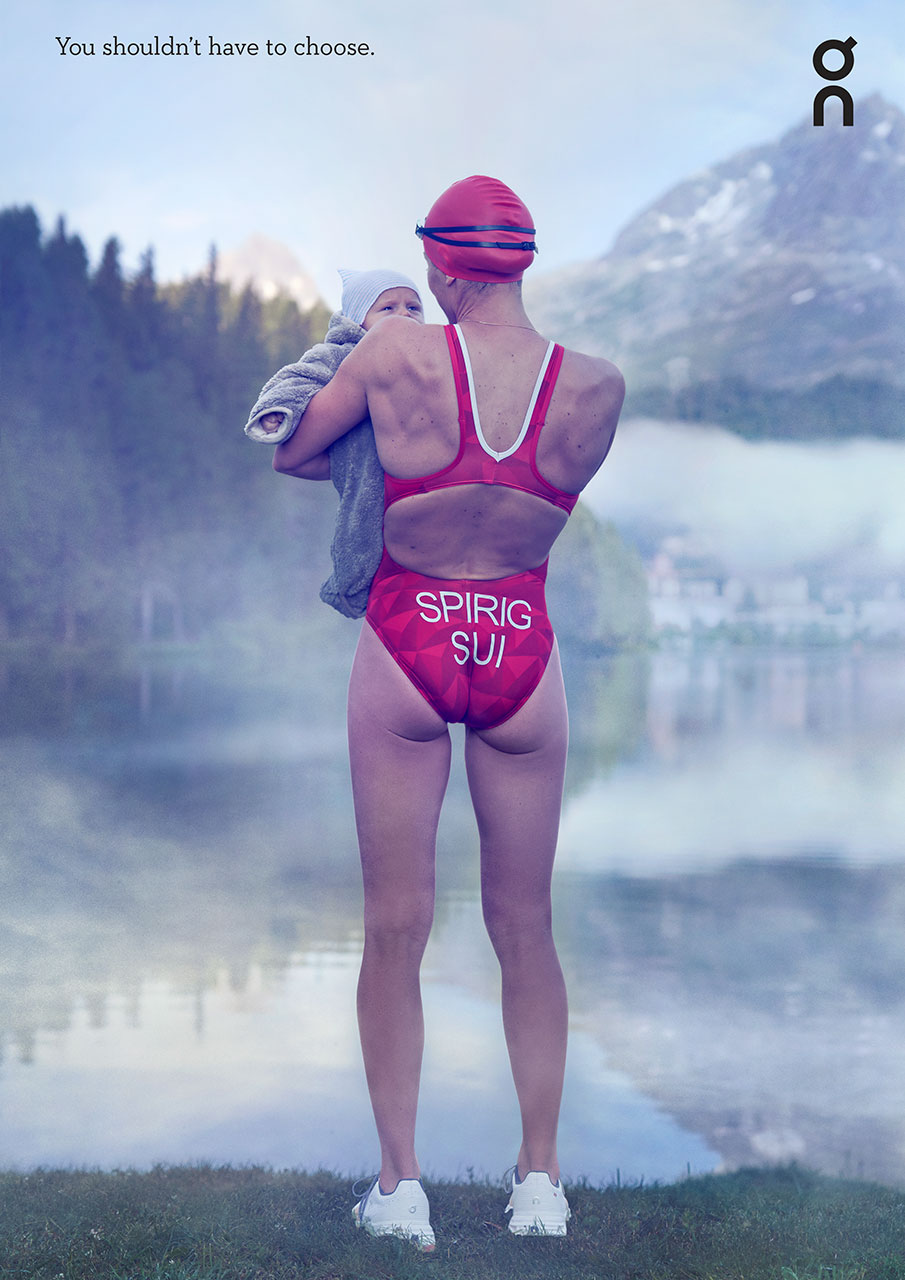