Nick Saban's in the mix, too 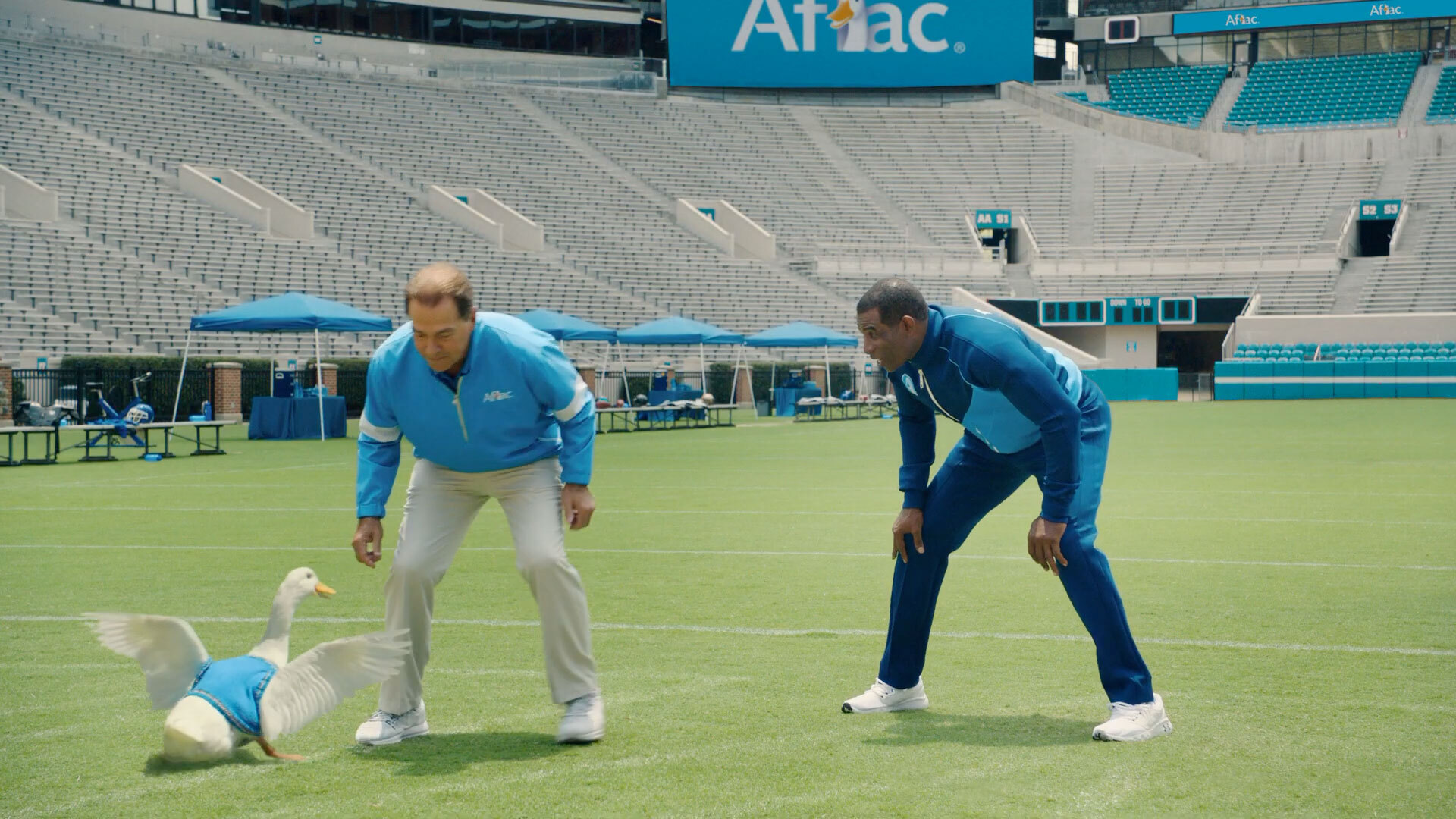 In his commercial debut for Aflac, Deion Sanders neither walks nor talks like a duck. Thankfully. But he does share screen time with the insurer's spokes-fowl—and Alabama coach Nick Saban, too—in a college football-themed campaign from creative agency Dagger.

As Deion meets duck, we get jokes about earning an "Aflacket" (aka, Saban's blue blazer, which he's worn in previous spots) and funky musical riffs from a marching band:

Next, Saban and the duck scrimmage on field amid quips about "wingspan" and "coverage":

Aflac What it Takes

Wait, 256 career wins and seven national championships as a college head coach, and he winds up staring down a duck as Deion Sanders quacks cracks wise? That's what makes America great!

Sanders and Saban seem to be having a grand time. It's certainly a kicky way to focus on closing the gap for customers with unexpected medical bills that health insurance doesn't cover.

As a bonus, Aflac is using the campaign to call attention to historically black colleges and universities, as well as communities of color. The band in the spot—"Flockwave and the Incomparable Tailfeathers"—features actual HBCU musicians and dancers. They perform a game-day arrangement of "Must Be The Money," Sanders' walk-on song from his playing days, an on-brand selection for sure. Also, the band uniforms, Deion's wardrobe and the Aflacket are customized designs that exemplify HBCU spirit, Aflac says.

The company notes that its commitment to diversity dates back to its first TV spot, "Park Bench," from 2000. Aflac cites the participation of director J.J. Adler from Ruckus Films and her multicultural crew in its latest work as an evolution of that stance.

"Coach Prime is not only a world-class athlete and coach, but also a father, teacher, and advocate for Black opportunity," says Dagger creative director Brandon Hampton. "He stands in the gap of education for HBCUs while Aflac stands in the healthcare gap for its policyholders."

As for Saban, "We got the G.O.A.T.," Hampton says. "He's straightforward, no-nonsense. How do you contrast that on camera with another personality? The name that bubbled and rose to the top was Coach Prime."

He adds: "The coaches had a chance to meet the morning before the shoot. It was so interesting to watch them interact with each other—there was an immediate friendship and the mutual respect was palpable. So much so, in fact, that when Coach Prime was called to set, he said, ‘Next person that interrupts me and Coach [Saban] while we’re talking football is going to get it!' We all cracked up!"

The ads will air on ESPN/ABC, the ACC Network, the SEC on CBS, and elsewhere, with social media support, and activations throughout the college football season.