'Always have a side hustle to keep you inspired' 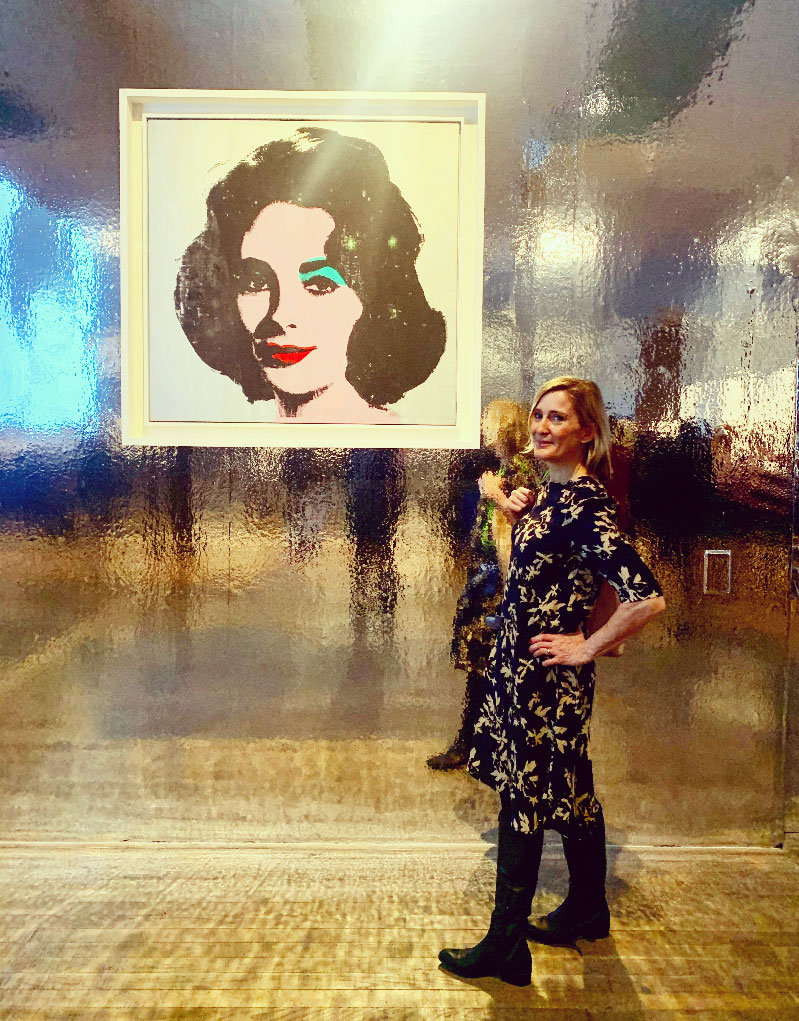 Reinventions profiles people who've made big pivots. Meet Lee Sharrock. Once a full-time PR head at Saatchi, she went freelance. By embracing that less "stable" path, she found ways to nourish her interest in meeting people from all over the world, and has also become a writer, art curator and overall champion of the arts, often alongside social causes. She also shares what pandemic times changed for her.

I was head of global creative PR at Saatchi & Saatchi between 2010 and 2016, and responsible for PR of their annual New Directors' Showcase in Cannes. While at Saatchi & Saatchi, I also curated a couple of art exhibitions, sat on the committee of the annual Macmillan Art Auctions, and contributed to several arts publications.

Making the decision to go freelance!

Going freelance. I realized that all the hard work I had put in over the years, and the connections I had made and nurtured in the art world and advertising world, were enough to give me a sound foundation for a freelance career.

Believe in your own abilities and trust your own instincts. Work hard, do your research, and deliver the work on time. Nurture your contacts and appreciate the people who have helped you along the way in your career. I've never liked the approach of being an aggressive PR person, I prefer to have a more subtle and quiet style, letting my results shout for me instead!

Also, I love writing about artists and exhibitions—it's not something I do for money (as, believe me, there isn't any money in it and I mainly do it for free!). I do it in my spare time because I enjoy discovering and writing about young and emerging creative talent, and visiting exhibitions.

Writing for arts publications keeps me creatively satisfied, and improves my writing abilities, which in turn enables me to write better press releases, because I can see creative work, such as commercials, from the POV of a journalist and writer. I think it's important to always have a "side hustle" to keep you inspired and creatively stimulated, and for me it's writing and drawing.

During lockdown 3.0 in January, I came up with an idea for a new column called "The Upcoming" and proposed it to Mark Westall, editor of FAD Magazine, an online publication I've been contributing to for years. Since contemporary art exhibitions moved online during lockdowns, I discovered some incredible young talent through Instagram, and have so far written about Travion Payne, Devon de Jardin, Celine Ali and Amy Beager. I love seeing what the next generation of talent is doing.

My good friend and colleague of many years Jason Romeyko was and is an inspiration to me and has always encouraged and championed me. I used to work with Jason at Saatchi & Saatchi, before I left and he moved on to become worldwide ECD at Serviceplan Group. Jason introduced me to Serviceplan Group, and I've been working with them several days a week as their international communications officer since September 2017.

I love working with the Serviceplan Group, and the international role is perfect for me because I enjoy working with people from around the world. I get to PR the best work from Serviceplan Group's Houses of Communication, in cities including Paris, Hamburg, Dubai, Berlin, Moscow, New York, Shanghai, Vienna, Madrid and Valencia. It's fascinating to gain such insight into the style of advertising and creativity in different cultures, and to understand why some campaigns and adverts have a universal appeal, while others possess elements that are totally unique to and crafted by the personal experience of a particular culture.

When the pandemic hit a year ago and Europe went into lockdown, everyone, apart from key workers, was forced to work from home. I think for some people who were used to office life, this was a difficult adjustment, but I was already prepared for WFH as I had been doing it for several years since leaving Saatchi & Saatchi. I had figured out how to be a master of time management and self-motivation. Working for yourself makes you self-disciplined, and I always set myself goals for each day and give myself a timetable.

Pre-pandemic, I was traveling a lot with Serviceplan Group, for team meetings in their Munich headquarters, to Cannes Lions and to the bi-annual Creative Summits where ECDs and CDs from the Serviceplan Group's agencies around the world came together in different cities to present their work. We had summits in Dubai, Paris, Vienna, Berlin and Warsaw, all locations where Serviceplan has Houses of Communication. As well as the working day of presentations, the CCO or ECD of the local agency would show us cultural highlights of their city, and we would break bread together and exchange ideas in the evenings.

Since the pandemic, the summits moved online and became "phygital" creative summits. These online summits have been a great way to continue communicating with my creative colleagues and see their work, although nothing replaces the enjoyment of sitting round a table with people in real life, and getting to know people from different cultures with different mindsets.

A positive thing during the pandemic has been the constant connection with my colleagues around the world, through weekly video calls and virtual team meetings. Prior to Covid-19, people weren't so interested in their colleagues' personal lives, but the pandemic brought out the humanity in business meetings, and we've all regularly checked in with each other to find out how people are doing, and what status the pandemic/lockdowns are in everyone's home city. It's been a supportive way of keeping connected while being productive at the same time.

Use past experience as building blocks for the person that you want to become. Learn from your mistakes. Celebrate your successes. But never go back.

During the past year of lockdowns, I became obsessed with drawing birds and butterflies with pen and ink and watercolor pencils. When I was younger, I went to art school for a foundation year, then ended up doing art history and Italian at University in London and Bologna. After I left university, I got a job at Sotheby's, then worked at the Institute of Contemporary Arts (ICA) and a couple of commercial art galleries. So I ended up writing about the work of contemporary artists and doing their PR (which was amazing, as I got to work with incredible artists and photographers like Bridget Riley and David Bailey), but I only sketched on holidays. During lockdowns, I rediscovered my love of drawing and painting, and found it was a really meditative process for me, which took my mind off the sadness and craziness of Covid-19.

As a result of spending so much time in my garden during lockdown, I began noticing how much more audible the birdsong was when there were no planes in the sky and minimal traffic on the roads. So I reconnected with one of my favorite Beatles songs from childhood, "Blackbird," and I guess you could say that was a bit of a mantra for my lockdown experience.

In my spare time, I curate exhibitions and write for arts publications. As well as being a regular contributor to FAD Magazine for several years, I contribute to Creative Review's "Creative Inspirations" column and have written for Soho House Magazine, Shots, F22/ STATE, Art India and Runway Magazine.

I've been working with Prettybird for a couple of years, spreading the word in the creative and trade press about their amazing roster of directors. I admire Prettybird executive producer and co-founder Juliette Larthe for the huge effort she makes to ensure inclusive sets and crews, and for the diversity of her roster of directing talent, which spans different cultures and genders. I met Juliette years ago while doing PR for Saatchi & Saatchi's New Directors' Showcase in Cannes and she was producing the NDS stage shows, and she has always been a great connector and champion of talent in all shapes and forms.

Another love of mine is curating, and I have curated several exhibitions with charities. Just before the first lockdown last March, I curated an exhibition and auction for children's charity Arms Around the Child, with a Christie's Auctioneer (Hugh Edmeades), guest curator Neneh Cherry and my good friend Bakul Patki.

During the first lockdown, when people couldn't go to museums or galleries, and the world was in an uproar about the murder of George Floyd in the U.S., I wanted to do something to show my support of the Black Lives Matter movement. I curated "United for Change," an anti-racism exhibition with Galstian Advisory LCC, last June. The exhibition was online at Artnet, featuring U.K. and U.S. based artists, including Maxim of The Prodigy, Misia-O', Hayden Kays and the late Jon Daniel.

The exhibition was an effort by myself in London, and Robert Galstian in L.A., to raise funds for the Stephen Lawrence Charitable Trust in the U.K. and the Underground Museum and For Freedoms in the U.S.

I'm also passionate about environmental issues, and after reading David Attenborough's new book, I curated "Re:Wild" with Daniel Syrett at Runway Gallery last December. ReWild takes its name from Attenborough's rallying cry to "rewild the world." He states in his book: "We share Earth with the living world—the most remarkable life-support system imaginable, constructed over billions of years. The planet's stability has wavered just as its biodiversity has declined—the two things are bound together. To restore stability to our planet, therefore, we must restore its biodiversity, the thing we have removed. It is the only way out of this crisis that we ourselves have created. We must rewild the world."

The exhibition featured environmental art and a percentage of proceeds were donated to Friends of the Earth.